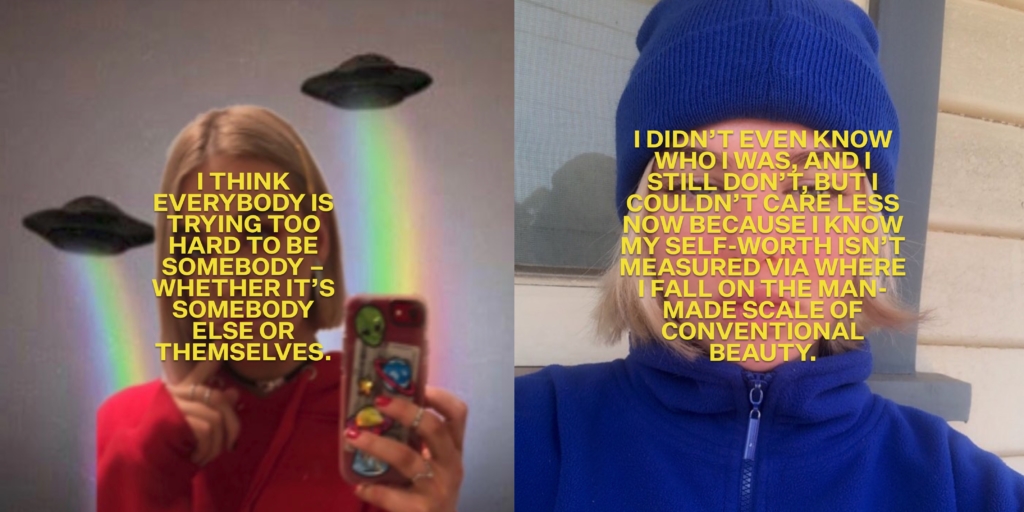 Call us high, but think about this: you’ve never seen your own face before. Pictures of your face? Yes. Your face in a mirror? Yes. A categorically unflattering version of your face when you open your front camera? Heck yes. But it’s dimension deprived. You’ve never, and you wont ever, actually see your own face. So why are we so obsessed with putting $300 creams on it, and serums with gold shavings, and oils that have been suffocated from fruits, and skin perfecting whatevers? It’s sort of like hanging artworks paint-side to the wall, or putting on a film and facing the other way. It’s sort of… all fluff. Enter Fluff, the Australian beauty brand who is dust busting the debris of our make-up bags. Within their community, they’ve identified that beauty is important — to celebrate but not define us — and what follows is a series of essays that explore how much it really matters.

The infatuation and fixation on our image consumes us. It becomes everything.

It’s comprised of things-that-are-normal-but-should-not-be-normal, like skipping class to self-tan, or waking at 5am to do a smoky eye before work, or having a glass of celery juice for dinner to fit into a dress.

We’ve all been there, and some of us are still visiting.

If we devote our time, money, and energy into our appearance, are we trying to change ourself, or enhance ourself?

Is obsession with self-image, self-love, or self-loathing?

I don’t have answers to these questions, and I’m not sure I ever will.

For a long time, I was under the impression that to be the best me I had to love myself, and that loving myself meant loving the way that I looked.

I tried it all, and became hooked, performing the physically manifested art of obsession religiously. You name it, it was a part of my ironically titled “Self-Care Routine”. From small and innocent acts like eyebrow tweezing, to soul-consuming behaviours like surviving on half of an apple a day just to sing *au revoir* to already non-existent love handles.

I was utterly obsessed with my image and how I appeared to others, justifying it by convincing myself that all of these torturous acts were simply making me become The Best Version of Myself. Think ‘Me’, but in bubble writing and doused in golden glitter.

But, rather ironically, I was blatantly rejecting who I was underneath the coats of coconut scented bronzy goodness and expensive high-coverage face paint.

I didn’t even know who I was, and I still don’t, but I couldn’t care less now because I know my self-worth isn’t measured via where I fall on the man-made scale of conventional beauty.

I learnt to love myself when I stopped caring who ‘myself’ was.

I think everybody is trying too hard to be somebody – whether it’s somebody else or themselves.

I can’t even fathom a world in which we simply did as we wanted and didn’t have it define us, but imagine how lovely it would be. I think it would cure the epidemic of obsession, like screaming your favourite songs as they play at top volume while you drive on the freeway with your windows down cures your soul. Or maybe that’s just me. Or should I say, Me.