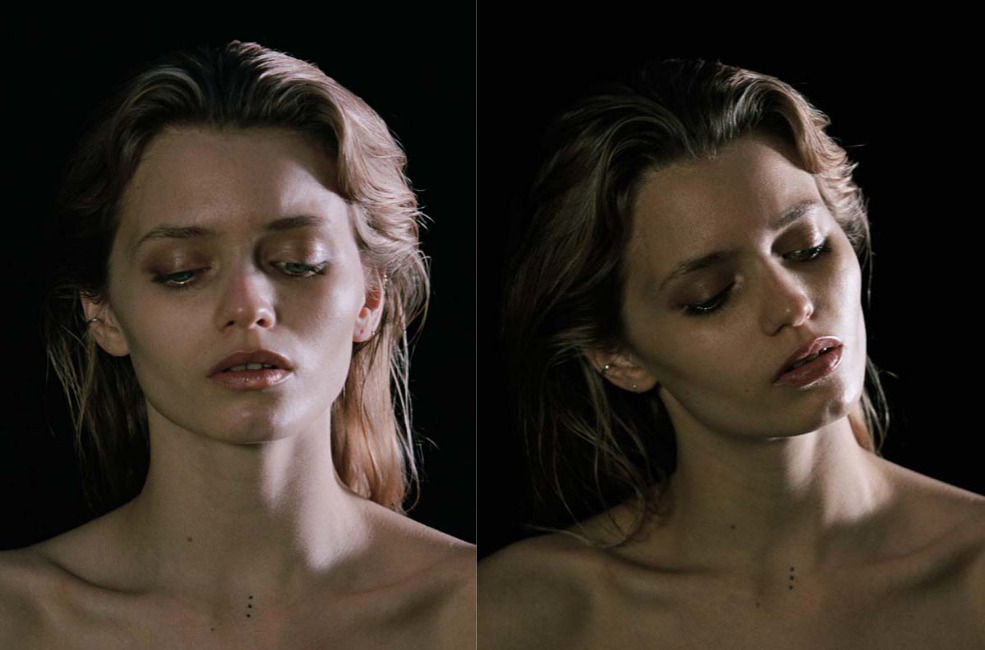 From Oyster 105: The Down Under Issue — out today!

Abbey Lee Kershaw and Bill Henson have more in common than well-known names — they are two humans bridging the gap between real life and fantasy, albeit in very different ways.

Bill is a visionary whose emotionally loaded photographs reveal an inescapable attraction to the sublime beauty of nature in all its forms — and the duality of that beauty: in each of his works there is darkness and light, loss and hope. While his portraiture suggests losing oneself in the moment, his landscapes convey nature’s inescapable transience, the inevitable and ongoing onslaught of time. The images are surreal, but the ideas they explore are at the core of the real human experience (he once described them as loss, longing, and love).

Abbey Lee is currently exploring this same emotional range through acting. She’s thrown herself into the unknown with her first filmic roles, in Mad Max: Fury Road and Gods of Egypt. Bill captured the actor for Oyster at his studio in Melbourne, and we caught up with her a few days later.

Zac Bayly: Are you calling from LA?

I saw you in Sydney last week just before you flew to Melbourne to shoot with Bill, and now you’re in the States again. Do you need to stay moving?

I don’t have any other choice. That’s the path I’ve taken in life. I just roll with the work that I get, and I really thrive on it — it’s the only way I function. If I’m in a place for too long I freak out. I book a plane ticket to anywhere [laughs]. I don’t think you need any expectations with life. You’re better off just to roll with it.

Did you enjoy working in the desert for Fury Road?

Ah, yes. For Mad Max we were in South Africa; we were in or near the desert for five months in Cape Town. It was a little bit like a passionate, tumultuous relationship. There were really ecstatic highs and really tough, grueling lows. It was a difficult shoot but it was also fulfilling and changed my life completely. I have a lot of love for that time. I made lifelong friends there — Riley Keough has become like my little sister and I’m really tight with Courtney Eaton too. We hang out in Bondi together.

Are you a nature person?

I’m not a city girl or a country girl. I flit between both. My connection with those places varies based on my mood. I love the Australian landscape, though. I haven’t been to the desert but I’ve spent a lot of time in the dirt and the water. I love the water. My emotions are probably exactly like the Australian environment: hot one day, rainy the next, you know?

Where’s your favourite place in Australia?

I love Sydney’s beaches. There isn’t anywhere in the world like that. Hmmm, except maybe Cape Town, but the water is terrifyingly fucking cold. I’m pretty ballsy when it comes to water but you actually feel like your skin is going to fall off.

Do you feel like a stronger person after doing these films? I imagine it must have been fairly nerve-wracking.

I just feel more whole. Like, I have no regrets for all the years of modelling that I did, but there was… It always left a void. This new adventure of acting that I’m on is just incredible. I can’t believe that I’ve found what I truly want to be doing. And it’s hard work — in a lot of ways I’m starting from the bottom all over again. I’m the newcomer! I’m having to prove myself and gain some trust, you know? It’s invigorating!

Do auditions terrify you?

Yes! I used to have such a tough time because I’d get so fucking nervous. I couldn’t sleep the night before! And now I feel like I’ve got this. It also depends on how close I feel to the role and how badly I want to be a part of the movie. You know, I haven’t done acting classes since drama at high school. I’m not opposed to getting coaching. I mean, I guess I got booked for Mad Max with no experience. It feels like acting is more instinctive. I’m just waiting for it to get to that point where I need training — I know I’m going get there because I’ve got a lot to learn!

I know what you mean. I’m sure for what you’re doing now you’ve got plenty of life experiences you can draw on.

Yeah. When you think about it everyone has felt every emotion on some level at some point in their life. And if you’re an observant person like me you can pick up even more emotional responses to things. But yeah — there’s lots more to learn. I’m working hard just to have a base of skills. With Gods of Egypt I know I got booked primarily because I fit the physical brief, but also because I trained in martial arts as a kid.

You can do martial arts?

Yeah! So I learned this thing when I was a kid and suddenly it’s useful again. I’m just going to try to keep learning about myself and the world and hopefully I’ll come out of it a good actor!

Are you a goodie or a baddie in Gods of Egypt?

You don’t know that I’m sexy.

That’s true — you could be like Charlize Theron in Monster.