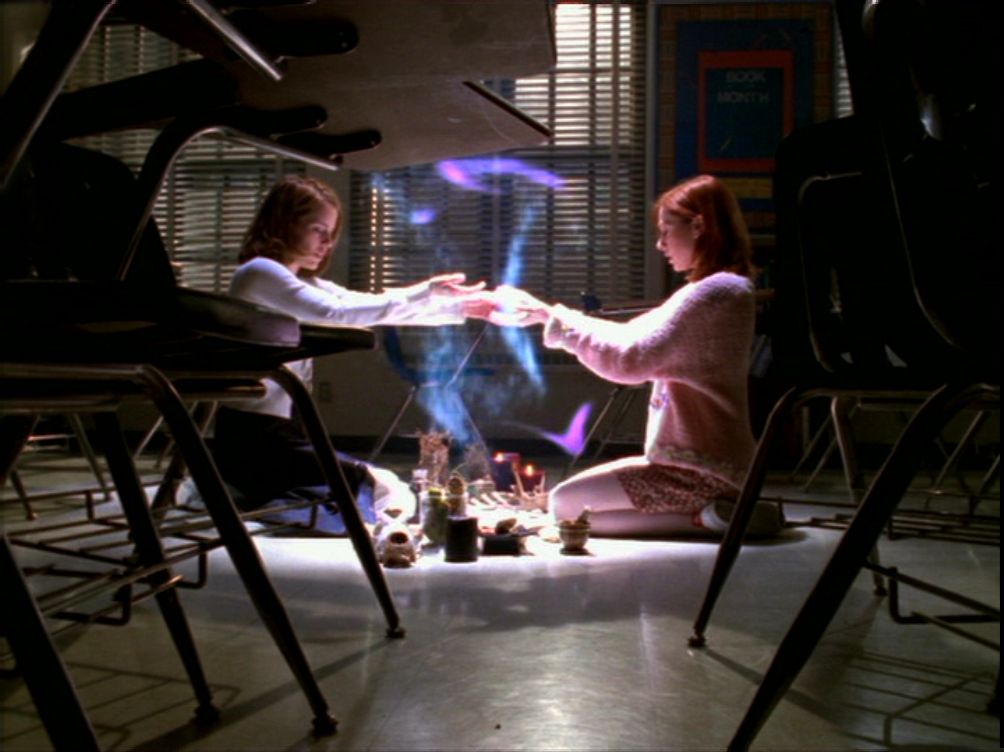 If you never cast a love spell when you were a teenager, you totally missed out. For Oyster #107: The Romantics, New York-based writer/cool gal Hazel Cills schools us on love magic and interviews some IRL witches about the dos and don’ts of spellcraft.

“Take a sip of my secret potion, I’ll make you fall in love,” sing Little Mix on their hit ‘Black Magic’. “For a spell that can’t be broken, one drop should be enough.” In 2015 the dream of a magic spell that can entrance a potential lover is as alive as ever. You would think by now casting spells on crushes would be a long-dead practice — with the click of a link or swipe of a phone screen anyone can find an enthusiastic partner for nearly any sexual or romantic pursuit. But this easy access has brought an almost clinical feel to dating, and effortless as it is to find a cute person to make out with, finding real love seems to be many times harder… which is where magic comes in. A little mysterious, a little unpredictable, and potentially a whole lot of a trouble, love charms and spells bring hopeful singles something beyond the spoils of apps and blind dates: something with magical potential.

The existence and use of love spells is rampant throughout history. The Ancient Egyptians tied scarabs into knots laid upon a man’s body in order to make his partner fall for him.* Ancient Greek men tortured clay effigies of bound, kneeling women while casting spells of passion.** In folk tradition, love magic manifested in many different forms, from menstrual blood in a man’s meal to sticking poppets with pins in order to bend a lover to one’s desires. There was also, of course, the love potion, or philtre, which when drunk caused the recipient to fall in love with the person who administered it. A medieval philtre often consisted of wine or tea mixed with ingredients such as mandrake root, orange, verbena or animal organs. More insidious components have also been recorded, from the blood of blind infants to samples taken from corpses.***

In artistic and cultural interpretations of love magic the process is always more simple than the spell books demand. In Shakespeare’s A Midsummer Night’s Dream, potions cause lovers to jump from crush to crush; in Tristan and Isolde the pair drink a concoction that ties their spirits together even after their deaths. In the modern world love spells and potions have popped up everywhere in movies and television shows, from The Craft and The Twilight Zone to the film Practical Magic, in which a young Sally Owens concocts a love spell for a man she knows will never exist (“He can flip pancakes in the air, he’ll be marvellously kind, and his favourite shape will be a star”) so she won’t fall in love.

Love magic continues to captivate people, sometimes with questionable results. Just this year The New York Times ran a story about a man tricked by a fortune teller into forking over $700,000 to help fix a romantic relationship using crystals, time machines, and reincarnation portals. Recently Etsy, long a digital marketplace for spiritual artifacts, banned the selling of spells. “Any metaphysical service that promises or suggests it will effect a physical change (e.g., weight loss) or other outcome (e.g., love, revenge) is not allowed, even if it delivers a tangible item,” reads the website’s guidelines. The question is, do these spells deliver real romance?

“I can tell you that they don’t work,” says Meagan Rosario, a practicing witch living in New York. “How do you ask the universe to move out of its way for your silly needs? You can’t.” Many practicing witches and magic enthusiasts assert that love spells simply do not succeed, and also that they’re largely regarded as unethical. “Nothing about them is consensual,” says musician and writer Suzy Hex. “I think any time you are asking the universe to do something to someone else, regardless of whether anything actually happens, it’s bad vibes,” says Katie Heaney, a writer responsible for Buzzfeed’s Witches Counsel advice column, in which Katie and fellow writer Arianna Rebolini recommend spells for readers with all sorts of needs, from fixing problems in a relationship to getting over heartbreak (or a hangover). “We’re all responsible for ourselves and we can’t control other people.”

belated rose moon ritual, better late than never. my favorite moon 💕🌕💕🌹💕 blessings to all of you

So what’s a person to do if they’re looking to use magic for greater romantic good? The answer is in taking the emphasis off of a single conquest and opening yourself up to attraction at large. Meagan recommends charms such as rose quartz, pink and red candles, and pink roses. “You foster attraction by feeling sensual, happy and confident within yourself and that’s what those charms can do.” she says. “The closest thing I’ve ever done was light a candle at the moon to attract love, and that works,” Suzy says. “But that’s more like setting an intention and opening up more to romantic opportunity.”

Katie recommends the same for her readers. “We had a young woman write in to help attract a guy who was her crush, and we wrote back and said we couldn’t do that,” she says. “What we think is more useful is a confidence spell.” The columnists carved a candle with the woman’s name and zodiac sign, added Wiccan symbols for connection, beauty and confidence, then whispered their intentions over the candle and let it burn through the night. “The most practical way of attracting someone you like is to be the kind of person who attracts people broadly,” she says.

It seems the best way of finding love through magic is to start with yourself. And yes, that might seem like a cop-out, but even if casting a spell seems like the most effective option, when other people are involved it probably isn’t the most sound — and nobody wants to be a bad witch, do they? So stock up on the red roses, light as many pink candles as you can, and wait for the moon to help foster romance and attraction in your life. Just stay away from the infant blood and animal organs, OK?