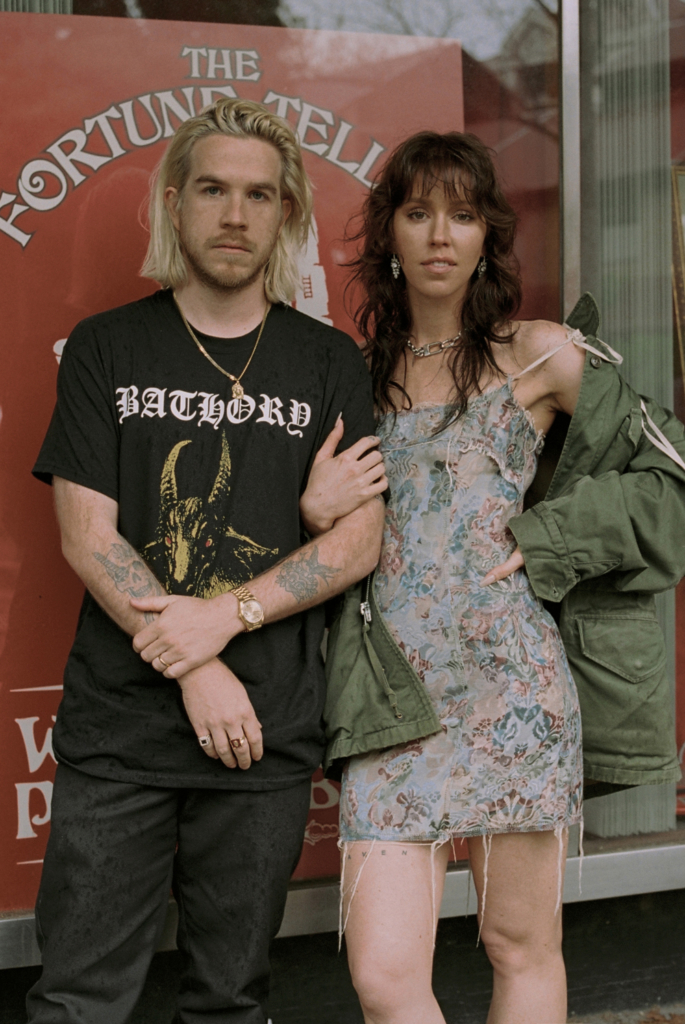 Aussie label Daisy is all about making romantic clothes for modern ladies. For Oyster #109, we caught up with Daisy design duo/chill couple Renee and Gibson Fox to talk their fave girls, humanist theory and scary movies.

Reclining in a half-undone silk dress with a pomegranate held suggestively between her legs, or posing for a selfie in her bedroom mirror wearing a ruffled top and underwear, the Daisy girl exists at the intersection of fantasy, femininity and the internet. Renee and Gibson Fox are the multi-talented recently married mates behind the label, having worked on photo, video and styling projects together as Feel The Future before pursuing their own clothing line. After only two collections, their unique vision has already caught the eye of influential women such as Petra Collins and Arvida Byström along with visionary retailer Opening Ceremony.

Ava Nirui: Tell us the Daisy backstory…
Renee Fox: Gib and I have been working together in different roles in fashion for about ten years. Since we graduated we’ve worked in an array of different positions — design and photography, art direction, illustration, pattern making and the technical side of garment creation, writing (I was writing at Oyster), publishing and beauty. We made a point of learning as much as we could until we felt like we had accumulated so much knowledge that we could do something on our own. We always wanted to work for ourselves and Feel The Future was an early stage of that. We were really experimenting … doing lots of collaborations with other people and seeing what we liked. From there we decided what [our label] was going to look like and who we were [as designers].

Were you surprised when it started to take off?
RF: We didn’t think of it like, “Here we go, this is our new business and our future.” It was just going to be a creative outlet to balance out the projects we were doing for other people where we felt like we didn’t have our own voice. When it came out we were busy and didn’t really have any expectations of what it was going to be.
Gibson Fox: But then Opening Ceremony contacted us in our first season…
RF: And we realised this could be something bigger and we grew our international profile. That’s when we set aside the other things and decided to really focus on Daisy.

Did your experience in other disciplines help?
RF: Yeah definitely, everything we did along the way put us in the position to do what we are doing now. That’s what we really value about Daisy: we can do a lot of it ourselves and what’s coming out of it is our true vision.
GF: We are doing it from start to end. When we are designing it we know how we are going to shoot it. We’re not like, “I hope the photographer or stylist gets our ideas.” The great thing is we don’t have to compromise our vision.

The collection themes are very developed. What went into creating the Human Emotion collection?
RF: We had been looking at a completely different period of time and various philosophies in the era between the 14th to 17th centuries, where mankind’s perspective had shifted. Modern ideologies were shaped in that period. In addition to our interest in changing perspectives, we looked at the art, colour palette and fabrications, so we wanted to intertwine those ideas throughout the collection.

How literally do you take the historical research?
RF: I suppose we drew on it a lot in terms of the colour and fabrics, but we tried to make the silhouette and visuals into a wardrobe for a modern woman.
GF: We want girls to be able to wear it and not feel like they’re playing dress-ups.
RF: We didn’t wanna go fully down the Renaissance costume route, but still [wanted] have a strong representation of the era we were looking at. Humanist theories were inspiring and we did research into that — it was more about the ideologies, not so much about the actual way people were dressing in those eras.

You talk about the ‘Daisy girl’ a lot. Who is that?
RF: Our group of close friends inspire us the most. Our favourite thing to do is a soft launch when the collection’s finished. We have the girls over and let them go wild with the range — it’s one of the most exciting things ‘cos they style things up and interpret it in their own ways. From this abstract vision you see it becoming real.

You play with darker themes in your collections, too…
RF: We want to represent the different elements of being a modern woman. It’s like we’re bringing together two extremes — vulnerability and softness with sexuality and strength, and I think combining them is what creates a fresh and contemporary look. We wanted Daisy to be a combination of ideas and aesthetics. Petra Collins and Arvida Byström have endorsed the brand.

How important is it to be associated with girls who have a voice in politics, art, feminism?
RF: We saw an article recently that suggested we were paying people for posts and they obviously didn’t know [Daisy is] a startup of two people. It was upsetting from our perspective but also upsetting to imply that people like Petra and Arvida are for hire. The fact that people we respect so much and adore would reach out and express that the feeling is mutual is one of the best things about what we do.

Your next collection is going to be true-crime related…
RF: Heavenly Bodies is about the fantasy of fear. We saw a common theme in the way women had been depicted in iconic horror films like The Amityville Horror, Rosemary’s Baby, Nightmare on Elm Street and Halloween — their purity and fragility. We wanted to break apart the suburban nightmare and explore what makes that setting so thrilling. We started looking into the events that inspired some of these stories and the killers themselves: Richard ‘The Night Stalker’ Ramirez, Charles Manson, Jeffrey Dahmer and Ted Bundy. Comparing the real crimes with the cinematic recreations and studying the motivation behind murder, the romanticism of violence, a fascination with death and what lies beyond…