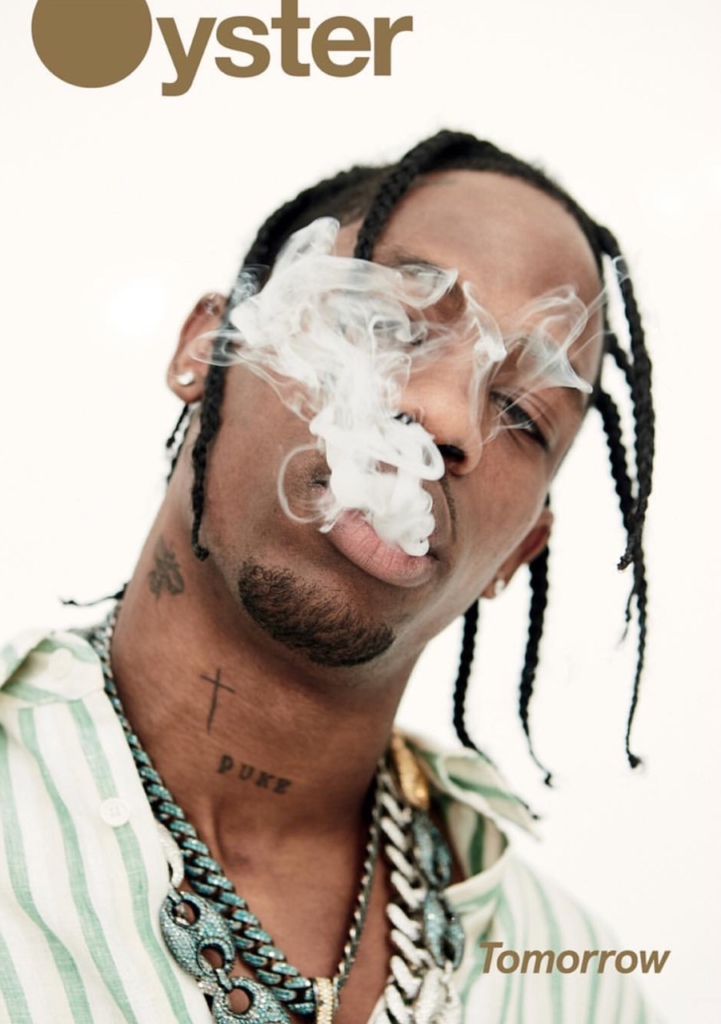 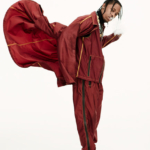 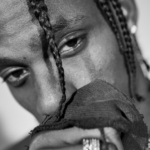 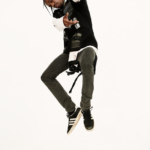 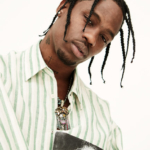 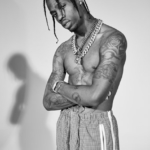 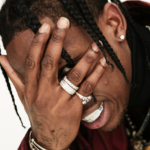 Oyster #109 cover star Travis Scott is leading a generation of turn up musicians while keeping it real/real lol on the internet. We sat down with the trap lord to chat about connecting with kids, why couches are better than beds and the future of creativity.

“LIT!” yells Travis Scott at one point during our interview, underscoring the fact that he’s a product of the internet. Phrases like “it’s lit” (which appears on most of the tracks on his US number-one album, Birds in the Trap Sing McKnight) and “fire” have become a cultural code, absorbed by the web and radiated out to the IRL world. We’re witnessing the dawn of the Church of Travis Scott — a religion whose leader helicopters into Alexander Wang parties and once pushed through the crowd mid-performance to spontaneously climb a tree. Yet the man I find myself sitting next to is surprisingly humble, genuine and low-key, one of the rare artists who runs their own Facebook page (regularly posting zingers like “If ur battery last all day u ugly”) and who still prefers to sleep on his couch.

Lindsay Cornell: What’s inspiring about you as an artist is the way you marry music with culture, creativity and merchandise. Is it enough for a musician these days to be just a musician?
Travis Scott: In my mind, no. I feel like there’s more to music. And usually with good musicians or artists it comes together effortlessly. Whether it’s fashion or creative…

Before Scott can finish his sentence, Jaden Smith appears out of thin air, walking up to us as Scott enthusiastically greets him with a “What up, fool?” Smith quickly realises he’s interrupting an interview and moonwalks backwards while apologising profusely, telling Scott he’ll catch up with him later.

I feel like you and Jaden speak your own language.
Exactly! He’s one of them dudes that can’t just be a musician, can’t just be an actor, can’t just be a skateboarder, you know what I mean? He’s gotta do all of it. I feel like that applies to me, too. I’m not into just one thing; I always felt like I had to have my hand in everything revolving around what I do, whether it’s directing videos, making beats, making music, performing… I feel like everything needs to be stylised; that’s always been my mindset.

Is that what you were trying to say on ‘Lose’ with the lyrics “More to gain, more to lose”?
Yeah. And my whole thing is like, in that song, “Man, I have so much right now, and I feel like if I was to make the wrong decision I could lose it all.” I feel like that applies to all the young niggas out there right now. Even creatives and brands, if you make the wrong move your whole brand is fucked!

Do you think technology is helping or harming creativity?
I think it’s helping, because artists are making music so fast they want to put it out quickly, and now streaming and digital access allows us to. The creatives are so lit. [Laughs] Literally, LIT!

Is the establishment still going to be necessary, then? Like Apple and iTunes?
Yeah, man. I love my label; I love the establishment. It’s always going to be a give-or-take, but it’s how you adapt to it that’s the main key. Some people are so standoffish. But that’s why I was so happy with Apple being so open with my ideas with this album. It was like, “Whoa!”

You’ve said the title of your album, Birds in the Trap Sing McKnight, relates to the idea of being trapped socially. What are you wanting to say to that kid in the middle of nowhere, trapped in the suburbs listening to it on repeat in his bedroom?
I’m living proof. I’m from Missouri, Texas, a little suburb where there’s no record label — you can’t just walk up to the record label. It’s not a New York, it’s not an LA; it’s at the bottom of the map. And I’m living proof that there’s something down there and that they’ve got a vibe and inspiration. Texas is a major inspiration — the landscape, the culture, the rodeo. All that is incorporated into what I see nowadays. What people think is fashion, that’s just everyday lifestyle there.

Vetements stylist, Lotta Volkova, said recently that: “Obviously there are no subcultures to be discovered anymore … It’s more about the remix of information. Kids today — the new generation — they think in different ways. They don’t even have the knowledge of what a subculture is. It is not relevant to them.” Would you agree? I feel like you kind of embody that…
Exactly. As kids we were only able to grow up on shit we’d seen before, whether it’s the Warriors movie or a Stanley Kubrick movie or even a John Hughes movie like The Breakfast Club, so of course we aspire to bring that back in our own way. I’m a big Kid Cudi fan and I feel like he set a foundation — aka the Moon [album] — for me to have a playing field, and as an artist I just wanted to figure out how I could have my own moon. I followed what he taught me and made my own planet.

Kid Cudi is obviously going through a really rough time right now [Cudi revealed on Facebook he had entered rehab after grappling with anxiety and depression] and he’s used his public persona to speak about that. Do you think social media helps when it comes to raising awareness around social issues?
Sometimes digital can have people look at your situation differently. I look at Kid Cudi doing that and that’s my idol, I love him. I think people may be looking at him thinking he’s lost right now, but I feel like he just wants to get his mind right before this new album comes out. He wants to make sure he’s mentally right, I guess.

And that’s brave!
It’s brave to me. That takes a lot. Not anybody could just own up and say, “Yo, I need to get my mind right.” He’s one of my mentors. I respect that. His new album is fucking fire; I heard it. I’m actually on it. It’s like the illest Cudi we’ve always known, with the illest beats of the next two years.

Do you feel like you need to have a certain kind of persona on Instagram, Twitter, Snapchat?
My whole thing is… my Instagram should be me. I’m really laidback, chilled, and I post when I want. That’s just who I am. I’m not really a flashy type of nigga, as far as flaunting and shit; that’s not my whole vibe. So I kind of look at my Instagram and Snapchat as a way to show people the little shit I fuck with.

What do you think the future is when it comes to the intersection of art, fashion, music and technology?
Oh man, I think that’s like the front line. Architecture, technology, apps — very accessible things right now. In the next two years that shit’s just going to keep evolving. Like design, fashion, that shit is back on the front line like it was in the 90s, like it was in an earlier time when it was fire — popping. It’s back on that shit now: more young designers, shit is becoming more easy and just… dope.

You’re a big Raf Simons fan. He has said: “I don’t want to show clothes, I want to show my attitude, my past, present and future. I use memories and future visions and try to place them in today’s world.” Do you think you have a similar sentiment with your music?
Yeah. That’s that skateboard talk, man; that’s skateboard talk right there. That’s exactly how I feel, you know. It’s kind of like… it’s not even about the clothes, man. It’s not even about the skateboarding. Niggas just skateboard to get from A to B. That’s niggas’ transport, that’s niggas’ connectivity, that’s niggas’ therapy. Like the clothes, it’s just therapy. He just wants you to see the pain — the graphics and design. That’s just where his mind is.

What would be your dream partnership within the design, fashion or tech worlds?
Oh man, that’s a hard question because there are so many people. But I’m going to start with Helmut Lang, hint hint. [Laughs]

Who do you consider to be the true creatives in the world?
Films, man. Directors.

You worked on Cruel Summer with Kanye — how involved are you in his next project, Cruel Winter?
Oh, I’m executive producing it!

Where’s it at?
It’s coming soon. We’re putting it together now. We’re just working to make it good. I’m not even trying to make it overly thought-out shit. I think it’s just good material, ill artists. It’s so much fun. I’m glad my album is out now so I can focus on that.

And will there be a film element to it?
Yeah, of course, man. Of course.

I heard a rumour that before Kanye picked you up you were living out of your car. Is that true?
[Laughs] Yeah, it was crazy. Me and my homie Jason, we were both just trapping out of that whip. It was just a time when I was mad hungry like I am now. I still sleep on my couch at my crib even though I have a bed.

[Laughs] Why?
I just like the couch. [Laughs] I love my couch. You know, those were the most fun times. We never knew what the outcome was going to be, whether it was going to be a let-down or good news. Just achieving the goal, just making it out of that. And now we’re here — we on Oyster now! I remember going into the delis in New York and looking at [the magazine] and shit. It’s like, damn!

If you were to leave one message for your great-great-grandchildren, what would it be?
I’d be like, “In your life, cut the bullshit. Don’t focus on the bullshit, focus on what’s needed. Focus to inspire. Make your intent to inspire. It’s not about the money. Inspire first, that comes with money. And stay true to yourself.” 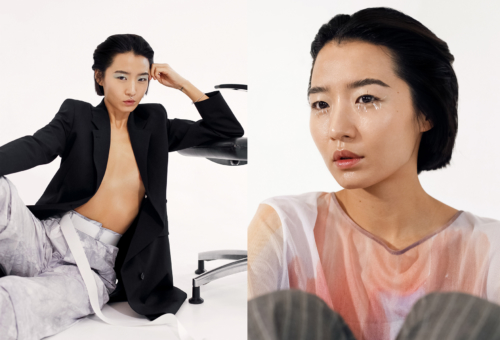 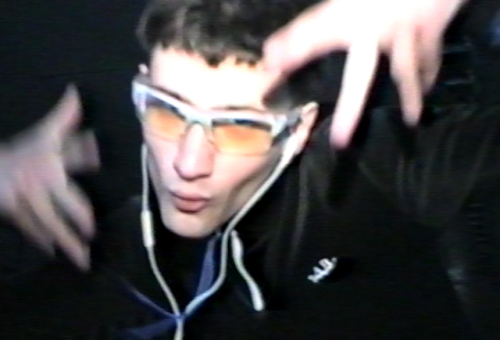 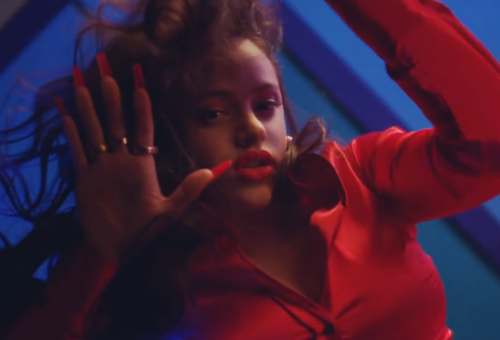 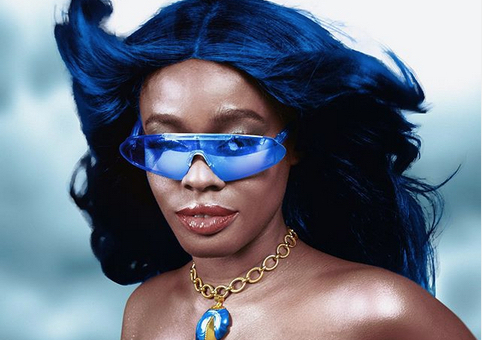 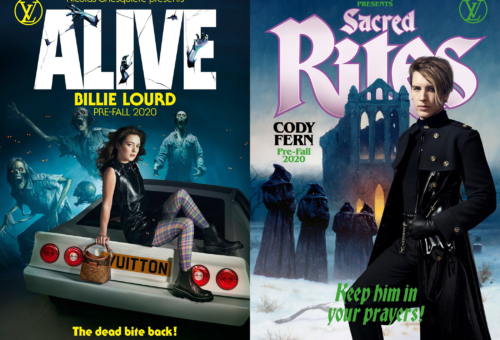 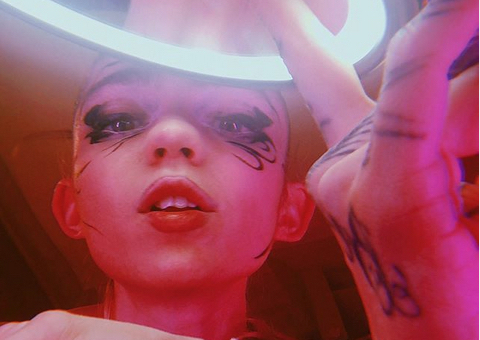