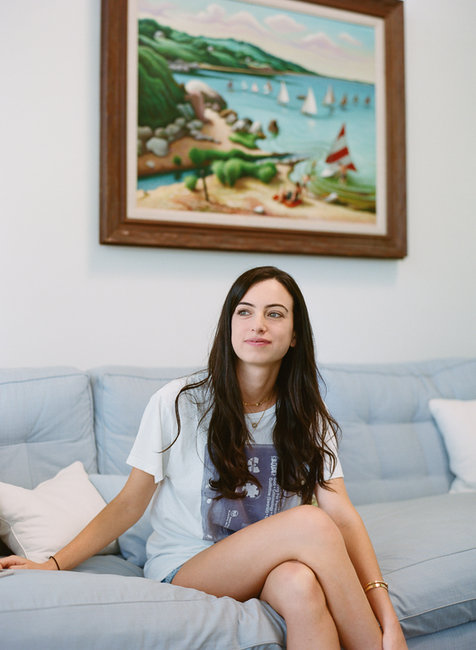 Cazzie David is Larry David’s daughter, sure, but she’s also her own little human unit who is quick and dry witted, normal-ish and disgustingly clever. And aside from her self-proclaimed inherited neurosis and unique social skills, it turns out she’s a solid chiller to talk to — especially when the heavy and paralysing topic of “the future” and “tomorrow” is brought up — and quite passionate when it comes to pyjamas, breakfast, hating memes and dying in her sleep. Plus, she’s written a goddamn screenplay!

Hayley Morgan: Hey Cazzie, what have you been doing today?
Cazzie David: I’m currently fighting a cold so all I’ve done this week is drink tea. I think I’m four gallons in right now.

What are you (always) putting off until tomorrow?
Right now it’s scheduling a dentist appointment.

Who’s the funniest person you know (pretend your dad wont ever read this)?
My dad. My boyfriend and my friend Kyra Kennedy.

While we’re on that, let’s get it out of the way: how’s being Larry David’s offspring working out for you?
I’m surviving. I’ve unfortunately inherited all of his neurosis and social skills, so you can only imagine how pleasant of a person I am to be around.

Is it true that you only/mostly wear pyjamas?
Yes! I only put on actual clothes when it would be too alarming not to. I think the world needs to come together and make pyjamas the only clothes available. Then, pyjamas would be normal clothes and normal clothes wouldn’t exist anymore and we’d all be comfy all the time and I would really appreciate that, everyone. 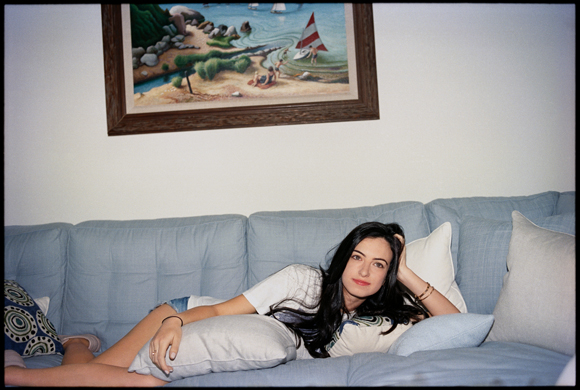 You also seem to be really good at breakfast foods, do you wish life was a perpetual new day/morning?
No that sounds awful, every morning I’m disappointed that I missed my chance to peacefully die in my sleep. But yeah, breakfast foods are the shit!

How do you feel about the future?
Terrified about it 24/7.

What are you most interested in/excited about right now?
I just finished writing a screenplay so I’m excited to see how it plays out!

What are your thoughts on the current political/economic climate?
Well the economy has improved under Obama but the political climate has clearly never been worse. The election result has left me deeply disturbed as it has untold millions. Every aspect of it is hard to fathom but I’ve been trying to read as much as I can about it to stay informed so I can act diligently and accordingly. There is so much at stake so there has never been a more important time to be engaged as a citizen, except for obviously before the election…

What are your fav things on the Internet?
Not memes. I’m kind of ashamed that it’s the humour of my generation. I saw one the other day that was a picture of two dogs and the caption was, “when a guy won’t stop creeping on your friend at the bar.” Like no, they’re just two dogs sitting… Why is that funny!

What characteristics do you believe define your generation?
ADD, entrepreneurial, really into the 90s?

What are your thoughts on dating and relationships in the internet age?
It definitely can create misunderstandings. The things you can find on social media can really get in your head and mess with your perception. I think if Instagram removed the activity feed page, it could help save a lot of relationships!

Which country do you think is most progressive and why?
The Scandinavian countries because they’re social democracies and care about their citizens.

How would you describe your belief system?
Unrepentant cynic.

Are there ideas and values from decades past that you would like to see resurrected for tomorrow?
Bipartisanship.

What do you hope humans will achieve within the next 50 years?
Solve the climate crisis. I hope there will be a complete redo of our energy system, no more coal and fossil fuels as well as massive agreements and progress with India and China. I’ve been programmed by my environmentalist mother.

If you became a parent, what would you want for your children’s generation?
For curly hair to come back in style. Those kids are for sure gonna be curly and I don’t want to put them through the mild pains of managing it.

Do you have any advice/a few simple rules the world could follow to have the chillest tomorrow possible?
I’m the most anxious, least chill person ever so no, I have no advice. Pop a Xanax? I don’t know. Can you give me advice?