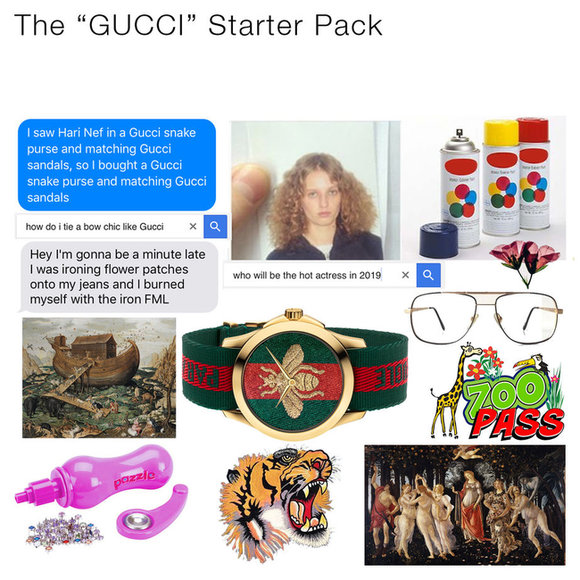 So Gucci’s new social media campaign is memes. The label has tapped a bunch of internet heroes and artists to collaborate on, essentially, dankness.

#TFWGucci Milan-based art collective (@checking_invoices) is composed of a stylist, photographer, and video-maker. The result of their collaboration is a parade of also-anonymous figures — dressed in monochrome bodysuits, or with their heads blocked out — cavorting in the world of fashion. For #TFWGucci, one of the figures is cloaked in a #Gucci bag, hiding their identity, but with three #LeMarchédesMerveilles timepieces on their wrist. @youvegotnomale completes the image with a caption. - Text by @kchayka. Read more through link in bio.

The campaign is introduced on the website with a little history lesson: “The word ‘meme’ was coined by the British biologist Richard Dawkins in 1976 to mean an ‘imitated thing.'” Followed by an explanation of what a meme is in 2017 — weird but maybe necessary for the large majority of who can actually afford a Gucci wardrobe (old people).
“To launch the new Le Marché des Merveilles collection of watches, Gucci commissioned international artists curated by Alessandro Michele to develop original imagery.” The website reads. “The images were then given to a new class of viral creators already famous on Twitter and Instagram to turn into new memes. The result is a curated collection of captioned art designed to help viewers express themselves online. Adapted from a popular meme, That Feeling When Gucci is about the moment of putting on one of the watches, when the world suddenly becomes different and time slows down a little bit.”
https://www.instagram.com/p/BRvgCaolo9F/

#TFWGucci The work of LA-based artist @amanda_charchian is characterized by her uniquely female-focused approach to the Surrealist tradition. With mysterious, witchy characters—think a crystal-incrusted spider sculpture that trembles in the wind, or a circle of ginger women linked together by their braided hair—they’re impossible to forget. It’s no wonder that her career spans both the fine art and commercial fashion world, and has included both gallery shows and editorial commissions for Vogue Italia. Her collaborative memes for #TFWGucci with the hilarious @textsfromyourexistentialist create a feminine duo: sensual, funny, and unapologetic, with an underlying darkness from the eponymous philosophy. - Text by @tatianaberg. Discover more through link in bio.

#TFWGucci Social networks are our everyday vernacular, creating endless archives of images that are entertaining, disturbing, or titillating. @meatwreck, a collaboration between artists Mitra Saboury and Derek Paul Boyle, enlivens the digital stream with their own blend of organic and surreal imagery. A foot sprouts plants, a piece of meat is framed, or a woman sleeps between mattresses instead of on top. Inspired by @beigecardigan, the duo pictures a #LeMarchédesMerveilles timepiece for #TFWGucci bursting out of the wearer’s suit. ‑ Text by @kchayka. Discover more through link in bio.

Debuting #TFWGucci (That Feel When Gucci). The House’s new collaborative art project in the digital space is a lineup of memes featuring the new #LeMarchédesMerveilles collection of watches. Kicking off the collection of original memes is LA-based artist @amanda_charchian’s collaboration together with @textsfromyourexistentialist. Discover more through link in bio.