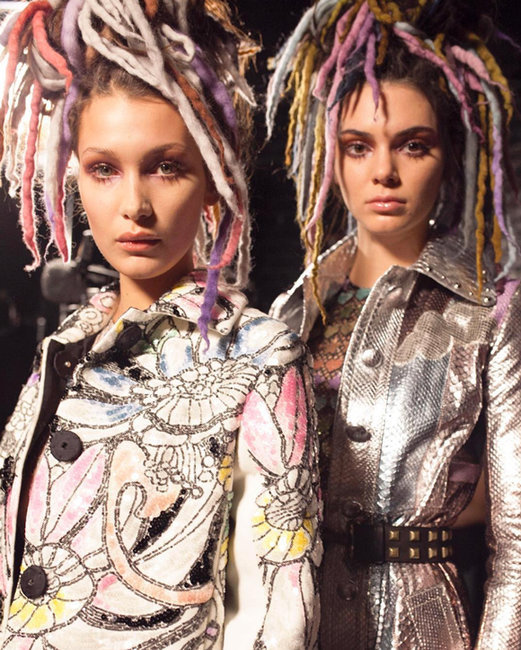 For his Spring 2017 show, Marc Jacobs sent a bunch of models out with pastel dreads. Ahem, Marc Jacobs sent a bunch of white models out with pastel dreads. The internet immediately told him what was wrong with that.
He then responded, a little too quickly, with: “And all who cry ‘cultural appropriation’ or whatever nonsense about any race of skin colour wearing their hair in a particular style or manner – funny how you don’t criticise women of colour for straightening their hair.” And so on.

#MarcJacobs is being criticized for using white models with dreads for his #NYFW show.. Well he's clapping back ! What are your thoughts on his response? #ClapBackSeason

https://www.instagram.com/p/BKgYwsuBHWE/
Then, he shared an article from the Washington Post, which said that the dreads were referencing punk and Lana Wachowski and Boy George. It said the inspiration was legit so that equalled zero disrespect. It was weird.
Today, in an interview with InStyle, he has reflected further on the sitch. “Maybe I’ve been insensitive,” he says, next to photos on himself with hip hop icons such as LL Cool J, Salt-N-Pepa and Kurtis Blow, who’re wearing his ‘Respect’ collection.
The full quote: “What I learned from that whole thing, what caused me to pause after it died down a little bit, was that maybe I just don’t have the language for this, or maybe I’ve been insensitive because I operate so inside my little bubble of fashion.”
He also says: “There seems to be this strange feeling that you can be whoever you want as long as it’s ‘yours,’ which seems very counter to the idea of cross-pollination, acceptance, and equality. Now you can’t go to a music festival with feathers in your hair because it’s cultural appropriation.” Oh… Marc…
Reflecting on Marc’s ‘Respect’ collection, LL Cool J tells InStyle, “There’s an argument to be made that we should all be free to express ourselves, but I think it’s good when you include artists who lifted the culture up. This is great, because instead of Marc just running with the culture, he’s grabbing some people who are official and a part of that, and I think he should be commended for it. Instead of appropriation, it’s a collaboration.”