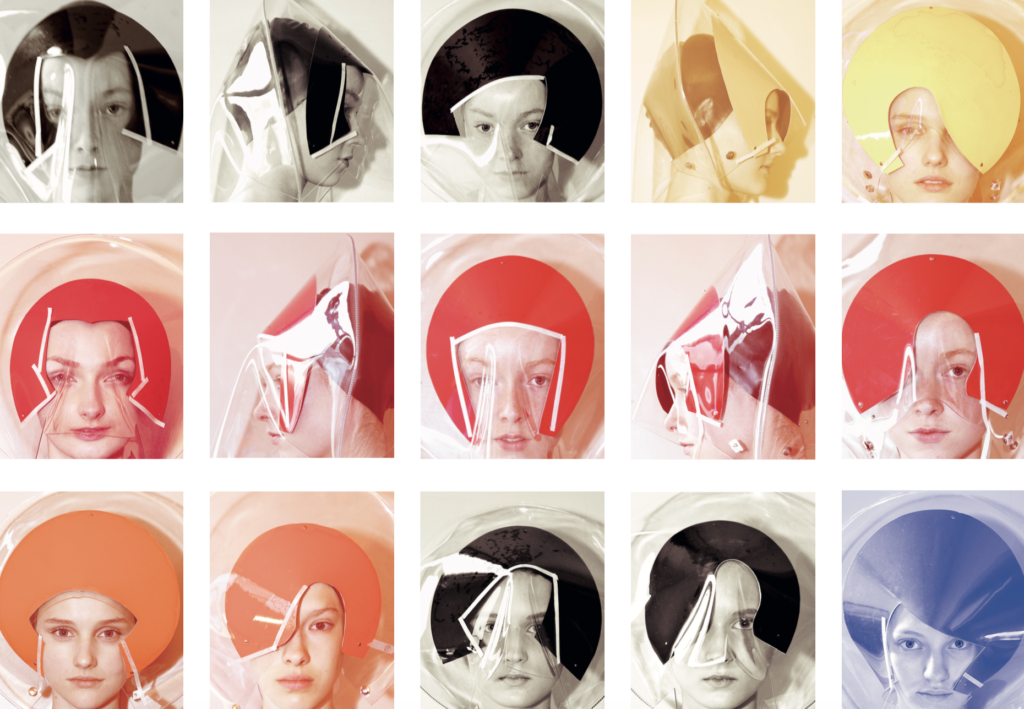 Tomihiro Kono might be a headpiece designer, but he’s not definitively in the business of accessorising. Rather, Junya Watanabe’s nine-time runway collaborator is intent on using his sculptural coiffures to build fully-formed characters — characters that are “thorough”.

Many of Kono’s head props are conceived at the juncture of fantasy (leisurely) and mathematics (laborious), revealing both blue-sky and meticulous processes. A cross-section of his CV reveals disparate possibilities: pierced leather in archetypal bondage style; Elizabethan era frivolity; the droll surrealism of René Magritte; and the follicular decisions of English new-wave band, A Flock of Seagulls.

Kono doesn’t dance near any preoccupation with the sparse and minimal. The Japanese artist offers a counterpoint that isn’t underpinned by the culture of aspiration — the stuff of beauty vloggers and Instagram tutorials. He’s interested in the spectacle — which on the runway is most often relegated to the body and the garments — and a sweeping cohesion that corporate marketers might tout as the 360-degree brand experience. Jargon notwithstanding, Kono says, “Hair design takes such an important role in making complete characters and to give a certain impression to the viewers. Building a thorough character is something I’m so into, especially when I work with brands with strong concepts and aesthetics.” 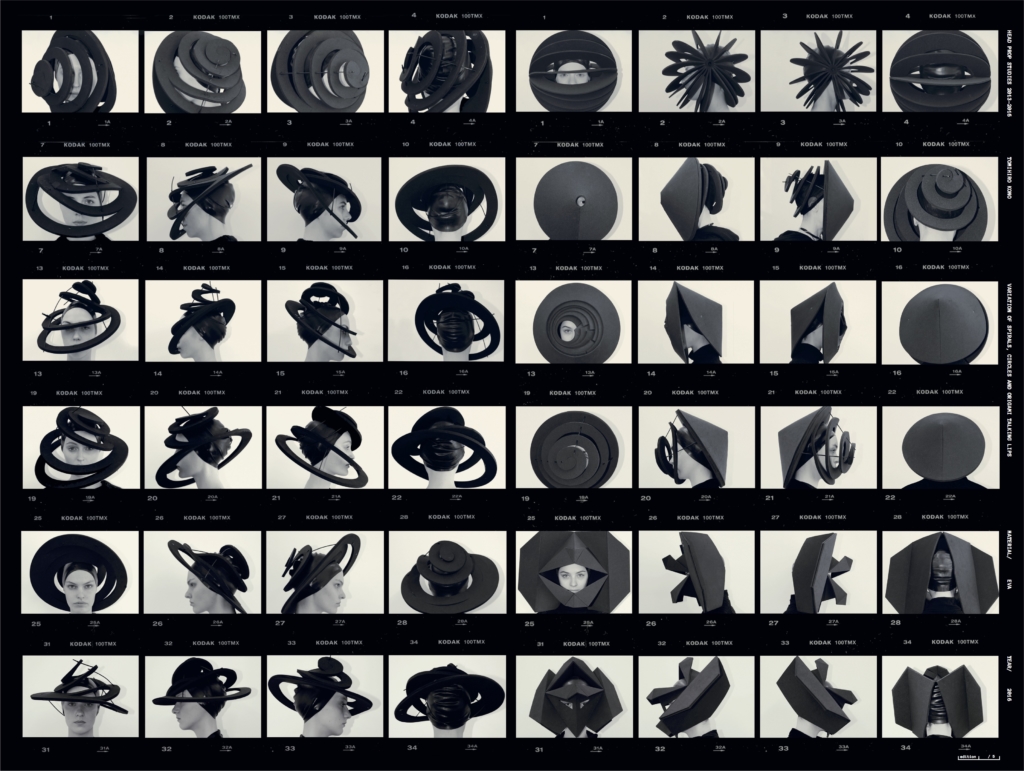 Welcome to the stage, Junya Watanabe: a man deeply entrusted to the realm of theatrics. When Kono engineered head props for Watanabe’s Fall/Winter 2015 presentation, their debut collaboration, I’m certain spectators hypothesised about Watanabe’s foray into headwear — so fluid was the affair. Kono’s work up top serves conceptually rather than clinging passively on, making him relatively peerless in his practice.

“I was free to propose whatever I liked and [Watanabe] either chose the best of my proposals or we discussed and evolved [the ideas] as we went,” he says of their work together. To round out Watanabe’s offerings — a feast of excruciatingly laboured pleats and folds, and serrated reptilian silhouettes — Kono seemed to reference semi-stretched accordions and the preposterous guard hats of Buckingham Palace. At times the headpieces resembled shark fins: charred, fanned out in perfect ovals that jutted very far into the wearer’s peripheries. Elsewhere, it was a spherical structure: very large and manifold, best visualised as an oversized origami rose fringing the circumference of the wearer’s face and almost, but not quite, obscuring her view. For his final trick, Kono diluted the conceptual quality, dressing heads in permutations of a short inky asymmetrical wig.

Onlookers might wonder — distressed or incredulous — about the materials involved in Kono’s head props, extending warm regards and well wishes to the necks of his models. Surely the more elaborate ones are not easy to hold up?! To sidestep injury and other site-specific concerns, he confirms extensive planning phases: “I had to consider long, strong, bendable materials to create the beautiful layers of arcs. They also needed to be light to stay on the head and thin so that they could be bound at both ends with metal screws.” For the frenetic toggling between looks — on-off-in-out-over-under-through —add “easily attachable and detachable” to the checklist of non-negotiables. The numbers involved in such precise preparations, however, are the sort of punctilious calculations that are irksome for a person with limited fluency in geometry— “I am not so good at math,” he admits. 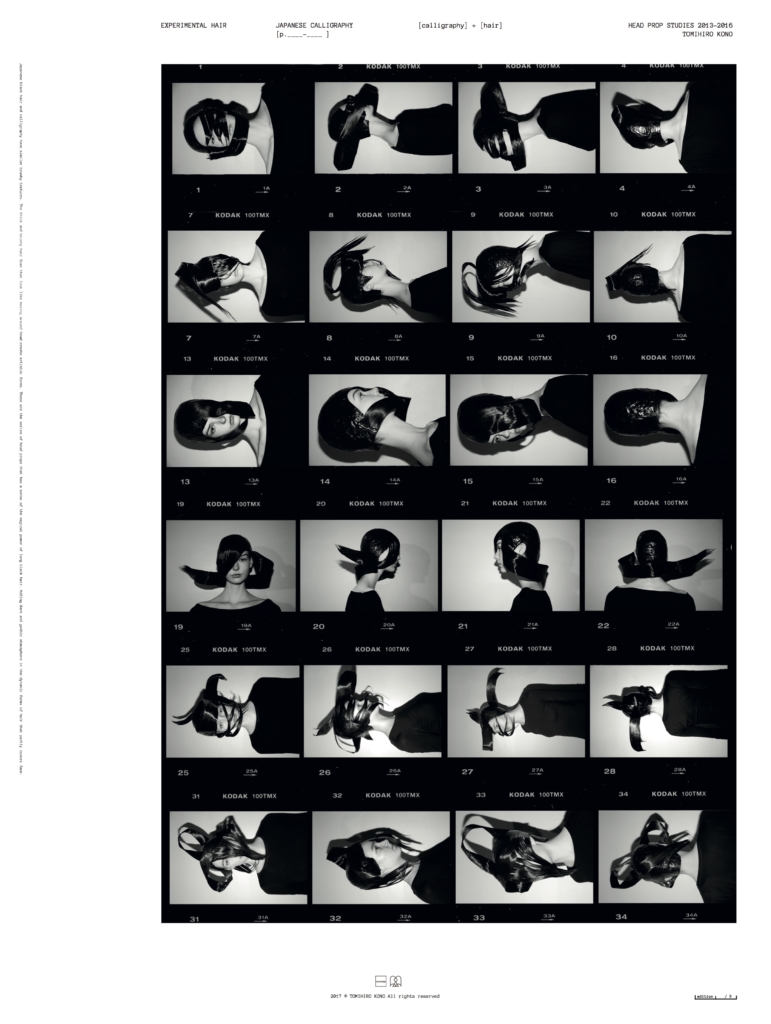 The craft of head prop design is very different to the craft of, say, orange farming (you guessed it! Or you didn’t?!) — a fate that was very nearly sealed for Kono. But instead of inheriting his father’s business, he picked salon hairdressing “because I thought it was a cool job” he explains simply. He moved increasingly into synthetics, quickly accumulating a plump resumé of work that was bound up in a self-published book earlier this year: Head Prop 2013-2016.

It could have easily been just a glossy coffee table book — there are enough alluring images. Rather, it’s a (still beautiful, still glossy) record-keeping object, documenting the swings and roundabouts of Kono’s highly procedural career. It’s a blueprint-cum-journal featuring nearly every creation he has fashioned during that period. It’s like climbing into his middle mind: trace the tracks of clear bubble helmets enclosing cartoon-like 2D wigs (paper, plastic), black swathes punctured with gaping holes, falling about heads and bodies (ethylene and vinyl acetate), and buoyant structures in coalescent primary colours (papier-mâché). It’s big futurism with one eye on the past.

The swirling of old and new feels very true to the land Kono hails from. The merciless innovation of Harajuku, for example, versus the tiny village of Ehime in Japan’s south, where Kono grew up. “[There are] mythical legends that I got so much influence from as a kid. We have rituals to pray for the Sun Goddess (Amaterasu Oomikami), wishing for big catches for fishermen and good harvest for farmers,” he explains. “It’s a big event, a unique tradition of my tiny hometown. I had to dance all day long to pray when I was six.”

Exhausting but impressive, diligent but childlike: the same as his fantastical head props. 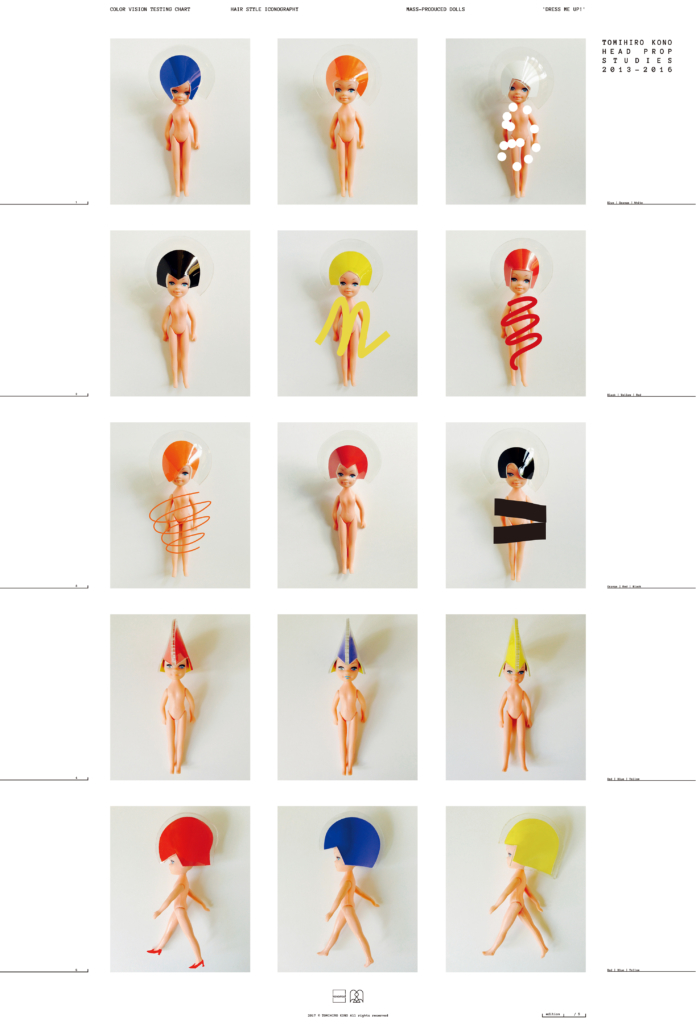