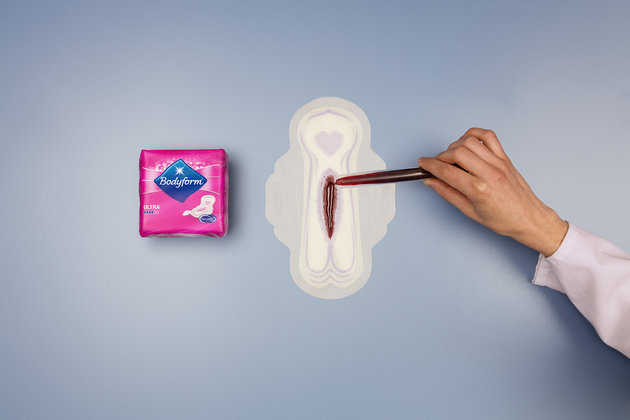 Have you heard about periods? Lots of people get ’em but you’d be excused if you know nothing about them because this natural bodily function is actually disgusting and should be kept away from innocent eyes. Just kidding, but most sanitary product advertisers aren’t.

Usually, when pads and the like are advertised at us menstruaters, we rarely even see a pad. Instead, we see an idiot dude sticking products all over his body and acting like a robot. Or, we see a pretty blue liquid being absorbed by something. This is shitty because it perpetuates the idea that there should be some kind of secrecy or shame around periods — which is so freaking weird.

In a much-appreciated effort to shake the shame, Bodyform are on a mission to normalise the very normal thing of periods. They were the first UK company to feature an actual sanitary pad in a commercial and, following their ‘Period Taboo’ survey (which found that 1 in 5 women feel insecure and weird because no one talks about periods), they’ve created an ad that depicts period blood.

“We were so shocked by the results of our research that we publicly vowed to address the continued silence around periods,” said Traci Baxter, marketing manager at Bodyform.

“We believe that like any other taboo, the more people see it, the more normal the subject becomes. So for Bodyform, after showing blood and a real, in-situ sanitary towel, bringing the two together was a natural next step. In doing so, we remain committed to showing periods in everyday life, truthfully and honestly – because we feel it’s the right thing to do to. Together, we can help make blood normal.”