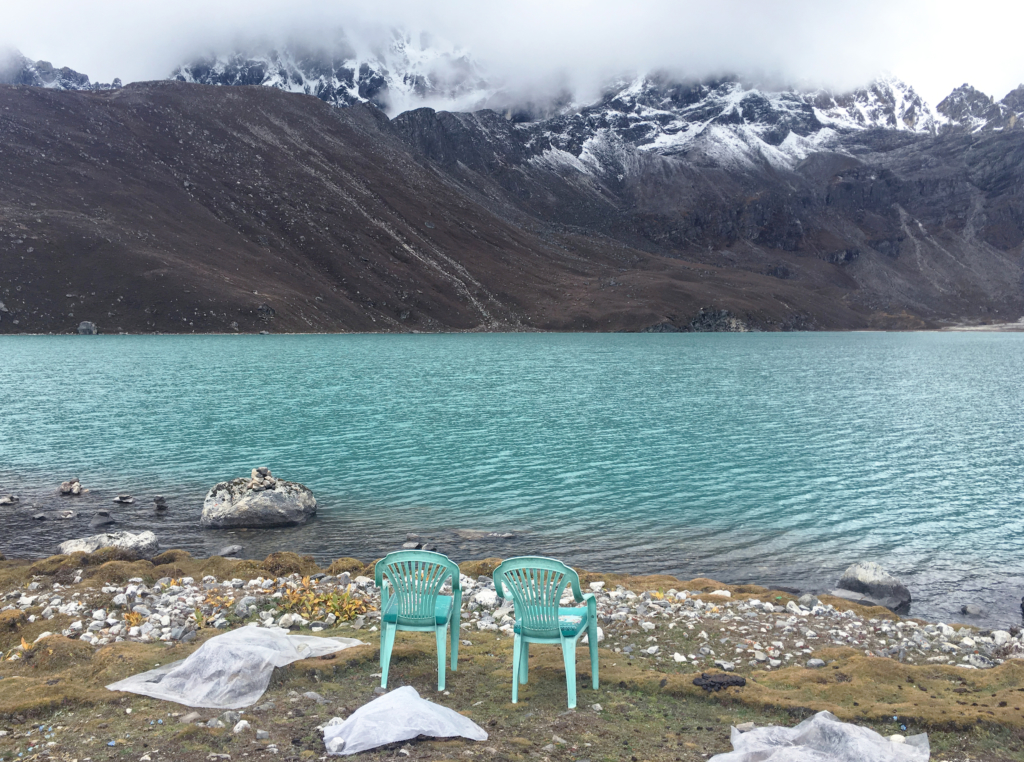 In an upcoming exhibition, photographer Rae Begley lets you get as close as she got to the magic surrounding the Himalayas. Almost. With a series of truly magnificent photographs detailing glaciers and landscapes that remain in wake of their melt, as well as video installation and a particularly hypnotic soundscape, Rae’s work guides you with an energy less about conquering and more about virtue.

Rae has been taking photographs since studying in 1996, but her big push for focusing on landscapes reflects a concern that stems from our digital world and the popularity of social media — the ego and the selfie camera are getting in the way of what’s around us. With that in mind, Rae isn’t just bringing photographic proof of how temporary our environment is and calling it a day, she’s spreading the good word the Ice Stupa project and supporting their glacier-saving work through donation.

Totally captivated by Rae’s work and message, we asked her to get a little deeper on her photography ahead of her exhibition And Then Nothing Turned Itself Inside Out — presented by COMMUNE opens November 2.

Can you give us a little intro into your photography?
Through my photography, I seek to document majestic landscapes, a quietening of frenetic situations and intimacy within the every day. My reportage style is achieved through the use of available light and working with the natural grain of the film to encourage an energy, movement or stillness in my subject. The works maintain a delicate balance of strength and fragility. My photography practice is primarily focussed on working with medium and 35mm film formats to produce medium to large scale printed works.

I’m interested in challenging our perception of what is real and what is not. My photographs capture real life moments yet many works appear to be set up or not of this planet. I’m interested in showcasing the extreme beauty and underlying darkness of our environment.

When did you start, and how has your style evolved?
I have been taking photographs since university where I majored in photography as part of a Media Arts degree from 1996-1999. Since that time I have been shooting for my own personal portfolio in various formats, 35mm, 120 roll film, digital and iPhone photography. In my early years of photographic work, everything was manual and my work was about the full process of shooting on film, developing and printing in the darkroom. At this time, I was exploring black and white photography and working with slow shutter speed movement based imagery of live bands, dancing and punk portraiture.

My style has evolved technically and thematically to create detailed landscape works. In 2012 I re-embraced the purity and depth of shooting on film and this has become the primary focus of my practice. My debut exhibition in December 2014 was the public marker for the pursuit of my photography as a fine art practice with a small body of work titled ANNAPURNA which was shown at Mild Manners Gallery in Surry Hills. ANNAPURNA is a series of 35mm film photographs from the Annapurna region, a massif of the Himalaya’s in Nepal. The work is a reflection on the contrasting elements seen in the extremes of nature and has led to the development of the new body of work I am exploring on glacial melt in sacred mountain cultures, the first instalment is the works for the exhibition And Then Nothing Turned Itself Inside Out.

In 2015 I was curious about local exploration and travelled through the outback of Australia. During this trip, I shot a body of landscape works on 120 roll (medium format) film and one of these photographs ‘Boy on Bike’ was later selected as a finalist in the Australian Life prize as part of Art and About Sydney. The response to this particular image was overwhelmingly supportive from my community and the arts industry. ‘Boy on Bike’ feels otherworldly, like a dreamscape captured in another time and place. The image was captured in a reportage style moment in Coober Pedy, shot on film in one frame and printed in its natural state of pink pastel desert hues. 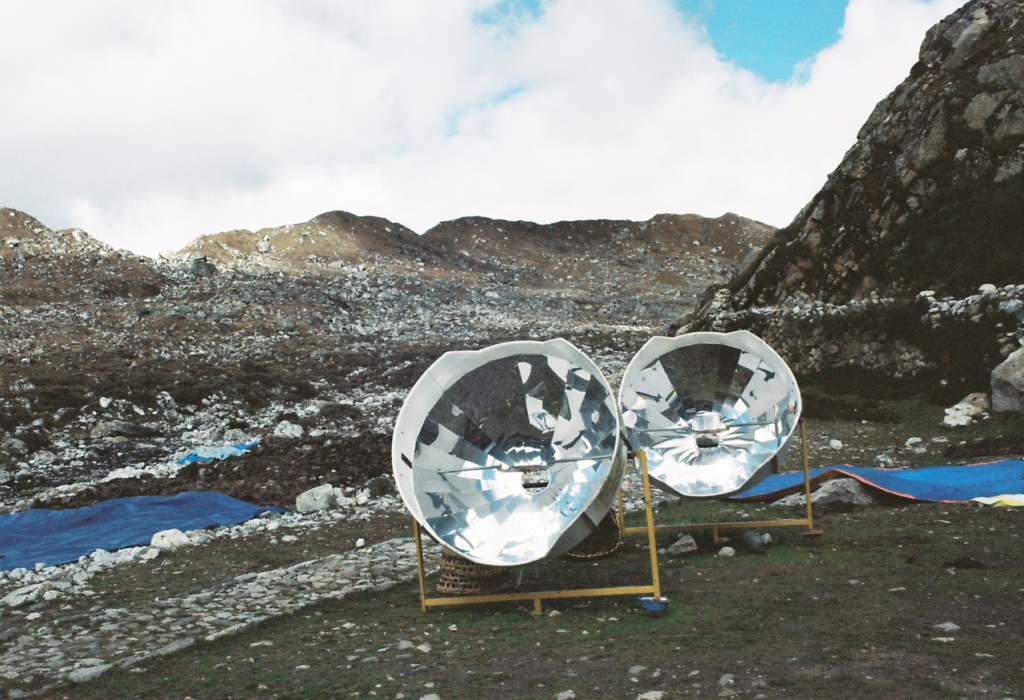 Your new exhibition And Then Nothing Turned Itself Inside Out features scenes you spotted in Nepal… Did you go there specifically to take photographs?
I visited Nepal in October 2016 with the purpose of taking photographs and exploring another region of the Himalayas following my trip to Nepal in 2014. I had a vision to seek out and document sacred lakes and so I arranged to trek to the glacial fed Gokyo Lake and Ngozumpa Glacier, the longest glacier in the Himalayas in the Khumbu region. I was shocked by the decline of the Ngozumpa Glacier and the glacial melt that had occurred from the impact of climate change; there was very little sign of ice so the glacier resembled a quarry or a landscape from another planet. I wanted to highlight this beauty under threat by climate change in the Himalayas through the works.

Is there anything important about the land that you were told before you started exploring?
When you travel Nepal, the local guides educate you about the religious significance of the Himalayas and the power of the mountain gods. Certain mountains are holy and should not be climbed. Western people tend to focus on conquering mountains; for the Sherpa people mountains are climbed with respect to the gods and for holy purposes.

What is it about the glaciers that interests you enough to photograph them?
Aside from just loving the aesthetics of glaciers, I was interested in how they represent the current state of the planet and the effects of climate change. Glacial melt was once slow, the movement of the ice measured in many years, often centuries. In recent decades, the Nepali Himalayas are warming significantly and the Ngozumpa Glacier is showing signs of shrinking, thinning and the ice is rapidly melting; it’s as if time is literally flowing away. 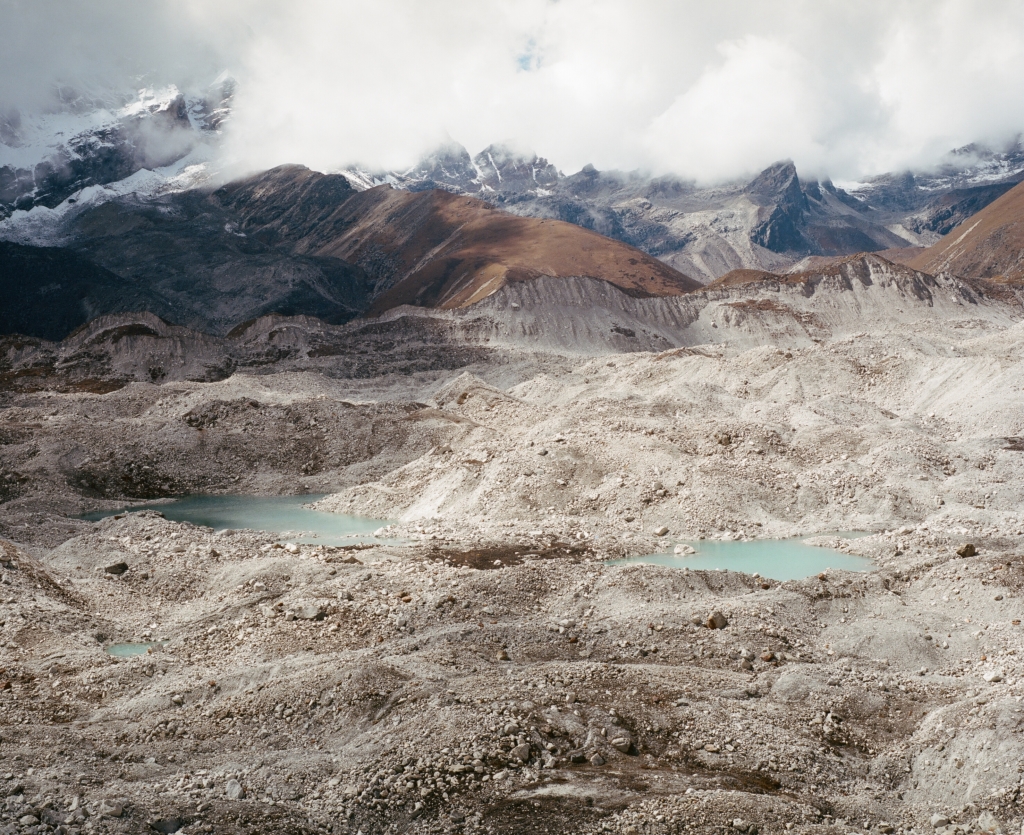 And what about landscapes in general, what draws you to that?
I’m interested in the overwhelming power of nature and how humans interact with landscapes. Through the rise of social media and the digital world, humans have been turning the camera on themselves and forgetting about nature and the value of preserving the planet for future generations; the ego is distracting us from what is most important. While I’m interested in people and pop culture personally (particularly after working in fashion for over 10 years), I’m much more interested in highlighting the beauty and power of the natural world, it is so much bigger than all of us. My work aims to educate through the work by turning the lens on the environment and capturing its grandeur contrasted by its fragility.

Is there anything else that you enjoy taking photos of, even just for personal pleasure?
The iPhone has been a game changer for me with its capacity to have a camera on you every day. I use my iPhone camera as a daily diary and I shoot mostly while out walking in Sydney. My meditation is a walking meditation and photography is part of the practice as it keeps me in the present moment. I love shooting the beaches of Bondi, Tamarama, Bronte and Clovelly and everything in between in morning and afternoon light — the magic hours. I also have a love for underground club photography and rave culture, pure escapism through music and dance. I’m interested in ’tribes’ in general whether they be the oldest tribes on the planet or the tribes we form in city life.

Aside from the photographs, the exhibition includes video and installation — can you describe what to expect here?
The photographic works are amplified by two point of view video works shot on my iPhone of the glaciers and a rock piling installation which depicts the ‘cairns’ that you see walking throughout the Himalayas.

You’ve also included sound — who did you work with to produce this?
The emotive ambient soundscape was made in collaboration with Sydney band Erik Omen (Greg Mullins and Jeremy Hansen) who made an original piece of music in response to my photographic and video works. The work includes sounds I recorded in the Himalayas including yak bells and monks chanting; it is just under an hour long and will be on loop across the gallery spaces. I briefed them with the idea of sound as healing and for spiritual significance, with references including Alice Coltrane and Brian Eno’s music. Erik Omen are planning to release this for sale on vinyl with additional music that they make next year.

I imagine it is quite silent in the environment that these photos were taken (if I’m wrong, please describe the sounds you heard!)… why did you decide to include sound?
My intention is for the show to be an immersive experience so sound was important to communicate the overall vision. The Himalayas have a rhythmic sound; when you are walking up to 9 hours a day over 18 days you start to notice the nuances and the repetition of sounds, most prominently the yak bells coming down the mountain, the Sherpa’s commands and whistles, footsteps on the path, Nepali music playing on the porter’s personal radios and in the villages, the laughter and chatter. I also recorded a half hour of monks chanting in Tengboche which has made it’s way into the soundscape. I’m interested in how we attach sound to memories and also the exploration of sound and frequencies for healing. I loved the idea of creating an original score for the show that was spiritual, ambient and hypnotic, that referenced the sacred mountain culture of the people that resided in the landscape.

Finally, you’re donating a percentage of your sales to the Ice Stupa project — what do they do, and how can people get involved even if they’re not able to purchase your work?
The Himalaya’s are in trouble particularly in the drier regions like Ladakh in India, hence the Ice Stupa project which I will be donating to from sales at the exhibition; they have invented an artificial ‘ice stupa’ glacier as a solution to the lack of available water available for the local people due to climate change. I’ve lifted this quote from their website about the problem:

‘Most villages face acute water shortage, particularly during the two crucial months of April and May when there is little water in the streams and all the villagers compete to water their newly planted crops. By mid-June there is an excess of water and even flash flooding due to the fast melting of the snow and glaciers in the mountains. By mid-September all farming activities end, and yet a smaller stream flows throughout the winter steadily but wastefully going into the Indus river without being of use to anybody. The problem is getting worse with time as Himalayan glaciers are disappearing due to global warming and local pollution.’