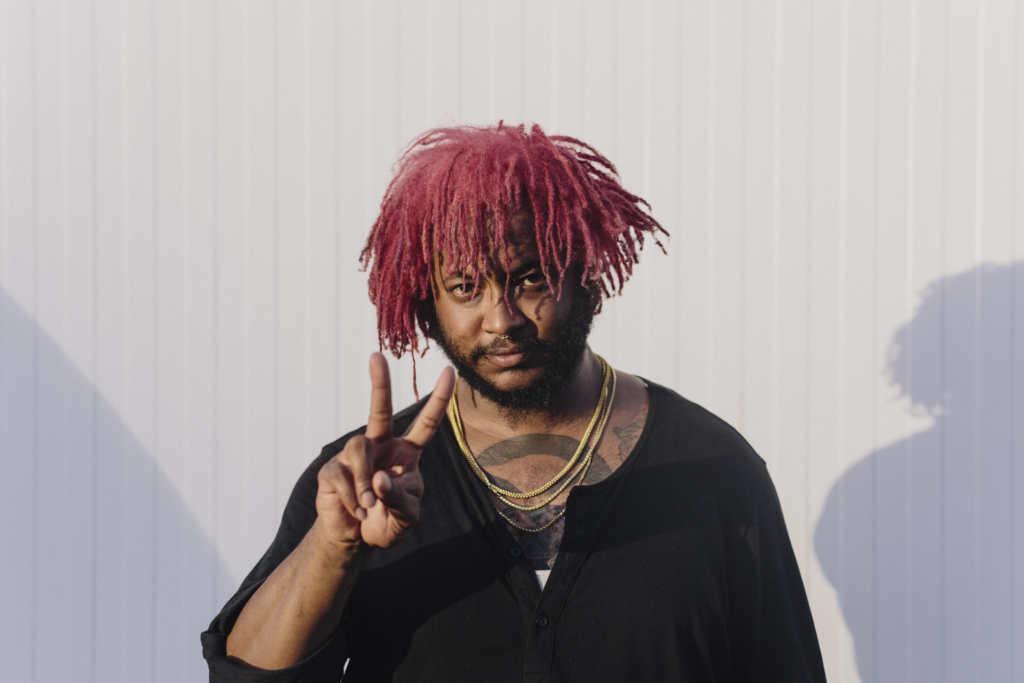 This weekend, Thundercat visited Hollywood Forever Cemetery for the first time. The celebrated bass virtuoso (whose elastic sound spans jazz, funk, soul, hip-hop, yacht rock, psychedelia, and orchestras of video game blips) is a Los Angeles native. So I was a little surprised to hear he’d never made a trip to the historic hallowed ground.

Founded in 1899, Hollywood Forever is one of L.A.’s oldest cemeteries, and the final resting place for some of the city’s most colourful characters (among them Johnny Ramone, Jayne Mansfield, and Toto, Dorothy’s dog from The Wizard of Oz).

The pair of performances kicked off FlyLo’s new 3D tour — a super-trippy tour-de-force he debuted in July, during a widely acclaimed set at FYF Fest. For RBMA LA, FlyLo tapped Thunder as well as another longtime friend and collaborator, comedian Hannibal Buress.

The show began at sundown, when the golden hour stretched the last bit of buttery L.A. light across Hollywood Forever’s fields of palm trees and reflecting pools. Show-goers made their way past headstones and mausoleums to the Fairbanks Lawn, setting up blankets and picnics. Buress began his set (which touched on Nelly’s humming, racist Uber drivers, and sexual relationships with kitchen appliances) as the last rays of light passed beneath the palms. Thundercat’s deep grooves and honeyed harmonies welcomed the warm night.

“It’s very beautiful here — so scenic and serene,” Thundercat told me backstage (next to a crematorium) after a knockout show. His nearly-two hour set was culled mostly from Drunk, the 23-track odyssey he released earlier this year on FlyLo’s Brainfeeder imprint.

Drunk has won universal acclaim for its deeply felt oddball funk, and ability to transform even the most everyday situations (hanging out with your cat, leaving your wallet at the bar, watching Dragon Ball Z, brushing your teeth) into vibrant, adventurous compositions. “I enjoyed the show very thoroughly,” said Thunder. “It was just great, as a first time playing here. For real, it’s fantastic!”

Thundercat’s performance was nothing short of next-level. He’s certainly had time to hone Drunk’s complex and layered live sounds, considering that he’s been touring non-stop for most of the year (he’ll pick back up again in mid-November, finishing a slew of cross-continental Drunk dates in Europe). “It’s been a very long year — a lot of touring, a lot of ups and downs,” said Thunder. “So I’m just ready to put my feelers out and figure out some new shit. Ready to open up to different ideas.”

After Thundercat concluded, FlyLo’s multi-dimensional saga began. The producer, occasional rapper, and now filmmaker has often incorporated dynamic visual elements into his work — pushing his artistry to new bold new territories. The first night’s set featured “Getting There,” a cut from 2012 album Until the Quiet Comes (which soundtracked Kahlil Jospeh’s stunning short film of the same name); “Between Villains,” a 2013 collaboration between Earl Sweatshirt and MF DOOM alter-ego Viktor Vaughn; and FlyLo’s take on the Twin Peaks theme, released this year. (The second night’s set, which I did not attend, concluded with comments pertaining to Brainfeeder signee the Gaslamp Killer).

The 3D set needs to be seen to be believed. Billowing jellyfish tentacles transformed into mushrooming smoke clouds. Thwaps of technicolor tie-dye-ish designs became melting faces. The kids next to me (who recited Earl’s “Between Villains” verse as if in church), remarked it looked a little like Adult Swim IRL. Thundercat had difficulty explaining it at all. “I don’t even know where to start. It’s intense!” he said.

It’s nice to hear Thundercat doesn’t have one of his chief collaborators fully pegged — that there’s still room for surprise. He’s an artist who builds such strong relationship with all kinds of different artists. FlyLo and Buress, sure, but also Kendrick Lamar (who tapped Thunder for much of To Pimp a Butterfly), Pharrell, and Suicidal Tendencies (the cult crossover thrash band for which Thunder played bass for nine years). Last week, he released a music video about an armless samurai that also stars Kenny Loggins and Michael McDonald. It may seem like an unlikely combination, but it’s undeniably awesome.

“I like to let things find their space. And if there’s value there, it becomes apparent,” he explained of incubating collaborative relationships. “But at the same time, everybody’s different. And you have to be okay with that, along with wanting to want to push for something new.”