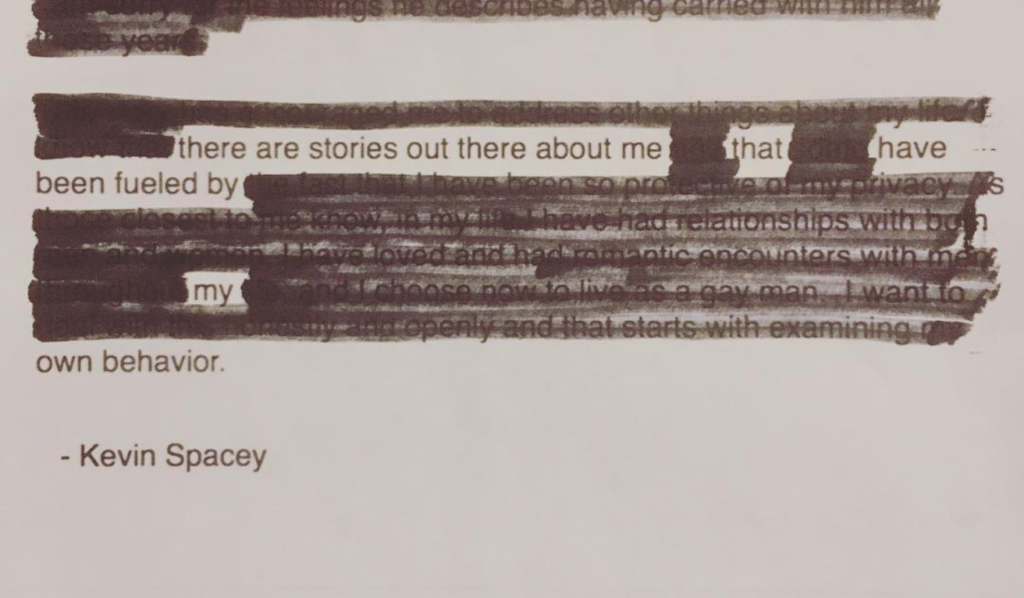 An artist, and current hero, Isobel O’Hare has gone through a bunch of non-apologies from sexual harassers likes Harvey Weinstein, Louis C.K., Kevin Spacey and Jeremy Piven. Using the fine platform of erasure poetry, she’s taken to these crap statements with a big black marker and silenced majority of what they have to say. Neatly symbolic, really.

“I want people to see what these statements are really conveying,” Isobel told Mashable, “which I think is a very male narcissism that demands constant attention, praise, and forgiveness. I hope that the form of erasure itself draws attention to the fact that these men have in fact erased the voices of their victims, for many years, some very deliberately and litigiously.”

“all these my hims” - I blacked out Kevin Spacey’s statement. #erasure #erasurepoetry #blackout #metoo #kevinspacey

“my own behavior” - I did a second blackout of Kevin Spacey’s statement. #poetry #erasure #erasurepoetry #blackout #kevinspacey #metoo

“so long to do that” - I did a second blackout of Al Franken’s statement. #erasure #erasurepoetry #blackout #alfranken #metoo

“Friends, you do not know me” - I blacked out George Takei’s statement #erasure #erasurepoetry #blackout #georgetakei #metoo