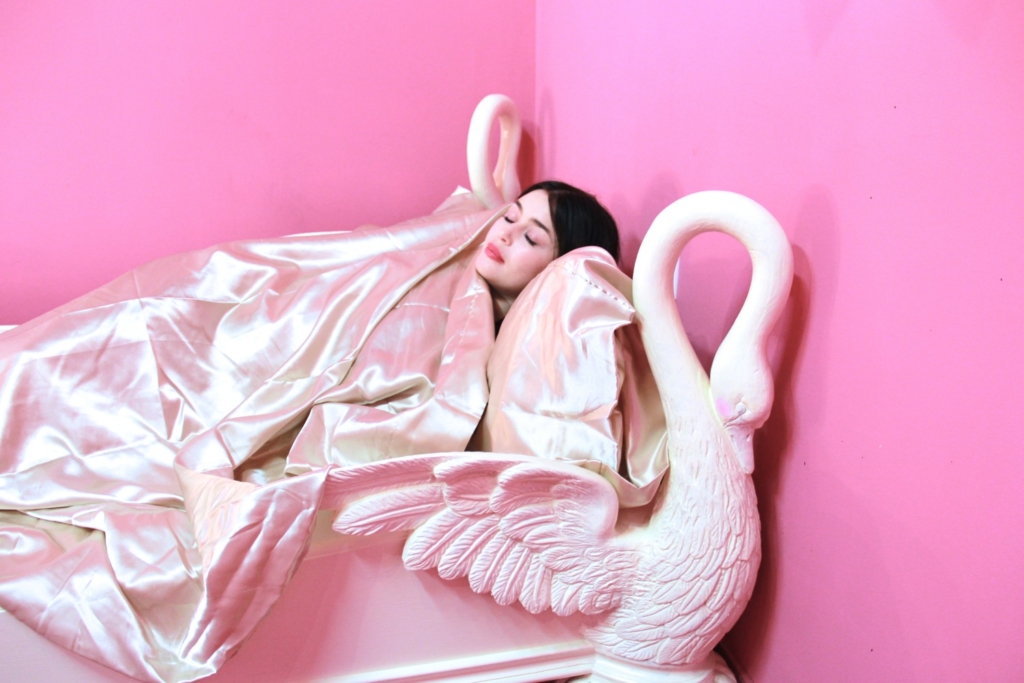 Don’t trip on the faded memories and incognito nostalgia; the blurred, ripped and waterlogged souvenirs from time and place unknown. LA-based painter Ariana Papademetropoulos is a realist. She just has a funny way of showing it.

Through paintings and their accompanying installations, she looks not at fantasy but at perception and delusion. Through excessive references, she creates imitations of situations that are real, pushed to a point where objective verity is a stranger. LA brandings of slightly vintage decor, sun-stripped colours and elements of seduction are right there, true and weird. And that’s what she’s obsessed with.

Following her recent exhibition The Man Who Saved A Dog From An Imaginary Fire, I phoned her up to talk taking risks and receiving encouragement… and of course to find out the whole deal with that swan bed. 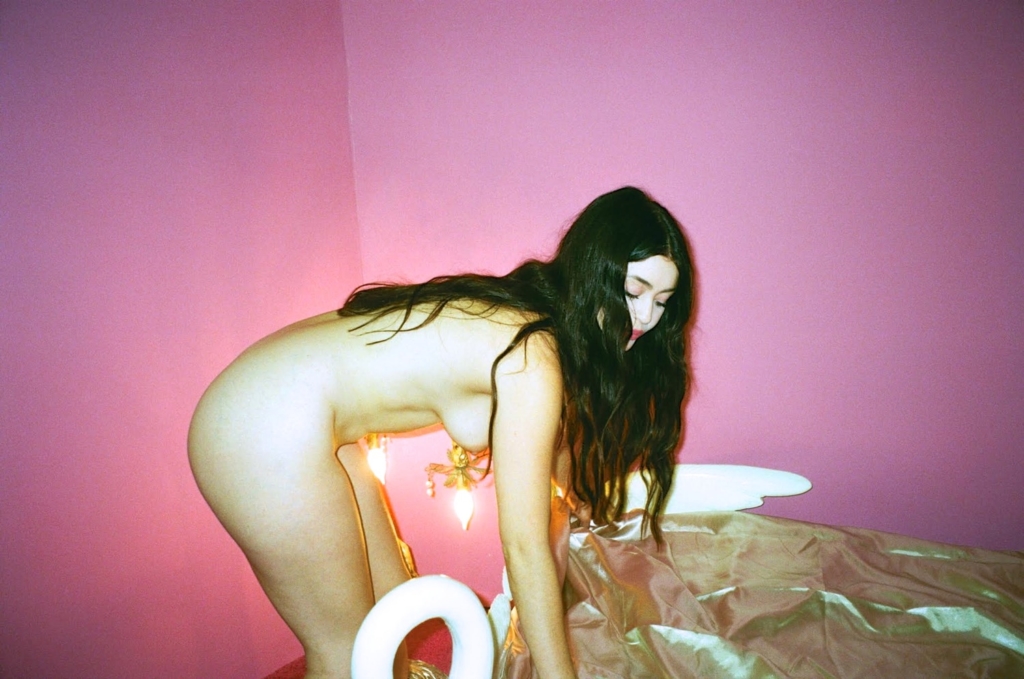 Hayley Morgan: I’m always interested in what kind of families artists come from, especially full-time artists. Was your household encouraging?
Ariana Papademetropoulos: Yeah, my whole family are basically architects. They’re creative, but a little more practical than being a painter or artist. But they definitely encouraged me to paint. It was also the only thing that I was good at, so I kind of had to stick to making things. They’re also a very business oriented family, so they’re creative but concerned with how to make a living.

Do you remember the first time you understood an artwork?
I remember going to Yayoi Kusama when I was a little kid. I don’t know if I understood it but I really enjoyed it. I think it was the first time I felt I was being affected by an environment, or felt being in a certain environment could alter your perception. I think I really enjoyed going into another dimension, which was an artist’s dimension.

And do you remember what allowed you to call yourself an artist?
I mean, did you need the permission of having your first exhibition, or selling a work, or quitting a day job?I’m finally just being comfortable with it. I’m definitely comfortable saying it to a friend or someone who knows me. But whenever I have to fill out a form at the doctors or whatever, I never want to say that I’m an artist. There’s a connotation with being an artist that you’re entitled in the way that you’re smart enough to have your ideas be valid. That’s the only part of being an artist, or using that word, that I’m afraid of, because I don’t want to imply that what I’m saying is valid and important. Even if I do feel that it is. But I guess I’ve always been a painter, for sure, and I’m more comfortable with saying I’m a painter because there’s a technical aspect to it — while being an artist is almost just a state of being.

Your recent exhibition The Man Who Saved A Dog From An Imaginary Fire continues with this vintage interiors theme you have through lots of your work… but it feels different. Is it darker?
In my exhibitions, I usually have an installation and the installations are extensions of the paintings, so it’s almost as if you’re going into one of the paintings. They’re always supposed to be these ideal, matching environments, like Better Homes and Gardens, but there’s always this dark undertone for whatever reason. I just think that’s the aesthetic that I’m drawn to — it’s kind of Lynchian. I’m from Pasadena, which is this country club, upper class situation. But it’s also where Jack Parsons and Marjorie Cameron are from, and there was all this black magic there. I feel like I’m into the undertones of these perfect suburban neighbourhoods. For this one, I had never painted the room, the space that the paintings are in, so that was different. The paintings existed in the kind of interior that they belonged in. 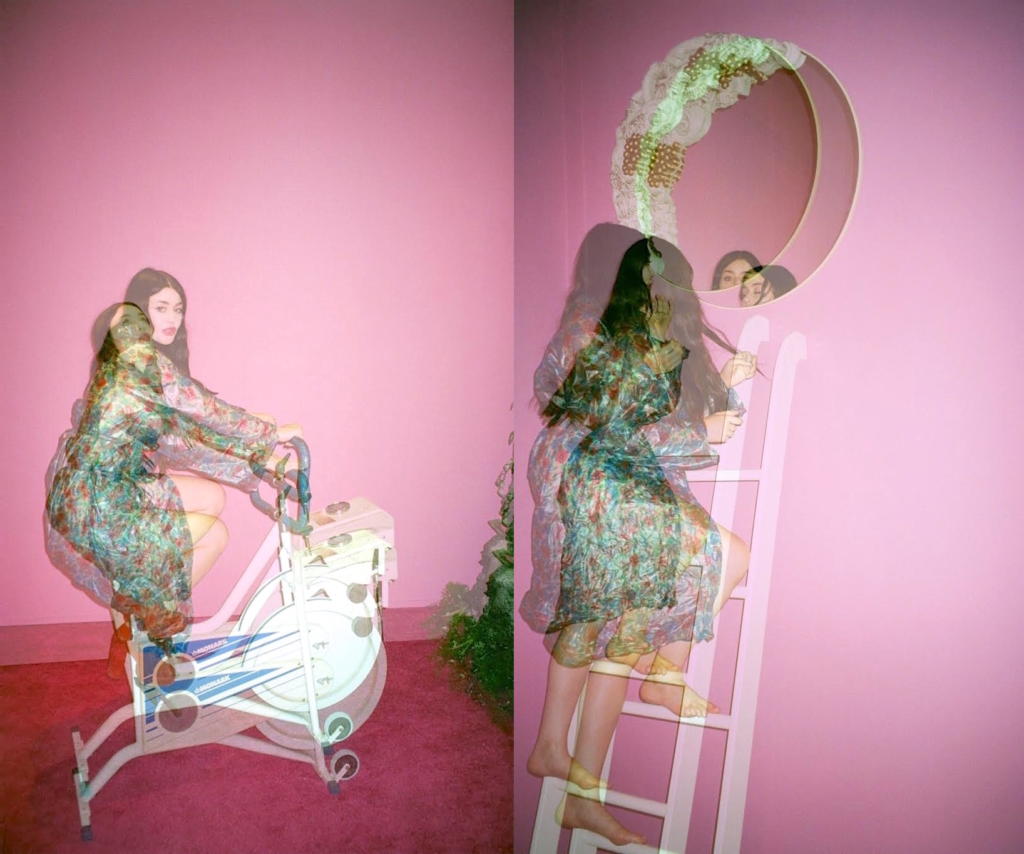 It’s incredible, are you going to sleep in it?
It’s in my living room right now. I’ve been at the upholsterer turning it into a day bed.

And what was the exercise bike for? What is it facing?
So basically that little room has a four-foot miniature door that you walk through, and it’s supposed to be an exercise room. There’s a giant tennis racquet, there’s a ladder that goes to a mirror, and then there’s the exercise bike facing a TV that’s placed within this natural Disneyland formation. It’s supposed to look like dirt and sparkles and plants. But there’s a projection inside it of me inside of a bubble, walking around a mansion. I’m basically running away from a mansion, which mirrors all of the images of the book covers — which are all women running away from houses.

They’re romance novels, right? Is that what you read when you’re not painting?
Yeah, they’re gothic romance novels. And no! I don’t read them at all. They’re mostly terrible. I was just fascinated by this phenomenon of women running out of houses. So there’s a collection of like 200 books, all women running out of houses, all romance novels. There’s also a light inside all of the houses to signify that they’re running away from something or someone. Usually their boyfriends are possessed or, I don’t know, that’s why I think it’s so funny. You know, it’s romance but it’s always women in despair, running, and how is that romantic?

I have no idea.
The whole show is basically about delusion and perspective. I can tell you about the title of the show?

Go for it…
So I was reading a newspaper and there was a headline. It said: ‘The Man That Saved A Dog From An Imaginary Fire’ and it sounded like a sci-fi novel or something. But it was this man who was living in Upstate New York and his neighbour’s house was on fire. So he went in to save the dog and he called the police and the fire department, and everyone showed up but the house wasn’t on fire and he was just on acid. But in his mind he was a hero, until everyone showed up and he got arrested… because he broke into the house thinking it was burning down. So, yeah, the whole show is about perception and delusion, and that’s how it ties into the books.

Do you ever consider a point where things become too weird?
I feel like the line is drawn with sex. If a hotel wants a painting or a family wants a painting, I can forget that sex is still something that is taboo. In this recent show I didn’t have any naked girls, but I usually have windows that expose some part of a naked woman but never them totally naked. It’s weird, it’s a universal thing that I don’t even think about, but it’s still something that comes up a lot — the sexual aspects of the work — but I think it’s pretty tame. I guess the interiors can be seen as nostalgic, and it’s not that I’m trying to be from the 60s or the 70s or the 40s. How we live now, there’s just so much information coming in from all of these different time periods, that I’m not even really sure what era this is and what that looks like any more. 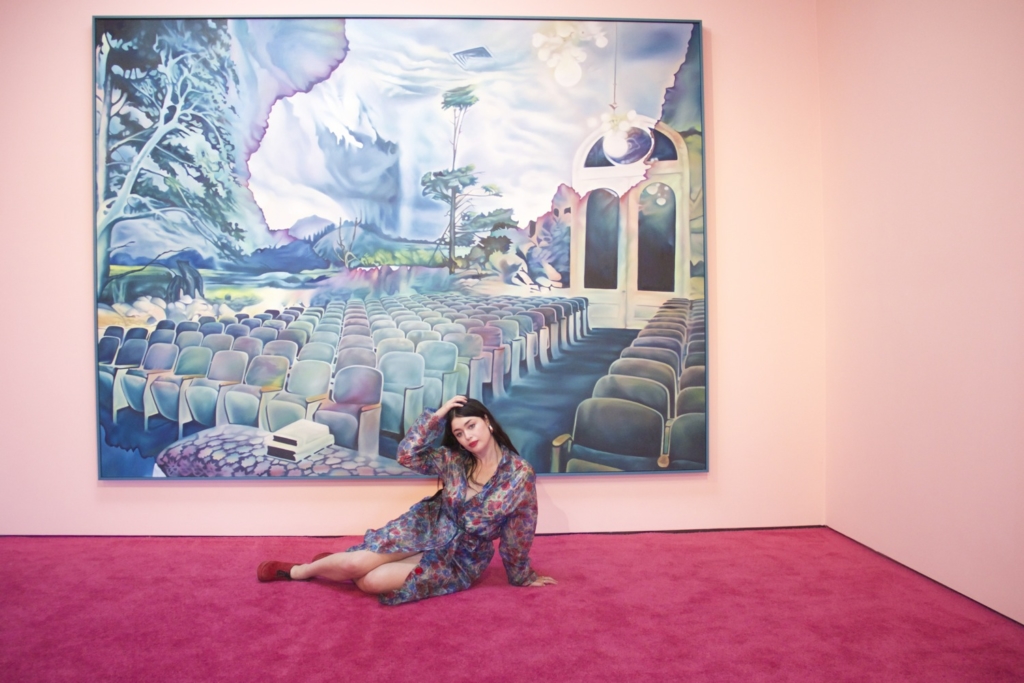 Totally. I think as a whole your work is of course nostalgic, but to me it doesn’t feel cemented in a certain time. It feels more cemented in place, in LA.
I love that. If I’m able to do that, then I’m happy. That’s the vibe I’m going for.

So do you paint from mental images of things you’ve seen or created, or do you use photographs?
I use photographs. I’m a collector and I have so many different images. I combine them, or pour water on them, or tear them, or over-expose them. But the paintings are always really different to the images.

Do you take the photographs yourself?
It’s source material. Sometimes I’ll take photos. It’s such a mixture of things. Like, for the watermark painting, that’s actually painted on. I don’t pour a substance onto the paintings.

Oh my god, how you have the courage to do it…
Right! I’m so happy. I think I was called a perfectionist for so long and I was really criticised for being too much of a realist and not taking risks. So then I began to fake taking risks, where I perfect the spill before and then paint it. I’ll do hundreds of them to get the right one, because I never know what the colour combination is going to look like. But I love that people think it is actually poured on. It’s kind of a recorded moment in time, because if you spilled something it would eventually fade.

You are a realist!
I know, so unromantic. You know what else gets me in the mood to paint: seeing a good show. Going to see other art, and being inspired by things. It makes me remember how fun it is to have a show and make paintings. Podcasts too, they get me going.

Is there anything else about the show that I didn’t bring up that you wanted to talk about?
Actually, I wanted to talk about the huge painting from the show. It looks like a theatre but it’s actually a Mormon church. They painted the building to make it look like it was an exterior, like you’re in the mountains. I really like it when interiors try to make you feel like you’re somewhere else, kind of like Disneyland. It’s a kind of fantasy interior design that isn’t considered art at all, and it’s reflected in my installation. The TV makes you feel like you’re outside while you’re on an exercise bike that’s simulating an outdoor activity. It’s this demonstration of the way we simulate everything.

It’s so weird that you would call yourself a realist, but your artwork is such a strange take on fantasy. I mean, you’ve created the fantasy of riding your bike outside… but you could just ride your bike outside.
Yeah, people think I’m really into fantasy, but my favourite things are just true things that are bizarre and real.