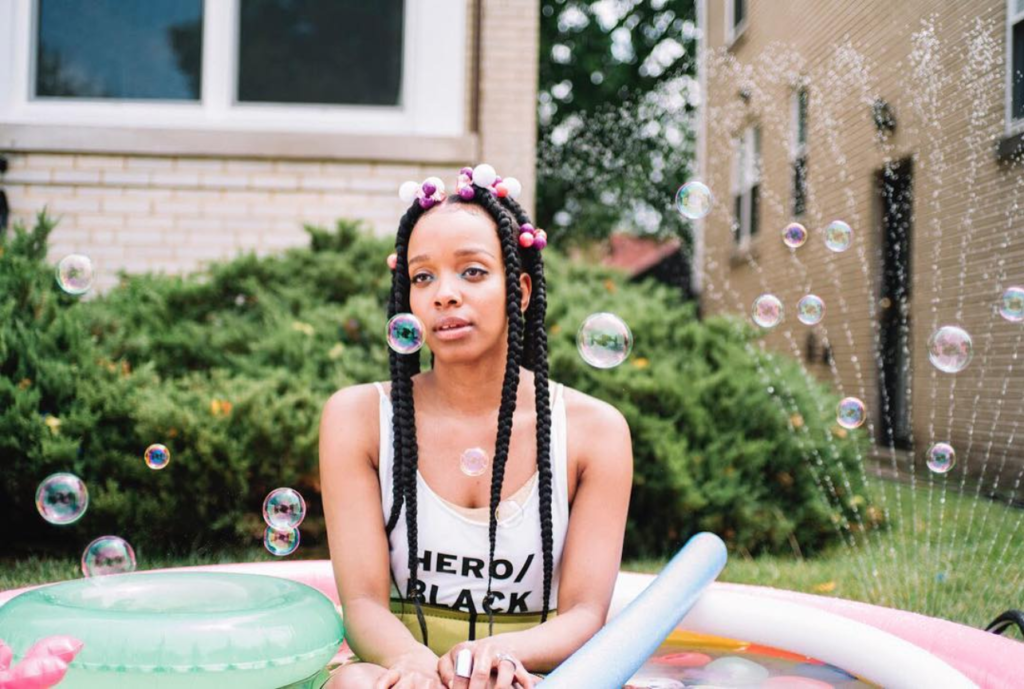 Chicago-based poet, musician and frequent Chance the Rapper collaborator Jamila Woods is about to embark on and Australian tour. How did we ever become so #blessed? Feeling a little unworthy of Jamila’s empowered genius, we phoned her up to talk about her incredibly important work with Young Chicago Authors, the impact of art and community in her work, and her very special debut solo record HEAVN that is an outlet for her to strip her doubts and tap into some self-affirmations.

If you wanna catch her live (and you do!) head here for ticket and dates.

How would you best describe the person you’re trying or hoping to be?
At least right now I am focusing on accepting who I am and discovering who I am. so, I think that’s what I want to be — It’s just someone who is constantly curious and self-accepting at the same time. I’m curious to see who I might discover when I have time to myself.

Community is really important to you, you feed into your own a lot — who was your community when you were growing up? How did they shape you?
Growing up, my family was really close. I’m really close to my siblings and they’re all artists and very creative. We definitely shaped each other and have a very particular sense of humour and way of communicating with each other. Also, Young Chicago Authors is a place where I work now and it’s the place where I started performing poetry and it definitely shaped who I am as an artists. Now I work here and it has taught me how to be an arts educator and an organiser, and that’s definitely a huge part of my identity.

And why do you think poetry or art is particularly important for young people?
I think it’s important because a lot of times people think of art as something that requires you to be talented. Or that you shouldn’t really do unless you have this gift. But actually I feel like poetry and all kinds of art are really great avenues to self-discovery and self-expression. And just feeling empowered — especially for young people, the world is usually saying something generic and negative about youth culture. Art is a great way to shift that narrative and tell your own story, not just hear the story that’s being told about you.

Do you think that poetry as music, which is what I see you doing, makes it more accessible? I mean, poetry generally feels elitist or at least a stuffy, inaccessible thing…
What’s really cool about Young Chicago Authors and when I first discovered poetry out side of school — I did have that idea of it, but it was because I hadn’t read so many poets who actually do write poems that are so accessible and about actual lives I could see myself in. When I started reading poets like Gwendolyn Brooks, Patricia Smith, black women poets, poets who had grown up in Chicago, I was like “Oh, this looks familiar to me, I understand this,” as apposed to when I was in school I felt like I wasn’t getting it. I feel like my poetry is accessible in the sense that it’s telling about my personal experience and my environment. And that’s how I feel about songwriting — asking how can I authentically express my experience and things that I observe and things that make me feel things. Definitely music can make poetry more accessible, especially since most people do think of poetry in that limited way.

Yeah, when poetry is taught at school, it’s taught for the purpose that you’re going to b quizzed on it and on the writers intention… rather than it being taught just for the sake of feeling…
That’s so true, and when I first started teaching poetry it was like “Don’t ask what this means, but ask what lines made you feel something.” That’s a whole different way. Maybe if I had of been taught those poems in school in a different way, I wouldn’t have felt like I didn’t get it.

Why did you first start writing? What were you writing about?
I always liked writing. My mum showed me these books I made, before I could even really write, and I would just tell her what I wanted to write. She would have me trace the letters. But it wasn’t until high school when I had all these poems that I’d written — I had a Xanga page, like a blog. Then I kind of by accident got into this after school program that was about poetry. I tried to get into the singing one but it was full. Ever since then I kind of shifted what I wanted to focus on. I wanted to go to a college where there were poetry clubs so I could be involved in the community around it.

How do you think your voice has developed, what important life events have influenced you?
When I first started doing music, I was performing in a band, so this whole process of doing a solo album has been a huge shift for me. I always had a sense of doubt about whether I could succeed as a solo artists, having always relied on my collaborators before. And I still obviously collaborate with people, but there is a sense of speaking for myself now. I think a lot of the songs on the album have a sense of self-empowerment or affirmation. That’s where my head was at, I had to really speak to myself when I was really doubting.

How important is honesty to your survival?
I’m trying to be my most authentic self. I’m trying to be honest to who I am. Through different periods of my life, like a lot of people, maybe high school and even before, I was trying to fit into different moulds of what seems acceptable or cool at any given moment. And that’s a lot of stress. I get stressed as an adult but I look back on when I was younger and I see that a lot of my stress came from things like that — wanting to fit in and not wanting to do anything stupid. But that’s a lot of extra energy and weight to carry around. So I think it’s important to me to write about those things because I would think if I had messages like that to listen to when I was younger it could have changed my perspective on some things. And the things that I did gravitate towards were things that gave me a portal, like “Maybe there’s something larger than this pinhole I’ve been looking through. Maybe there’s other ways to be as a person.” So I think that’s really important for me in my art to try to represent that.

I read that you use your music to heal, and that you hope others use it for healing too. Do you lean to any particular artists for healing?
I really love Erykah Badu, she’s been one of my favourites since I was young because my parents had one of her CDs. Also Lauryn Hill, the Miseducation album has been really influential to me. Also Frank Ocean, especially the Blond album, seeing how stripped down it was and how a lot of the song structures weren’t typical. It felt very free and very intimate, and seeing how he performed it added another layer.

You’ve worked with Chance the Rapper quite a bit. How did you guys meet and bond?
We met through the poetry community in Chicago. I think it was right after I graduated there was a show where we were both performing. Then we would always kind of be in the same open mic spaces.

You’re about to come to Australia for a tour, have you been before?
I have been, one time, in 2015 I came to the Sydney Writers’ Festival. I had a bunch of songs from HEAVN written, and actually the first time I performed them was there.

Is there anything you’re anticipating?
I’m just excited to experience the different cities, and a couple of festivals we’re doing. It’s always cool because a festival doesn’t reflect a specific city, they all have their own flavour so I’m looking forward to that.

When people see you live, what do you hope they’ll take away from it?
I just hope they enjoy the show and are really happy about the band I’m playing with — it’s a lot of really good, talented musicians. I hope people can just enjoy in what ever way they feel appropriate.