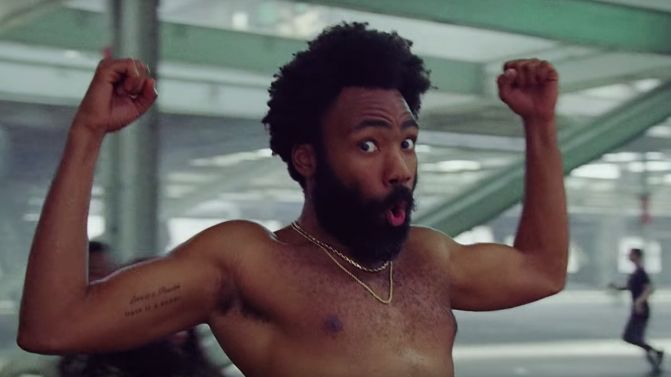 Ur real guy Childish Gambino, aka Donald Glover, surprised released an epic new track and video right before his SNL appearance. As Daniel Kaluuya introduced him on stage, he tweeted a like to ‘This Is America’.

As the title suggests, the song and video are hot on political commentary. With features and appearances from Young Thug, SZA, 21 Savage, Chance the Rapper, Offset, Big Sean, Smokepurpp it’s also burning with hype. Warranted too.

As the internet decodes the messages within the video, some important conversations are happening among Americans who’re reflecting on what their country — it’s past, present and future — means to them.

I’m not sure if anyone picked up on this, but every time someone is shot, the gun is taking away carefully and cradled. Any thoughts? #ThisIsAmerica #ChildishGambino #donaldglover pic.twitter.com/zZ8vF5vo43

Placing the guns carefully on red cloths is such a subtle but glaring criticism of the fact that even after such atrocities we still value such deadly weapons over the lives of innocents. @donaldglover #ChildishGambino #ThisIsAmerica #Dontcatchyouslippin pic.twitter.com/9IS0uF9Vly

He is playing the role of the Jim Crow Minstrel, referencing rap artists of today. Look at how he stands when he shoots the guitarist, the crazy eyes, untrustworthy smile, down to the yellow shoes on his feet. GENIUS.#ThisIsAmerica #ChildishGambino pic.twitter.com/hAOrZ8lbWN

#ChildishGambino Stans complaining that he’s getting too political, man he’s always been political, he’s always spoken out about what it’s like as a black face in a white space. People just don’t like the hearing these uncomfortable truths of the black experience. #donaldglover pic.twitter.com/Op0YzNF1pJ

#ThisIsAmerica Oh. My. God. remember when Andre 3000 snuck in "Y'all don't wanna hear me, you just wanna dance"? We hear and see this. #ChildishGambino issued a challenged to the entirety of hip-hop...at least. PS-If anyone knows the significance or the pre-90's cars, lemme know

The churchy melodies & gwara gwara dances might distract you from the killings, suicide going on in the background.See how we let Entertainment & trends blind us to the vile shit going on in the world? #ThisIsAmerica #ChildishGambino pic.twitter.com/PuYZPoGkLI

I thought this was an especially powerful image. Donald Glover #childishgambino literally dancing between the indifference/opulence/materialism of modern pop and hip hop culture and the personification of the brutality of the black experience/history/culture of Hip hops roots pic.twitter.com/7WTBNArDf3