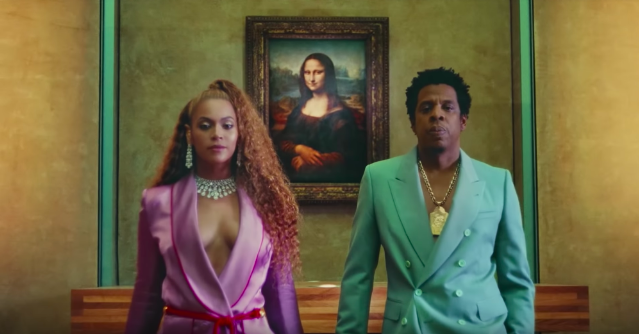 The only person that’s probably as widely recognizable in the entire world as Beyonce Knowles is The Mona Lisa. Actually, considering more people in the world can recognize the McDonald’s logo before they could identify a photo of Jesus (that’s an actual fact I read somewhere, I swear), more people probably know Beyonce. But now, thanks to the Queen and her hubby, children everywhere are getting a giant dose of art history. If you don’t know what I’m referring to, you should probably check your internet connection. But for the sake of, you know, context and shit, last month, Beyonce and Jay-Z released a new video for their track, “Apeshit.” In it, the United States’ very own Royal Couple, parades around The Louvre with a crew of dancers, shining a light on some of the world’s most famous artworks, including The Mona Lisa and Alexandros of Antioch’s “Venus de Milo.”

And because even The Louvre can’t resist some free publicity, the museum is now capitalizing on the vid by launching an exclusive Beyonce and Jay-Z-themed tour. Yep. According to Artnet, The Louvre is now offering a 90-minute, self-guided tour for the 17 pieces featured in “Apeshit.” So, thanks to Bey and Jay, Leonardo Da Vinci has never been more hashtagged. Who says millennials weren’t cultured af?