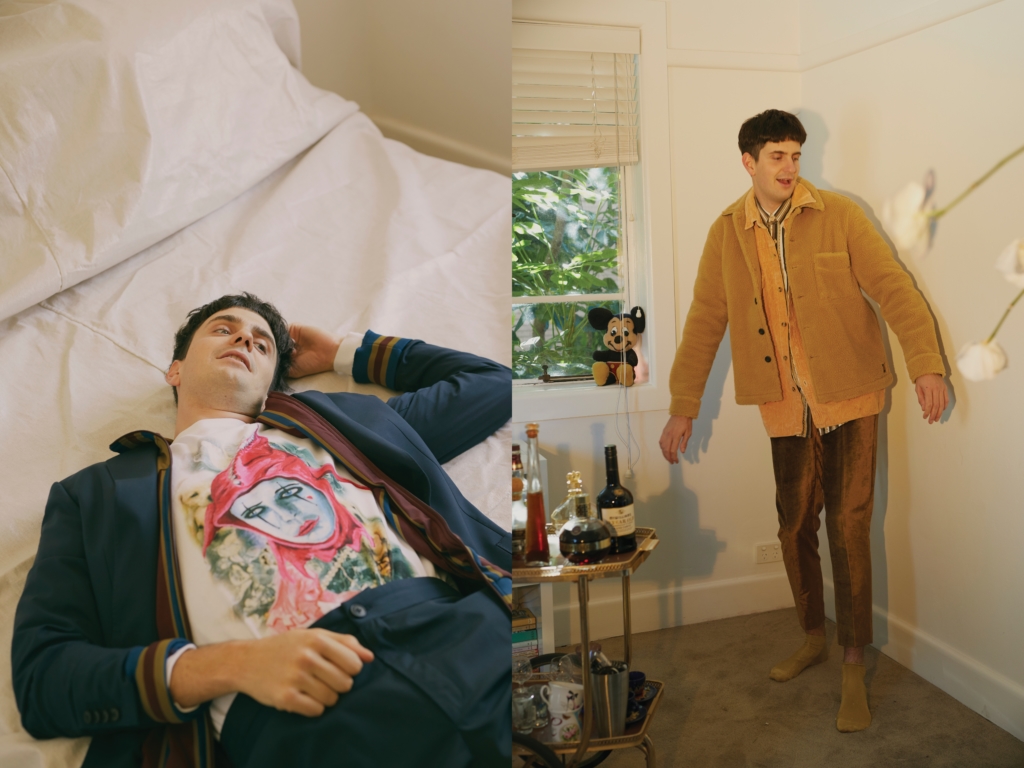 Charles Rushforth is a musician in many proportions — in his rather well-known role in Sydney band Flowertruck; in his revealed beginnings reinterpreting Bucko and Champs’ Aussie Christmas anthems; and in his new solo-ish project Greenwave Beth, which quite ironically came about after the purchase of some hardware that’d allow him some musical compensation and introductory control over his sound. With Greenwave Beth, he ditches the post-punky riffs and jingle bells for synth-hard melodies, drum machines and freely brooding vocals that bring a bit of dark emotion to an otherwise pop (though, weird and unformulaic) sensibility. On the recently released debut EP People in Agony, he belts out a coming-of-age story that’s as anxious and unsettling as yours felt at the time. The light at the end of the tunnel is that he survived it, brilliantly, and is around to talk through the motions. 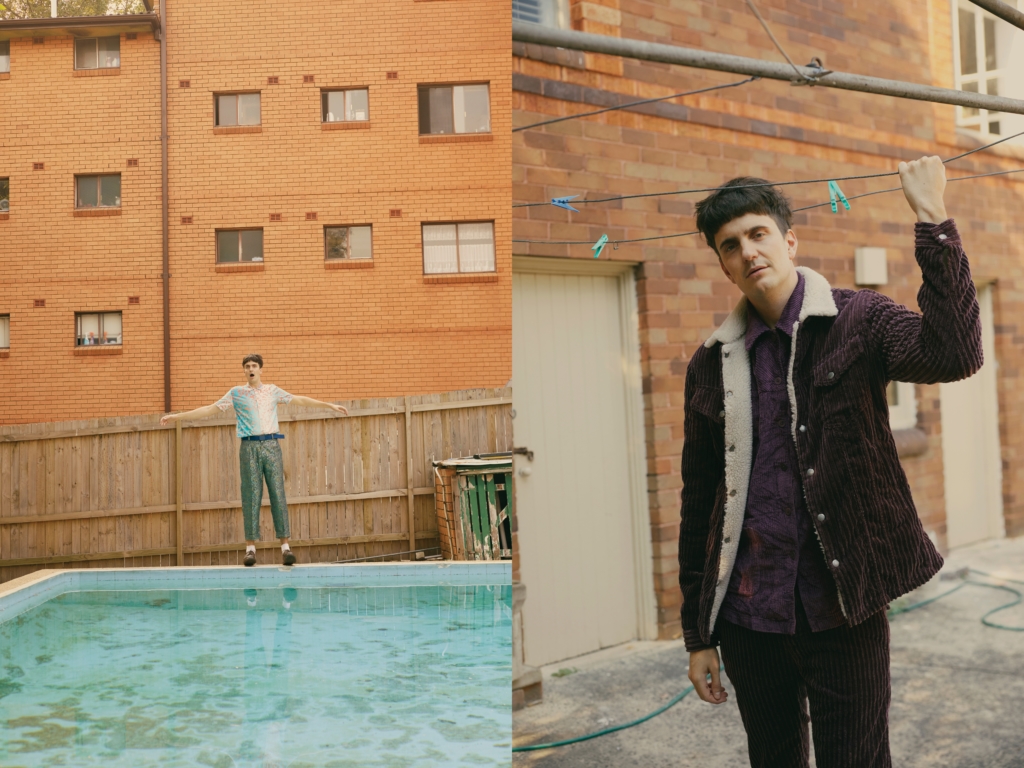 Hayley Morgan: Charles, how are you?
Charles Rushforth: Hello! Great!

We’ve got a couple of artists in this issue who’re branching out to pursue solo stuff. Do you like being alone?
Maybe we should all start a Blue Oyster Cult cover band together. I don’t think being alone is just something you can like or dislike. Maybe it’s more like something you can or can’t afford. Making music isn’t a form of self-flagellation in my case. Making this EP involved the efforts of a multitude of friends and musicians that either played instruments or gave advice vital to its construction.

Is this actually a solo project? I’ve read it described as both a solo project and a band with Will Blackburn…
Will has been there from the beginning. We split everything 50/50, he’s my favourite drummer and my rock. It’s still a solo project in the sense of how the songs are written, but we have experimented in the past with having different people play instruments live with us. At the end of the day it always comes back to me and Will.

Do you reckon we need people around us to survive?
Definitely. I’m not a big Bear Grylls guy — I’ve always been suspicious of how every plane crash scenario he recreates affords him the luxury of a hunting knife and a satellite phone. I know that in any given global environ-mental or economic disaster, I’m a goner. I’ve got the triple jeopardy of being a musician with an arts degree based in Sydney. I love people and I wouldn’t want to survive without them. I wouldn’t stand a chance.

I wonder about your new album title People in Agony — who are these people and why are they in agony?
Everyone who survives the turbulence of adolescence and makes it into the orbit of working society is nonetheless tethered to their dreams and hopes that keep them alive as they continue to revolve around the sun. These fuels can act as a ballast and drag us screaming to burn up in the upper atmosphere or propel us at an escape velocity of our own choosing. Despite this, people, as they either fret at the controls or disregard them at their own peril, are doomed with a finite reserve of energy with which to control their own trajectory. These crafts, after all, were designed by children and whatever control is left after balancing the day-to-day is often spent in deliberation of what tank next to jettison. Our lives go on, and yet the emotions and fears that make them unique are thrust away.

Your lyrics and their delivery are really from the guts. Is it confessional?
My first introduction into music was a Christmas album I had on tape. It was called Bucko and Champs’ Aussie Christmas. I would come up with my own verses and sing them to my parents. I’d make my friends on the bus laugh with it and I never had to take lessons after school. I’m interested in the way things are phrased and said rather than how they are sung.

I noticed that identity is a theme through the album. Do you think that knowing or understanding our identity helps us to feel like we really exist? Or where do you think this very human trait of searching for (and expressing) our identity comes from?
It’s hard to know what traits of self are permanent or not, or how susceptible they are to trauma and other conditions. Is my sunny optimism waterproof? Will it sour if kept under the shelter of cynicism for too long? I feel there is a core identity in me somewhere, some silly face made that stuck when the wind changed. There is a beauty in treating it with care, not taking it apart in case you can’t put it back together again. 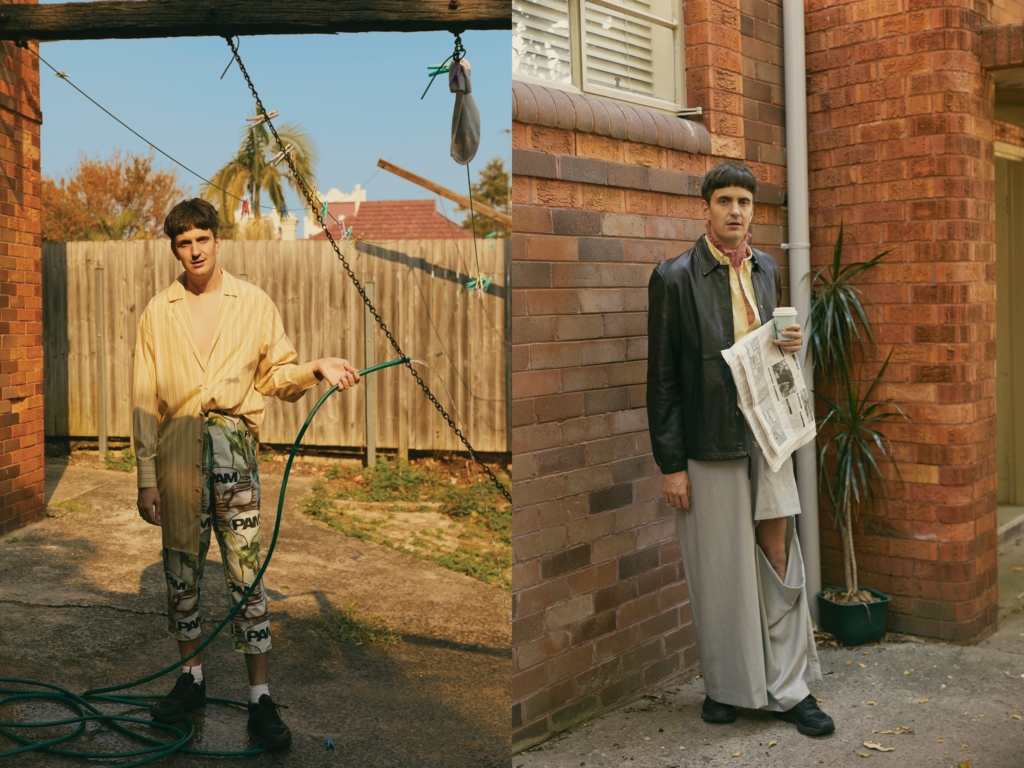 Do you express a different part of yourself in Greenwave Beth, than what you do in your other band Flowertruck?
Being in different bands lets you tackle music from many different angles. I suppose Flowertruck is subtler in its disguises, while Greenwave Beth is a mask that knows it’s a mask.

And what about in real life, who are you then?
I’m a pretty chirpy, happy guy. For what it’s worth, I’m currently working in a caravan park in Broken Hill with my girlfriend. I’m working on the next Greenwave Beth/Flowertruck thing and taking a break from the big smoke. Ironically, there’s more lead in the air here than in Sydney.

What other ideas or feelings are you reconciling with this record?
People in Agony is sort of a coming-of-age thing for me. It took a long time to figure out how I was going to record it and it involved lots of expensive experimentation. Doubt and confidence, too.

I hear all these big names thrown around when people talk about the sound of Greenwave — Alan Vega, David Byrne — is that intimidating? Are they actually the musicians that informed your sound?
I’m honoured by all favourable comparisons. Alan Vega definitely influenced my instrumentation, for too long I was obsessed with getting the right kick drum sound but it was Suicide that reassured me that you could just download any old thing off the internet and then run it through a flanger if it made things interesting. The comparisons to those artists are very intimidating — there is a huge power in other people’s expectations.

What were you reading / watching / listening to when you wrote the record?
I was reading lots of Australian stuff. The Plains by Gerald Murnane, Illywhacker by Peter Carey, To the Islands by Randolph Stow. I was mostly writing in a makeshift recording studio I set up in an attic. The roof slanted to the point where I couldn’t stand, so I’d crawl around making music all night like golem. The neighbours hated the noise and would throw beer bottles and things at the roof to try and shut me up.

You describe yourself as a ‘musical risk’ — let me know about that…
The solo artist can usually be confident that despite their audience and environment, each live performance exponentially helps them improve their craft. Acoustic singer songwriters are like massive deep ocean squids that can squeeze through a gap the size of a fifty-cent coin; they possess a flexibility and endurance that al-lows them to survive in hostile environments like small country town pubs. In contrast, Greenwave Beth needs certain things to flourish. I’ve been electrocuted due to dodgy power boards at house parties, blown up PA speakers and have had countless arguments with sound engineers. If I was smarter I would have homogenised some of my music gear to make playing live easier but as it stands Greenwave Beth shows can be dangerous and humiliating. But I pride myself on my non-survivability, the fragile nature of the performance, it allows me to reach some heights that the squids I compete with can’t.

I wondered how you stay alive on stage, the performance is pretty high energy…
I hydrate and try not to drink before a show. It’s not always high energy though, sometimes being very still is also captivating. I try to find my pocket of motion that lets me react to the environment organically. Sometimes I can do it and sometimes I can’t — my focus sharpens and wanes like the wind.

When people are watching you live, they’re generally trying to keep up with your movements, so lots of manic dancing, but how do you imagine or hope people are listing to your music at home? What’s the serving suggestion?
I’m just honoured there are people listening. It means a lot to me.