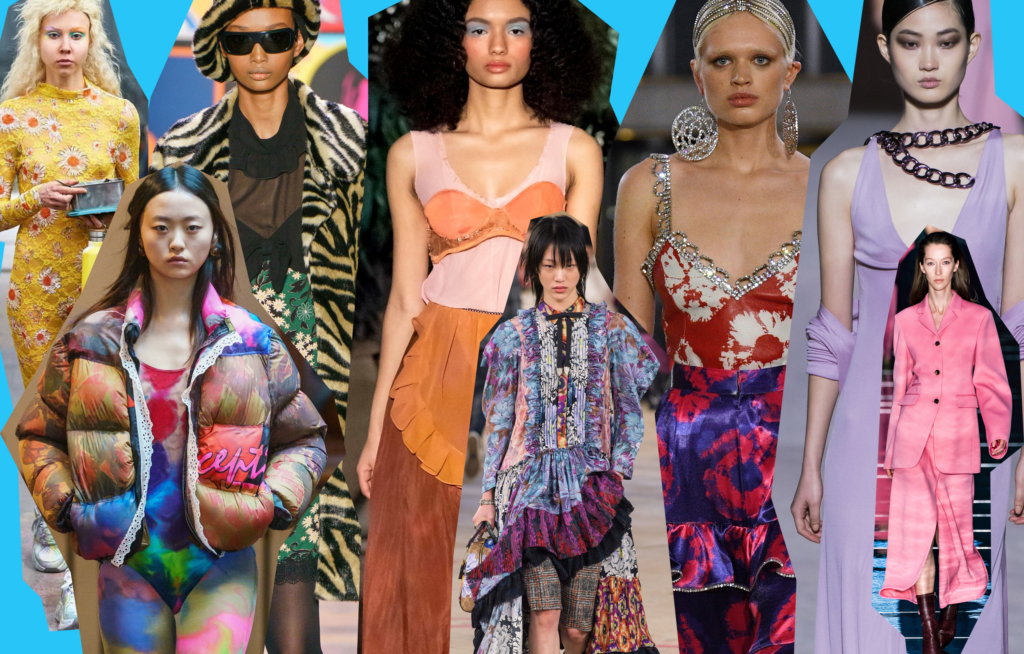 With designers like Alexander Wang ditching New York’s official Fashion Week schedule and Rodarte showing in LA after making a big return to NYC just last year, it could be said that NYFW was shaky territory. But that’d be wrong. This season, the city was absolutely feeling itself. New labels, up and comers, and established brands all gave the people exactly what they wanted: fresh and weird ideas, aspirational identities, hella glamour and an assertion of colour, boldness and hope. Also lots of tie dye and and rainbow stockings.

In no particular order, except alphabetical, here are the collections that make us want to open our wardrobes in that dramatic way they do in films right before a makeover scene: 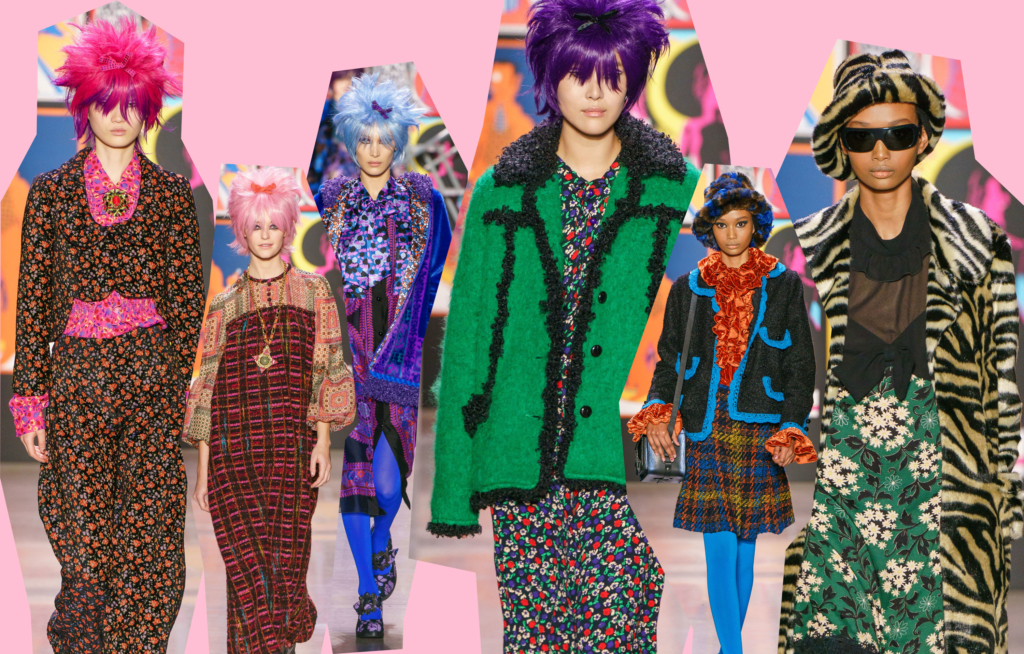 The elusive punk nana mood. Not one that’s easy to strike a balance on — wallpaper prints and textural knits can turn bad, fast — but one that’s truly incredible when pulled off right. Anna Sui brought all of the colour and character she could muster for this ‘Poptimism’ collection — a nice escape from our fairly tiring reality, proving that a cool outfit can change your life (for a min). 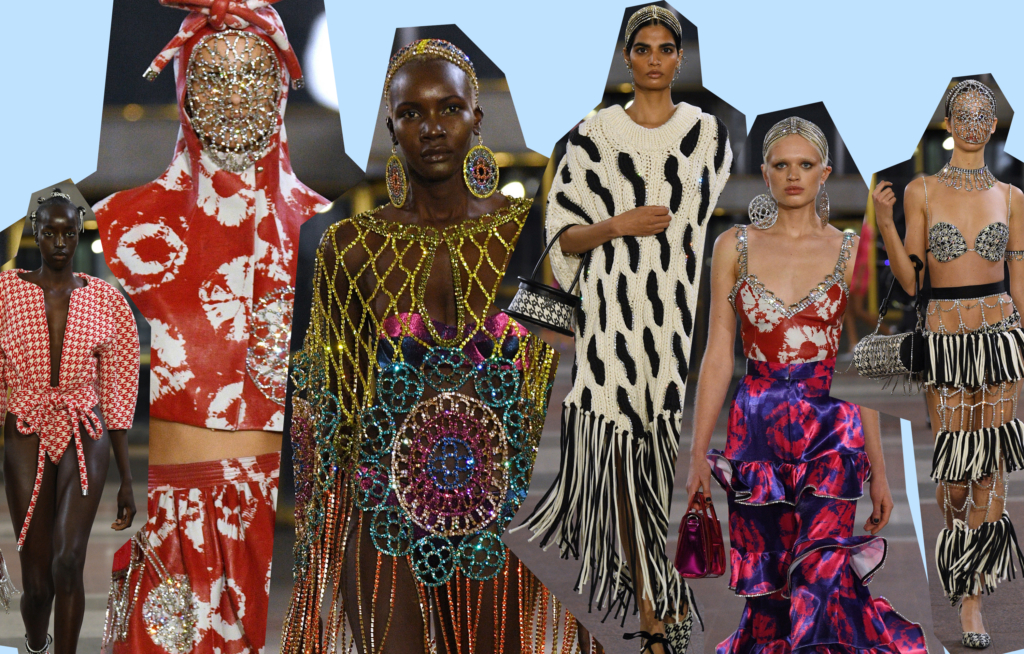 Excuse us while we glue diamontés to every surface of our skin as well as every hem and hand bag in sight. Area made a case for the sparkle once more this season, but rather than being overtly glam they took it to a more dangerous punky side with interesting proportions and tricky tailoring. The Area girl is the exact woman you want to meet in the bathroom line at the club and spend the rest of your night/life with. 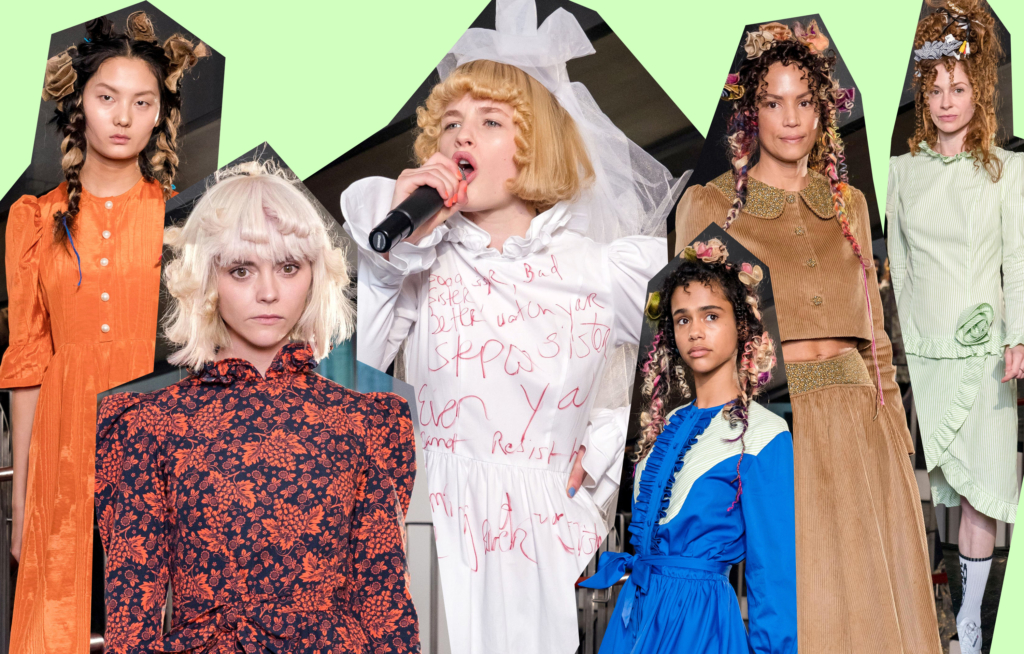 Batsheva Hay’s glory box frills have recently become a girl-girl staple. And after presenting a new collection of frills in her NYC pop up, on women like Christina Ricci and Esther McGregor (who wore a dress that Courtney Love had scribbled her ‘Good Sister/Bad Sister’ lyrics on), the uniform is showing no signs of vanishing. Long live modest beauty! 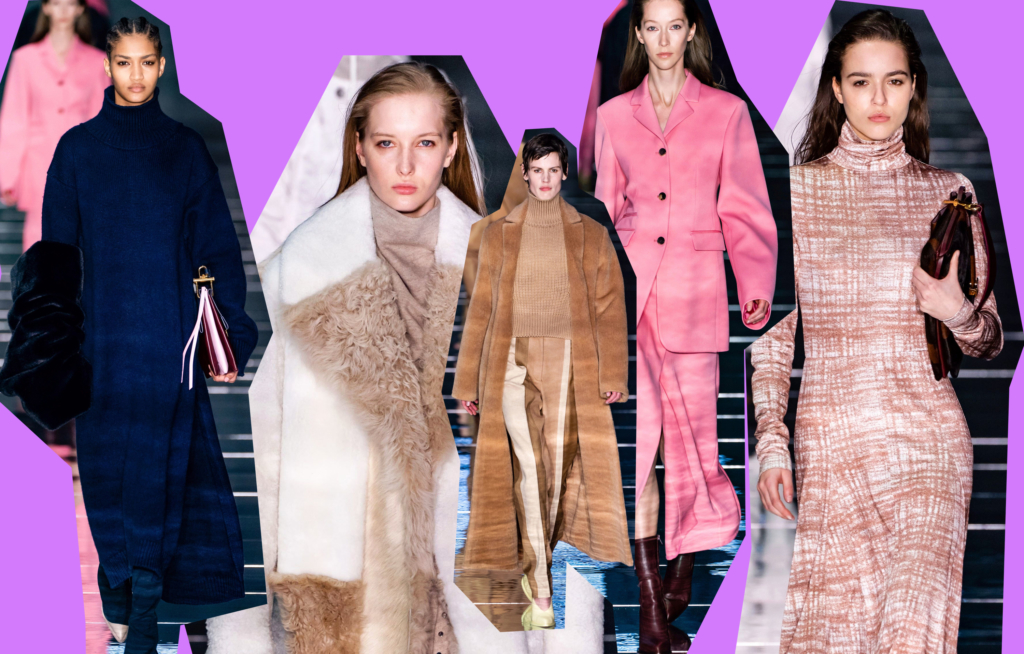 Dress for the job you want, they say. So if in fact you’re an aspiring boss bitch, may we please direct your attention toward Boss. You’ll find heritage tailoring with modern tweaks — said to be inspired by New York’s art gallery curators and the professionals who visit them. It’s a laid-back importance that these piece carry that makes them so worth your while. Also that musk stick suit. 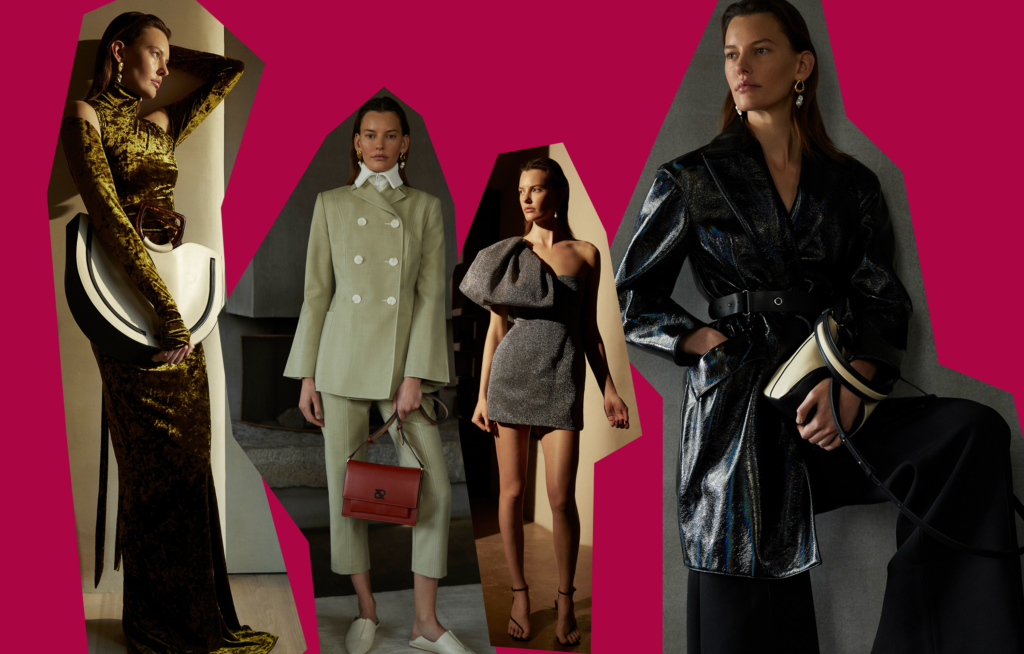 This season, Camilla and Marc looked to simplicity and natural things. What resulted was 24 looks that we’d happily have on rotation for the rest of our lives — a timeless palette of colour, print and texture informed everything from floor-sweeping crushed velvet dresses, shiny black outerwear, the perfect matcha suit, and belts that quite frankly made us love belts again. Having all of these pieces shown in a Greenwich hotel penthouse, with the incredible Ana Kraš as host, was the aspirational icing on the dream-life cake. 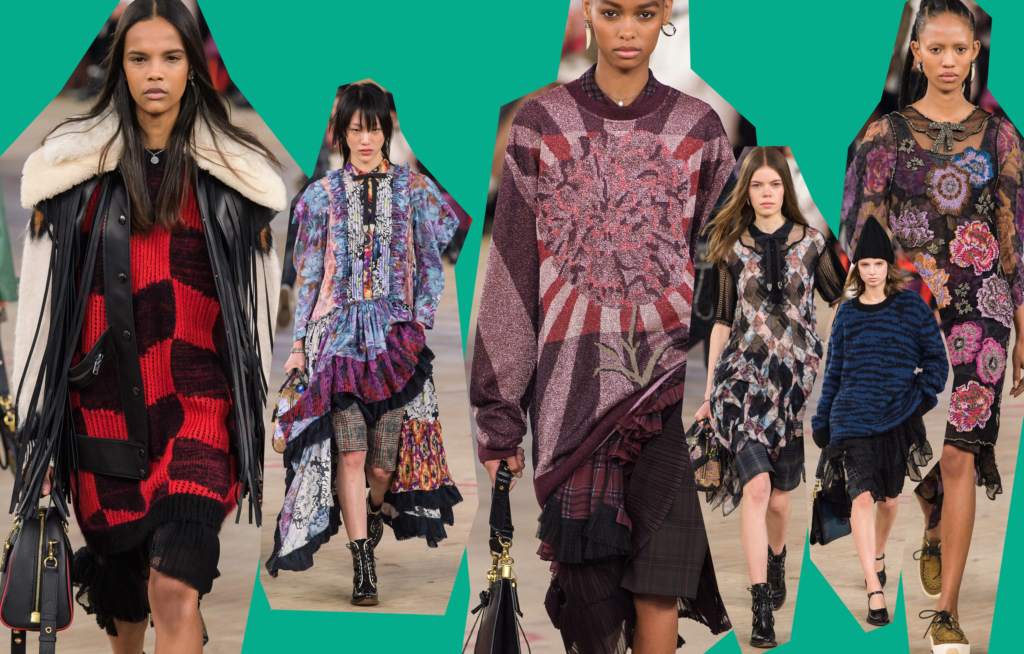 Bermuda shorts under chiffon dresses. What a moooooood. And this is the thing about coach — with all of their mixed prints and generous fabrications, they never make you fear fashion. Their pieces slot happily into stuffed wardrobes and their new styling tricks can be applied to already owned pieces. 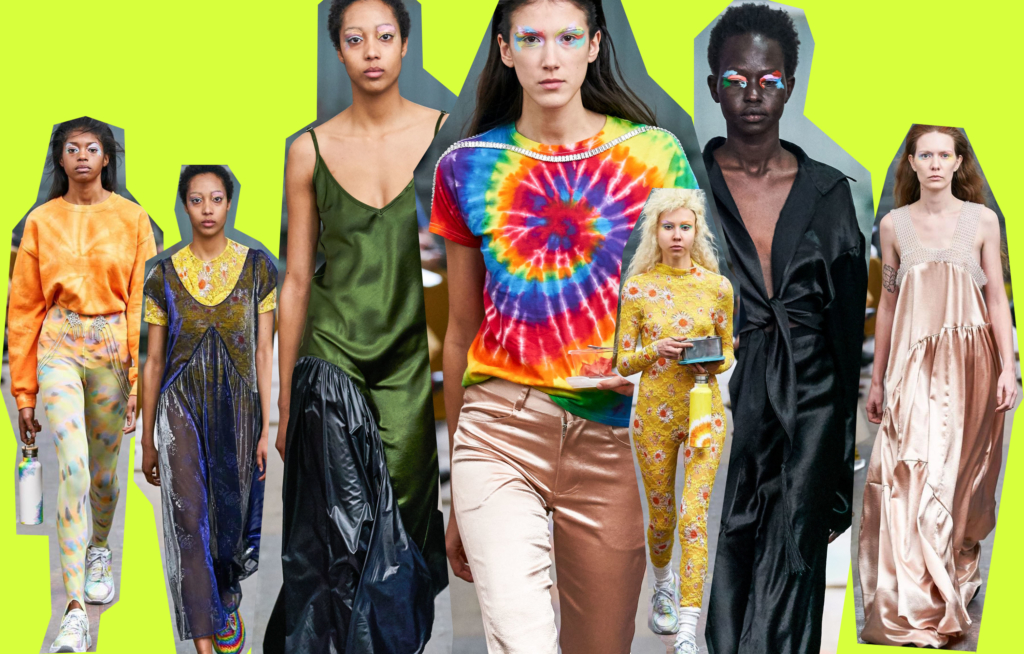 Huge call, but: Hillary Taymour’s Collina Strada show was the best thing anyone’s eyes saw at NYFW this season. Each time she explores something close to her — energy, society, true selfs. This time, she explored her flawed relationship with our Mother Earth. It wasn’t a sermon on doing better, but rather a confession on what she still does wrong. Regardless, it’s what she did right that we’re celebrating post-show. A whopping 75% deadstock fabric and recycled waste provided the foundation to a collection that’s fun, wearable and completely of-the-moment. Strange coloured silks met familiar tie dyes, layers billowed with freedom, another case was made for coloured tights, and we were all reminded to drink water. 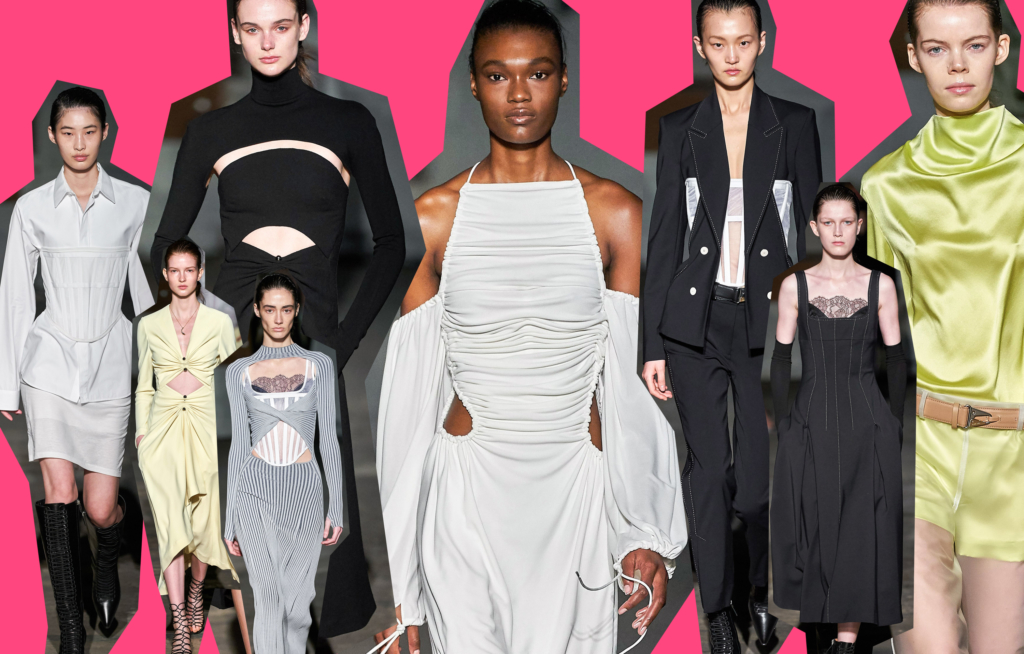 If you’ve ever had reservations about Dion Lee’s place in New York, let this show quash them immediately. His paired back blend of opera gloves, corsetry, and blazers meant nothing but business. Well, perhaps they alluded to romance, but not one that needs tending to. This season, Dion’s women have staunch structure and a schedule they stick to. 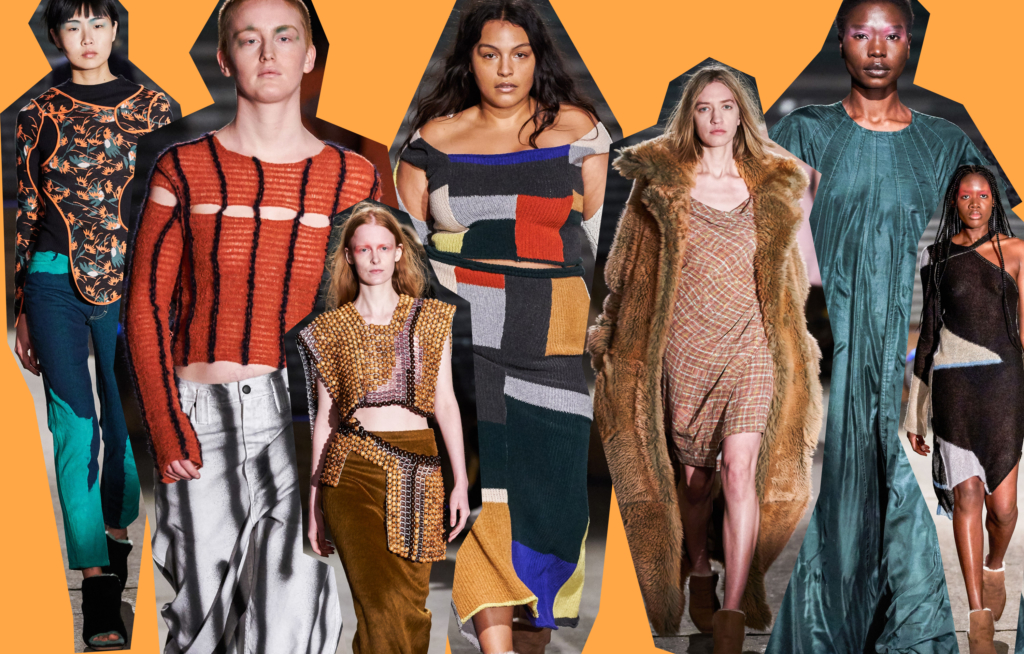 Watching Eckhaus Latta push their ideas further into the realm of luxury without getting boring is like watching your best friend thrive. It’s really restorative. They’ve always had a hot skill for sewing gently-worn fabrics into unconventional shapes, but this season she fancy. Among the patched knits and funky denim we get actual gowns and tight tailoring. It’s quirky art person who exclusively shops at small town op shops, but it’s also a person with a very expensive skincare routine. Goals. 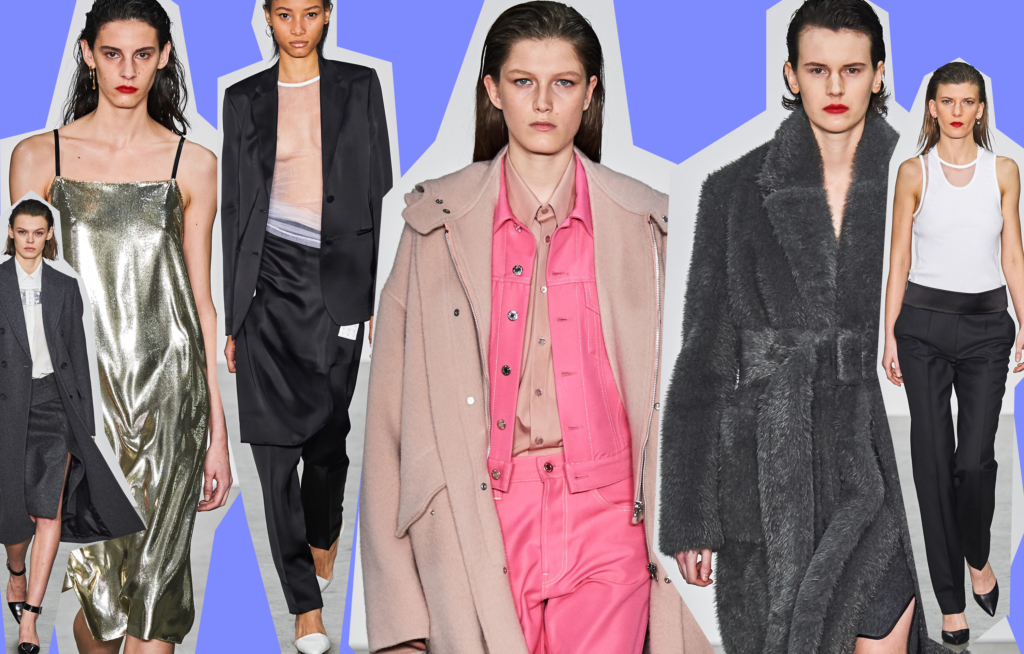 After a year and a half, Helmut Lang is back on the runway scene with Mark Thomas and Thomas Cawson at the reigns. Mark is the creative director at Lang, with a CV that includes work at Joseph and Givenchy; while Thomas is the denim expert who previously stood as the global creative director of Calvin Klein Jeans. Together, they dipped into 90s Lang refs and brought back that very cool and casual attitude. Production has returned to Italy too. Big ticks all round. 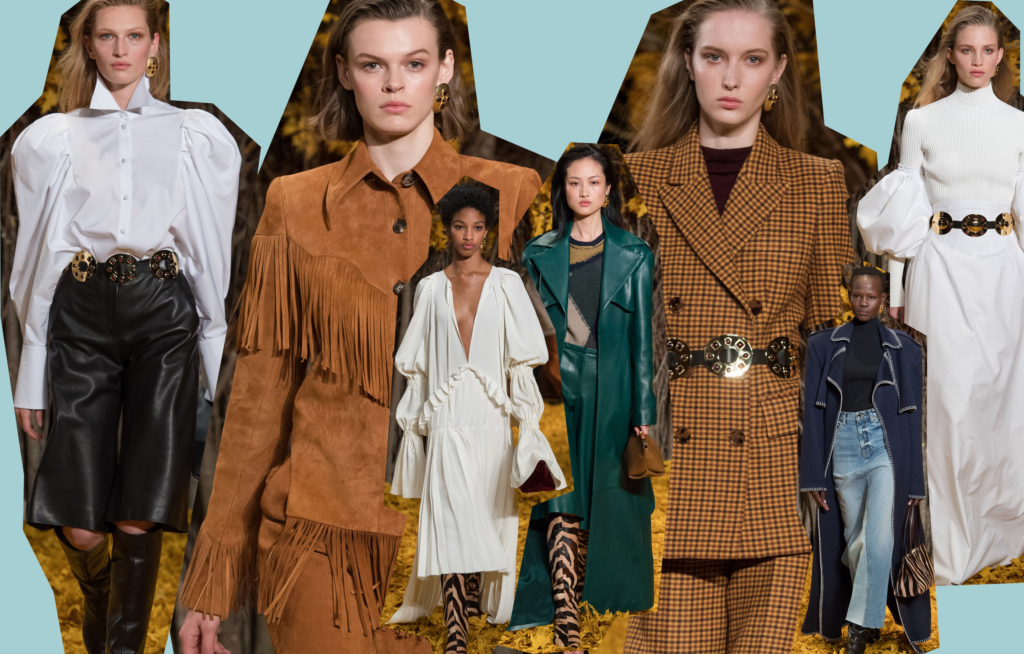 Under a tree dropping golden leaves, Khaite’s first ever show rolled out in front of an audience who were sipping martinis and all of a sudden fashion was fun again. The first look was one of mutton sleeves, from the tried and true cool-girl dress code, but the wearable drama didn’t stop there. In fact, all sleeves were particularly clever. Plus there was suede fringing, zebra boots, belts worn on the outside of blazers, and an emerald leather vibe, which all came together to really emphasise how gratifying getting dressed in the morning can be. 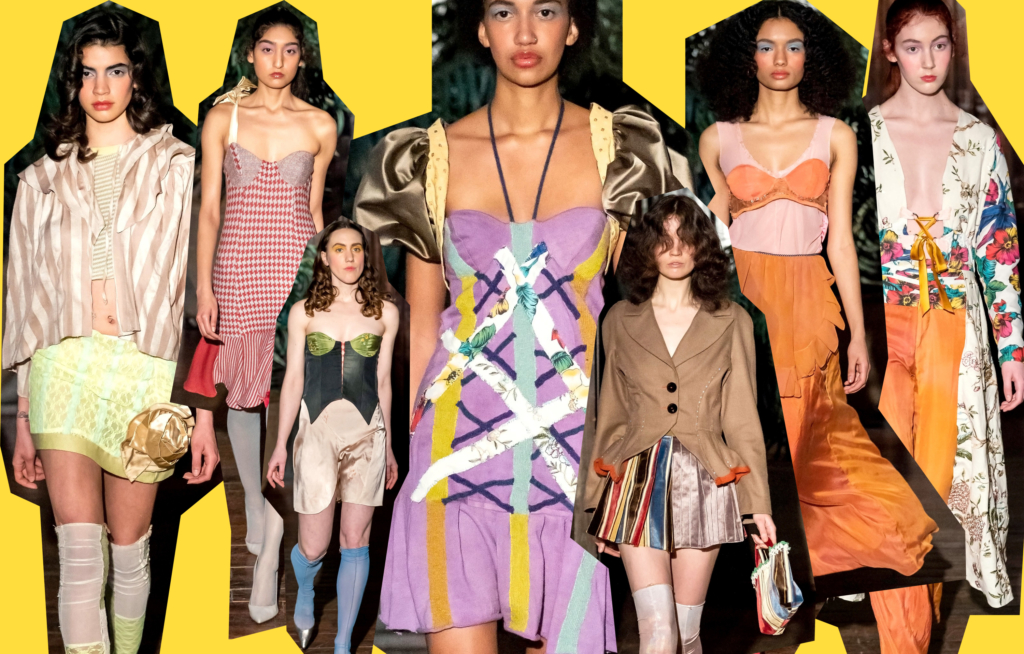 Focusing on the subtle supernatural powers women, as she does best, Lou Dallas designer Raffaella Hanley presented a collection that had a lot to do with horseback, parades, travellers and siren songs. Think candy stripes, gently medieval detailing, the loungewear of a rock’n’roll muse and DIY dolly clothes. 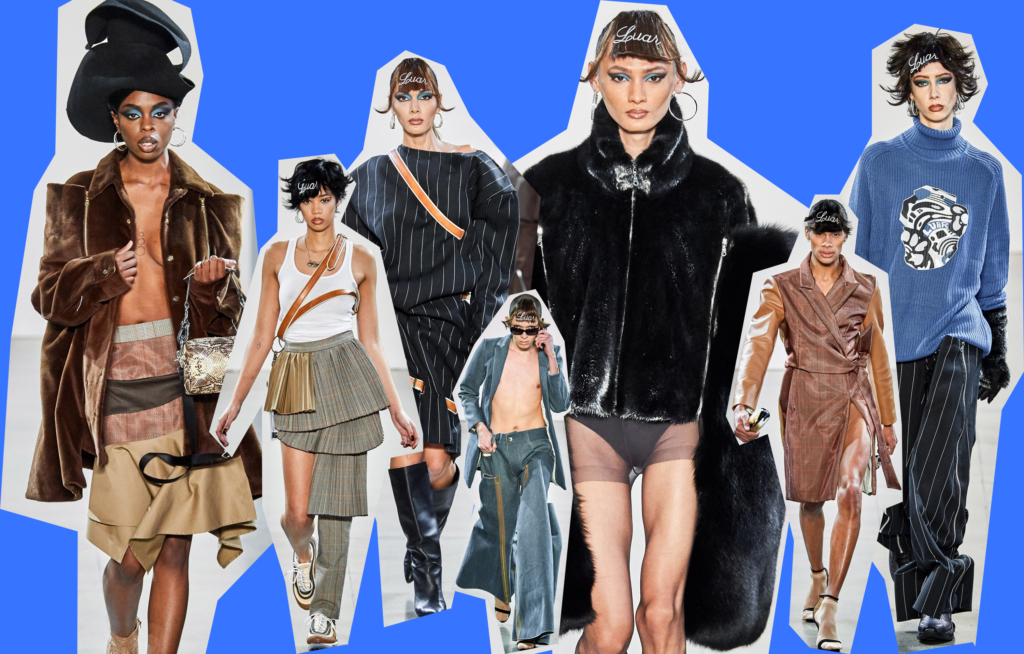 In a season of mad growth for NYC labels, Luar was certainly not left behind. This show spoke loudly of pro menswear tailoring with the added smarts of cable knits and pin stripes. Oh and the downfall of a certain patriarchy via and all too necessary tug on the collar of “male” codes of conduct. Also when and where can we buy those Luar bangs clips? 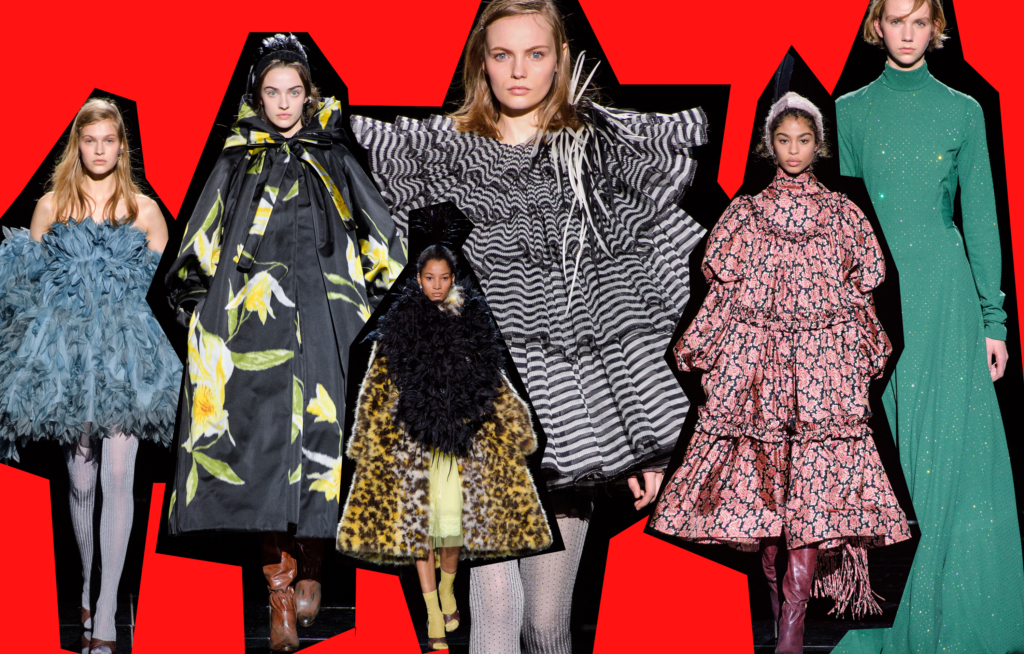 Marc Jacobs gives the people what they want with hyper ruffles and proportions that’ll make getting in and out of taxis extremely difficult but even more entertaining. We are very glad he is continuing to explore maxed out 80s shaped and we never want him to make a skirt that has less than 86 layers ever again. 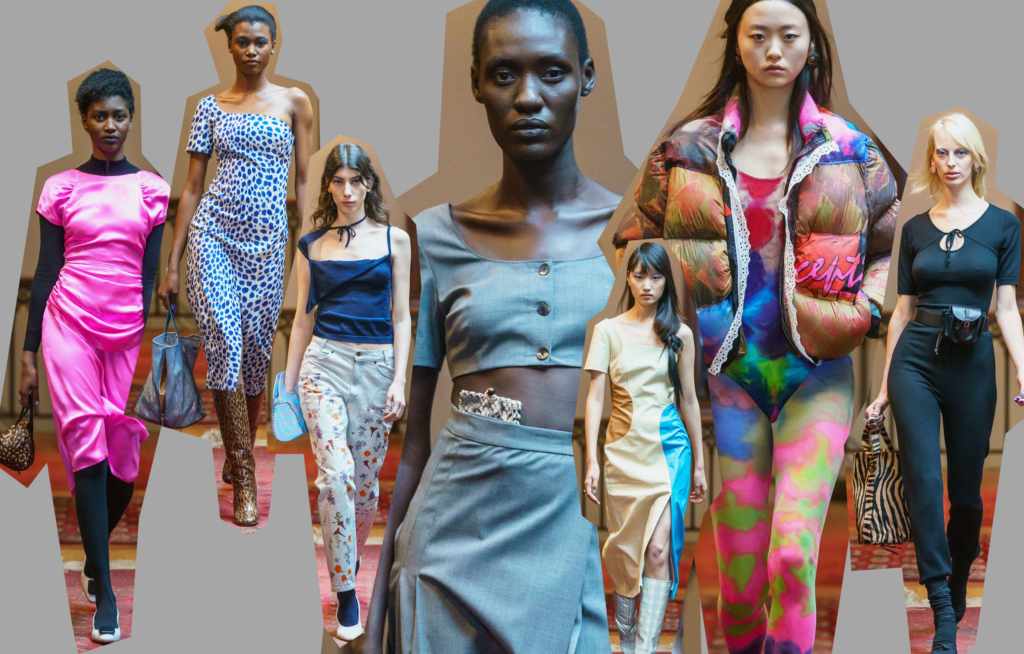 Looking daily at Maryam’s instagram account, we feel like this is who we want to be when we ‘grow up’ and ‘get it together’. Watching her clothing roll out, season after season, on women who we can both relate to and aspire to be, cements this ambition. Without making too grand a gesture, Maryam Nassir Zadeh writes our destiny in stone, season after season. And there go those coloured tights again… 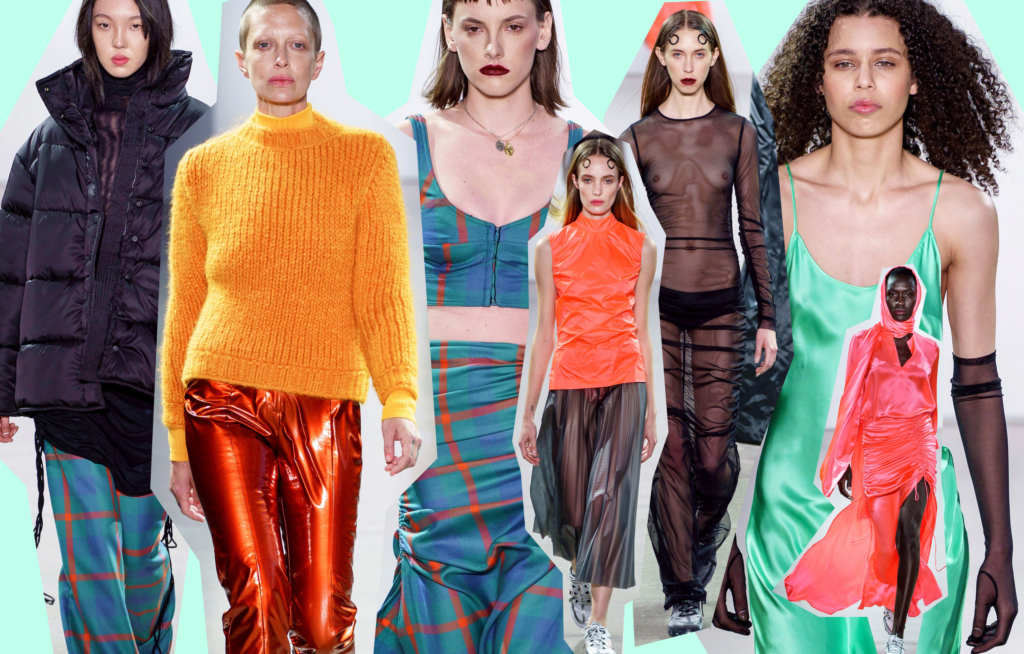 A good printed mesh and an item with a perfectly placed ruching or gather have become wardrobe essentials for casually sexy women the world over. And Priscavera just so happens to do them both, really well. This season, among a fiery palette, sits some forrest greens, workable checks and stripes and cool mints. All pointing toward a quite unexpected area of grown-upness for the label, that still has time for a full sheer moment. 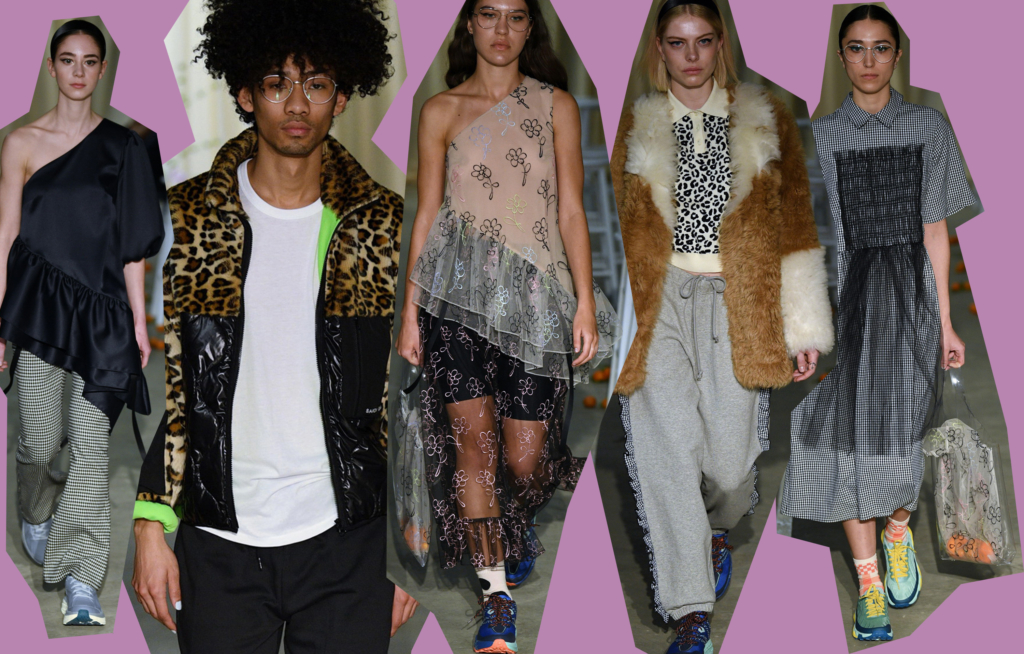 Sandy Liang shows traditionally take place in restaurants — her dad’s Congee Village or her mate’s Mission Chinese (both essential eating in NYC) — but this season she became stepped into new territory and presented in a gallery. She also stepped into unisex territory, with a hot mix of outwear that can be worn by all. The rest of the show celebrated that special way that ultra feminine wear communicates with with sporty vibes. FYI, what they say to each other is purely complimentary. 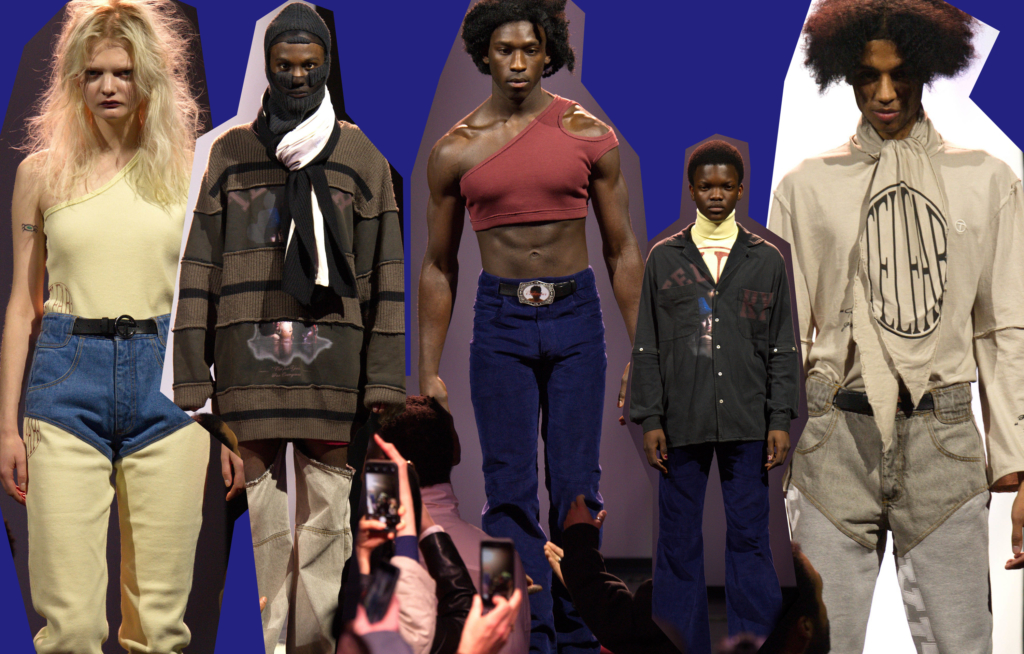 There’s no denying that Telfar Clemens has legitimate fans — as he, himself, is the ultimate fan. This time, he took his music concert format to peak encore. Models walked into a spotlight, dressed in flared denim, chaps, and cowboy gowns, and fell openly into the crowd. A nod to mosh pits and stage dives, of course, but also a demonstration of the real support his community (and fans) have given him. 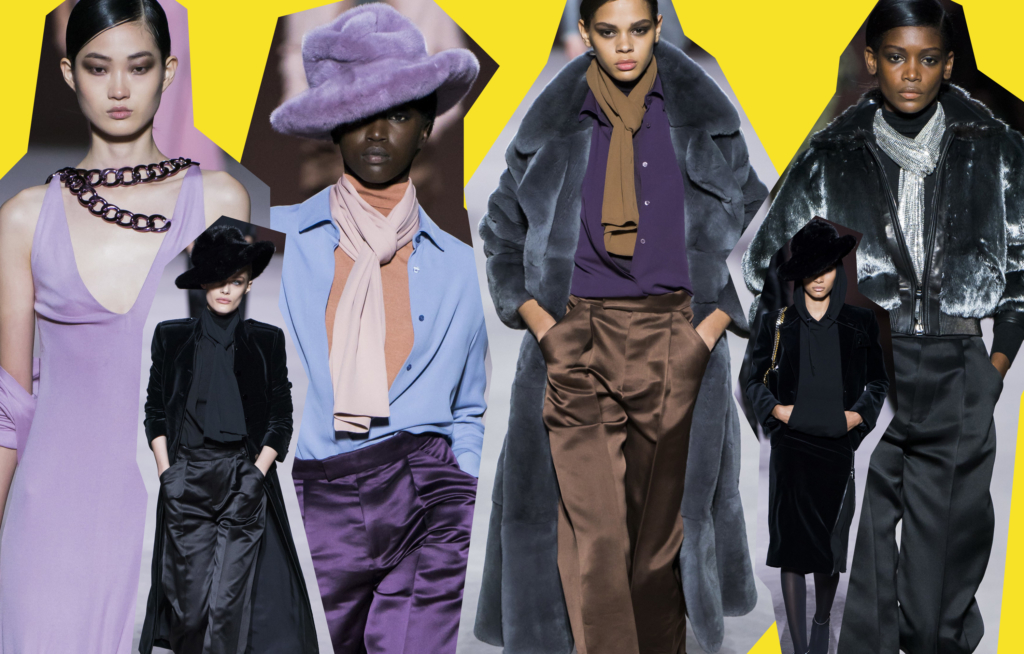 This season, Tom Ford said he felt frustrated and agitated and exhausted by the world around him (same). But you wouldn’t know it immediately from his collection — full of melting chocolates, fevered purples, blushing pinks and very textural greys. But on closer inspection, there’s a sense of zen in the tailoring. This is where he focused his energy — this concentration on careful detail is what distracted him from current affairs.