This story was originally published in Oyster Issue #116, which is available to order online at the Oyster Print Shop. 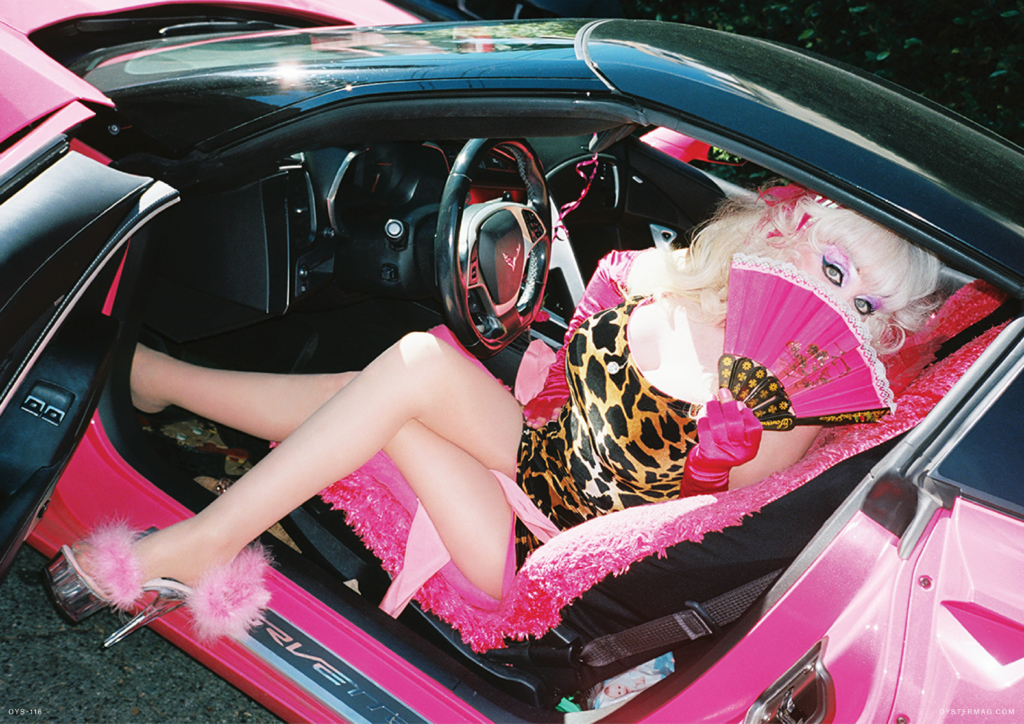 Anyone who’s ever lived in LA knows Angelyne — or at least they think they do. Driving around the city in her pink Corvette, she’s become her own Hollywood lore: there’s Sunset Boulevard, the Walk of Fame, the Hollywood sign, and The Billboard Queen. Growing up, I would get a rare glimpse of her, all blonde hair and big boobs, as she’d cruise down the 101, stopping only to sell personalised merchandise out of her trunk.

She was an expert at branding and self-promotion before it was even a thing. Before Paris Hilton ‘invented the selfie’ and Kim Kardashian took it and ran all the way to Calabasas, and before women who are really good at taking photos of themselves could turn that into a career and proclaim themselves a brand, there was Angelyne: a pink pioneer of public persona. And I was desperate to know everything about her. 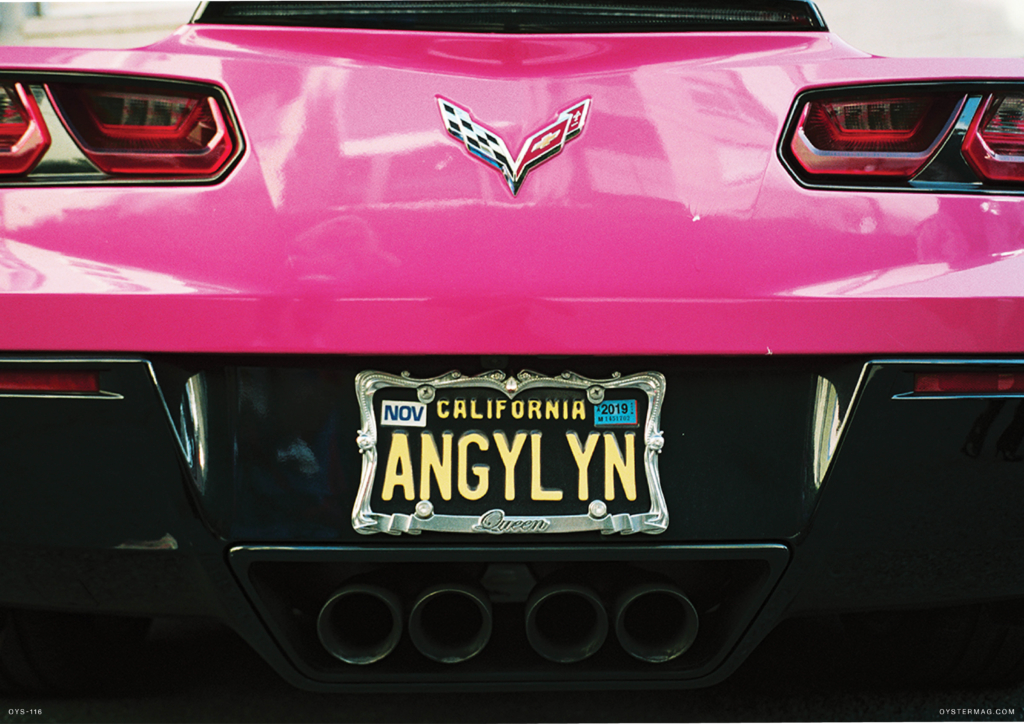 According to her mythology, Angelyne is an only child from some nondescript Midwestern state (some say Idaho; she says she doesn’t remember), whose parents died when she was young, and she moved to LA in the late ‘70s to become a Hollywood starlet.

“I used to visualise myself when I was two years old up in the sky like one of the stars,” she tells me over the phone. “Even when I was a little girl, I knew I was meant to make the world become a better place. But of course, at the time, I didn’t know through what medium.”

“Success is a high better than any drug.”

After joining her then-boyfriend’s band, and recording a couple of songs, Angelyne met Hugo Maisnik, an eccentric older man she described as a “bored prankster,” who made his money from inventing and peddling adhesive-free tape. Together, Angelyne and Maisnik came up with the idea for the first billboard — and the rest is history.

“Success is a high better than any drug,” she confesses, “and to be honest, I got kind of addicted to the attention. I became a billboard junkie.”

That much is true. From there, Angelyne released singles like ‘Kiss Me LA’ and a cover of Elvis’ ‘Teddy Bear,’ had a cameo in Julien Temple’s Earth Girls Are Easy, and collaborated with Nina Hagen, all while commissioning hundreds of bill- boards around LA and solidifying her place as one of the city’s most famous underground legends. 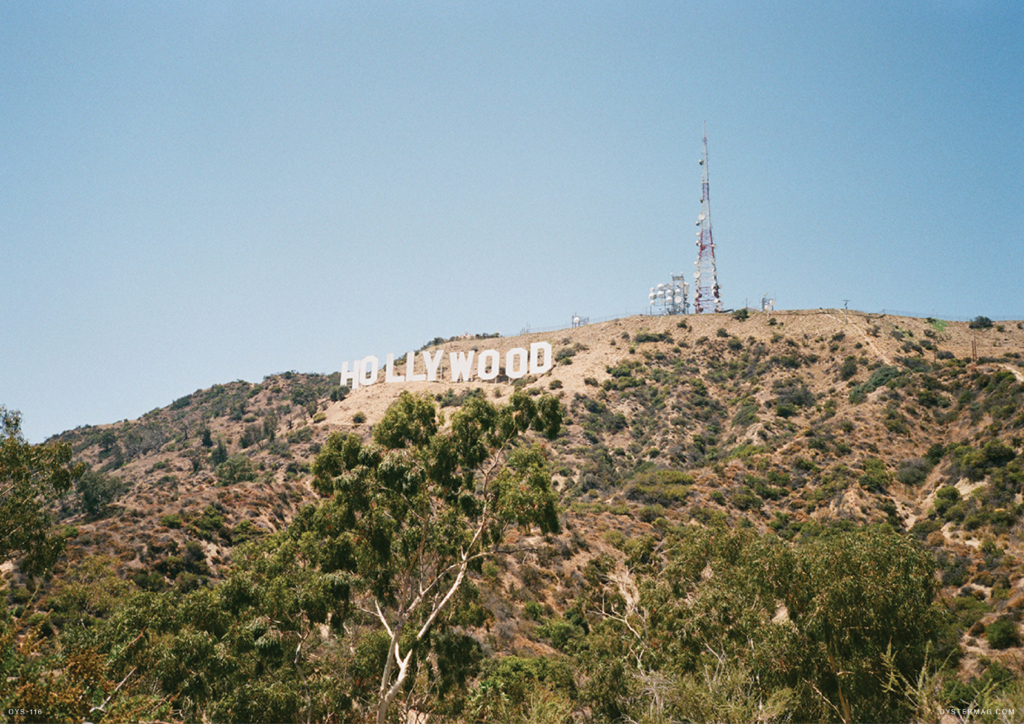 “My whole focus was to inspire,” she tells me. “Before my billboard went up, somebody said to me, ‘Those billboards are going to go wildfire for you,’ and they did. Like wildfire.”

I ask her if she sees a direct connection between what she did, and the careers of people like Paris Hilton, or the current climate of social media influencers and 24/7 branding. “I do, but mine was definitely more notorious,” she affirms.

“Before my billboard went up, somebody said to me, ‘Those billboards are going to go wildfire for you,’ and they did. Like wildfire.”

“It’s this instant gratification now — I mean, who’s going to go out, get an investor, get an image of themselves, then put up a bunch of billboards? How much harder is that than just snapping a photo? So, I’m definitely owed some credit. But I think I’m different in the sense that I promote glamour, and beauty, and music, and love, not just an everyday reality kind of thing. I like to think I inspire people to become fabulous — like a walking piece of art — like I am.”

Oh, and she hates the word ‘viral.’ “It sounds like a disease,” she pouts. That’s something I discovered about Angelyne during our conversations that I couldn’t have found online, or even on one of her billboards — she has her own “Angelyne dictionary.” Words like ‘viral,’ ‘risk’, and ‘obsessed’ — they don’t have a place in Angelyne’s vocabulary. “I use the word chance — chance is a calculated risk. I don’t take risks unless it’s for a good reason. And I’m not obsessed — some people are. Some people are obsessed with me. But I’m not. I’m dedicated.” 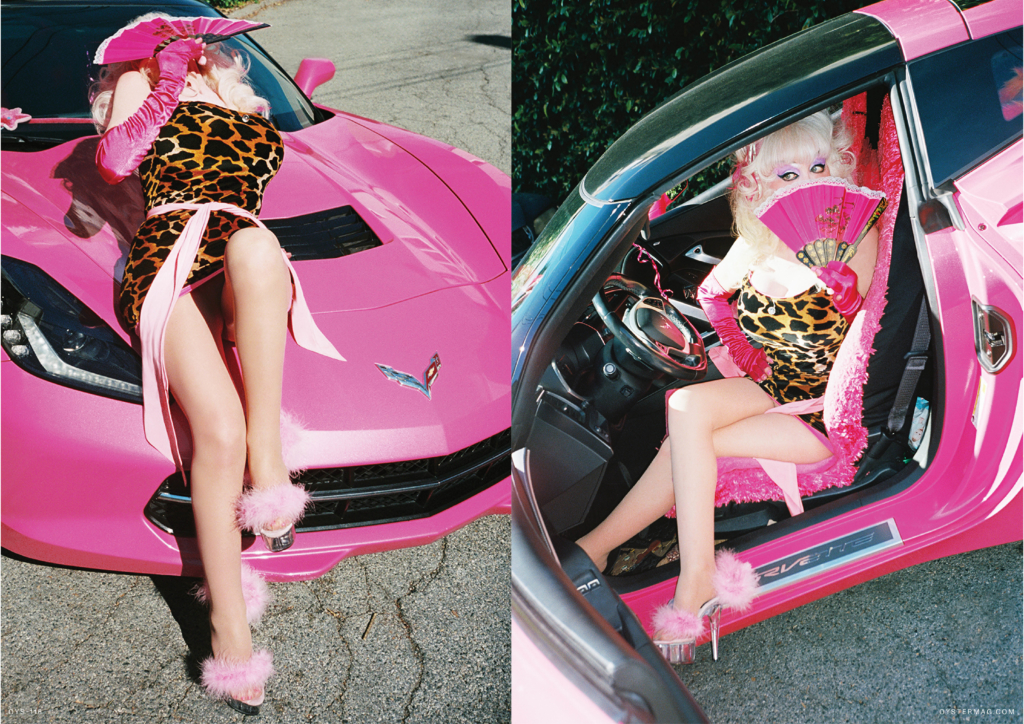 That’s also true. In the last four decades, Angelyne has put up over 20,000 billboards around the world. She’s also released countless singles and music videos, ran for governor of California in 2003 (her slogan was: “We’ve had Gray, we’ve had Brown, now it’s time for some blonde and pink”), and probably sold thousands of dollars of merch — like the Angelyne shirts we all had to buy from the back of her car as part of this interview and photoshoot process. And yet, all the while, she’s remained a total mystery. When I ask her why she thinks people are so obsessed with — I mean, dedicated to — her, even after all these years, she answers plainly: “I’m like uncut heroin.”

During the few weeks I spent getting to know Angelyne, planning our shoot, and talking on the phone, I saw how dedicated she makes people — her “disciples,” as she calls them. Even I came to be. It’s why Scott, Angelyne’s long-time manager, spends his days answering emails sent to her fan club and painting portraits of her. It’s why Jasper, our photographer, met her at a Denny’s on Hollywood and Gower multiple times, before she even agreed to let him shoot her. Why he spent hundreds on Angelyne merch before the shoot, and on pizza and brownies “for good luck” during — “I often have them bring a rabbit’s foot, pink champagne and Chanel bubble bath” she says. And why he brought her home a gift from his trip to Holland afterwards. It’s why people have made documentaries and written articles about her and, why every few years, a rumour circulates about an upcoming TV show or biopic (the latest is reportedly helmed by Mr. Robot creator Sam Esmail and will star Emmy Rossum). It’s also why Fergie dressed up as her for Halloween in 2015; and why, in 2017, a retired genealogist told The Hollywood Reporter about the time he spent trying to solve the mystery of Angelyne. 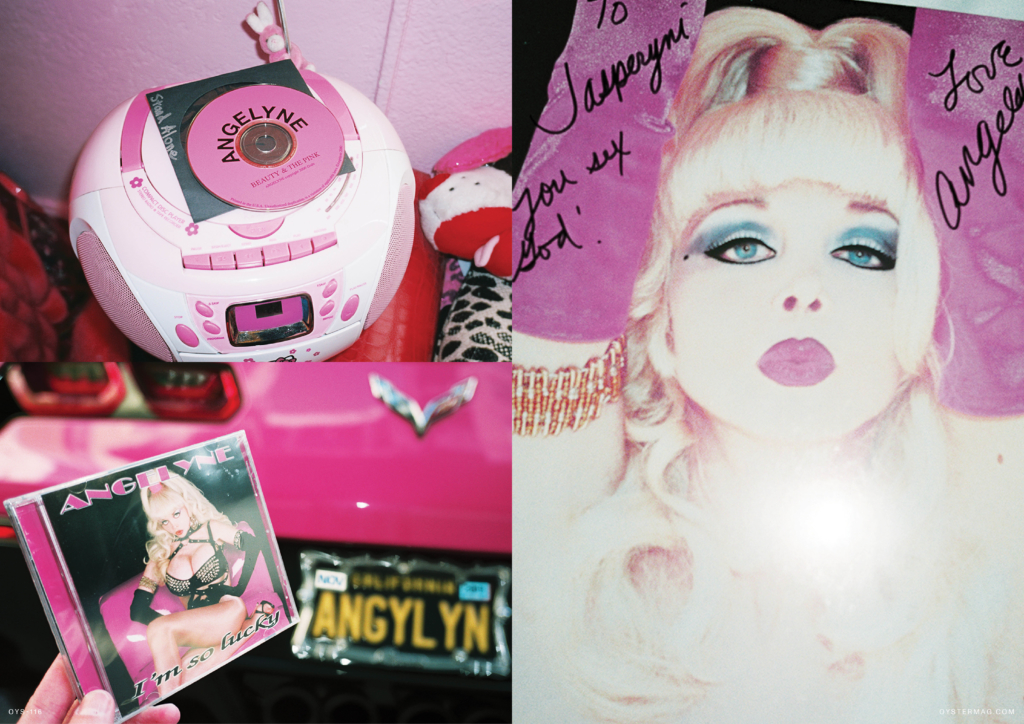 According to him, Angelyne is Ronia Tamar Goldberg, born in Poland in 1950 to two Holocaust survivors. After her birth, Goldberg’s parents moved Ronia, along with her siblings, to Israel, before eventually settling in LA, where her mother died and father remarried. The genealogist found a 1967 Monroe Senior High School yearbook photo of a redheaded then-Renee Goldberg at 17 years old and a 1968 marriage certificate. He found siblings and brothers-in-law, and, after passing this onto The Hollywood Reporter, they found an ad for a Van Nuys-area trophy business called Custom Awards & Engraving — a business supposedly run by her sister — in Angelyne’s 2005 fanzine, Hot P!nk.

For her part, Angelyne denies these claims and says she’s in the process of taking legal action against the people who initiated them. Though, I’m not sure they’re that different than the story Angelyne told me. Sure, the details are vastly inconsistent — no Holocaust, no Judaism, no Midwest or siblings or parents — but the result has been the same: the blonde-haired Billboard Queen with her pink Corvette and long eyelashes. Whatever happened before is irrelevant, and whoever she was, doesn’t matter, because who she is, is Angelyne.

“Everybody has a take on who Angelyne is from their own perspective,” she says. “However they see me, is who I am. I let my fans decide. Last week, a priest came up to me and asked, ‘Are you Angelyne?’ And I said, ‘Of course I am.’” 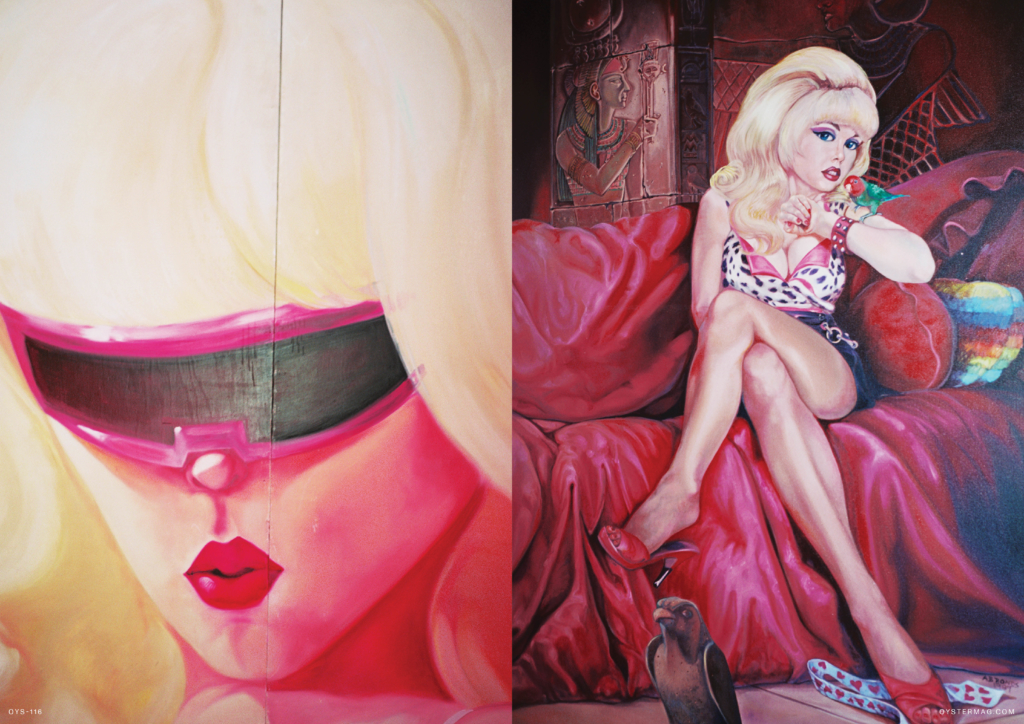 Right now, she’s focused on that, and bringing her billboards to the digital realm. “I want to make Angelyne queen of the internet and the world and the universe and cyberspace so that I can spread positive energy everywhere.” But she still doesn’t like to look too far in the future. “It’s not next, it’s already happening,” she explains. “I don’t talk about my plans, I just talk about what’s going on.”

When Angelyne speaks, she speaks with certainty — though her confidence doesn’t surprise me. After all, you can’t be too insecure when you’re blowing up photos of yourself to almost 700 square feet. It’s that she’s right, though that doesn’t surprise her: “I don’t have time to be wrong.”

As we wrap up our interview, she asks me questions about myself: “You have an old-sounding voice, you know? How old are you? Oh, what kind of band were you in?” As I answer, I realise I could tell her anything — any version of the truth as I want to share it. That’s how it works — everyone is the author of their own world, and Angelyne, at this point, is so enmeshed with the one she’s created that it’s become real. And she’s happy there.

“I don’t really think that reality is my thing,” she says. “It’s just a little gauche for me.” 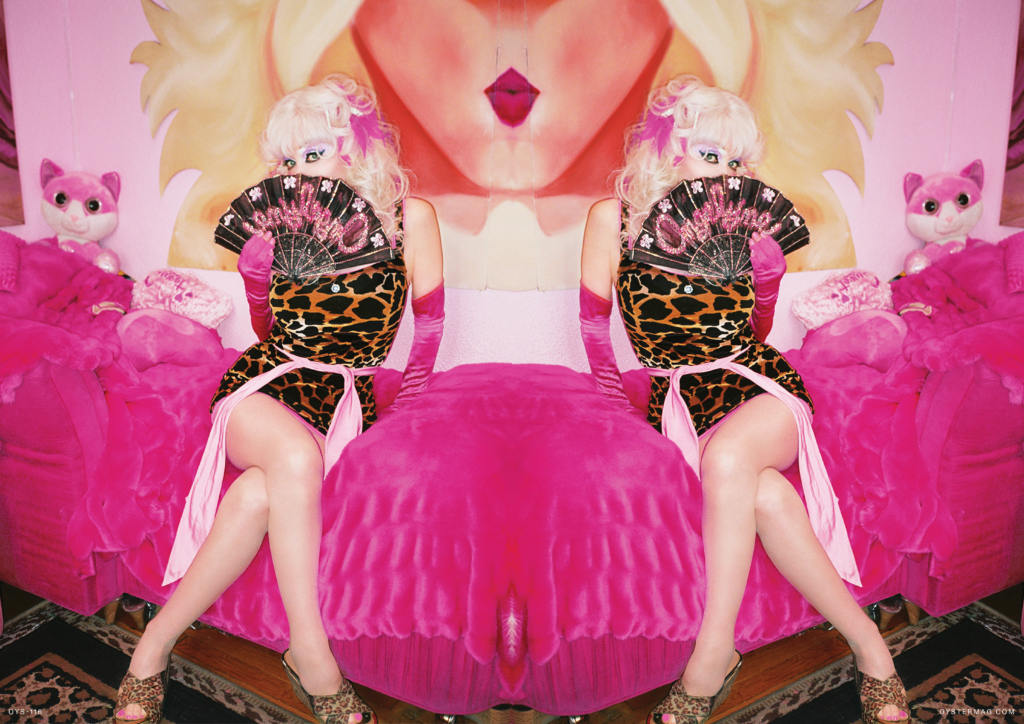