From a Malibu beach to a field of Lavender in Provence, this season’s mens shows really hit so many marks. The strongest mark of all was a very visual leaning to the opposition of thoughts and feelings coming from a place of plain white masculinity. This season, we saw more. 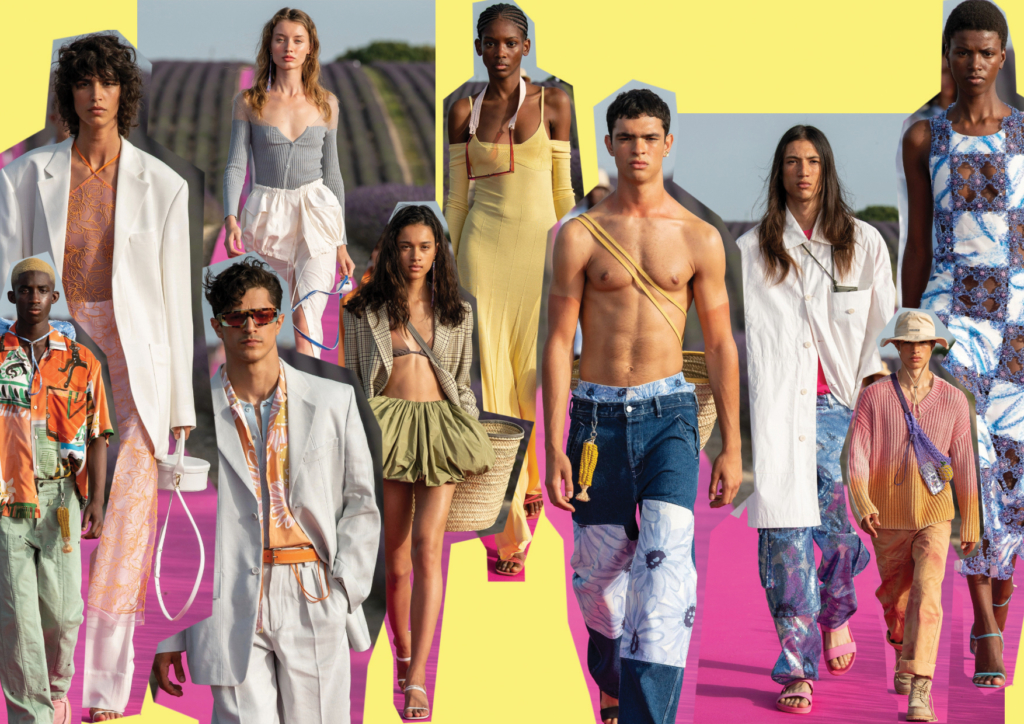 Bon anniversaire Simon Porte Jacquemus! Celebrating 10 years since his first collection, Simon invited his audience to sit among lavender in Provence. Models walked a long, long, long runway in “something sophisticated but at the same time as light as a cocktail in summer,” according to the chief. To put simply: it was sexy. Lots of sheer, lots of shoulder, thigh and back. But this time, a little more substance to the menswear — layers were clever and useful, silhouettes were commanding, almost bossy. Details were genius, from expertly styled crossbody string bags to the trucker’s tan beauty. 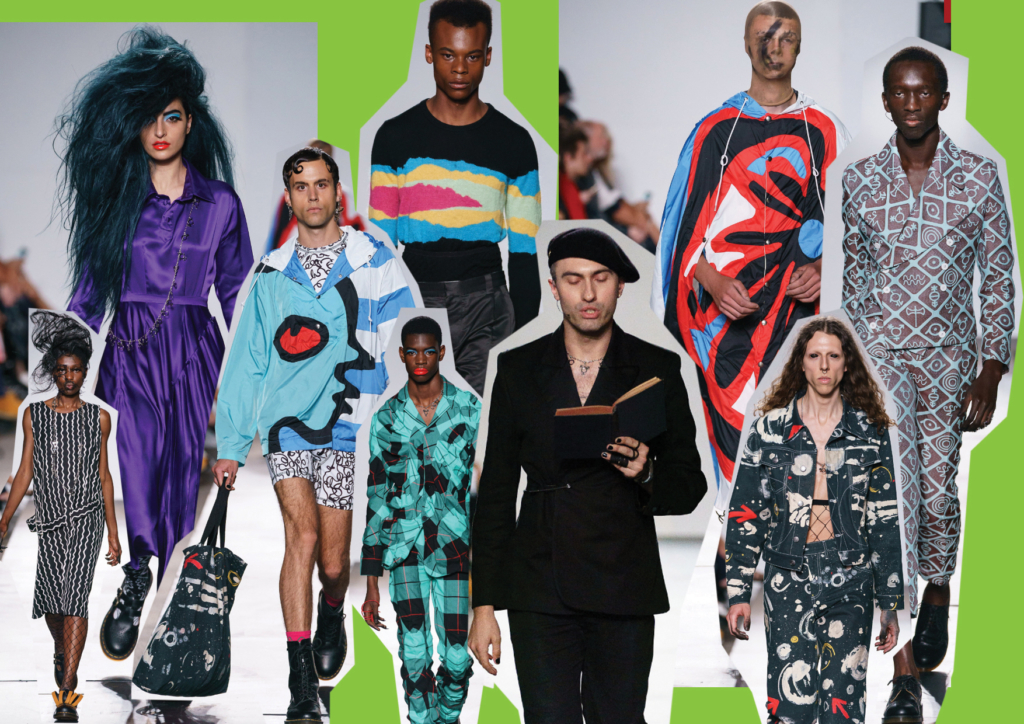 Escaping a world of chaos, Charles Jeffrey Loverboy read a passage by Dylan Thomas and had his men walk behind him inside the British Library. “The library is a great equaliser; anyone can come here and be armed with knowledge,” he said somewhere backstage. The collection referenced powerful youths of past — finely tuned tailoring went well with the DIY spirit of hand painted prints. It said something like: we do what we want, but we do it with secret precision. 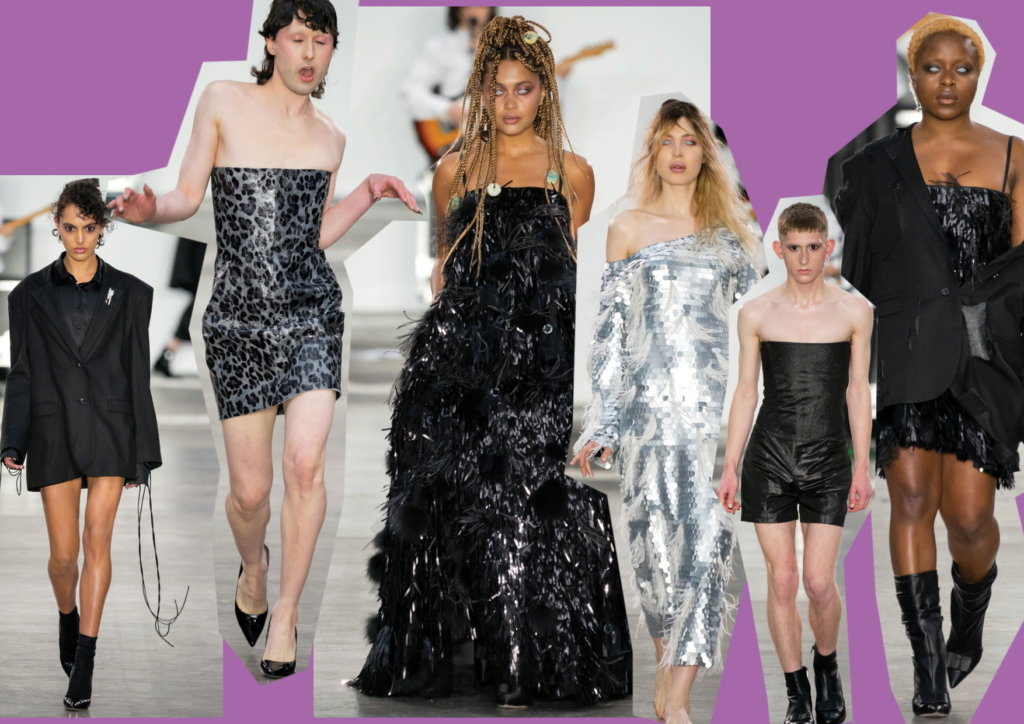 “The idea was that they were queer deities, archangels, witches,” said designer Eden Loweth. “We always want to present our models as if they are Naomi Campbell, but this season we wanted to echelon them even higher. This season we cast more transpeople than ever before, and we wanted to show each one, give them a voice.” Not stopping there with the mood, Art School referenced the Japanese horror game that we cried for in to early-00s, Silent Hill, while Anna Calvi stood in a circle of salt and sung. And the actual clothing? Inspiring, no matter who you don’t choose to be. 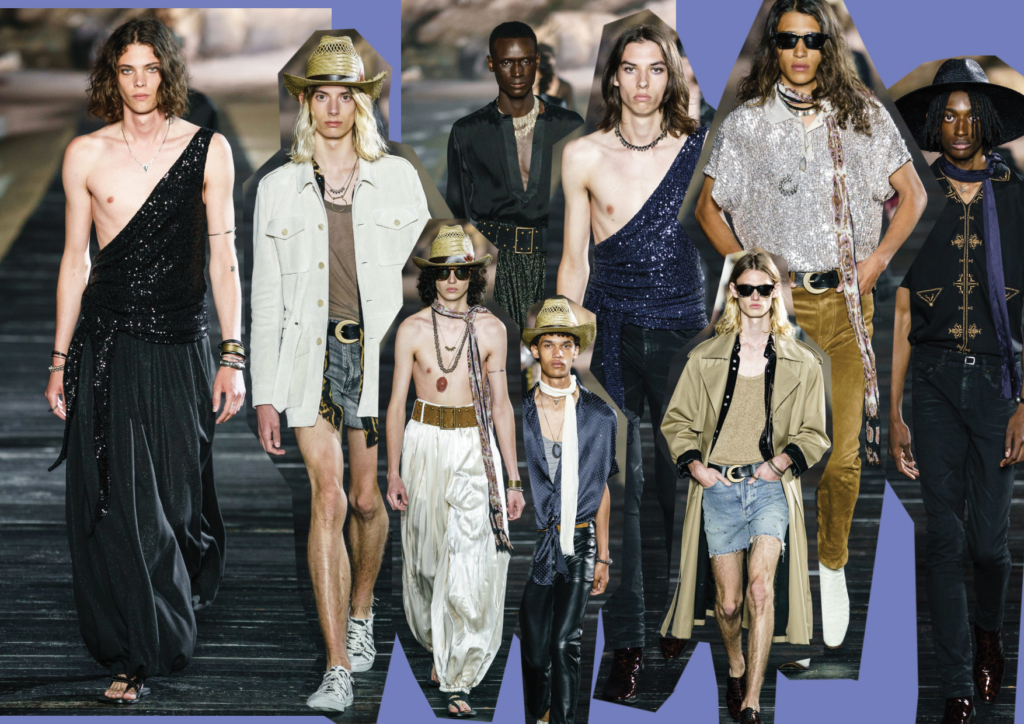 Anthony Vaccarello looked to Saint Laurent’s 70s Marrakech days and transplanted those references into a current-day Los Angeles (literally, too, via the runway being laid out on a Malibu beach). The results were a bit Chuck Bass meets Moondog (if you squint and imagine the two on their signature benders, Bass waking up in Dog’s denim cutoffs, dress shoes and neckerchief intact). The results landed firmly in Ezra Miller / Harry Styles territory, aka what men who shop luxury beyond rare streetwear collabs might actually wanna wear in 2019. 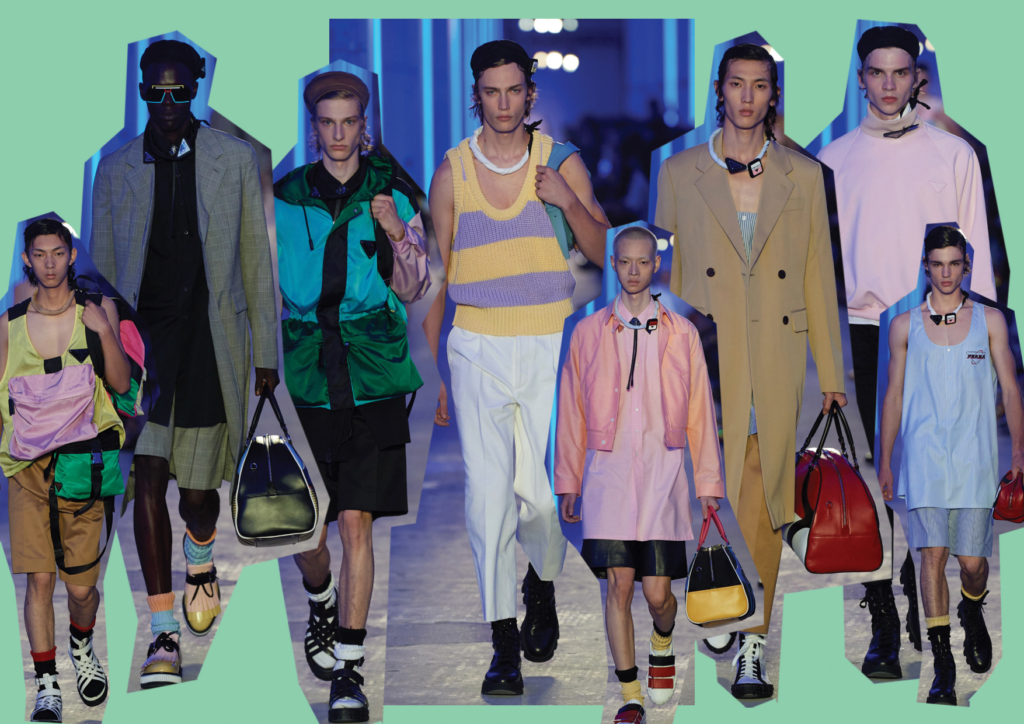 Held for the first time away from home, in Shanghai, Miuccia did not divert from her usual menswear smash hits. There were thigh-lovingly tailored shorts, exaggerated pockets, and a dip into forgotten peak trends to remind us that thing we threw away two years ago is now actually hot property — demonstrated his season with the return of the bowling bag. Altogether, the collection was a brilliant set of traditional menswear wardrobe staples, cut from boyish fabrics that feel like uniforms from a soft future. 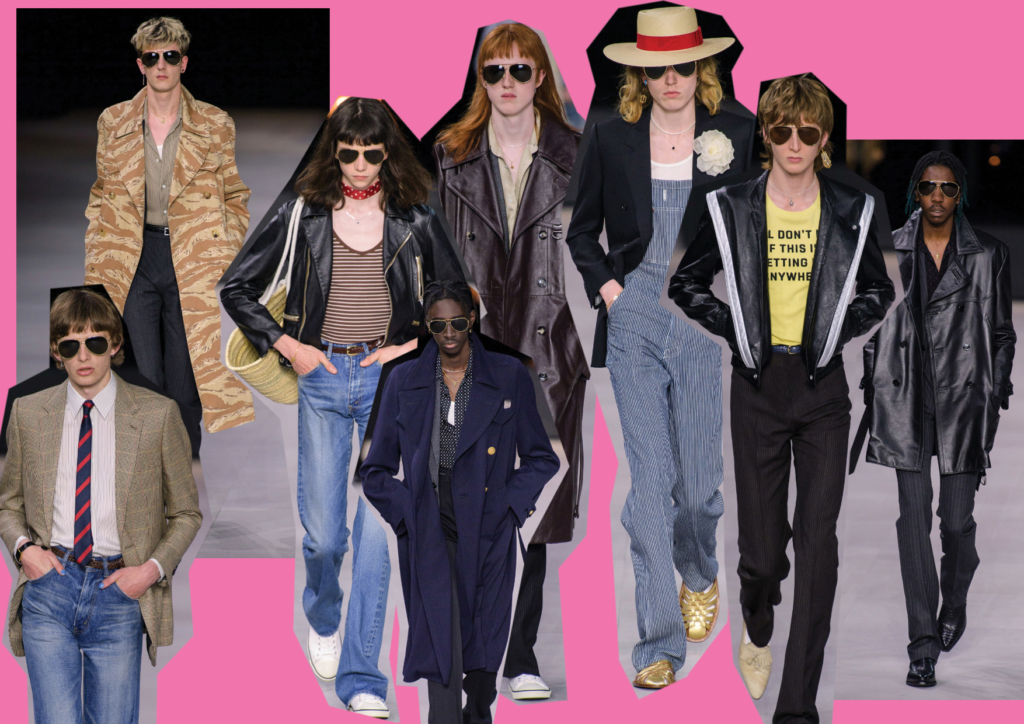 Hedi Slimane, a man forever obsessed with reinterpreting a past he was just too young to be at the forefront of, declared “I have nostalgia for things I have probably never known….There is no irony here.” Well, he didn’t, but his mate and artist David Kramer did, to introduce this collection. And so the collection spoke to fans of early-70s fashions — pants pulled too high, shoes so sharp they could hurt, sparkles, effeminacy (whatever that means today). The collection itself so widely appealing, but the show fell so short in casting. The rock’n’roll narrative, as detailed as it was down to sky blue nail polish, could have roared. But with just three black men walking, it fumbled.

Glenn Martens can do no wrong. He makes windbreaker over suiting right; he makes tiny perfectly angled bag paired with warp-tailored business garb right; he makes zipped car tire around waist right; and he makes flared and sheer man leggings so goddamn right. Such a good show, but it’s so difficult to be excited with Martens turns one out like this because it is absolutely always (with the highest compliments) expected.

Nailing it to the wall every goddamn time, Martine Rose has this real skill for pushing a brilliant narrative that is both amusing and authentic. She nodded to the fashion memories of 80s club days, and presented them on wigged out models who walked atop an astroturfed corporate rooftop. Trousers were a big hit via wide legs and weird dyes, western shirts with excessive fringe felt cooler tan costume. Floral silks peaked throughout, as well as incredibly structured shoulders. But among the playfulness, a serious comment is seen: “Promising Britain” read the t-shirts, adorned with a clown surrounded by EU stars. 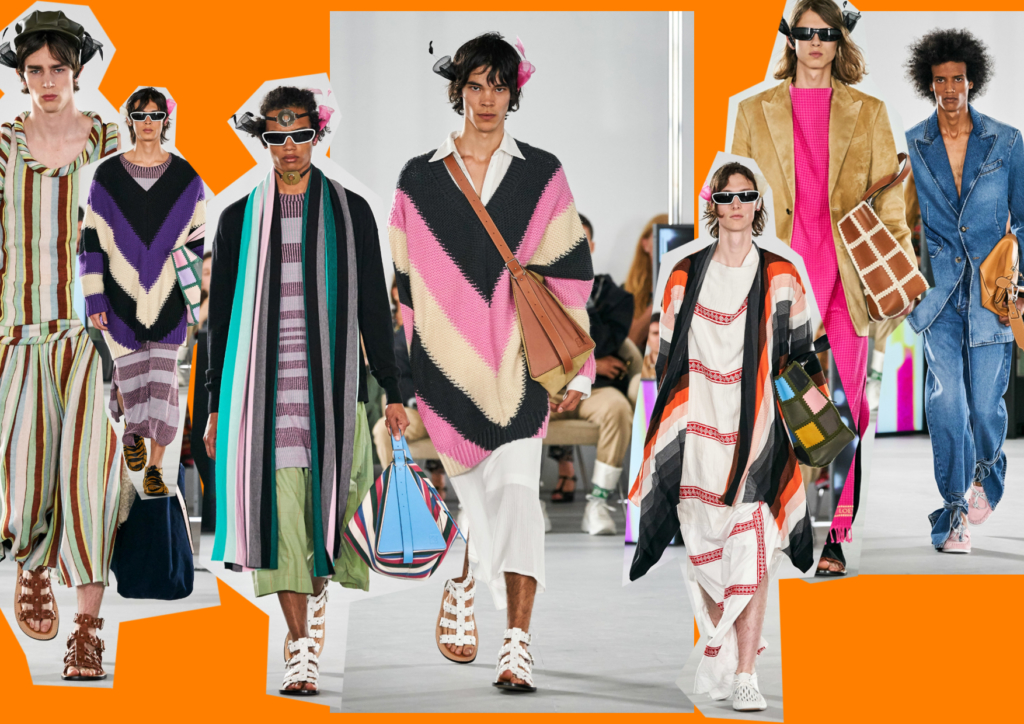 Oh my knit, JW Anderson is one talented human. Forever bridging the gap between couch surfing bong head and adult who probably collects mixed media sculptures and always has a couple of bottles of pet-nat on hand, this collection did not stray. Spacey eyewear met with long neck talismans, reworked kaftan situations breezed by deconstructed overalls… and the bags. The bags were, as always, bog pots of gold at the end of rainbow knitted arms. 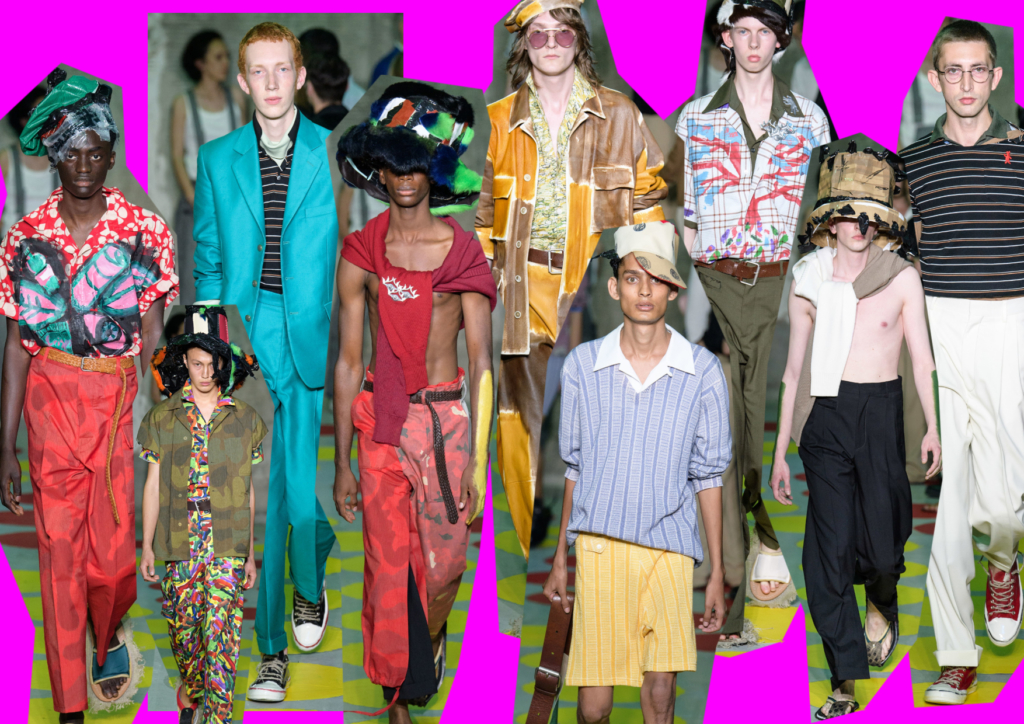 Francesco Risso sent out a line of beautiful eco-warriors who look like they’ve been obsessed with Jamiroquai for some part of their life, who walked under a giant fishnet filled with our ocean’s plastics. “We’re here, standing under the brutality of this Plastic of Damocles, to celebrate the marriage officiated by MCMagma, a shamanic non-entity which is the spirit of transformation, between Truman Capote and Ernesto Che Guevara,” was his narration. “One day, Truman decided to leave his Swans and his life of lost beauty to free himself, joining Guevara in the rebel radicalism of the jungle guerrilla. The dress code is camouflage meets carnival, the marriage being between inventive rebels and ‘50s control freaks, all looking for the Noah’s Ark in a completely corrupted fauve nature. Our nature. So there is rebellion, bur it’s a beautiful rebellion and beauty is also rebellious.” And it’s this version of real life romance, as well as the casting ofc, that makes us love Marni menswear shows season after season.