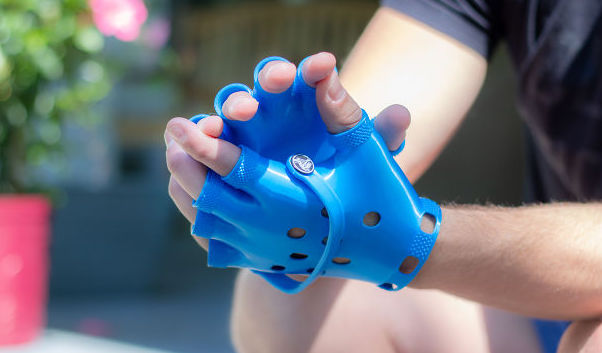 Despite the trash heap that is modern culture (influencer fraud, Chernobyl influencers, Timothée Chalamet dolls, anyone?), there are still some things that are truly remarkable. Crocs are not one of them. What is remarkable, though, is how many (and how much) people love them — and the fact that we’re still talking about them. I mean, Balenciaga did them; Post Malone did them; there’s goth Crocs… and now there are Croc gloves. It’s 2019, people! Anything can happen. KFC has a merch line!

But back to Crocs. Apparently, the people over at Unnecessary Inventions have run through all of their other unnecessary inventions, and decided they wanted to hit it big with Croc handwear. Coming in bright blue, the 3D printed Croc glove is as unattractive as its footwear counterpart, and as frivolous as the Croc charms (called “Jibbitz” for those of who aren’t as versed in Croc lingo as me) people have used to decorate their Cricks (get it? Crocs and kicks? I think I might trademark that Kimono style).

And though you really don’t need any more information than the above, if you’re curious about Croc gloves, watch the Unnecessary Inventions video below. Don’t say we didn’t warn you.