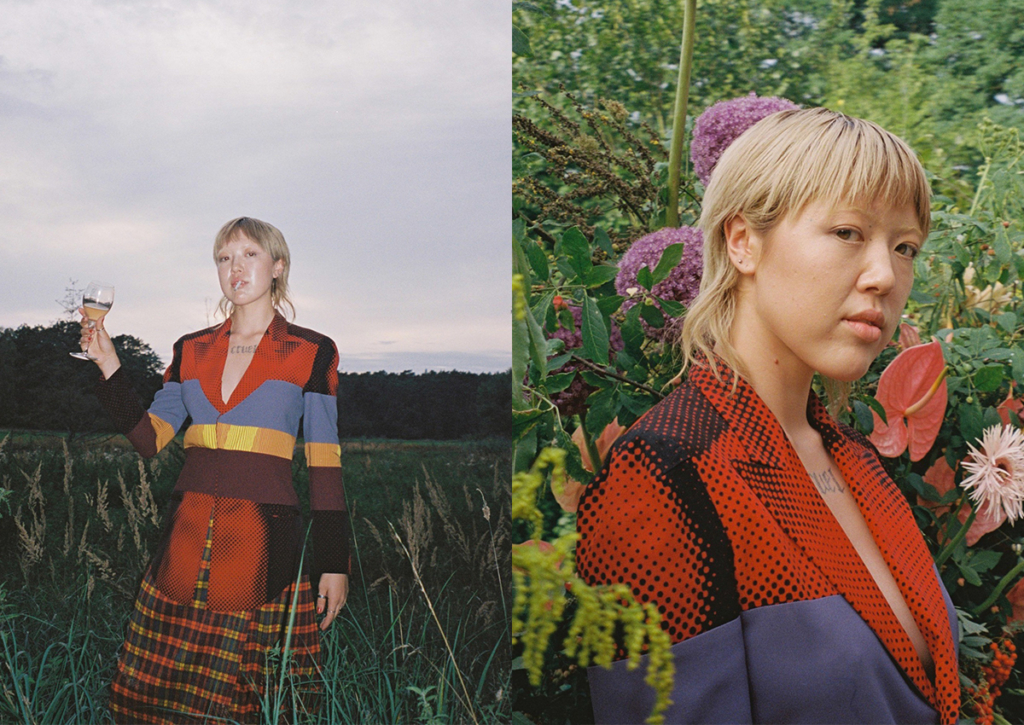 Lee Ichikawa is the Melbourne-based artist inking the sickest, spikiest and symmetrical-ist tattoos across Australia and the globe. They’re also one half of creative duo: Ichikawaedward, an artistic partnership with Joshua Edward that formed many moons ago, but more officially in 2017. Together they’re using art to communicate and immortalise queerness, and in a recent artist residency at Berlin’s ART Biesenthal they’ve done exactly that. Along with a third co-creator Marley Stucci, the trio has devised a critical (and ~aesthetic~) on-site series amongst the lush German countryside. The multi-disciplinary works speak to themes of marginalisation and othering, meanwhile shattering social norms and stereotypes — j’adore.

I met with Lee at a Berlin cafe to order the wrong coffee and discuss boy’s clubs and cancel culture, finding solidarity, and how to use your art to fuck with dominant discourse. 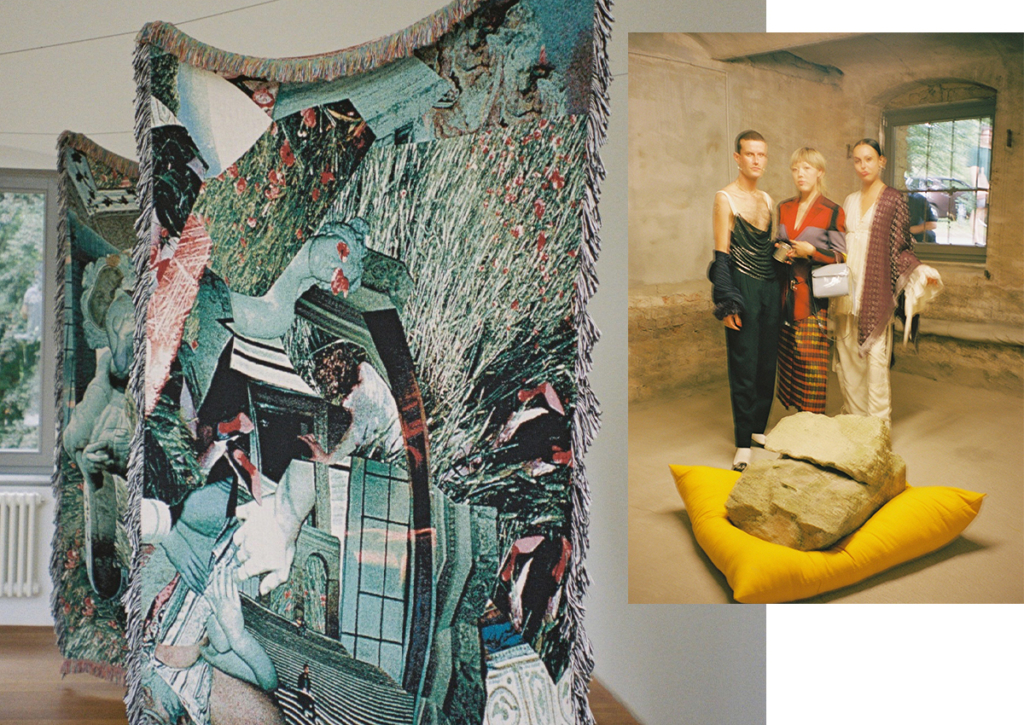 Where did you grow up and what were you like as a kid?
I grew up mostly in Adelaide and Queensland, but I think I’m still growing up! I was born in South Australia – my Mum moved there from Malta when she was six-months pregnant with me. Then when I was eight, we moved to Queensland and as soon as I finished high-school I moved to Melbourne.

I was a strange, incredibly shy kid. I barely spoke. I didn’t have many friends ­– until my sister was born – and I spent a lot of time in my garden at home playing with snails [laughs]. My mum and dad moved to Australia just before I was born and we didn’t really have a community.

What was high-school like for you?
One word comes to mind: survival. Honestly, it was traumatic –  there wasn’t really anyone like me at school and there wasn’t a community for me. I dealt with a lot of micro-aggression, tension and friction. I wasn’t mentally well either but I survived; I knew that Queensland wasn’t for me.

You’ve been living in Melbourne for a few years now… In what ways has your upbringing has shaped who you are now?
I don’t think I was allowed to be who I wanted to be for a very long time. I was so shy and afraid, and I carried a lot of baggage from growing up in Queensland. It took me a long time to let it go and move forward – to unpack all the things I had been feeling. I also met a lot of incredible people in Melbourne who helped me. 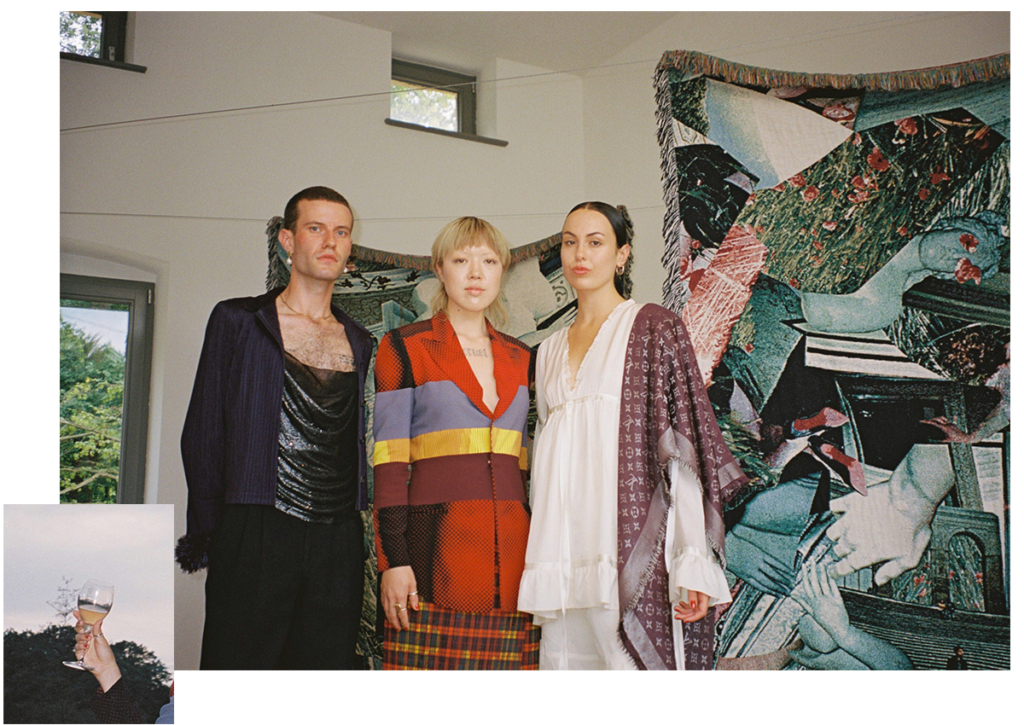 Have you found solidarity within artistic or cultural communities?
Definitely. It was hard to find at first, but with every new experience, I find more like-minded people. At the ART Biesenthal in Berlin, I met an artist called Emily Murayama who has the same mix as me, but she grew up in London. We look very different but it was fantastic because we could speak Japanese together and enjoy each other’s company – it’s also the first time that’s happened.

In Melbourne, Sydney, Brisbane – people are creating amazing work together. My friend Slam Ross just asked me to contribute to a zine with a bunch of Melbourne artists which is really exciting. A lot of my friends are part of the same community.

When did you first discover tattooing?
It all started when my current partner asked me to give him a tattoo… Normally he would give me tattoos, and one lazy Sunday we decided to switch. He wasn’t paying attention during it, and when I finished he looked down and was a little shook – he was like ‘this is really good, you should keep doing this’. Then I got a bit obsessed and it stuck! That was about a year-and-a-half ago, so I’m still a baby – but it feels nice to be seen and recognised as an artist now.

Tattooing and sculpture seem like such different mediums – one is permanent and appeals to the masses, the other is often temporary and isolated within a gallery context… What’s the relationship between these two art forms for you?
I see sculpture as a drawing in space and tattooing as a drawing on a sculpture. When I’m tattooing, I’m translating something 2D onto a 3D body. My work is also highly symmetrical and the body certainly isn’t – so it keeps things interesting. The two practises haven’t formally met yet, but Joshua and I are cooking up something special, it may take a while, but you’ll know why when you see it.

The tattoo industry has long been a boy’s club, but it feels like things are shifting, many exploitative male artists (EG. several losers on IG) are getting called out. What does equilibrium in the tattoo world look like? And what are your thoughts on cancel culture?
I think much of everything has been a boy’s club for so long – but it’s important for those who identify as male to be opening these spaces up, exercising their privilege, accommodating and fostering artists outside their own experience. I want to see more working queer and POC artists, but also see them owning spaces. Diversification of the tattoo industry is important for both the customer and the artist.

As for cancel culture, it’s always circumstantial. It’s brilliant when it’s cancelling an activity or something you hate, like I’ve cancelled rockmelon – because ew [laughs]. But cancelling people can be unproductive when it doesn’t allow for growth or education. If we’re talking about more serious situations like abuse – if someone wants to cancel an abuser – then babe go ahead, but if you’re cancelling people, you need to consider your cancels critically.

What’s the most hectic tat you’ve done?
A ten-hour stick and poke on a person named Bill – we were both a bit manic and optimistic to think we could do a huge dragon across his chest and stomach in a day. After seven hours, delirium kicked in and we had to stop. It looked amazing in the end though!

Moving from tats to sculpture, you prioritise themes of queerness and marginalisation in your art… What do these words mean to you?
Being queer and othered myself, my work is inherently informed by my own experience. I see queerness as everything outside of straight-ness and cis-ness, and marginalisation as anything deemed unacceptable by the mainstream. For those who don’t subscribe to the hegemony, it means you’re often reduced, removed and diminished – it’s harmful. So, if I put a queer body in front of someone, just through witnessing it, they’ll learn something. I just wish people would consider what’s outside their own experience and be more empathetic. There are many categories I don’t fit into and can’t fully understand ­– without experiencing – but I need to consider them in my art practice and life.

What advice would you give someone wanting to learn about and/or fuck with dominant discourse?
Firstly, exist [laughs]. Secondly, listen. Thirdly, contribute – and remind yourself you’re worthy.

You often work in collaboration as Ichikawaedward – Joshua Edward is your artistic other half – what have you learnt from them since beginning your collaboration in 2017?
They’ve given me the confidence to pursue what I want in this world and the determination to achieve what I didn’t think was achievable. We officially started collaborating in 2017, but we’ve been good friends and making work together since long before. 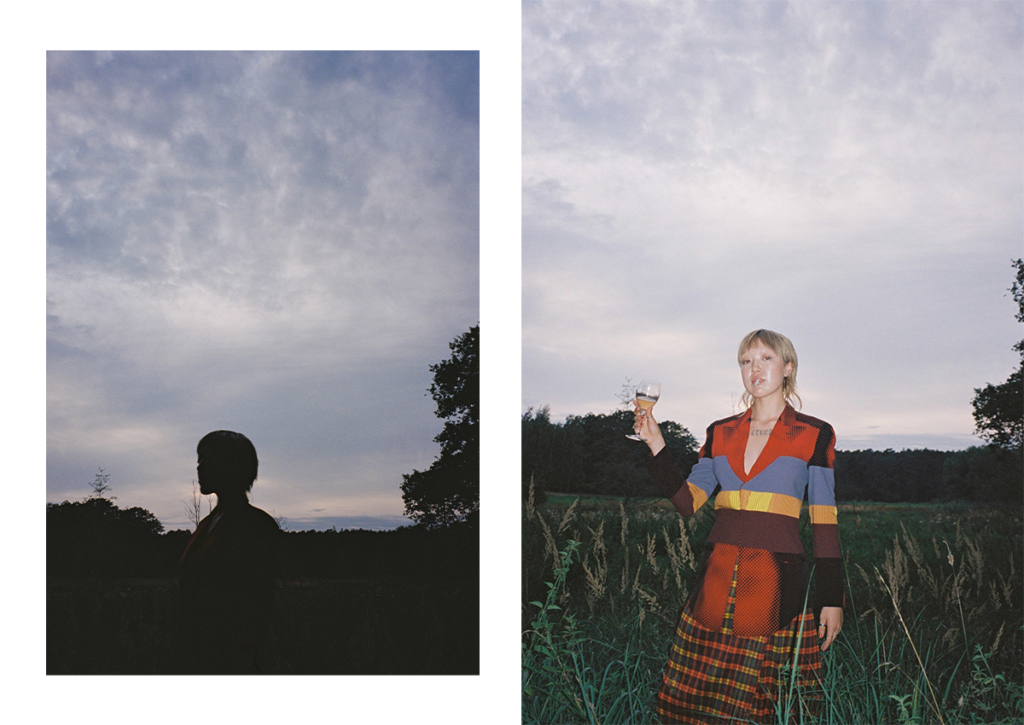 You’re currently exhibiting at the ART Biesenthal in Berlin, showcasing collaborative works made with Joshua and another Melbourne-based artist Marley Stucci, can you tell me a bit about this process?
The works were in motion for quite some time, we heard about the residency in February and we were on opposite sides of the world. Josh had moved to New York and Marley and I were in Melbourne, we met in April – not in the middle but – in Berlin. It was our first residency, so we wanted to respond to the site itself – what it meant to us, what had happened there before… We prepared some works back home and brought them over with us. For a lot of it, we were juggling different timelines and time-zones, but we brought it together in the end.

Making work online and using modern technology is also essential to our practice, so this time we used some automated weaving machines and large digital printers – my brother in Malta actually helped us print the fabric works. Then we had to move a 400kg boulder – which was a piece of rubble left over from a building once a part of the ‘Palast der Republik’ – so that was heavy [laughs]. We wanted to create a site-responsive work that comments on architecture’s ability to marginalise and other the queer body in space.

What scares you the most about your future?
The absolute uncertainty of it all – I didn’t think I’d be a tattoo artist a year ago and here I am! I didn’t think it was possible to be given these kinds of opportunities…

That sounds exciting?!
It’s equally exciting/scary… I don’t know where I’ll be this time next year – but yeah, it is exciting! I’m eager to grow and learn and find out who I’ll be. 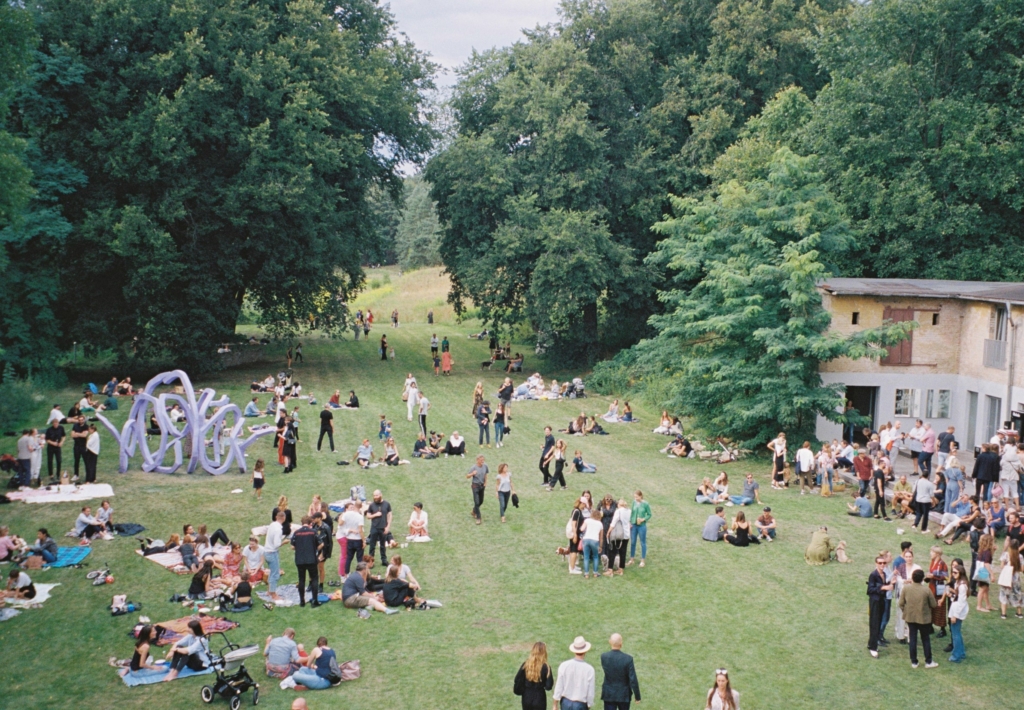 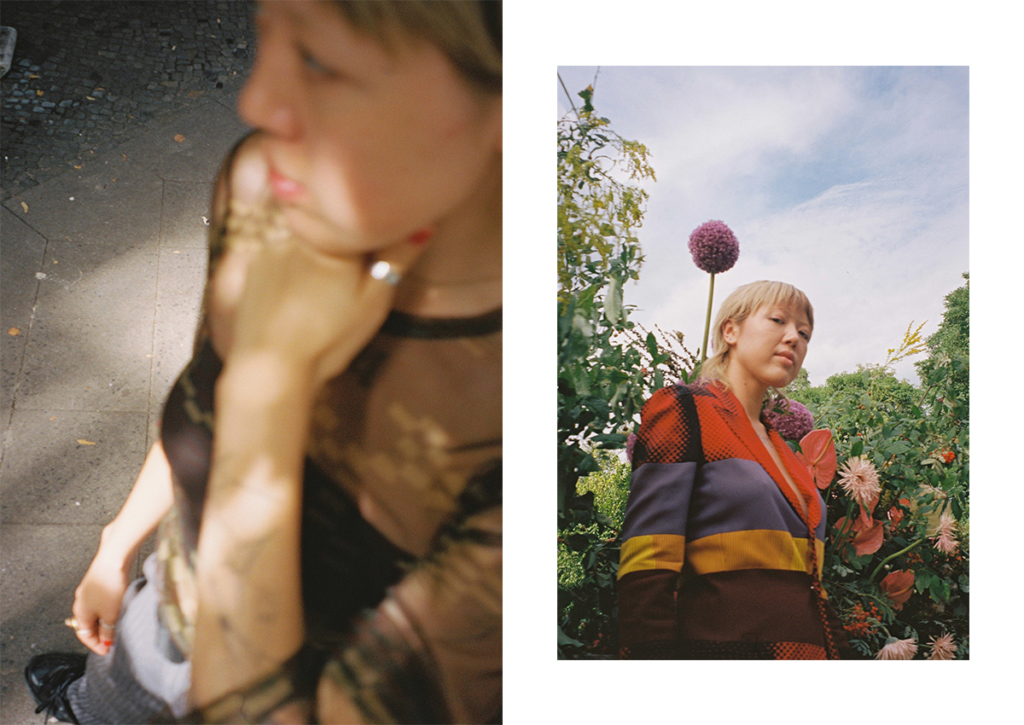