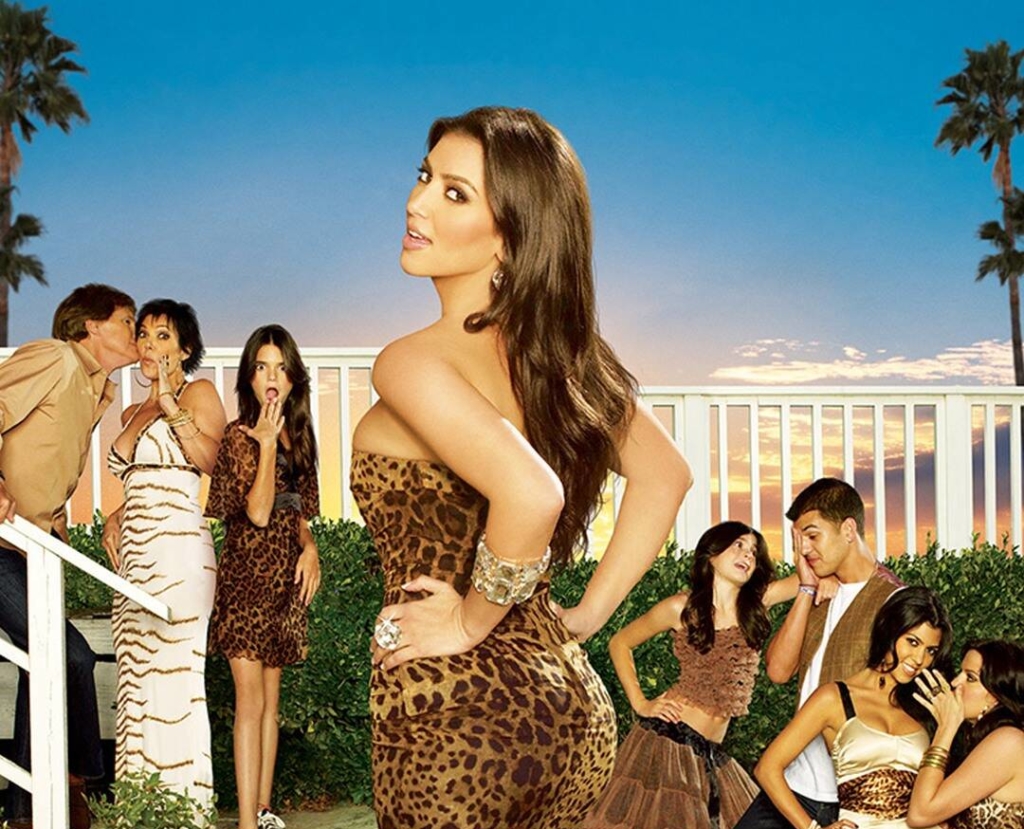 And the hits just keep on coming. If 2020 wasn’t already hard enough, the Kardashians announced this week that Keeping Up with the Kardashians is coming to a close after their 20th season airs next year. Naturally, everybody on the Internet is feeling like this:

But while others have been busy grieving by sharing their all-time fav moments from the show, we’ve been reminiscing on all the lessons we’ve learned from the world’s most famous family.

So, here are 20 Kommandments that we’ll carry with us long after the show ends:

1. NOT EVERYBODY SHOULD BE A RECORDING ARTIST

It’s no secret that the Kardashians are capable of almost anything — or, at least, Kris Jenner is capable of making almost anything happen. Keyword: almost. The only thing the Kardashian matriarch has failed at is making Kim a pop star. Back in 2011, Kim recorded her song “Jam (Turn It Up)” during an episode of Kourtney and Kim Take New York. Produced by The Dream, the song made waves when it came out, but not the right kind. Kim has since said it’s her biggest regret in life.

2. DON’T GO SWIMMING WITH VALUABLES ON

2011 wasn’t the best year for our dear Kimberly. Not only did she record her single, but she also temporarily lost her giant diamond earring in the crystal clear waters of Bora Bora on an annual Kardashian family vacation. Of course, Kourtney put her little sister in her place by reminding her that there are people who are, in fact, dying in the world. Honestly, we would be pretty bent too if we lost our jewelry in the ocean. But the lesson here is simple: leave your nice things at home when you’re hitting the water.

After 20 seasons, there are far too many girls trips to choose from, but one of our all-time faves is when Khloé and Kourtney lived their best single lives in Turks and Caicos. While the trip wasn’t without drama (Kourtney’s friends literally could not stop fighting), it goes to show you can still have a good time with your girls even when your relationship troubles are splashed all over the tabloids.

4. BUT YOU ALWAYS NEED FRUITS AND VEGGIES

The salads on this show are actually an insanely hot topic, believe it or not. A quick Google search proves that the Kardashian-Jenners are literally always eating salads, and the greens they’ve been eating have even attracted a ton of media coverage. So yeah, we now live in a world where Kourtney has been able to build a booming business off her famous “Signature Salad.” Here we are: it’s half an avocado, two hard-boiled eggs, a tomato, balls of fresh mozzarella, salt, pepper and olive oil. Because we know you were curious.

Rob has been missing from the last few seasons of KUWTK, but he was always a source of drama when he was on the show. In season 12, when Kendall found out that he re-gifted the iPad she bought for him to his then-girlfriend Blac Chyna, she was rightfully livid… of course she was going to find out! She even called up her brother to ask him to return it to her with Kylie standing by as silent back-up. So, don’t re-gift things people get you. Or at least, not in the same circle.

6. THOU SHALT NOT STEAL

True for the Ten Commandments, true for the 20 Kommandments as well. During season 11, Kim and Kanye imported ten super rare marble slabs for their new house that they stored at Kris’ Calabasas compound. Of course, Kris ended up taking and using the slabs on her own countertops, which led to Kim threatening to invoice her mom for the ridiculously expensive stones. Definitely don’t steal Calacatta Gold marble, or anything else, from your loved ones without asking first. But that reminds us, what kind of counters do you think Kanye’s domes would’ve had?

Without Kris, there would be no Kardashians. So, we’ve gotta pour one out to the one who started it all. Of course, all of the Kardashian-Jenners have paid their respects to their momager at some point throughout the seasons, but we wanted to take a moment to show some love for the real woman behind it all: MJ. Cut to the scene where Kris gifted her mom a pair of Adidas sneakers with a secret tracking device implanted inside the soles. Protect MJ at all costs.

8. AND LOVE THY FRIENDS

While Kim’s musical legacy was short-lived, her mom’s surely isn’t. For her 30th birthday in 1985, Kris recorded an iconic original song and music video called “I Love My Friends.” And for her 60th birthday, her daughters and friends all recreated a rendition of the song. Who needs family with friends like these? Well, Kris still does — they’re her job.

Scott is definitely the show’s underdog. He’s been through it, but we all love him despite it all. So, perhaps no moment on the show is more epic than Scott officially becoming Lord Disick before our very eyes. On a trip to London back in season seven, Scott was set on becoming British royalty, so he brought Rob along on his trip to obtain his official title. The key takeaway here is that you should manifest your own destiny.

You might remember Kendall’s involvement in a god-awful Pepsi commercial where she fixed racism and police brutality with a can of Pepsi. It was a bubbling and catastrophic disaster. The real issue at heart here is performative allyship; so, take this time to acknowledge your privilege, be empathetic, and educate yourself on the ongoing racism and struggles that others are facing so that you can be an actual ally. Here‘s a list of resources to help you.

There’s, like, a billion moments to choose from where the family lets loose on the show, but Kris Jenner is always the life of the party. The OG momager always makes it a point to demonstrate the importance of taking a break and enjoying yourself once in a while — or as often as you need to. Also, Khloe’s drunk Kris impression is nearly as good as the real thing.

The family’s biggest controversy since #snakegate with Taylor Swift is when Kylie’s bestie Jordyn Woods was caught canoodling with Khloé’s ex and baby daddy, Tristan Thompson. The chaotic disaster led to a lot of trauma and tough conversations amongst everybody involved, with Jordyn ultimately getting excommunicated from Kylie’s house and the family’s life. Trust is hard to win back when lost, so in Kim’s words, just “don’t be fucking rude.”

KUWTK experts know that stripper poles have, for whatever reason, become a recurring motif throughout the show. From a tweenage Kylie and Kendall playing with Kim’s pole in the series’ pilot to Kris crashing Kim’s pole dancing class, it just goes to show that age is nothing but a number. The 64-year-old mogul not only crashed Kim’s class but was its shining pupil. Channel that energy.

Things haven’t always been shapewear and lip kits for the Kardashian-Jenner sisters. Way back in the first season, Khloé got arrested for a DUI, and in the third season, she actually went to jail for violating her probation. Cue Kris chastising Kim for taking selfies on their ride to take Khloe to jail. It’s made the history books.

Retail therapy and shopping addiction — semantics, Kim-antics. Sometimes you need to get over it and treat yourself to what you deserve. And in Kim’s case, all the time, especially back during season three of Kourtney & Kim Take Miami. Not all of us have the credit line that Kim has, but that doesn’t mean the lesson isn’t buried somewhere under all of those designer shoes.

Like Kim with her car selfies, the Kardashian-Jenner’s know the importance of staying true to you. When Caitlyn Jenner introduced herself to the world, the whole family watched as she spoke up about her past struggles to come to terms with her own gender identity. Take it from Caitlyn; it’s so important to remember to do what’s best for you, even if not everyone will be supportive.

Wise words from mama Kris after Kourtney’s nudes leaked: “it’s a case for the FBI.” Or another Kardashian. Time and time again, the show attests to the family’s sharp ability to do some digging, like the time Kim exposed Khloé’s boyfriend for shady behavior by going through his voicemail. And while you might not like what you find, sometimes you just have to listen to your intuition.

18. AND TAKE MATTERS INTO YOUR OWN HANDS

When Kourtney delivered Penelope and Mason, she reached down and pulled both babies straight out of her own body. It drew tonnes of attention on the internet and on news channels, but hey, sometimes you have to get your hands dirty. And if you want something done right, do it yourself.

19. TAKE CARE OF YOUR MENTAL HEALTH

One of Rob’s most underrated and important contributions to the show has been his realness in documenting the struggles with his mental health, specifically his depression and insecurities about his weight. Back in season eight, he candidly opened up to Lamar in front of the cameras, and it really shows how essential it is to speak up about what you’re going through. Say what you want about the family, but they are always there to support each other.

20. NOTHING GLITTERING CAN STAY

It’s far from the end for the Kardashian family, but we can’t say we won’t miss seeing them on TV all the time — I mean, we still will, but news stories and reruns just aren’t the same. So, we’ll wrap this up with one of our favorite videos. It’s actually not from the show, but Kanye made Kim a compilation from their old home videos for her birthday. It brings us back to the family’s simpler beginnings and reminds us to appreciate life while we’re living it.