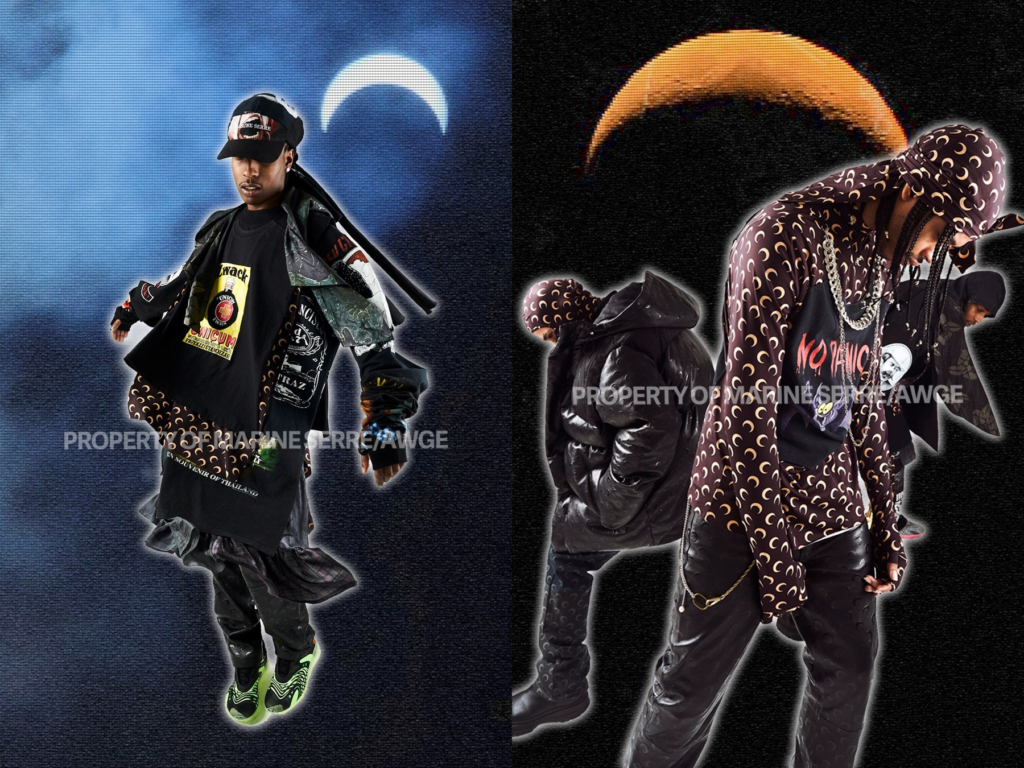 It’s been a good week for collaborations. First, Gucci revealed their Gucci x The North Face capsule, and now we’ve got Marine Serre x AWGE. That’s right, our fave French futurewear designer has teamed up with A$AP Rocky and his creative collective. Titled the “Regenerated” capsule, the collection features a ton of dreamy pieces, including leather pants, a denim jacket and a hooded dress, as well as accessories like durags and hats covered in Serre’s trademark crescent moons.

Rocky first hinted at a collaboration last Fashion Week, when he shared a photo of himself wearing a jacket co-designed by Serre and AWGE. But truly, we all thought this match made in heaven (or on the moon?) was too good to be true. Turns out the cosmos have aligned to give us a Christmas miracle — and after this year, we think it’s long overdue.

Made with approximately 75 percent regenerated materials, the collection came as a result of “common interests, genuine conversations, and a strong sense of community,” Serre said about the partnership. “Collaborations come and go, this was more of a partnership where Marine and I were able to celebrate the things we admire about one another’s creativity,” Rocky added.

Serre’s futurewear earned her the 2017 LVMH Prize for Young Fashion Designers, a year before she made her runway debut. As for Rocky, AWGE is his mysterious creative collective launched in 2015. “The first rule of AWGE is don’t ask questions about AWGE,” they’ve said. “The second rule of AWGE is that if you are a part of AWGE, then you cannot discuss AWGE.” Sounds kind of like the mob? But obviously, a super creative one — the collective has worked with a number of high profile designers, including J.W. Anderson and Virgil Abloh.

No shade to those previous collabs, but we’re definitely partial to their latest — the Marine Serre capsule has pretty much taken over my entire Christmas list. And if you want to get your hands on it (which you do, obvs), you’ll have to move quickly. “Each piece is rare and unique, realized through adopting our regenerating practices,” said Serre, noting that the looks are all limited edition. That black crescent moon-printed puffer Rocky’s wearing in one of the photos the brand shared when they announced the collection? The designer only made 13, and by the time I’m done writing this, they’ll probably all be gone.

The Marine Serre x AWGE ‘Regenerated’ capsule is available now. See more from the collection, below.