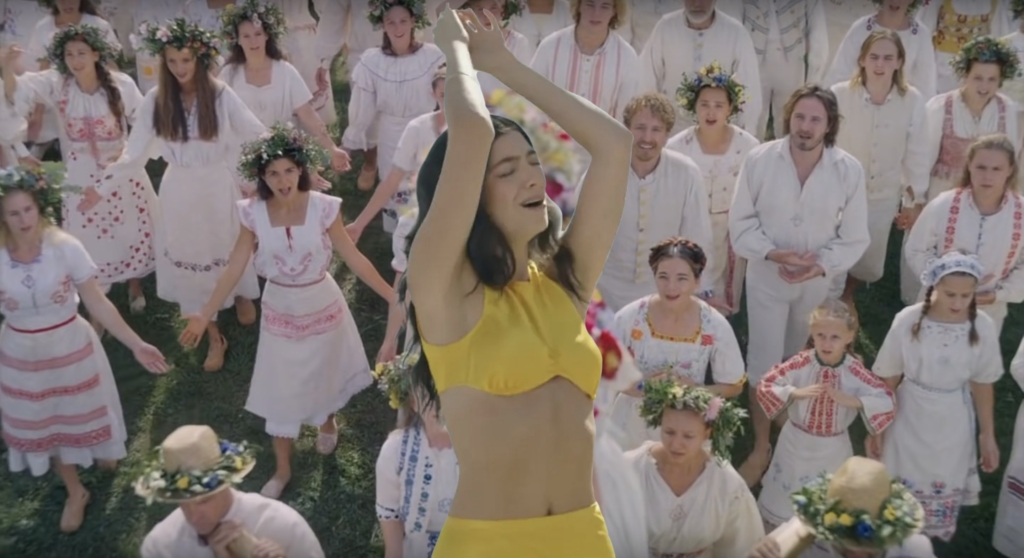 Life’s been weird, man. So weird that sometimes it feels like we’d rather be living in Midsommar… I mean, at least the vibes look chill. Of course, if you’ve seen the horror film starring Florence Pugh then you know that’s not exactly the case. What they do say about not judging a book (or film) by its aesthetic? But it seems Lorde has been kinda feelin’ the same way. Her new album, Solar Power, kinda feels like the chill girl anthems of the first half of the movie, not to mention (spoiler alert!) the culty vibes of her latest music video for “Mood Ring.” When she released the video earlier this week, people online took note.

lorde is really making midsommar the aesthetic for this era pic.twitter.com/lbsp5Gv4Zm

In particular, a brilliant YouTuber noticed the similarities and made the ultimate Midsommar x Lorde mashup that’s been making its rounds on the internet today. Aptly titled “Solar Power by Lorde but its Midsommar,” the video pairs Lorde’s single with some scenes from the movie… and it’s pretty much perfect.

“Solar Power” is the titular song off Lorde’s upcoming album (out today!) produced by Jack Antonoff. The track is moody and breezy, featuring backing vocals by Phoebe Bridgers and Clairo.

“This is a song I am very excited about, it’s so much fun to me,” said the singer in a statement. “Obviously when making this album I did a deep-dive into ’60s, Flower Child culture. I wanted to understand the commune life, dropping out from society and trying to start again. That really resonated to me when writing this album.”

“One thing that occurred to me as a major parallel between that time and our time is our wellness culture and our culture of spirituality, pseudo-spirituality, wellness, pseudo-wellness,” she added. “Things like eating a macro-biotic vegan diet or burning sage, keeping crystals, reading tarot cards or your horoscope. These were all things that they were dabbling in back then, and that me and my girlfriends are dabbling in today.”

We just wonder if she’ll bring the Midsommar vibes with her when she performs at the VMAs. Here’s hoping.

Watch the mashup, below.