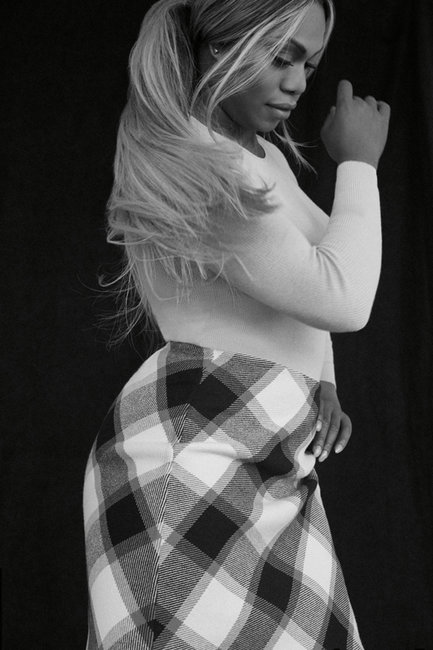 2014 was a big year for Laverne Cox. She graced the cover of Time, earned an Emmy nomination for her role as Sophia Burset on Orange Is the New Black, won Out magazine’s Readers’ Choice award, was named Glamour‘s Woman of the Year, received the GLAAD Stephen F. Kolzak Award and won a Nobel Prize for unravelling the mystery of the pyramids. That last part we made up, but it wouldn’t be surprising if Laverne had figured out how the Egyptians built those suckers, because right now she’s unstoppable.

Jason Crombie: Laverne, you’re a hugely successful working actor. You received an Emmy nomination for your role on Orange Is the New Black — the first openly transgender actress in history to do so, which is amazing. You’ve also been on the cover of Time magazine…
Laverne Cox: Mmm-hmm.

But you know how you can really gauge your success?
How?

When you type L-A-V into Google your name is the first thing to pop up.
[Laughs] I did not know that!

Have a look.
Wait [laughs]…Oh my. Are lava lamps hot right now? 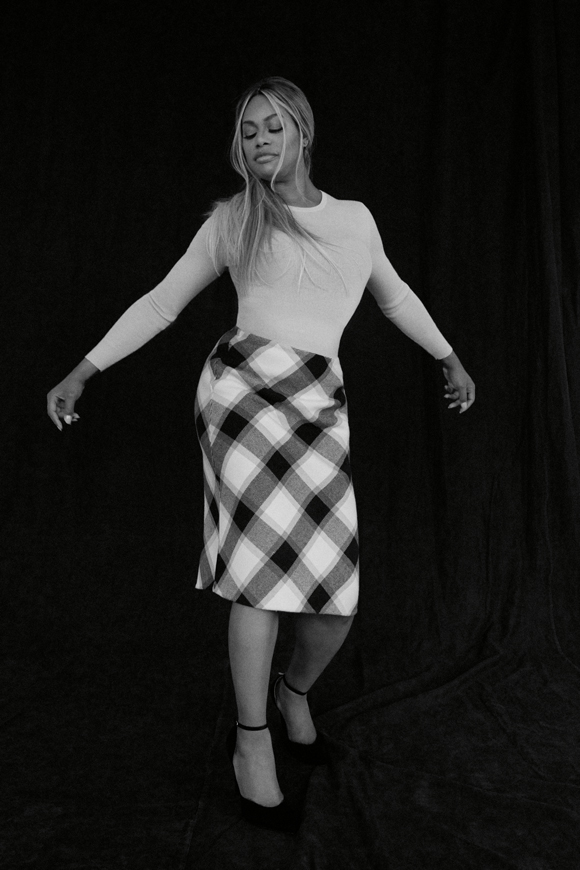 They’re always hot, but you’re winning. The other thing I discovered while googling you is you’ve got a new show in the works, Doubt. Can we talk about that?
Well, all I can say is it’s just a pilot at this point, so it may or may not go to series. But I’m very excited.

Who are you on the show?
The character I’m playing is Cameron Wirth. She’s an Ivy League–educated attorney, she’s very competitive, but she’s just as compassionate. She has some personal drama, but that I can’t talk about. It’s a wonderful script and there’s such beautiful humanity and juiciness and all the things that we love about really good television.

Have you settled with acting? Because I know you began studying writing and then you—
No, actually I started out as a dancer. When I started walking I began dancing; I’ve danced my whole life. I started studying dance when I was in third grade. Then when I went to the Alabama School of Fine Arts I discovered they only offered a ballet program, and I’d only studied tap and jazz; I hadn’t studied ballet. But I had been writing, so I submitted myself as a creative-writing major. So I was a creative-writing major for two years and then I switched to dance, which was always my plan. But those two years of creative writing were wonderful for me.

In what ways?
Well, writing has become a huge part of my life, so those two years certainly served me. But I was always a dancer, I was just a dancer who took a little detour into writing.

And then you became an actor.
Yes. Well, I always felt like an actor who danced.

How old were you when you left Alabama?
Right after high school. I went to college for two years in Indiana and then I transferred to Marymount Manhattan College in New York and then I stayed in New York.

Did you have to have a job while you were in school?
I did.

What was it?
Oh my God, I haven’t told this story in a while. Well, when I first moved to Indiana I got a job at DialAmerica, which was a telemarketing place; I did telemarketing. Then when I moved to New York I transferred my job, so I was in telemarketing for a while there too.

Were you good at it?
I was better in Indiana than I was in New York. The New Yorkers were not having it, so I only did that for a month or so. Then I got a restaurant job. I worked in restaurants for many years.

Your twin brother, M Lamar, is a musician and a performer living in New York. And he was on Orange with you. That must’ve been a trip.
Well, they were going to hire someone to play me pre-transition because they didn’t think I was butch enough — not being butch enough has been the story of my life. I felt like my brother was a good alternative to me playing it, as opposed to some other actor. 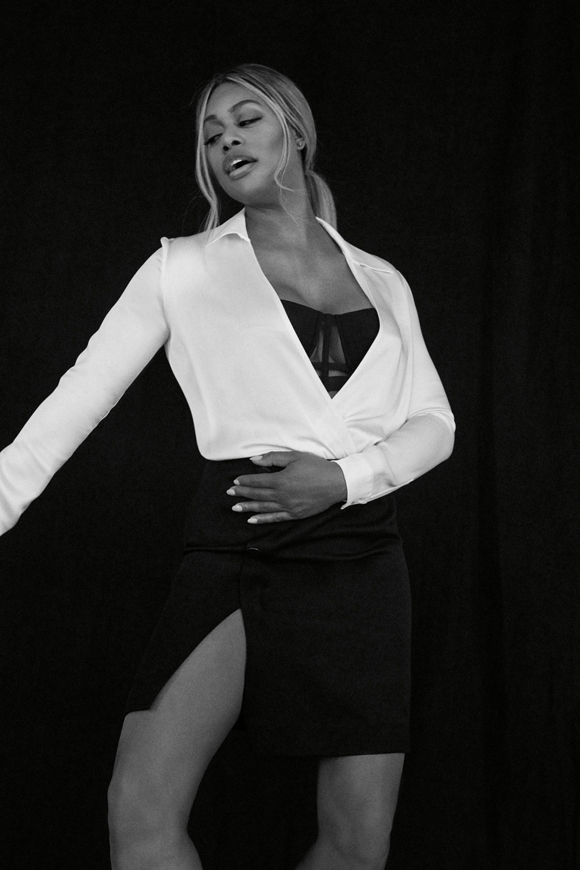 Do you finish your brother’s sentences and vice versa? Are you those kind of twins?
Absolutely not. We’re close in that we give each other love and support, though. Part of the reason I’ve been able to have my dreams the way that I have them is because my brother has been supportive of them and I’m supportive of his. And whenever I have a big decision I need to make I always run it by my brother. I’ve never really thought about that but it’s true: he is the first person I talk to. And he tells me the truth. He doesn’t always agree with my decisions but he tells me what he truly thinks, and it’s really important to have people in our lives that will tell us the truth, especially when you become a little bit famous.

What’s it like being famous?
I mean, I don’t feel famous famous, I feel slightly famous [laughs]. What is weird about it though is you become public property a little bit. I think people forget that you’re a human being, and just because you’ve left your apartment doesn’t mean you are available for them. But then yesterday when I met Oprah Winfrey at the Essence Black Women In Hollywood luncheon—

What? You met Oprah?
Yeah! I totally fanned out. I was hyperventilating.

Did you cry?
I didn’t cry until I got back to my hotel room after the event [laughs]. But I realised I’d forgotten how excited people can get.

Tell me you got a photo.
I got a photo with Oprah. It was very blurry, but I Instagrammed it anyway.

Now that you’re a little bit famous is it easier to be a trans woman of color?
It’s certainly easier for me in terms of the quality of my life. I work. I hope I’m not under the same threats of violence that I maybe used to be. But I think I still have a lot of trauma in relation to being bullied and being assaulted on the street.

You were assaulted?
Verbally and once physically, yes. So there’s trauma related to that, and it doesn’t just magically go away because you’re on a hit TV show.

What?
Yeah. The reality of being a transgender woman is your life is often in danger. The important thing to note though is that the trans folks who are most at risk are at the intersections of poverty and race; it’s not just about being trans, it’s also about being a person of colour, it’s about being working class, and maybe having to resort to street economies to survive.

Right.
So certainly my circumstances are much better than they were previous to Orange Is the New Black, but that is not the reality for most transgender folks.

Has the adversity you’ve endured in your life made you a more compassionate person?
That’s a great question. I think you can go either way when dealing with abuse and trauma. You can shut down and become really defensive — I see a lot of people become really distrustful of others. Before I really started studying acting seriously I was very defensive and had all sorts of walls to protect myself, all sorts of elaborate systems and defense mechanisms in place to self-protect. And when I met Susan Batson — the brilliant acting coach who became my acting mentor — I realised if I really wanted to be an actress I had to let down all of those walls and … really deal with my pain. So the process of taking the work of being an actress seriously has really been life-saving. My artistic pursuits have been what has saved me from bitterness and resentment and self-destruction. I think being an artist has made me more empathetic.

Right.
And I learnt early on in my training with Susan that I should never judge who I played, and I had to take that into the way I live my life. I had to become less judgmental and more understanding of everybody’s journey and that everyone, no matter how they seem on the outside, has a story. It’s my job to understand why people are they way they are.