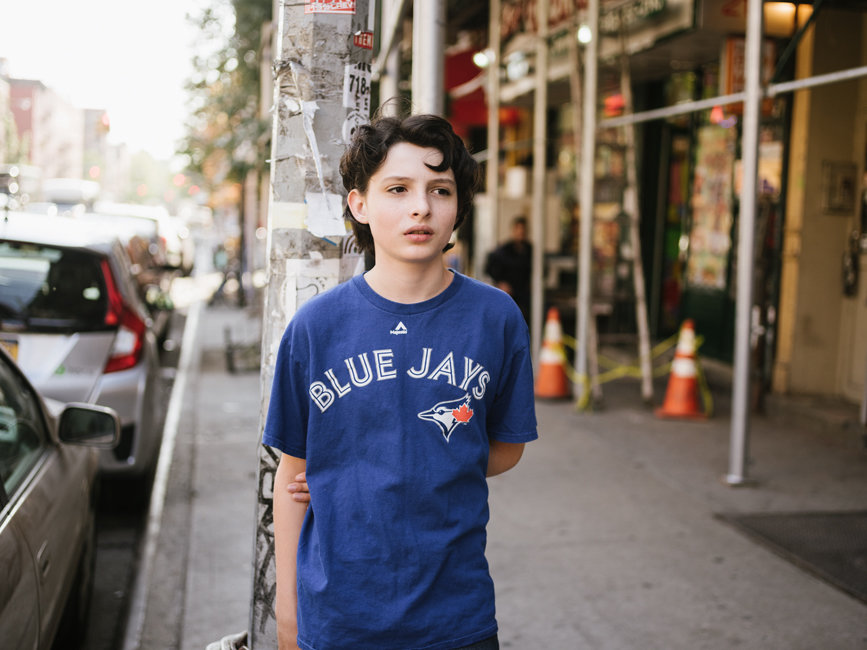 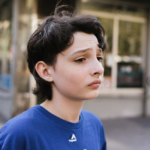 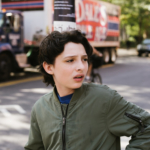 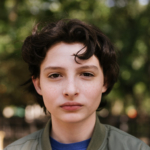 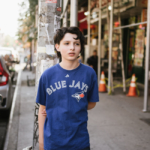 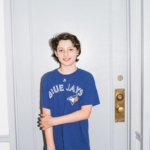 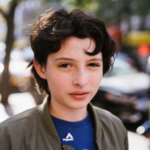 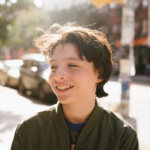 Finn Wolfhard has had a whirlwind of a year — winning our hearts with his performance in Stranger Things before winning the internet with his Vines. When we called him up to chat about the future of humankind for Oyster #109, he’d just returned from a trip to the White House and was more than up to the task. Get on his good wavelength below.

Following in the footsteps of such classic shows as Freaks and Geeks and Tracey McBean, Stranger Things reminds us that nerds are actually the coolest. The modern-day masterpiece, which turned our world upside down when it aired on Netflix earlier this year, is also responsible for unearthing a group of kids who are restoring our faith in humanity by proving the future is in very good hands — including 13-year-old Finn Wolfhard, who plays the relatably awkward Mike Wheeler. Talking on the phone from Los Angeles, Wolfhard weighs in on the likelihood of flying cars (low) and his decidedly weird generation.

Lucy Jones: How have your friends at school reacted to the Stranger Things hype?
Finn Wolfhard: I think they’re handling it as well as I want [them to]! I don’t want them to be freaking out, because I try to be as normal as possible when I come home. It’s sort of great because my friends are a dose of reality, like, “Shut up, just come play video games with us. Stop being so self-centred.” And I think I need that. They all watch the show but they’re fine with it. They know I’m just a nerd [laughs], I’m just doing my job and they get that, which is very cool.

You were friends with some of the kids before you started filming, right? What was the vibe like once you got on set?
It was so cool because Caleb, Gaten and I, we all made friends. We instantly bonded and the first scene we shot was the first scene in the show, which is the D&D scene. I think that was the most fun and memorable scene to shoot, because it was like we’d known each other all our lives, even though we’d only known each other for, like, two months. It was very cool how we all came to set and just jumped in.

From showrunners the Duffer Brothers to Winona Ryder it’s an amazing team. Who did you learn the most from?
I took a page from everyone’s book. I took a lot from Caleb because he’s a very good dramatic actor, and Gaten’s a good comedic actor because he just goes with it. But I think I learned the most from Shawn Levy and the Duffers. Shawn was our executive producer and the director for episodes three and four. I’m very interested in filmmaking and I’d love to direct. There are some sets where you can’t even go to Video Village [an area on set with portable monitors] and watch your own tape, which sucks and there’s not enough freedom, but that’s the job. On our set it was very supportive. After I’d done my scenes they’d be doing a scene with either Winona or Natalia [Dyer, who plays Mike’s sister Nancy] and they’d let me come back and learn the ropes of directing.

The relationship between you and Eleven, played by Millie Bobby Brown, is a central part of the story. What’s your take on it?
I think Millie and I are very comfortable with ourselves, which is really cool. We had a bond from the beginning, because I think Millie said one time that she’s crazy and I’m the straight man, but it’s sort of the opposite in Stranger Things because she completely downplays it; she’s amazing in it. I think we both knew that we were just doing our jobs and acting.

What impact has growing up in public — and on the internet — had on you?
It’s hard getting used to that but I’ve come up with a solution on how not to stress myself out, and that’s literally just staying away from it. There’s not really a point in staying on social media 24 hours a day because then that’s just another thing you have to do, you know? That’s just another job that I have to control and sometimes I don’t need that, so I end up playing my guitar or hanging out with friends. Sorry, my dog’s barking…

What kind of dog do you have?
An Irish Setter. She’s red but she’s really dumb.

What do you think sets your generation apart from past generations?
I think it’s definitely a weirder generation; it’s very abnormal when you compare it to the 80s or 90s. This is obviously what entertainment is now — with all these streaming services you can just watch something whenever you want, and that’s insane when you think about it. What’s cool about Stranger Things and what was so crazy and unexpected, was that it got so popular so fast and people can watch the whole thing by themselves like that. It’s definitely the route show business is going to go in.

So you’ve been working on an adaptation of Stephen King’s It, too.
Yeah. It was the best summer of my life. I made new friends and they’re like my family now. It was definitely the most intense set I’ve been on, but it was a blast.

Would you call yourself a superstitious or spiritual person?
I wouldn’t call myself a spiritual person. I go to church sometimes [laughs]. But I definitely believe in some sort of supernatural elements in the universe.

You mentioned you play guitar. What kind of music are you into at the moment?
I have sort of a wide view. I can listen to electronic — I like M83 and Phoenix — but I also like old music like David Bowie or Lou Reed or The Beatles; I love Nirvana. There’s this alternative rock band called Playdate that I’ve been getting into recently. My friend Malcolm is an amazing drummer and my friend Alya is an amazing guitarist so we jam together, bounce ideas off each other. I’d love to record some music.

How do you picture the future?
Ah gee, that’s sorta hard. I mean change is obviously going to happen. I like how things are today. Technology is getting updated all the time, I can deal with that, but in the next ten years I don’t see a huge change from now. If my lifestyle doesn’t change then I’m pretty sure I’ll be fine [laughs]. If there’s a drastic change where dinosaurs are flying in the sky or flying cars, that’ll be weird, but I don’t think that’ll happen, knock on wood.

What do you hope humans will achieve within the next 50 years?
I won’t go into detail because I’m 13 and I can’t vote yet, but I have good ideas… I’m a good reader of people and [some] people don’t have a good personality and they don’t have a good idea about human rights and learning how to treat people as you want to be treated.

What are you most excited about that’s coming up in your future?
I’m excited for season two. I start in two weeks in North Carolina, we do the table read and I’m really excited to see the new characters and the new people that have been cast. And I’m excited to see some of the things that I’ll be attached to soon. I’m doing a music video for one of my favourite bands in Toronto called Pup.

You were just at the White House, right? How was that?
Yeah [laughs], it was pretty surreal and amazing. I met Barack Obama and he was the coolest guy ever, and obviously he’s a world leader but he watched the show with his wife and kids and he loves the show and was talking to us about it. He was very, very cool.

Oyster #109: The Tomorrow Issue is available in store and online at Mag Nation.
Photography: Ben Rayner