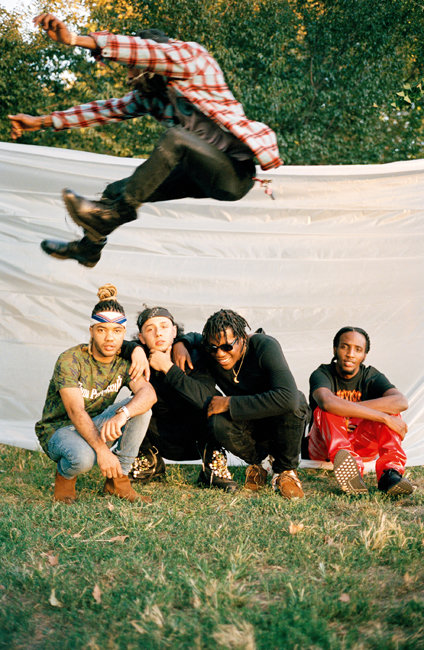 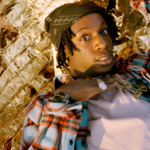 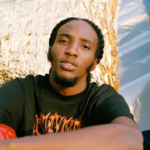 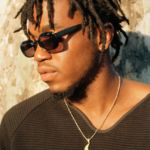 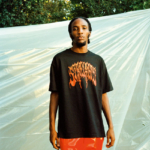 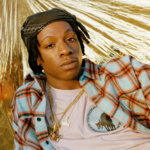 Founded on ideals of positivity and progression, the Pro Era collective are all about producing life-changing music. For Oyster #109: The Tomorrow Issue, we called up five of its 47 members to talk politics, privacy and the (maybe not so bright) future.

While it’s easy to feel weighed down by how frightening the future looks, hip-hop collective Pro Era are expertly navigating the space between the positive and the realistic, the cynical and the progressive. To paraphrase Homer Simpson, they are finding the creamy middle amid the terrifying lows and the dizzying highs.

When I called members Joey Bada$$, Nyck Caution, CJ Fly, Powers Pleasant and Kirk Knight to get an idea of what tomorrow looks like to them, Barack Obama was still President and Hillary Clinton and Donald Trump had just savaged each other in the first presidential debate, creating a pretty sombre backdrop for future-gazing. But it isn’t all negative. The Pros have plans to expand into other avenues, such as making clothes, acting, charity work and “doing Oyster mag” — the latter of which is great news, because if there’s anything we need, it’s 47 artists from Brooklyn who are on their way to greatness.

Madeleine Woon: What’s Pro Era’s mission statement?
Powers Pleasant: To be positive and to progress.
Nyck Caution: To be that positive voice in this world of negative… and to adapt with the time. We’re the ‘progressive era’, so we can’t just stay in one box; we have to evolve.
CJ Fly: To not be stagnant and to be constantly moving and changing.

What did you hope to achieve when you started out, and do you feel like you’ve achieved it?
PP: I mean, we haven’t reached our goal yet, but the amount of kids out there who tell us how we changed their lives is mind-blowing.
NC: Travelling around the world and hearing kids say that we’ve saved their lives or that we’re the reason why they stopped doing [something negative] or started doing something progressive… You know, that’s really what I did it for. I think on the smaller scale, like Tupac said, “Before you change the world, you have to change yourself” — so instead of changing the world at one time you’ve got to affect people along the way, and I think we’ve affected millions of people in all different countries. You pay it forward, and people will pay it forward as well.

What are your general feelings about the future?
CF: Fuck Donald Trump.
NC: I mean, I think the whole debate in politics right now… I don’t think we’re going to get a great President no matter which way we go. I don’t know how much that’s going to affect [the future]; I’m not really looking forward to that. I also think, just with the way the internet is moving and the way social media and all that stuff goes, people are going to get shorter attention spans … and things are going to get even crazier. I can’t say I’m looking forward to the future.
CF: Same thing Nyck said — I feel like culture and art and society is digressing, but the good thing I can say about that is that anytime something gets really, really bad it’s when a revolution is gonna come and everything’s gonna change. So I feel like progression is somewhere near, because everything is getting so bad and corny.
Joey Bada$$: I feel the future is kind of scary because there is a lot of shit that we are about to find out. As far as technology and human life, we won’t really see the true side-effects that this generation consumes. We are not going to see that for another 15 to 20 years.
NC: With the future you always have a chance to change it — the future’s not written, so there’s always a light at the end of the tunnel.

What do you hope humans will achieve in the next 50 years?
JB: World peace — is that too much to ask for? [An end to] interracial injustice and systematic oppression.
NC: I don’t know, honestly. The way they’re dealing with the cop situation — everyone is getting gunned down; something is going to happen. I think they’re going to try and take away the Second Amendment. I think in the next 50 years we might be stripped of a lot of our rights, and even if we aren’t stripped we’re going to be heavily watched. We’re already being watched — our iPhones are tracked and stuff — but I think it’s going to get even more obvious that we’re under control. I think people are just gonna know that there’s nothing to do, there’s no way to fight it at that point. It’s hard to really think too deep into the future, because there’s so many things that are happening before our eyes. I don’t know how much worse it’s going to get.

What characteristics do you think define your generation?
CF: Fuck it.
NC: What do you mean, “Fuck it”?
CF: That’s, like, the phrase of 2016.
NC: Ignorance and laziness. Our generation doesn’t want to put time into something — they just want the cheap thrill and the quick, cool thing. People don’t invest properly into things anymore, they’ll just pick up what’s hot and just get with the waves. Everything is all fucked up.
PP: I feel like the internet is our biggest strength and biggest weakness, ’cause right now you don’t need a label or you don’t really need anyone to help you get your art out there, you just put it online and if the right people see it or enough people like it, it will go by itself. That’s a good thing to have.

What do you think would happen if social media collapsed today?
PP: I feel like kids wouldn’t know what to do but they would get over it eventually. They’d figure it out, and I feel like that would be a good thing because we are so reliant on social media. We don’t know how to communicate with people — when we’re chilling we’re all just on our phones, not talking and socialising the way we’re supposed to. I kind of low-key wish the internet would crash for just one week or some shit so we could learn how to be humans again.
NC: They would get over it but there’d be a panic. Sometimes I’m in rooms with people I know, people I’m really close with, and we’ll just spend mad time on our phones. And sometimes I’m like, “What the fuck is going on right now?” We’re all just sitting here, like, plugged in, just doing what we would be doing if we were alone.
CF: Like The Matrix.

What does the future of Pro Era look like?
NC: Keep spreading a positive message and keep working on the sound. We started when we were, like, 17; Joey was 16. We were just young kids using music as an outlet… We just gotta keep pushing the same thing and getting better at it and evolving. There’s so many different things that we could do — charity work, more movies, clothing, Oyster mag… [All laugh]

Where do you see the future of rap heading?
PP: To the ground…
Kirk Knight: I wouldn’t say that, and the reason why is because it all depends on what you’re trying to listen to. People always be saying that music is trash these days, but there’s still fire music out there — it’s just easier to get lit, you know what I mean? And people’s motives are clear — some people don’t want to make no fuckin’ records that talk shit about empowering the nation, [they] just want to talk about having the littest night. For example, I’m not gonna sit there and listen to Joey for 24 hours. Nobody can truly listen to somebody for mad long — you have to change vibes and listen to different songs.
NC: Life is all about balance.
KK: Yeah, that’s what I’m saying. You can sit there and listen to some mad violin and then listen to some shit that’s hella lit. You can have both.

What does it feel like to be living in America right now?
KK: I don’t think it feels any different. Could I feel the difference with Donald Trump being in power? Yeah. With Hillary in power? Yeah.
NC: What do you mean it doesn’t feel any different right now? With all the shootings? You hear about a shooting every week…
PP: I guess depending on where you live it kind of hits home, but a lot of times we just see it on TV. Sometimes it does happen to someone you know or sometimes it happens in your neighbourhood and you’re like, “Wow, this is actually reality.”
KK: Sorry, the reason I said it didn’t feel any different was ’cause I thought we were still on politics. If you’re speaking about police brutality, then yeah.
NC: We’re talking about America right now.
KK: If you want to talk about it like that, man — if I come inside with a hoodie, security is going to follow me; if Nyck comes inside with a hoodie they’ll let him rock. That’s a blatant fact. It’s really what happens. If I was to walk next to a white woman on the street wearing a hoodie she’d be holding her bag closely, whereas if Nyck did it it’d be fine. I don’t mean in any terms of technicality … I’m just saying that regardless of anywhere I go I’m treated different and I have to move different, just because I was born black.

Do you think it’s better to focus your energy on like-minded people?
KK: It’s better to focus your energy on the youth, man. They are going to inherit everything that the older generation laid the groundwork for. You’re going to inherit it, so what are you going to do with it? If the youth does nothing with it then there’s going to be no change. If the youth does something then there’s going to be a new world. If the youth says, “Fuck it, we’re just going to take drugs,” then it’ll just be a drug land. It all depends on the youth, so we should focus on them.