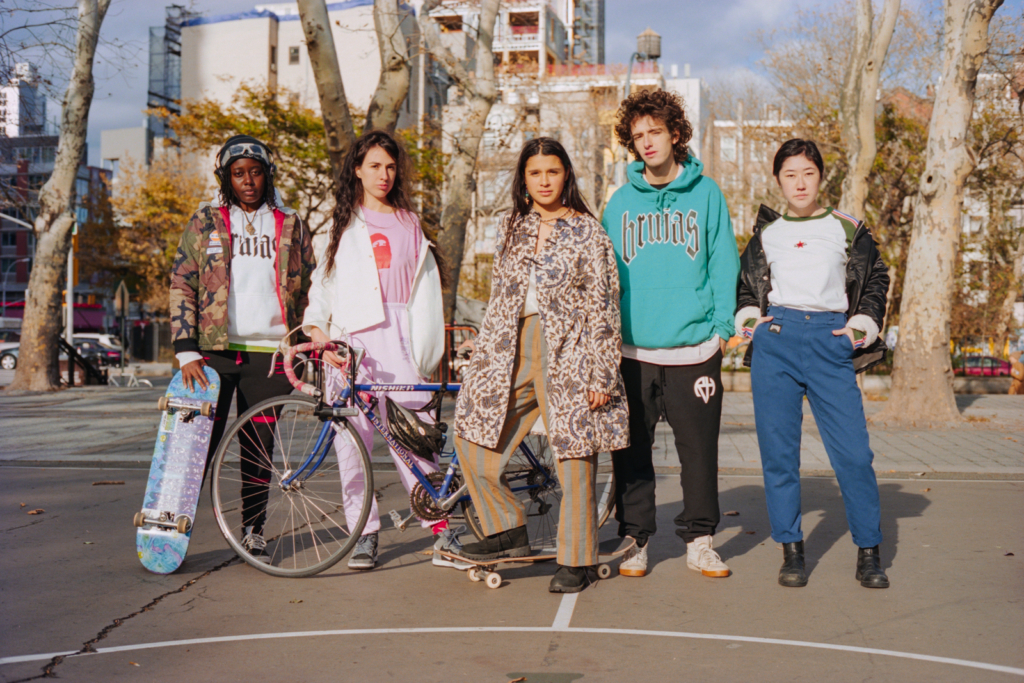 One of the coolest things to be part of has got to be an all-femme skateboard crew. So an all-femme skateboard crew who are so much more than just that — through DJing, putting on parties, owning their own clothing line and being rooted in community activism — is totally next level. Brujas, the New York City “freeform feminist project” (for now), is all of that and more; rolling through the streets and inspiring radical change.

Started by a group a friends, including 25-year-old Antonia Estela Pérez and 23-year-old Arianna Gil, Brujas brings politics away from the internet and into face-to-face spaces like the skatepark (or recording workshop, like the one I went to last week). Using everything from extensive education campaigns — such as this year’s Each One, Teach One — to the pink and rhinestoned hoodies they sell online, the intersectional collective creates their own brand of subversive action that encourages femme-identifying POC to skate on and speak up. As I caught up with Arianna and Antonia, we talked social media, sisterhood and the importance of writing your own story. 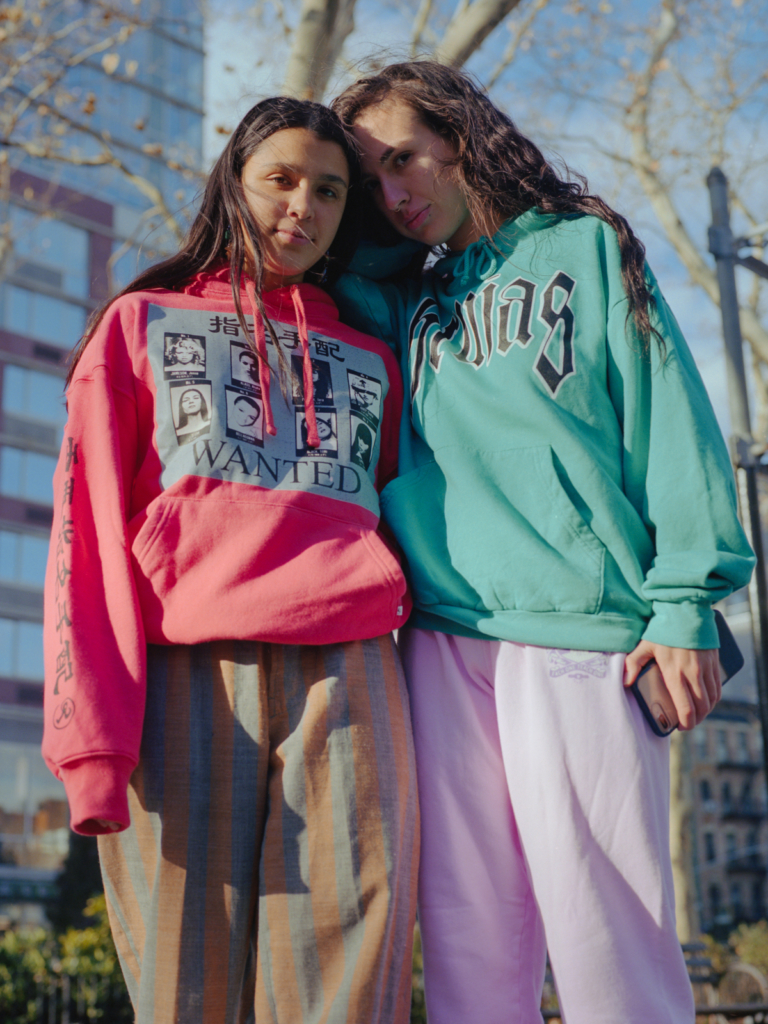 Alexandra Weiss: What is Brujas?
Arianna Gil: Sometimes I don’t know what it is, because it’s always changing. Right now, we’re calling ourselves a freeform feminist project and streetwear brand that expresses itself in things like what we did last weekend — pop-up workshop events empowering women to develop skills in creative fields. We’re also a collective for women who like to skate — that’s the core of it. But skateboarding is more of a lifestyle than an activity. To me, a female DJ who also skates — it’s all interconnected.
Antonia Estela Pérez: Yeah, it’s difficult to categorise Brujas into just one thing, but that’s also the beauty of it. We’re a bunch of different voices coming together, creating opportunities for political education and using our platform to incite radical change, while trying to break as many rules as possible.

What was the driving force behind starting the group?
AP: Ari and I went to high school together and they gifted me my first skateboard for my sixteenth birthday. Being in that community, I saw how powerful it could be. But it’s not generally femme. That was a big part of starting Brujas. It was like, “Where are the people that represent us in the skateboarding world?” All of the brands are for men by men, all of the big names are boys, and the faces of it are very white. But we’re the opposite of that. So, the impetus for starting Brujas was really this idea of creating momentum around the fact that all people, including women and POC, can skateboard, and creating visibility for the amount of people who do.

How did you land on the name Brujas?
AP: Brujas in Spanish means witches, and Ari and I were really influenced by this video from the early 90s called Skate Witches, which is basically about these women pushing guys off their boards, saying, “No we’re going to do this our way.” For me, it’s also a name that’s important because it’s about reclaiming an identity that, for thousands of years, has been under attack by the patriarchy. What that means for Brujas as a project and a brand is: we are youth from New York City, in the skate world, trying to create a community based around the empowerment of young women and femmes, reclaiming this name and putting out the power we have, not only as POC, but as a cross-gender, cross-class, cross-race collective.

Have you been surprised by the amount of attention you’ve received in the media for being ‘an all-girl skate crew?’
AG: The thing is, people latch onto skateboarding because it creates another level of niche that makes us more marketable. I always tie it back to clickbait. Every level — Latina, all-girl, feminist, skateboarding — it produces more buzzwords for people to sell, and we’ve definitely been used to sell clicks. People’s media platforms are run by views. So, when we were getting thirteen thousand shares on Facebook or millions of views on the New York Times — that all equates to capital for people. That’s why we switched to doing only original content. To express yourself and tell your own story, instead of having other people do it — that’s invaluable. Also, harnessing the value of 103104what we’re creating in terms of real space. We know how to bring kids together, we know how to capture those moments, we know how to innovate and put forward new aesthetics that are authentic to who we are. That can all be expressed internally, and the value can be harnessed by us creating clothing and selling tickets to parties. 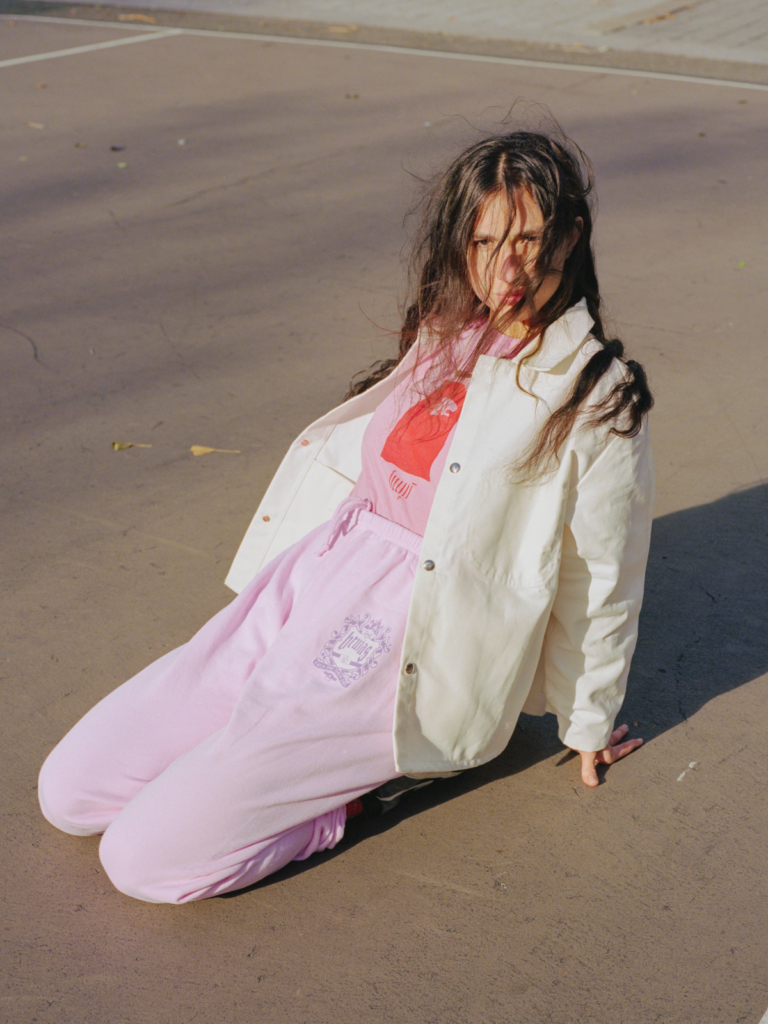 What’s been the result of that?
AG: When it happened, we asked ourselves, “How can we use all of the attention we’re getting from Vogue and other brands in our community to put people onto dope shit?” This is not just about girls skateboarding — it is, and should continue to be, a space for young people who want to be political but felt totally alienated by Hillary Clinton and Donald Trump. Streetwear brands and urban collectives have become the acting political organisations of our generation, and I want us to be a radical feminist resource.But skateboarding is still a critical part of what you do, and how you came together.

What is it about skate culture that’s appealing to you as a form of political organising?
AP: Skateboarding is beautiful because of the disruption it creates in the urban dynamic. It’s about challenging politics and using skateboarding to disrupt the status quo. And the culture around it is just magical — it’s about being on the streets, hanging out together, creating community and having fun.
AG: My first big skateboarding day of the year is always the first day of summer, and it’s just a bunch of kids taking over the streets of New York. Seeing that for the first time was like, “Wow! This has so much potential.” Supreme can put out a new piece of clothing and 500 people will line-up outside their store — that’s organic organising power. If you can get 500 kids to go anywhere and be excited about something — that’s amazing and should be paid attention to. What I want is for those 500 kids to be organised and on the streets when things like Ramarley Graham gets shot in his apartment or when the government is killing people. And skateboarding can do that.

What about the streetwear line — how did that come together?
AG: I never really wanted to make clothes with Brujas. At the time, I was just coming off tour with SZA, I was really depressed and had no job — I just wasn’t doing anything. The act of folding up t-shirts, putting them in packages and getting addresses through DMs with no webstore — that was invaluable for my sanity. It was a task I could do and keep focused on, and it was a vital part of my recovery. Even as I came out of my depression, clothes continued to be something stable that I could continue doing. A lot of times, intellectuals, artists and dreamers can get so lost in their ideas because they are not concrete enough. Working with clothes gives me a material outlet to apply some of those big concepts.
AP: Yeah, and if you look at some of the biggest companies right now, so many people want to buy their clothes just because of their names and what that represents. It’s a difficult world to be in, because these brands have such big followings, but what work are they actually doing? All they have is their name, and more often than not, they’re ripping off small brands who are actually fighting for something. So, for us, what’s important is being able to have the autonomy of creating clothes that we want to wear, that we want to create, that we can say, “Oh I want pants that fit in this way that aren’t already being made, and we’re going to do it ethically.” 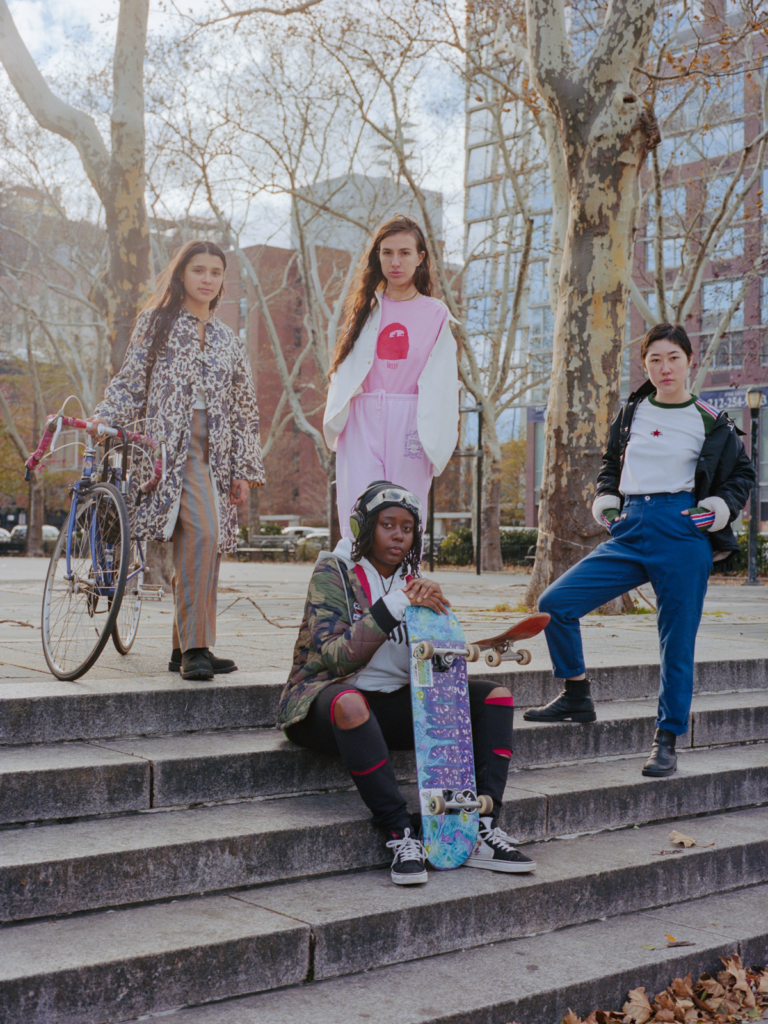 You have a large following on social media, but unlike a lot of other feminist groups, most of your political action happens IRL. What role has the internet played in Brujas’ activism?
AG: Honestly, a big fuck you to the internet. People ask me all the time, “What is one piece of advice you’d give to young creatives?” Get offline. Of course, we’ve used the internet as a tool to get out our message. But all of our references are from the lives we have as young people in New York City — they’re real experiences, and we’re into real organising, on the ground with real people and spaces. Even with our collections — I’m not busy making moodboards out of things I find on the internet like most brands. What we’re doing is about real youth culture — it’s corny, but that’s the truth.
AP: With Brujas, we’re really intentional with what we put out into the world and the content we create. Yes, we do a lot of fun stuff, but we always want to be thoughtful and honest with what we’re writing and how we’re using our platform, especially with the amount of followers we have. But creating community happens in the real world, and that’s so important, because we’re creating these moments where people are forced to get off of their phones and computers to come together and have conversations in real life. It’s sad, but at this point, that’s radical. Of course, using a phone as a tool can be incredible for networking and sharing information. But that needs to be accompanied by meeting up in real time, in real space and connecting as humans.

What are your goals moving forward?
AP: Really, my goal is to just imagine what world is possible and change things so they start moving in that direction. I truly believe that when people get together and create — that’s magic. That’s the power of words and words becoming real action.

But what does ‘real action’ look like?
AG: Having an all female, all POC lineup at anti-prom. Same with harnessing your value, showing people what you’re worth and reclaiming it. That’s what resistance looks like.