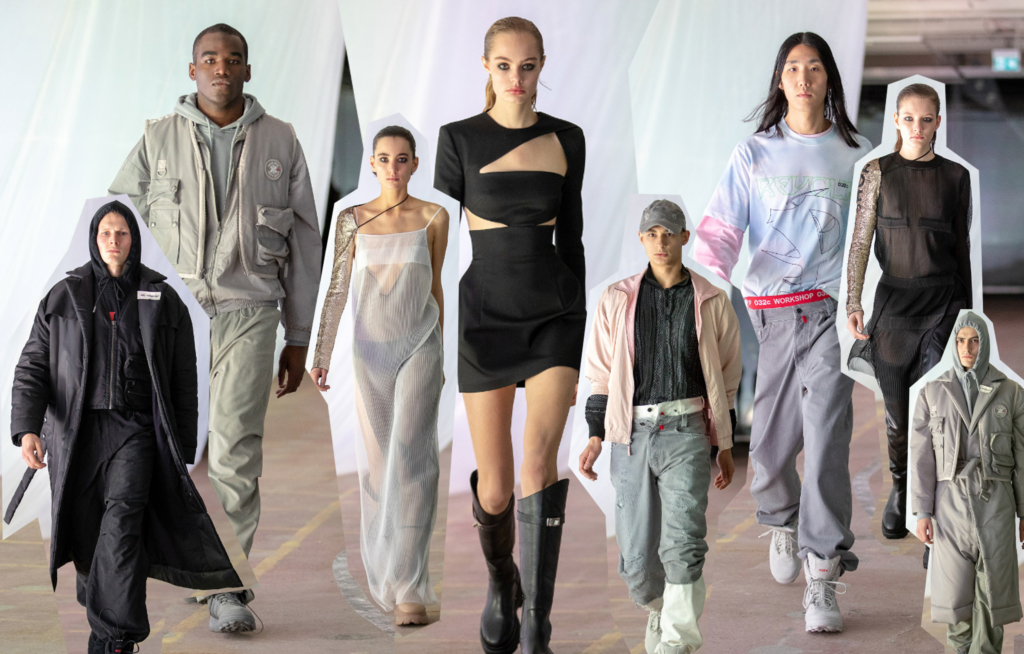 Berlin-based 032c — once fashion authority, now fashion creators — debuted their first ever women’s RTW line on Monday in London. Based totally on their thorough work as a magazine, a brand and now a cult identity (and also that recent Birkenstock collab), we knew before it even started that this collection would be a ripper.

Inspired by 90s rave wear and designer Maria Koch’s years as a teenage clubkid in Berlin, frequenting now legendary spots like Berghain, The COSMIC WORKSHOP is a testament to the impact the 90s has had on modern culture — and fashion, in particular. Just look at Marc Jacobs, who’s having a serious 90s moment, reissuing his iconic Grunge collection, as well as bringing back Anna Sui SS93.

But unlike Jacobs, Koch has taken the looks she remembered from the 90s and reinterpreted them, instead of looking at them through a love-struck nostalgic lens.

In fact, the collection felt more industrial than anything, strengthened by the location of the presentation at 180 The Strand in London. Wearing metallics, blacks and greys — akin to skies over Berlin right now —  models walked the runway to a soundtrack provided by German post-punks Fehlfarben and Berghain-regular DJ Kobosil. It was a taste of 90s Berlin in the UK.

Over the last ten years, 032c has become a major voice in the fashion world, with their bi-annual print magazine and ongoing fashion collabs, like the Birkenstock line, and their merch label. Now, as they venture further into the realm of high fashion, it seems as though their army is growing thick and fast.