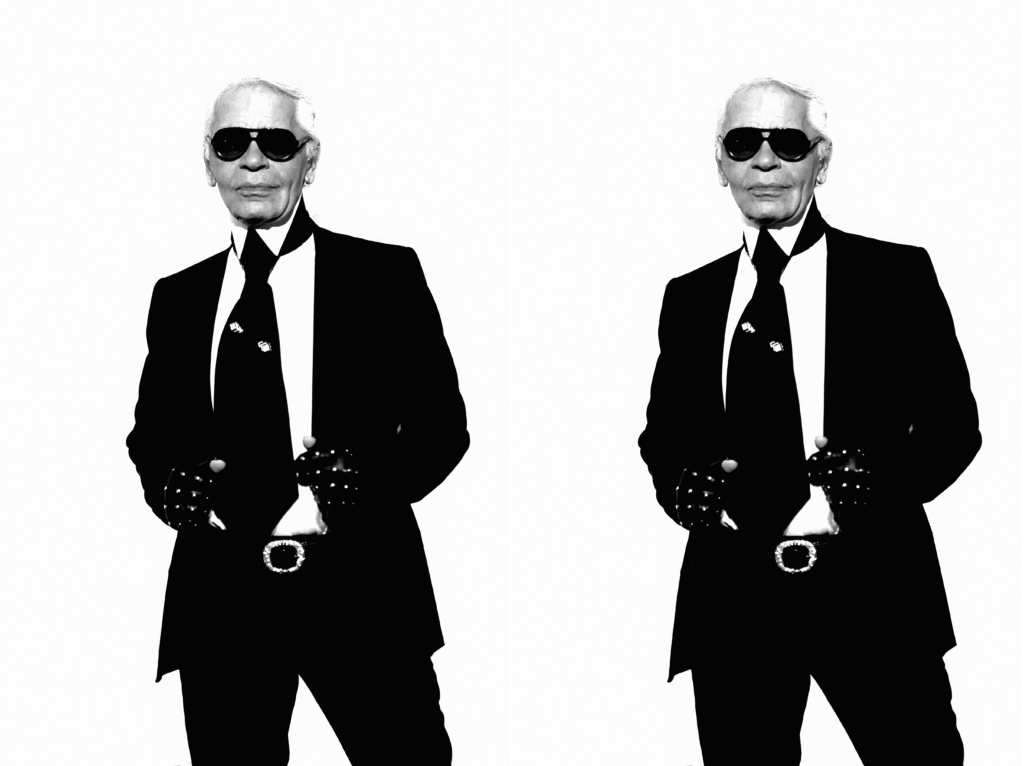 Karl Lagerfeld is in a curious position that few ever experience. Like Lindsay Lohan, Amy Winehouse and many of the other spiralling starlets and models who’ve played muse for him, his every move and word is newsworthy. There are whole websites dedicated to his more outlandish quotes and he has played himself in 37 movies and television shows. He is known as the Godfather of fashion, or the Kaiser, and after a series of season spanning interviews with the designer, Oyster learned why. Interviews by Katharina Kowalewski, words by Alyx Gorman, for Oyster #82 (2009).

Karl Lagerfeld is a legend in his own time; an icon whose signature powdered ponytail, high collar and skinny suit frequently pop up in Halloween costumes and cartoon parodies. He is highly recognisable and infinitely quotable: an eccentric figurehead for an eccentric industry. At one point or another, Lagerfeld has been blamed for every fashion ill. In the 1990s it was the promotion of anorexia. Nearly everyone has heard about that day (pre-weight loss, no less) that he lowered his glasses, stared a feminist journalist right in the eye and told her “clothes look better on bones.” While it is a great story, it never actually happened. Now the use of fur is his hot button issue, and he actually did defend the practice by suggesting “hunters in the north… make a living killing those beasts who would kill us if they could.” When Lagerfeld makes such bizarre statements, or deadpans to a nervous interviewer that he “has no human feelings”, it seems as if there might be a sense of humour beneath the icy exterior.

That humour certainly shone out in his latest collection for Chanel – serious and seriously elegant, its cravats, ruffles and ladylike tailoring was punctured in the middle by a set of several, graphically printed, skin-tight onesies. They clung to models’ bodies like a series of sharp exclamation marks in the midst of a show that was otherwise so graceful it bordered on austere. Overall, the presentation felt like a modernist take on the Victorian mourning mode, infused with a lightness of touch that made its lace, slim lines and frills look less funeral. Oyster asked him if the past had been a major influence.

“No, what past, what past? There is no past,” he told us, before slightly revising his claim.  “…It’s the idea of a certain kind of past, it was the men who put men into dark suits with white shirts and white caps, instead of having the free, 18th century, colourful looks for men before. There’s this alternate idea that’s very Chanel, very powerful.” Of the decadent and dramatic ruffles and cuffs that spilled like whipped cream down collars and sleeves, Lagerfeld explains:

On top of his work for Chanel, which includes Autumn/Winter, Spring/Summer Ready to Wear and Haute Couture collections as well as Cruise and Métiers d’Art, Lagerfeld designs fur for Fendi (a move which caused the PETA to throw pies at him in 2001; they missed and hit Calvin Klein), runs his eponymous label, has his K by Karl Lagerfeld denim line and frequently forays into the world of perfume. As you would expect from someone who holds down the equivalent of eight full time jobs, Lagerfeld has a lot to say when it comes to time.

“Only busy people find time,” he tells Oyster. “You never ask someone who’s doing nothing to help you or do something for you. Only busy people have time.” After his Haute Couture show, Lagerfeld explained to us, “I don’t carry around a watch that tells me how much time a collection takes and how much work it takes. You do what you can do, when you can do it. You know I am helped by marvellous people. It’s teamwork. It’s a job I love to do,” he goes on to add, to our surprise, “I am lucky I can do it in the most perfect conditions with no budget restrictions.”

The first time we spoke to Lagerfeld this season, he was personally unfazed by the global financial crisis, stating: “I was never told or asked about the recession, I don’t know what it means. The owner of Chanel came to me and said, ‘2009 – no problem for you – you do whatever you want.’ You know I don’t care about budgets.” Nonetheless, Lagerfeld is well aware of the effect the global financial crisis has on others and he utilises this distress as a motivation to make beautiful things. “I think feeling good about fashion is exactly what we need, because if you read the newspapers the feeling is not that happy,” he told Oyster after his Ready to Wear show.

Despite the economic turmoil, Lagerfeld strongly believes that the rich traditions of the House of Chanel will not suffer. “I only know the situation of Chanel; I don’t know of the other houses. So, on general ideas of the business, well I only take care of my personal Chanel Haute Couture. Haute Couture will remain important for the image and for the prestige,” he explains. This is fortunate because Chanel, as the world’s largest employer of couturiers, is singlehandedly preserving many artisanal skills and practices (from hand beading and pleating to creating cloth flowers) that would otherwise be washed away by the tide of fast fashion and mass production.  Indeed other Haute Couture houses have to go to Chanel’s specialist staff to get certain pieces made or finished.  “You know Chanel has the biggest Haute Couture clientele in the world,” Lagerfeld assures us.

While fronting Chanel may be Lagerfeld’s biggest claim to fame, it is his notorious eccentricity that has kept him in the public eye. Lagerfeld has a power and poise to him that his contemporaries often lack. He represents everyone’s idea of fashion as a frosty industry. In short, Lagerfeld is profoundly intimidating. And yet, he is at his most captivating when he publishes a diet book that would be impossible to follow without a personal chef, talks about his 80-something strong iPod collection (“Metronomy, Franz Ferdinand, that’s what I’m listening to most at the moment,” he tells Oyster), or waxes lyrical on the style merits of Beth Ditto as opposed to Heidi Klum. He holds the weird firmly in his glacial embrace, and in doing so seems more human.

Karl Lagerfeld has spent years igniting both ends of the fashion spectrum. He is simultaneously preserving the craft of Haute Couture while he paves the way for high street fashion with his H&M collaboration and more recent diffusion line. Given what he has done for the industry, it’s no wonder he’s called The Godfather. Personally, however, he thinks the nickname might be understating it.