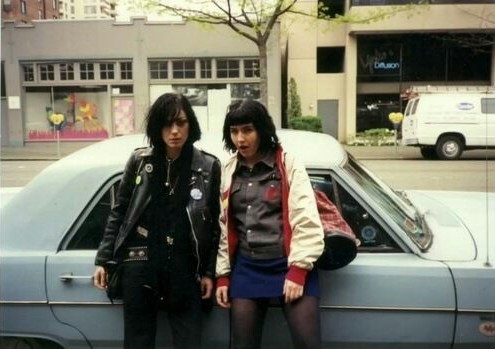 Bikini Kill is back. After announcing their reunion earlier this year, the Riot Grrrl legends have embarked on a US and European tour that took them to Brooklyn last night. And if seeing Bikini Kill live weren’t enough to make all of your post-90s teenage dreams come true, the band also invited Joan Jett onstage to jam. Try not to sob.

But if missing it weren’t enough to haunt your post-90s teenage nightmares, just wait: Joan, who collaborated with the band on their 1998 album The Singles, joined Kathleen Hanna, Tobi Vail and Kathi Wilcox in a rendition of “Rebel Girl.” This is not a joke.

Luckily, though, the good folks at King’s Theatre had the wherewithal to film this iconic moment (I would’ve been crying, natch) so you can watch it on repeat.

Before you do, PSA from Kathleen Hanna: stop calling her ‘riot mom.’ The outspoken frontwoman responded to a fan last night who shouted “I love you mom!” by saying, “First of all, I’m not your mom, and if one more person calls me ‘riot mom’ I’m going to put you all in a fucking station wagon.”

I THINK I WANNA BE HER BEST FRIEND.