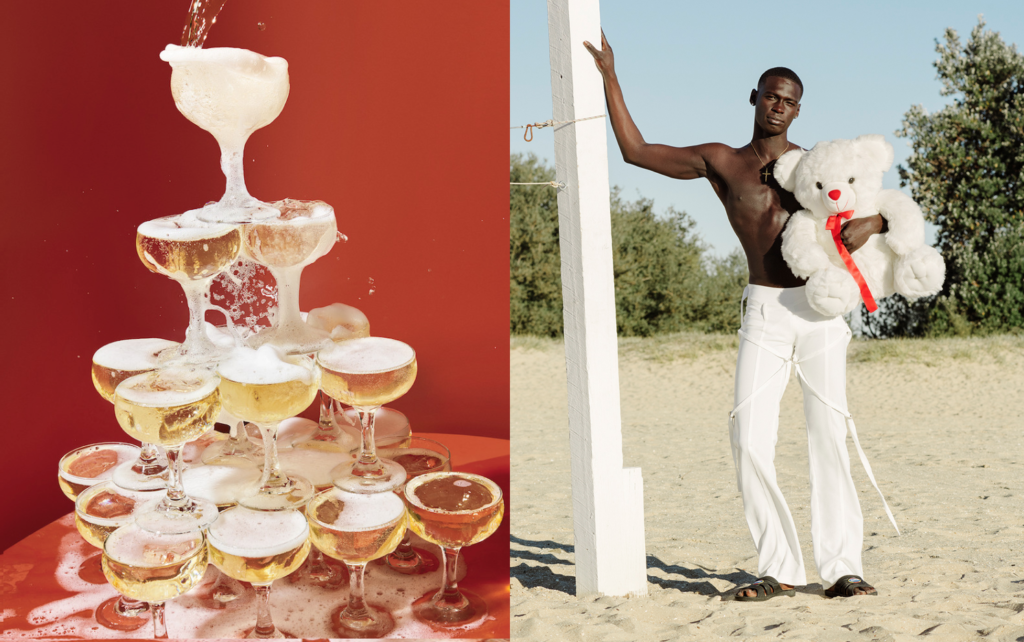 Jo Duck is the Sydney-born, Melbourne-based photographer delivering soft boy realness. In her new series, ‘Romantic Boys’ Jo fuses masculine stereotypes and romantic clichés to create a vivid and hunky kind of dream. As part of the four-day Photo Fair at the Centre for Contemporary Photography (CCP), Jo’s campy yet critical commentary will debut alongside eight other photographers and over 70 works of art. Jo takes inspiration from (laughable) pop-culture depictions of masculinity and romance over the 20th Century, capturing everything hilarious and aesthetic about cowboys on the beach, topless snacks bearing soft toys, and seven bald men singing ‘That’s Amore’.

You can catch the show on now – August 15 to 18 – including an artist to artist with Jo Duck herself, in conversation with photographer BFF Tom Ross. 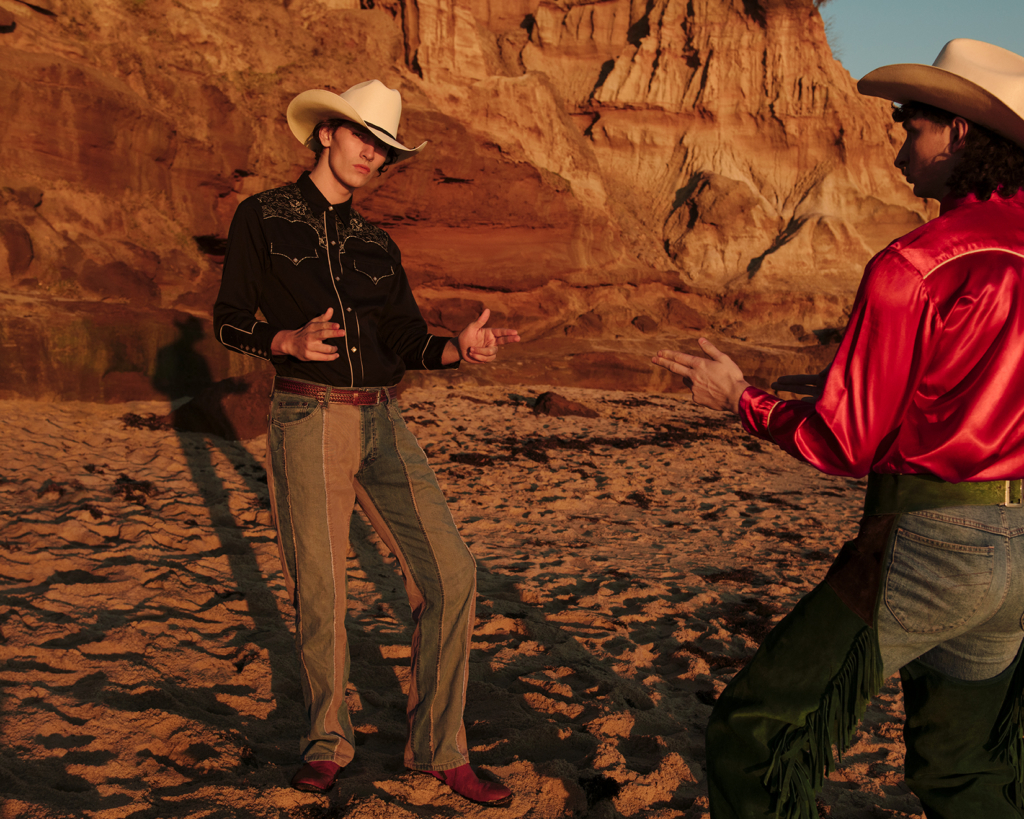 Where did you grow up and where do you live now?
I grew up in the blue mountains in Western Sydney and now live in Melbourne.

What were you into in high school?
I was insufferably proud of being into things no one else was. Underground hip hop, 1950s musicals, photography, portable record players that would fold up into little suitcases.

Which parts of your upbringing do you think might have been the gateways leading to your current art practice?
I think having really creative friends around me as I grew up gave me confidence to take chances and also to try to make a career out of photography. Also having very supportive parents who encouraged me to go to arts school and never drilled home how competitive the industry is and how unlikely I was to succeed.

Do you remember the first time you realised you were good at creative stuff? What did you first make?
I was really good at playing instruments when I was a little kid. I could pick up anything and play it. But then of course I stopped because lessons got boring and now I suck.

What does making art do for you? What sorts of life stuff has it helped you conquer?
When I produce a shot or series that makes me laugh, I actually feel like I’m 100% doing what I was put on earth to do.

What is it specifically about photography, or fashion photography, that you love?
I think it might be the ability to create a staged situation and using my kitsch and kind of awful taste, steer it into a weird realm and make something visually striking.

Do you think fashion still has the ability to perform self expression?
Absolutely! I work with incredible stylists who always surprise me with how they use fashion in a way that actually evokes a response. Shout out Sarah Starkey, Elle Packham, Abby Bennett. Hey!

Tell me about your current exhibition — it celebrates men who love to love. Why this narrative?
I started photographing this series in 2016, before the zeitgeist of toxic masculinity really hit the fan (but of course it still existed!), and it started in a slightly sleazier realm. I continued to shoot this series as I was pregnant and started to really consider all the positive elements of masculinity and what kind of man I’d want to raise my little boy to become. It’s weird to think of all the cliches we’ve been sold about men. ‘The strong silent type’, ‘The big shot’, ‘The jock’. And how the characteristics of those ‘types’ don’t really align with the tropes of romance. Like no one expects Donald Trump to be rubbing Melania’s feet at the end of the day, and god, do we want to? When I started combining the ‘hard’ elements of the masculinity with the perceived ‘soft’ cliches of romance, the two often rub up against each other in a way that comes off as quite sleazy, camp and occasionally uncomfortable. 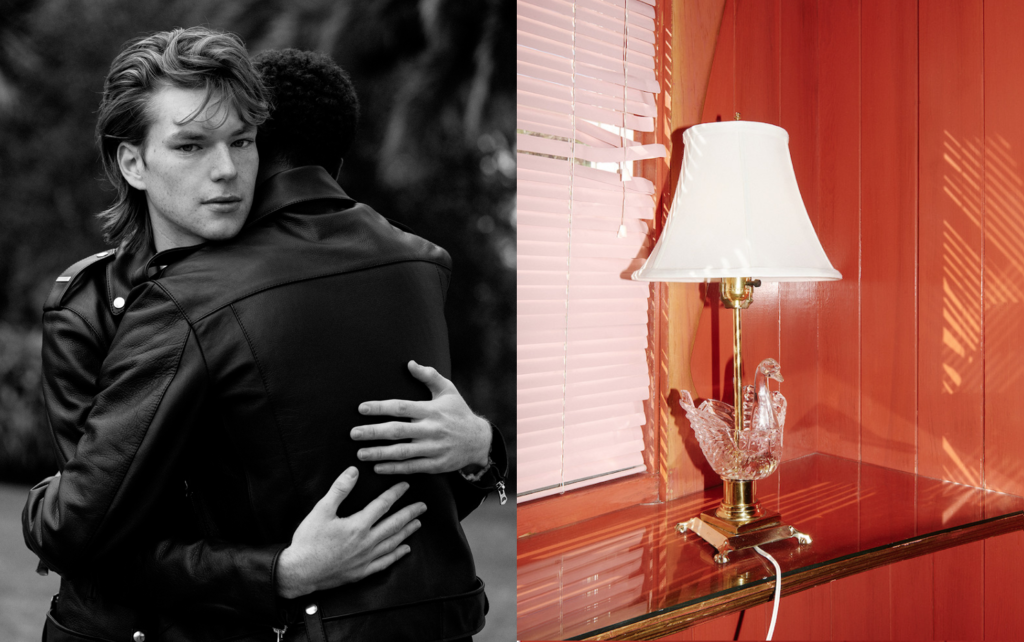 Ideas of masculinity are being hotly debated at the moment, so I’m interested to know what your ideal display of manliness is…I don’t have an ideal and I’m not attempting to create that within the series. I think now is a time when men who are comfortable in themselves can show the romantic side of their personalities without fear of being ridiculed as being ‘soft’.

You’re also looking at romance — what’s the most romantic situation you’ve ever found yourself in?
Not telling!

I hear you’re big on research. So, what types of material, or whose experiences were you researching to inform this series?
Funnily this series was far more instinctive than my usual projects. I based the characters of these men off stereotypes of masculinity smashing up against cliches of romance, and we’ve been sold these since birth so it was just from existence. I usually storyboard my work before I shoot, coming up with characters for the talent, creating a playlist that embodies the vibe etc. But for this series, I just knew exactly what I wanted, I spent a long time casting the right guys and getting the right teams together, but from then on the actual shoots were all really quick and very, very enjoyable.

You’ll also be in convo with Tom Ross — what’s the first thing you’re going to ask him?
Why he’s wearing that shirt. Out of all his shirts, why that one?

What do you secretly want to know about him or his work but might not have the confidence to ask?
Tom and I have been friends for a long time, and I’m lucky to have spent many many hours talking photography with him and neither of us ever run out of things to say. I’m a pretty blunt person, particularly with friends, so I’ve asked him almost everything.

What’s the best work you’ve ever made?
This ‘Romantic Boys’ series! Even if it’s just for the incredible joy I experienced when casting 7 bald men to sing ‘That’s Amore’ by Dean Martin for one of the images/videos.

What’s the best work someone else has ever made?
Sister Act 2.

In relation to your career, what scares you most?
Trying to figure out how to keep on an upwards curve while trying to raise an insane dumpling (my baby Max).

Best piece of advice you ever received?
My Dad’s catchphrase  – ‘They’re bastards, and they’ll get ya’ [laughs]. Colin Duck, what a great guy. He somehow manages to say it almost daily. It’s actually probably not the best ‘advice’, but when Dad says it, it’s kinda just like, ‘Shit happens, get on with it’

And the best piece of advice you’ve ever given?
Follow your drreeeeaaaaammmssss! 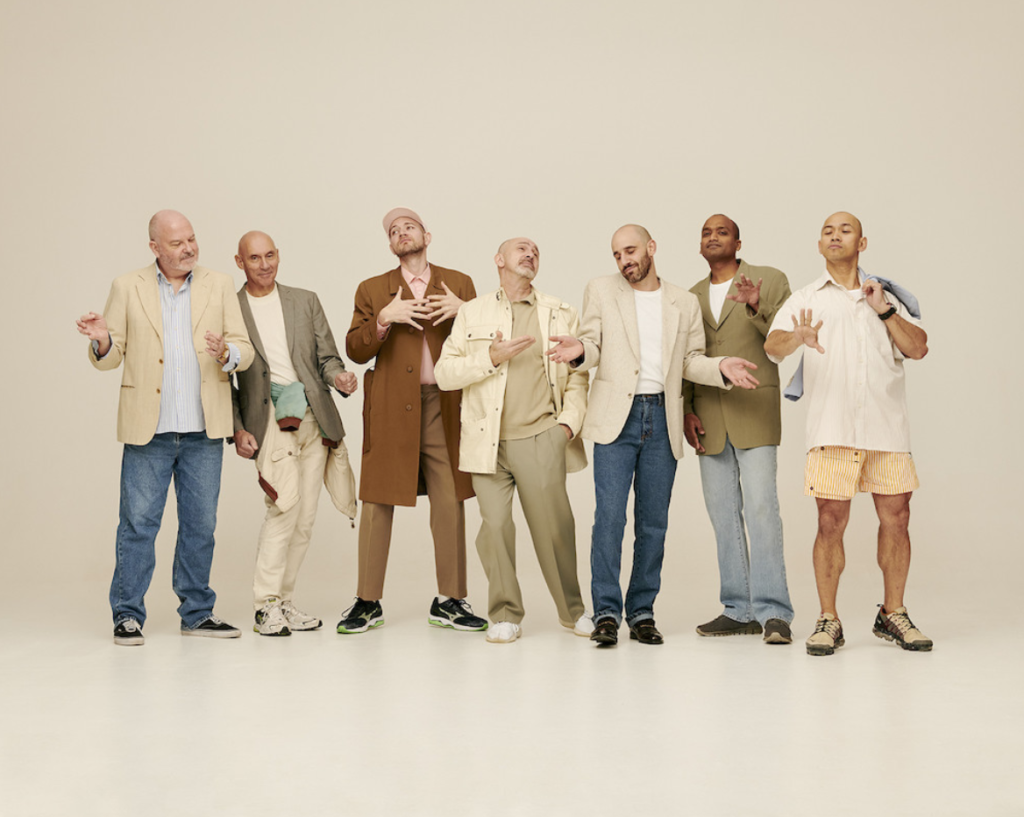