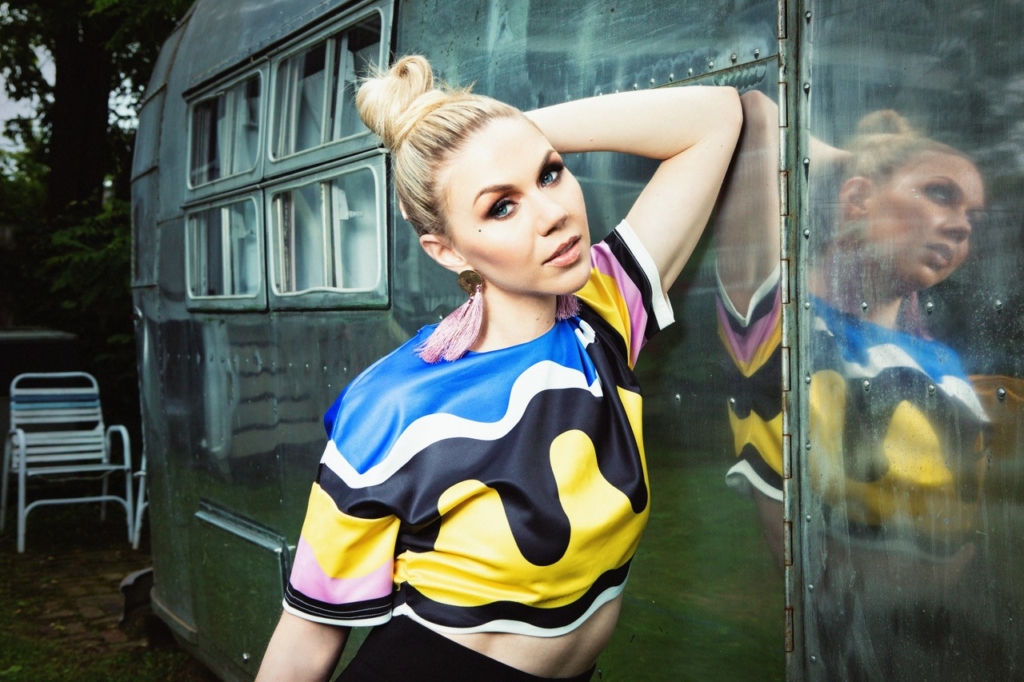 Straight outta Nashville comes Rayelle, the pop queen responsible for 2018’s slap ‘Get Dat’ — which has so far clocked close to 2 million views on YouTube and has casually appeared in a Samsung ad. It was followed by a four-track EP, titled Like What You See, a moment on the new Charmed soundtrack, and most recently Rayelle has released a collab with LÒNIS (which sits very close to our meme-loving hearts), titled ‘TFW (That Feel When)’. Not stopping there — she’s prepping to drop another single, titled ‘Freedom’ in October, and has a full-length project due before the year is out. Mood.

Her tunes swing between danceable indie and saccharine pop, and you can defs feel an influence from her childhood CD collection, which featured Erykah Badu, Alicia Keys and other women of that ilk. Since our intel on Rayelle goes no deeper than knowing every word to her recent bops, we asked her to answer a few questions…

Where did you grow up and where do you live now?
I grew up in Morrill, Maine and currently live in Nashville, Tennessee.

What were you into in high school?
I was super into R&B and soul music in high school. Lauryn Hill, Erykah Badu, Alicia Keys, and India Arie were all on repeat.

Which parts of your upbringing do you think might have been the gateways leading you to music/singing?
I was surrounded by music my entire childhood. Both sides of my family are very musical so it was everywhere I went. My father was the musical star of his family. He had a beautiful singing voice and could play anything on the piano, and by ear! He was an incredible talent. Family gatherings always ended up with Dad at the piano singing his heart out, while we all sang along. Some of my happiest childhood memories involve either listening to or singing with my father at the piano.

Do you remember the first time you realised you wanted to perform?
It started very early for me. I remember acting out make-believe concerts in my bedroom as early as 5 years old. But I was a very shy little girl so I didn’t show that side of myself to anyone until my first public performance as Annie in a local play at 10yrs old.

Which song are you most likely to be caught singing into your hairbrush to?
Well I don’t think I’ve ever sung into my hairbrush. Do people actually do that? Isn’t that just in movies? [laughs].

What does making music do for you? What sorts of life stuff has it helped you conquer?
For me, making music allows me to explore sides of my personality that I may be too shy to explore openly in everyday life. I find that I’m able to be much more confident behind a piano or microphone, and I feel the most like my true self when I’m singing. It’s therapeutic for me. It’s helped me process grief, love, loss, joy, you name it. Lately, I’ve found that my songs have almost become affirmations for me. Most have been written from a place of claiming my worth, trusting my ability to achieve my goals, and embracing a self-love mentality. And it works! I’ve definitely felt more confident and comfortable being me this past year.

What is it specifically about performing that you love?
I actually have a lot of stage fright and am still quite shy by nature, but my favourite part is when I’m able to let all of that go and just get lost in the song, the moment and feed off of the energy of the crowd. That’s the feeling I’m always aiming for onstage.

Tell me about your current single ‘TFW‘ — how did you connect with LÒNIS and what was it like collaborating?
I’ve been friends with LÒNIS for a while so it was a lot of fun collaborating with them. They’re super talented and have great energy which made for a very easy day of writing. We just had fun and tried not to take ourselves too seriously.

Obviously it’s a bit of an internet reference — do you like the internet?
Oh man, that’s a tough question to answer cause there are a lot of good and bad things about the internet. I guess overall I like the ability to connect with people from all over the world and keep in touch with family back home, but I think in a lot of ways we’ve lost real, genuine human connection and that makes me sad.

Any golden rules for staying happy on social media?
Yes! Don’t buy into the hype. Nobody’s life is perfect. I think it’s really important to remember that most people are showing the highlight reel of their life. Don’t get caught up in comparisons.

How do you hope people feel when they listen to you music?
I hope they feel empowered, encouraged, confident and that they matter.

Can you spill any info on your upcoming track ‘Freedom’?
It’s one of my favourite songs I’ve written in a long time. It’s an anthem for living your authentic life and being unapologetically you, whoever that is. I feel passionate about the message of the song and am really excited to share it with everyone!

Ok! What’s the best work someone else has ever made?
Rufus Wainwright’s Want One album

In relation to your career, what scares you most?
Being put in a box and only making one type of music. It’s really important to me that I keep exploring different sounds and styles, and pushing myself to try new things.

Best piece of advice you ever received?
“C’est tout dans la presentation,” which is French for, “It’s all in the presentation.” My high school French teacher said this to me right before graduation and I’ve never forgotten it. It applies to just about everything in life and is so true! From food at a restaurant to the way we communicate with each other. The way a thing is received is all in the presentation.

And the best piece of advice you’ve ever given?
Not sure I can answer that. I guess you’d have to ask my friends? I’m guessing it might be something along the lines of not letting fear stop you. It’s so easy to doubt ourselves and not go after things in life. I’m passionate about encouraging people to do it anyway. Be scared but do it anyway.