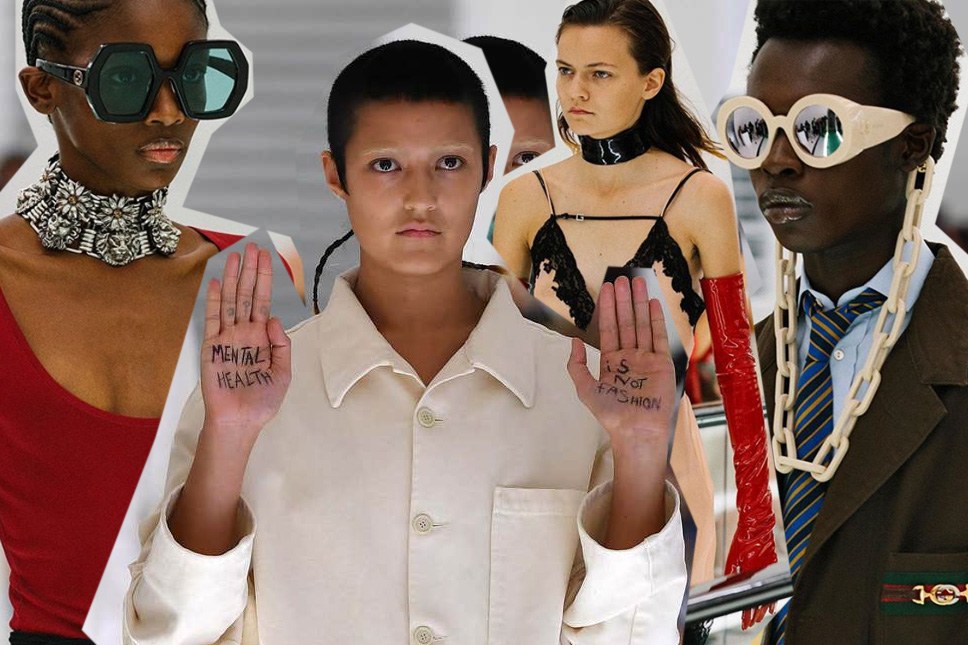 At Milan Fashion Week, Alessandro Michele’s presentation of Gucci’s Spring 2020 collection was certainly impactful. Set in an expansive and sterile white room, starkly lit, with bleached waiting-room seats, and a divisive and futuristic conveyor belt runway. The show was very Brave New World: utilitarian astronaut meets Orwellian dystopia (if you feel me). But it was references to mental health – including straitjacket-inspired looks – on and off the catwalk that offended people, including runway model Ayesha Tan-Jones.

The 26-year-old nonbinary model, artist and musician, silently protested — holding up their hands on the runway to display a powerful penned message: “Mental health is not fashion”. Ayesha then took to IG, criticising the major fashion house for its insensitive use of mental health imagery, “Presenting these struggles as props for selling clothes in today’s capitalist climate is vulgar, unimaginative and offensive to millions of people around the world affected by these issues.” Rant not over.

A later post from Ayesha revealed, 100% of their Gucci paycheck would be donated mental health charities. Ayesha also added that “many of the other Gucci models who were in the show felt just as strongly as I did about this depiction of straightjackets, and without their support I would not have had the courage to walk out and peacefully protest.”

Gucci came back via Instagram, responding somewhat indirectly to the protest and instead, clarifying the collection’s concept. Alessandro had “designed these blank-styled clothes to represent how through fashion, power is exercised over life, to eliminate self-expression. This power prescribes social norms, classifying and curbing identity.” Gucci also stressed the clothes were intended solely as a statement, and would not be for sale. Luckily, straitjackets will not be hitting a store near you.

Uniforms, utilitarian clothes, normative dress, including straitjackets, were included in the #GucciSS20 fashion show as the most extreme version of a uniform dictated by society and those who control it. These clothes were a statement for the fashion show and will not be sold. @alessandro_michele designed these blank-styled clothes to represent how through fashion, power is exercised over life, to eliminate self-expression. This power prescribes social norms, classifying and curbing identity. The Creative Director’s antidote is seen in the Gucci Spring Summer 2020 lineup of 89 looks, he has designed a collection that conveys fashion as a way to allow people to walk through fields of possibilities, cultivate beauty, make diversity sacrosanct and celebrate the self in expression and identity. #AlessandroMichele