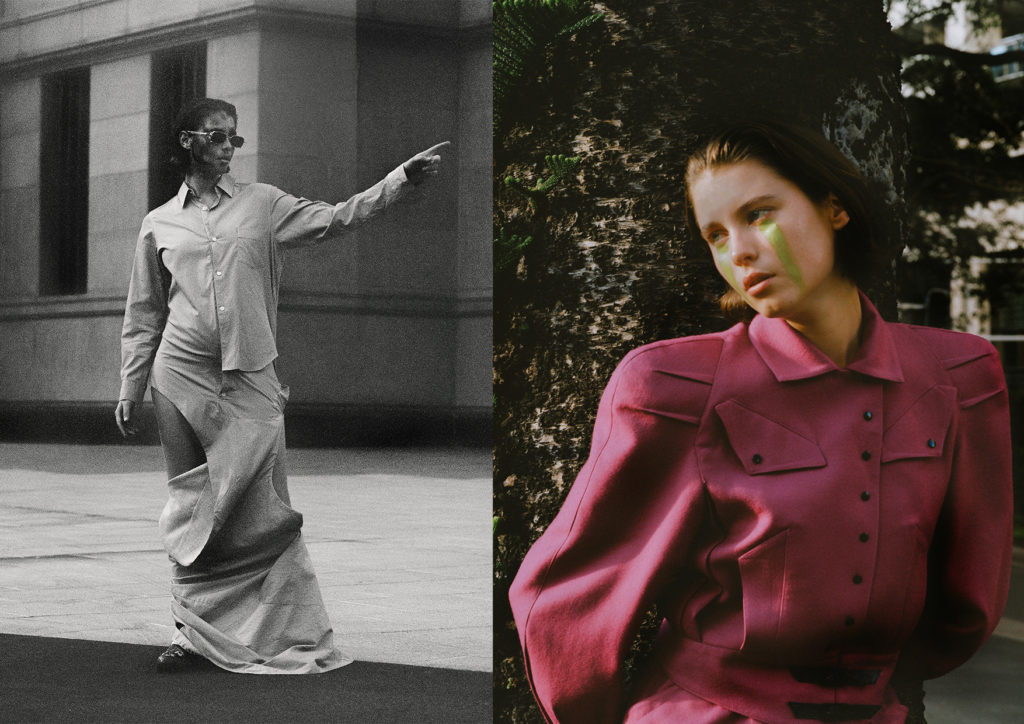 Alex Johnstone and Kurt Johnson have partnered to shoot rare finds from Melbourne fashion collection Aoyama Archives. To mark such a special occasion, AA director and buyer Sebastian Supel has supplied us with some liner notes — a brief history lesson — in place of traditional fashion credits. 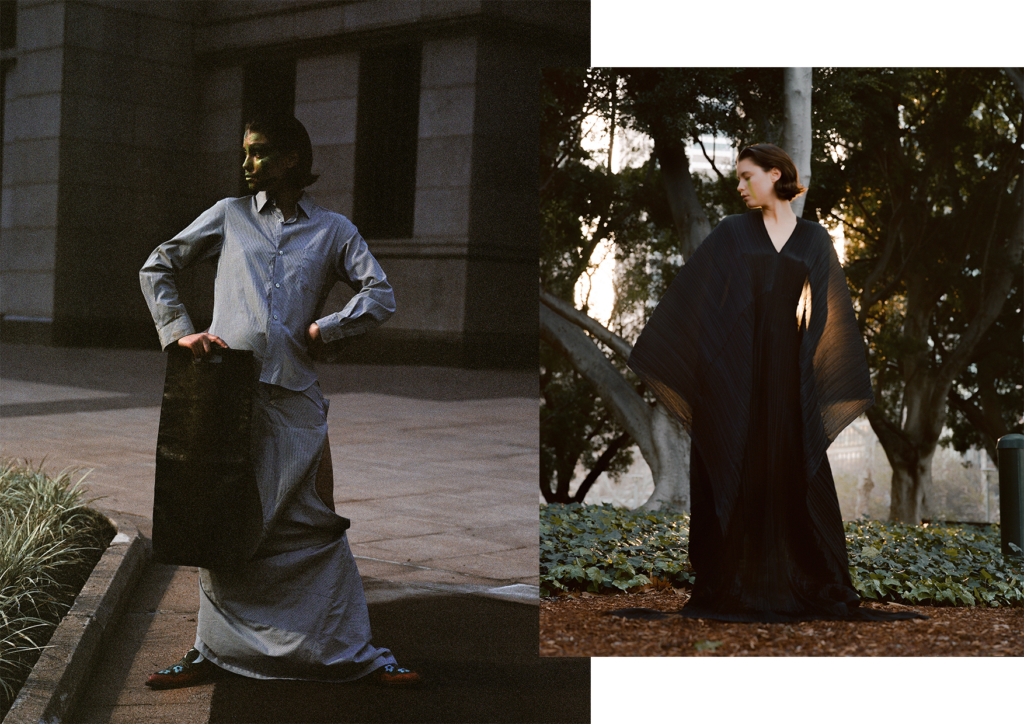 On the left, a Comme des Garcons Shirt-dress from Fall 1998. Collection entitled ‘Fusion’ was meant to be resemble grafted and collage panels formed into pieces, and fundamentally inside-out pieces in a deformation sense. Arguably one of Kawakubo’s purest collections to date. On the right is the Issey Miyake Madame T Shawl. Goths wearing Pleats? 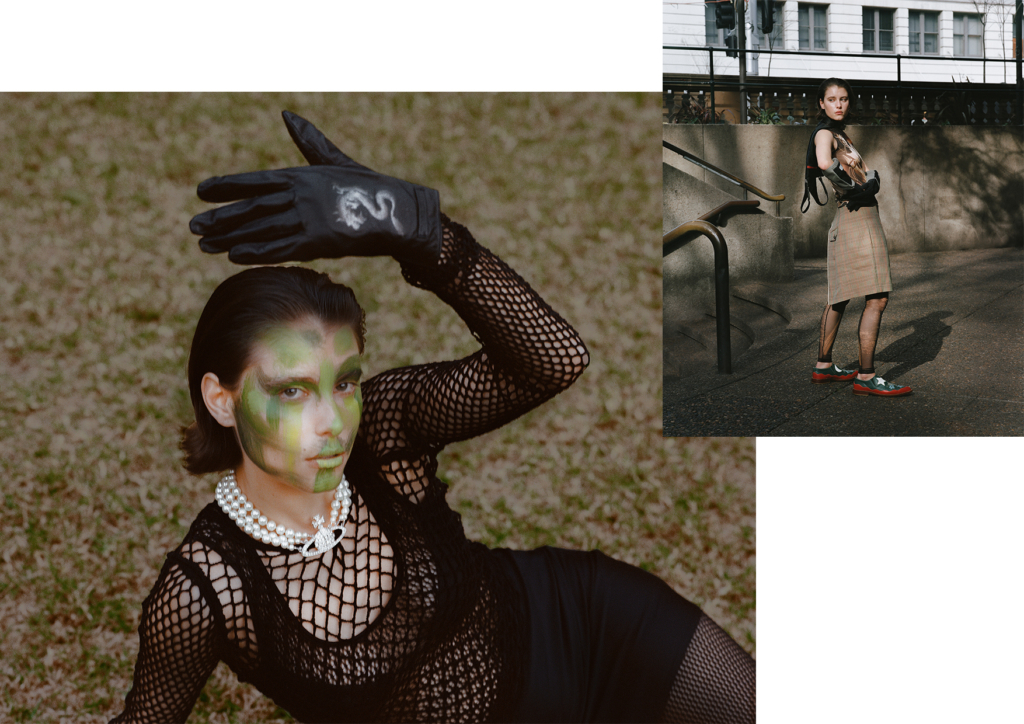 On the left is a Junya Watanabe mesh top over the top of what appears to be a Fendi mesh bodysuit, paired with the Vivienne Westwood 3-row Pearl Choker. What’s interesting about Westwood is the way she defined ‘Punk’ in an iconoclastic way. Like Gaultier and Galliano, they all pushed their fashion in an androgynous way to force individuals out of their comfort zone. I think this necklace is a prominent example of that. The fastening mechanism is an orb deconstructed into two pieces at the back so it can seamlessly snap apart/together which is super neat! Worn with Jean Paul Gaultier Dragon gloves from the year 2000.

The next look (on the right, and below) features a Prada rucksack from Spring 1999. The very start of the ‘Linea-rossa’ era (the thin red line). You could say it set the coarse for modern streetwear. They were fully functional and were essentially a “wearable membership card for a global class of high-taste individual.” Miuccia created this collection as a representation and response to ‘hippie fashions’ — at the time there was a revival of the entire hippy style, so her collection was an ironic comment to that, almost like a completely rebellious approach. 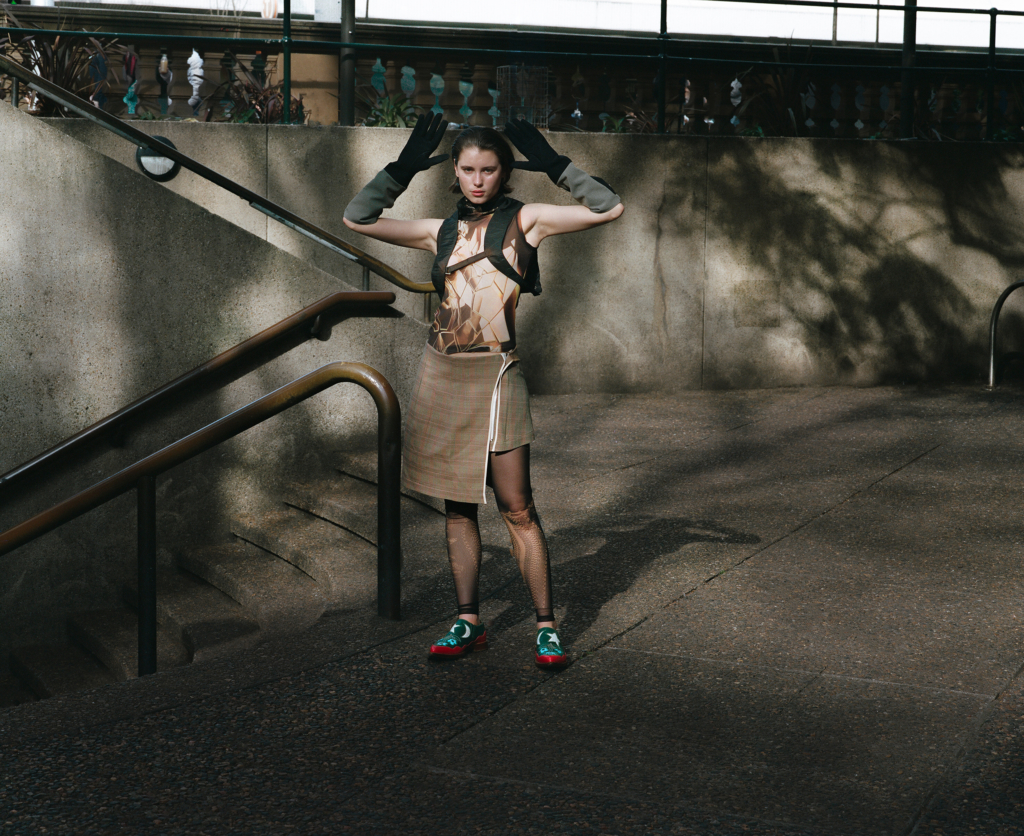 Worn with a Jean Paul Gaultier sleeveless mesh top, which I’ve not been able to identify the collection unfortunately — you could touch on the fact that these things are probably the most popular highly sought-after pieces right now and act almost like a currency in the archive world. Print’s like the Mona Lisa, 1994 Money print, Test-Pattern, the Japanese renaissance print from Spring 1999 and the most iconic being the Safe-sex print from Spring 1994 just to name a few. She’s wearing it with a Fall 1997 Junya Watanabe deformation corporate skirt, and Jean Paul Gaultier knee highs from the designer’s most renowned collection (Spring 1994). The shoes are Comme des Garcons Fall 1999 cowboy wingtips. That collection was entitled ‘Transformed Parody’ (though, if the show was a parody, as some have suggested, Never Mind the Bollocks might have worked as well). Worn with Prada menswear Fall 2007 gloves. 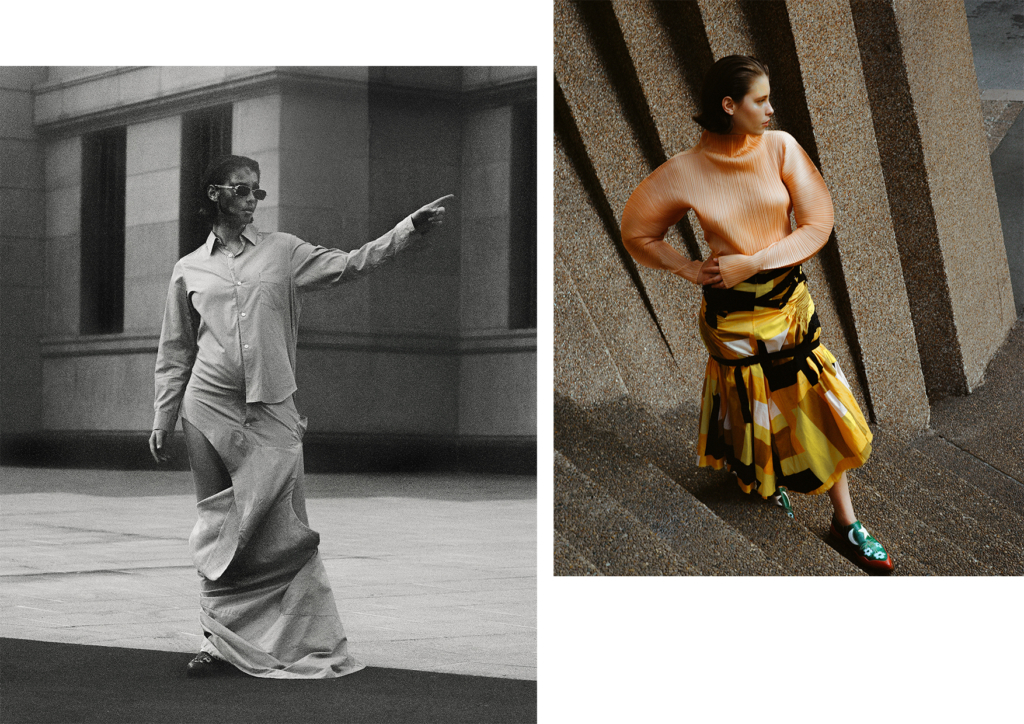 On the left, the Comme des Garcons Shirt-dress from Fall 1998 repeats. A little trick most people don’t know about Comme furthermore, is that from here on if you pull your Comme piece inside-out, you will often find that it is French seamed enabling it to be worn from the inside-out!

On the right, a Pleats Please origami top with a Junya Watanabe Spring 2003 Parachute Mermaid Skirt. A note on this collection, probably Junya’s most highly sought-after collection, was inspired by ‘Innocent 18th-century milkmaids who had parachuted into a field of summer flowers’. But less apparent with this particular skirt, which looks like this milkmaid veered off and landed on the street, painting road lines and got ran over in the process.

Up next is a one-off Issey Miyake Spring 1996 iridescent ensemble. The piece never got 100% completed and still has a french seam to complete on the back, which I think tells a really cool story. It’s almost as if they ran out of time, had to get the models out on the walk and had to ditch that one. Then it ended up in their sample showcasing, to a collector and now in our hands. Worn with the 1999 Comme cowboy wingtips. 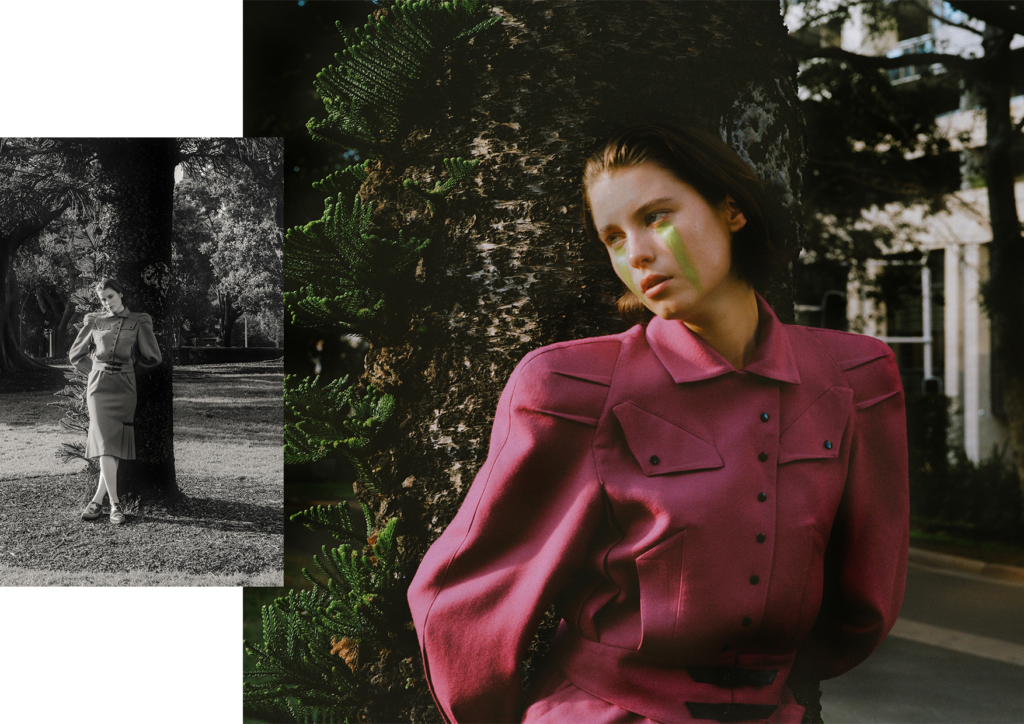 Then, the incredible Thierry Mugler purple military ensemble from the 80s — unidentified collection thus far, but our most focused label right now. Now that we’ve made Gaultier so popular, our close focus is on this designer. Manfred Thierry Mugler retired from fashion in the year 2002 when the industry and the shows became so dull and more about business — less about the shows, the spirit and entertainment. Fundamentally why Gaultier also chose to walk away from ready-to-wear and focus only on haut couture. My interpretation of Mugler is the ‘Memphis Milano’ of fashion. The designer focuses on empowering femininity, this particular ensemble almost resembles the military uniform of the French Resistance in the extraterrestrial eyes of Manfred Thierry Mugler. Worn again with the Comme spring 1999 cowboy wingtips.