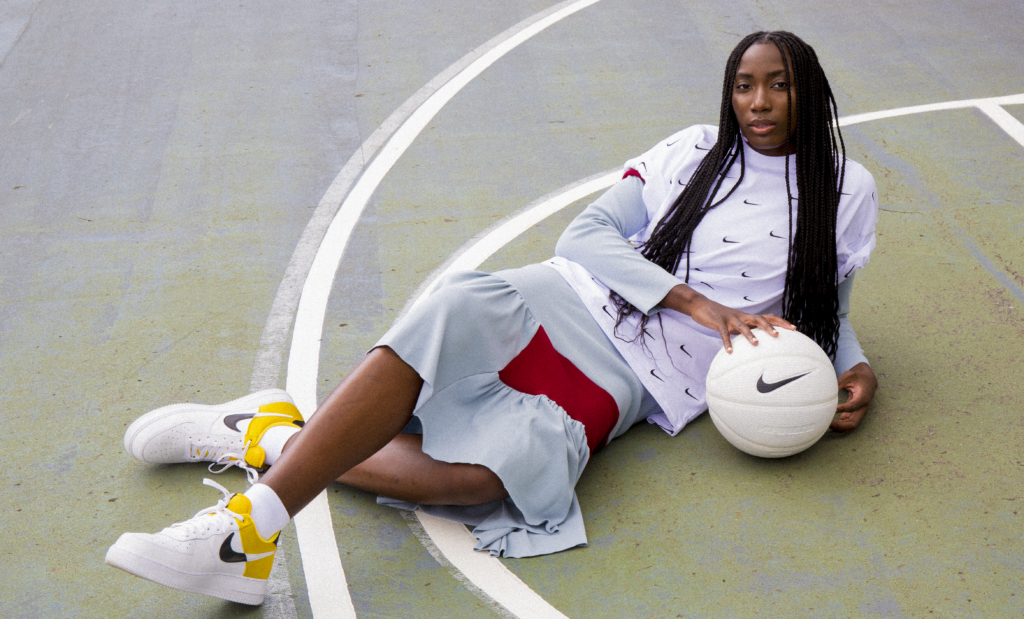 For 20-year-old legendary (already!) basketball player Ezi Magbegor, community is everything — starting with her family, who inspired her to start playing and who’ve spent the last decade or so driving her to and from games; her teammates and coaches over the years, who passed her the ball to begin with; and now Nike, who are backing her as she embarks on her WBNA journey.

In between being named MVP at the under-17 World Cup, helping Australia win another gold medal at the 2018 Commonwealth Games, and being recognised as an elite player on a global level — via getting picked in the WNBA draft by the Seattle Storm earlier this year — your girl Ezi hasn’t forgotten to pass on the inspo and encouragement to the next generation who are dreaming as big as she is.

Knowing full well that success only happens when you work with — and give back to — your peers, Ezi still makes the time to take her life-learned ethos to the local court. Most recently, she coached Melbourne’s youth at Helping Hoops – an independent charity running free weekly basketball sessions for young people. Supported by Nike, the program aims to create a sense of community in an increasingly diverse Melbourne and eliminate barriers to sport.

For Nike, the partnership is the perfect pairing that embraces their iconic Air Force 1 and its legacy as a catalyst for change. For Ezi, who’s been playing basketball since she was seven, the project is just another channel through which she can go hard on her mantra: “To whom much is given, much is expected.” And for us, the whole thing was the greatest reason to spend time in Melbourne with our new hero, in hopes some of her cool determination would rub off on us. 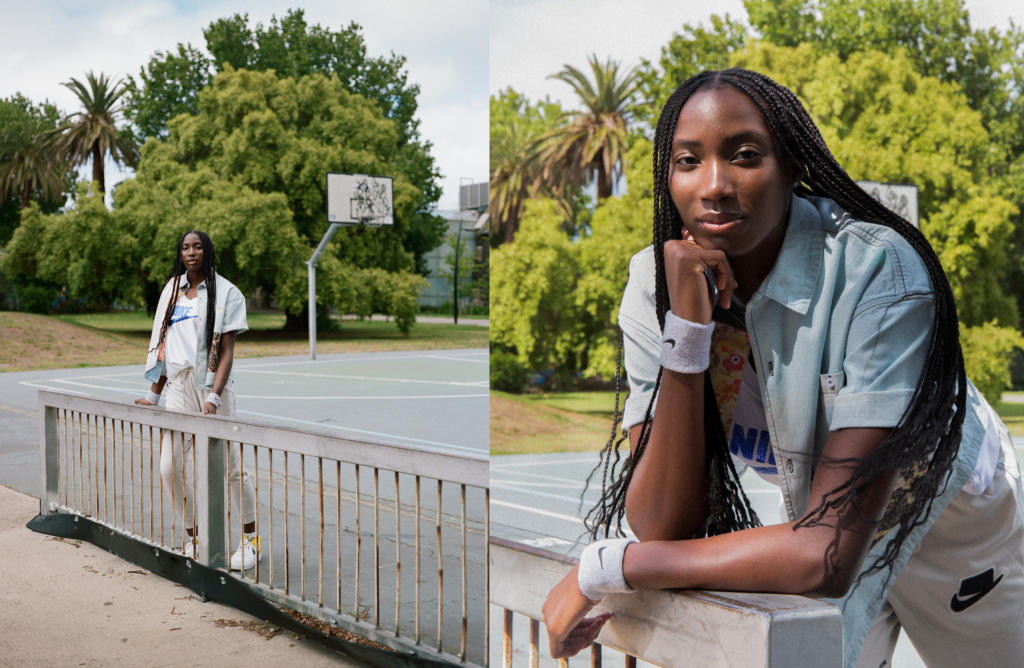 Hey Ezi — can you tell us about your relationship with basketball? How did you get into it and what made you stick with it?

Basketball is very important to me. I got into it because my older brother and sister started playing and I wanted to copy them, and I stuck with it. I wasn’t always good — especially at the start — it took me a while to develop the basic skills, but I think just being part of a team and seeing my friends everyday is something that helped me stick with it. Also, going to the Australian Institute of Sport to further develop my skills — being around more experienced coaches and players, led me to where I am today.

Are you traditionally a goal-orientated person? How does accomplishing your goals make you feel?

Goals to me are pretty important. It took me a while to figure out how the whole goal-setting thing worked. In the beginning, I would set too many goals and I wasn’t able to keep up with them. Then I learned to set one goal for a certain period of time — so, one goal for three or four weeks. That definitely helped and changed my mindset. Accomplishing goals makes me feel pretty relieved — like I’ve put in all the work to get there.

Do you remember when you realised and, most importantly, believed you were good at basketball?

When I realised, and when I believed, were at two different times. Being signed by the Canberra Capitals and going to Canberra for that 2017–18 WNBL season is when I realised that others saw potential in me, because, at the time, I didn’t really see it myself. Then, making junior Australian teams and being selected for certain things made me feel more confident and actually believe that I’m good enough to be here. 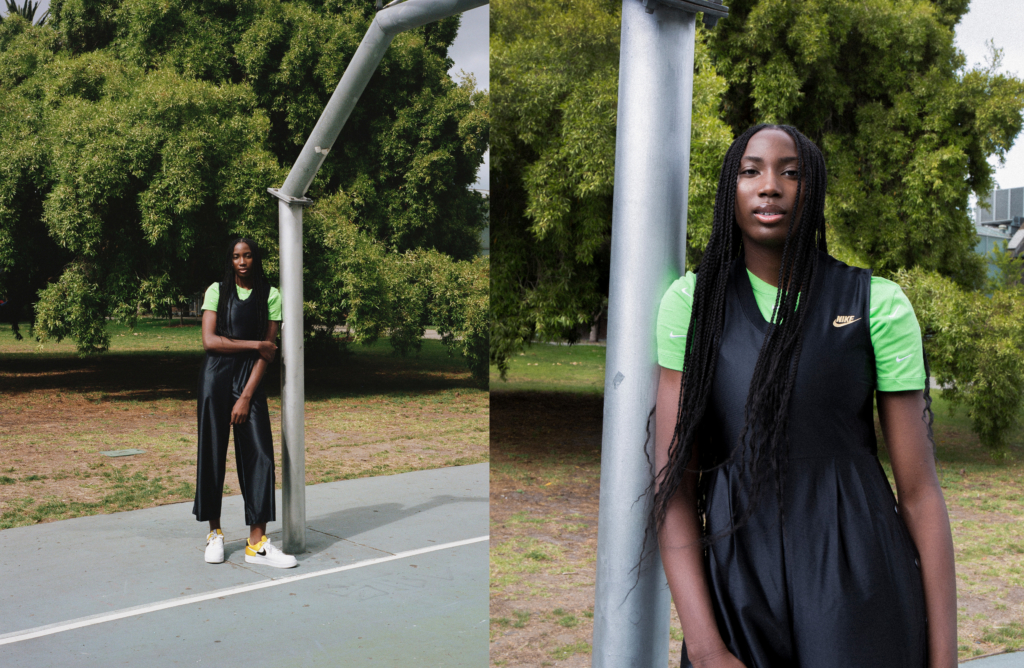 You delayed going to the US to play basketball to stay in Melbourne. Was the local basketball community a factor in making this decision?

I stayed in Melbourne and delayed going to the US to develop my skills as a basketball player both on and off the court. Being able to be part of the national team this year, leading up to 2020, was another big factor. Also, I’m studying at the moment, so being able to stay in Melbourne, play for the Deakin Melbourne Boomers in the WNBL and finish my degree was important, too.

I’m feeling pretty excited. Going over to America has been a goal of mine and being drafted was one of my biggest goals. So, being able to have that experience earlier on in the year was incredible, but there’s still a while to go. I still need to focus on this season and on developing my game further. I also want to get myself in the best situation come training camp to be able to compete against the best players in the world.

And what about being signed as an official Nike athlete… how does it feel?

I was really excited to sign with Nike — being a Nike athlete is an incredible opportunity and experience. Nike is huge in the basketball world — it’s almost synonymous with basketball — so I think it’s great to be part of that. But it’s the engagements off the court that I am really looking forward to. I was lucky enough to be part of a Helping Hoops session last week and that was such a humbling and exciting experience. I loved being a part of it, and I loved working with the young people as well.

"It’s really important to remember where you came from and pass on your knowledge and experience to younger kids."

Nike’s latest ‘All For One’ campaign is all about championing those who are leading change in the community. What are you doing with the basketball community to champion change?

Working in the community and giving back is a big thing as a professional athlete. It’s really important to remember where you came from and pass on your knowledge and experience to younger kids. Things like Helping Hoops… being a part of that was incredible.

What did you work on with the young people at Helping Hoops?

At the Helping Hoops session, I got involved with a few drills with the kids to see what the program was all about. It was great. It felt like I was just another kid. And seeing their smiling faces and watching them laugh… it was so easy to be around them. It’s also so diverse and multicultural, so I think it’s really great to have someone who looks like them go in and work with them — it makes them, I hope, feel more comfortable. By the end of the session, I know I was pretty comfortable, and they were coming up and giving me hugs. It just felt really good. 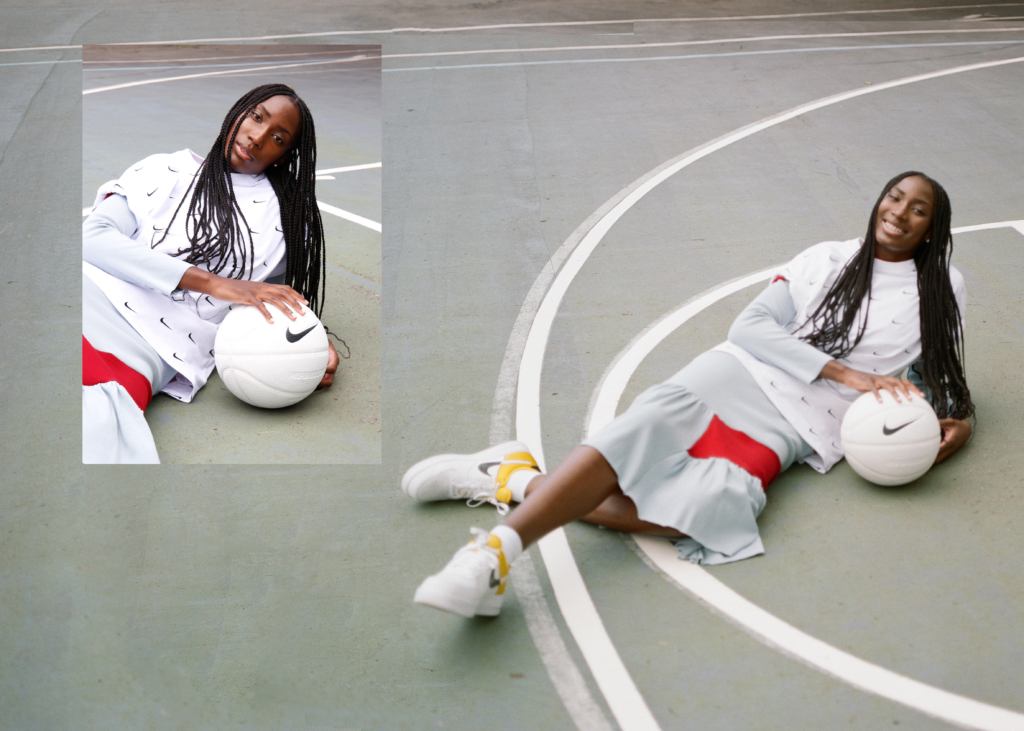 And what about you, what did you get out of it?

What I took away from the experience was that there are struggles in all age groups, and having something to escape to or something to look forward to each week is really helpful. I could see that [the kids] were excited about [the program] and it made me feel really happy for them that they had something to do. The initiative is free and it’s local, it takes away barriers. It’s great, and I think it’s an initiative that should be all over the world.

How important is it for the basketball community to support the next generation of local talent?

I think it’s really important for the basketball community to support the next generation of local talent. There are definitely a lot more resources and facilities that are available to the future generations and it’s important to show them that at an early age and expose them to different events that are free and local, so that we can take away those barriers for them to start playing. But like I said, I think it’s just really important to start at a young age and get them going, so that they stick with it in the future.

Who motivates and inspires you?

My family definitely motivates and inspires me. Growing up, my parents drove around all of Victoria with four kids on a Friday night — taking us everywhere to train and play. I recognise that and want to do well for them, they’ve been so supportive of me, as have my siblings, and that’s something that motivates me. Not everyone is fortunate enough or privileged enough to be in that situation, and to be able to have the experiences that I’ve had. I know that it doesn’t come easy, so I need to give back. I remember reading this quote: ‘To whom much is given, much is expected.’, We are held responsible for what we have. If you are blessed with talents and opportunities, it is expected that you utilize them to benefit yourself and others – that’s what motivates me.

"Setting goals and actually achieving them – that’s the result of hard work."

What does hard work mean to you?

Just doing the extra 1% on and off the court… doing the extra bits everywhere and all the things that others aren’t doing. That’s what hard work is, and you’ll see the results at the end. Setting goals and actually achieving them – that’s the result of hard work.

What interests you outside of basketball? Is it important for you to have a second thing to focus on that you are passionate about?

It’s definitely important to have a second focus outside of basketball. For me, I love reading and giving back — that’s something that’s really big for me. I’m also studying psychology at the moment, so that’s a second focus that I’ve always been interested in. And just being able to associate psychology with the sporting world is really important, especially now that mental health is such a big focus in all sports, not just basketball.

To be a part of the Seattle Storm WNBA team and — as next year is an Olympic year — to make the Australian Olympic team and be in Tokyo come July/August. It’s still quite a long process leading up to Olympic selection but it’s definitely my number one goal. 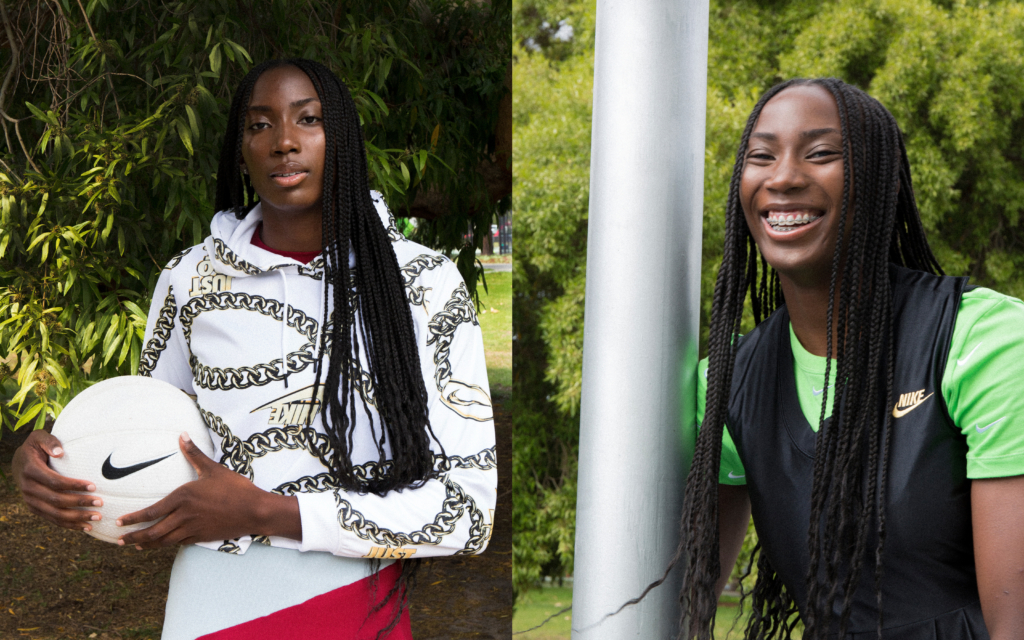 Produced by Oyster in collaboration with Nike.