Oyster Issue 117 is available now via the Oyster Magazine Shop 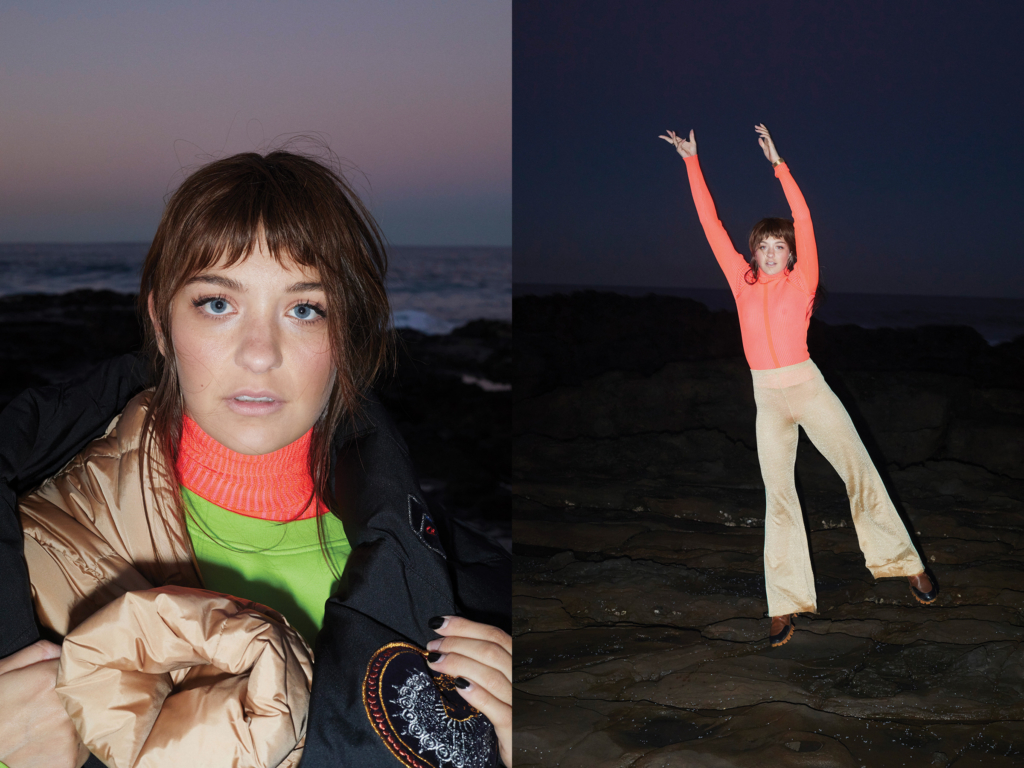 When we think of pop, we often think of the sugary sweet singles Britney and Christina were belting back when we were still in braces. But not CXLOE. Australia’s new dark pop queen is reimagining the genre with her spellbinding anthems about toxic love, which are perfect for the angsty mall goth inside all of us. And when she’s not dropping tracks like last summer’s ‘Sick’, she’s busy staying true to the refreshing honesty and contagious hooks that have made her one of our most exciting new voices — all while remaining the antithesis of every pop star trope. For CXLOE, it’s not about writing catchy songs (though she does that, too); it’s about “breaking down all the walls in pop music,” she explains, “and seeing how far I can push it.” 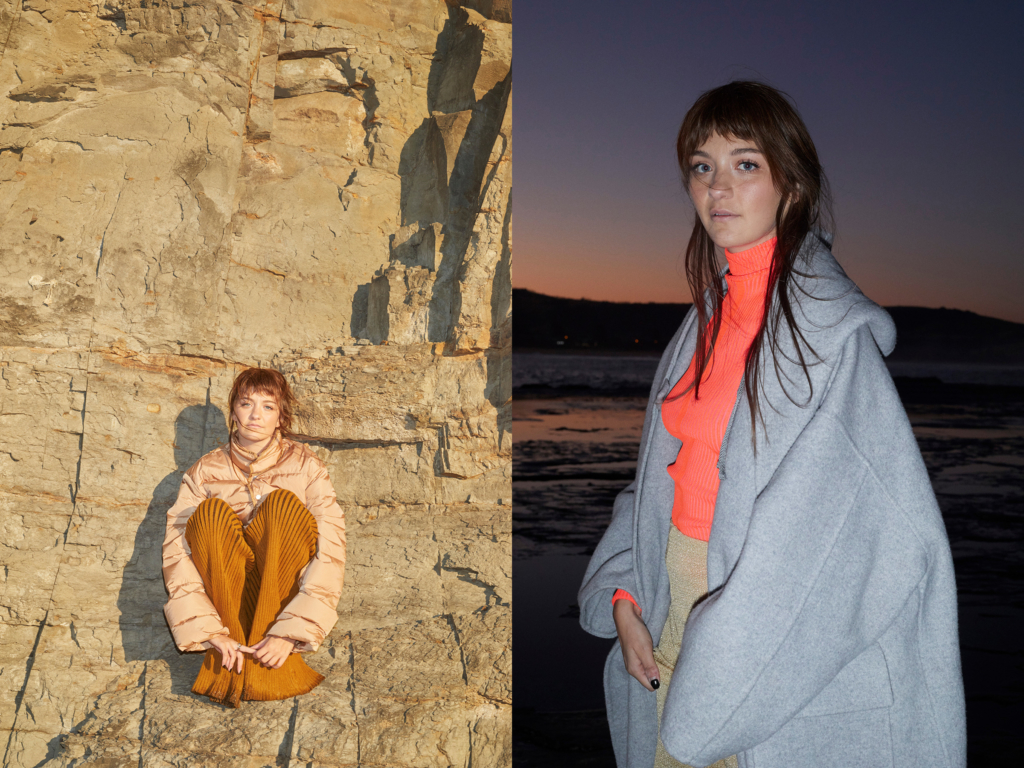 Alexandra Weiss: I just listened to your song ‘Sick’. Can you tell me the story behind it?

Have you ever actually felt that way?

Oh my gosh, yes. I’ve been with my boyfriend now for six years, and it definitely came from that experience. But I didn’t want to write just a normal love song — I wanted to put a twist on it — and I think that everything I do comes from a more complex headspace. I’m quite intense with how I see things, and I always feel a lot, and I wanted to get that into a song. So, I’m really happy with how it turned out. And with gnash — I’ve never done a feature, and I wanted to get someone on the track who was as hyped about it as I was.

Do you think you feel more than the average person?

It’s funny, I’m at this writing camp right now with 20 other songwriters — you get to learn that you’re not alone in those feelings. We are all really emotional human beings — that’s what allows us to dig deep and write songs. When I go home to Sydney, or Australia, or even just a smaller town, I feel like I’m an alien in that respect. Some people have emotions and can stay on one level, but I definitely feel like I’m a pendulum in always feeling so much. And that separates me from most people, but as artists, I think we always feel a lot more.

“Some people have emotions and can stay on one level, but I definitely feel like I’m a pendulum in always feeling so much.”

The songwriting retreat you’re at, what’s it like? And how does it differ from your usual songwriting process?

It’s pretty hard. You get thrown into rooms and have to write. It’s very much like speed dating, and you have to let yourself get to know people super quickly and let down your walls. Otherwise, you won’t get anywhere. Everybody’s different, but in my process, I really like to go in with a solid idea and a title for what I want to write about. I think if you have a title, you can work backwards, as opposed to writing a song without a strong concept there. Whenever I come in with a title, it gets the ball rolling really quickly. I’m always writing down little titles — these are just things that I think of during the day or see on TV. Then I just feel it out and listen to songs I like, and songs that I’ve already done, and eventually, you just build this full body.

Are you working on an album while you’re there?

We’re just writing songs, whether or not they end up being for another artist or ourselves. But I have been writing a lot, and I’ve got my sort of ‘greatest hits’ selection of songs that I’m sitting on and will probably put out early next year.

You describe your sound as ‘dark pop.’ What does that mean?

I have these feelings that I know everyone has, but I think that dark pop is about flipping them on their head. That’s what I love to do — make things a little bit broodier and a little bit dirtier, and the lyrical content a little bit darker. I love that world.

How close is the CXLOE persona to who you are IRL?

Well, it’s Chloe with an X, so she’s an extension of me. We have the same personality, but I feel like putting an X in the middle of the name gives it this separation — this girl’s darker than me, and allows me to release my own darker emotions and lyrics. It’s like it’s a hyperbolic version of me — it’s an exaggeration, but it’s still everything that I feel. But it’s also a kind of barrier for me to turn off when I need to, because I need to sustain myself, as well. Especially because, when I get on stage, I get so sucked into the performance that it becomes unreal, like I’m a different person or in a different dimension. That’s why I love performing — being able to get sucked into a song and just let everything go is such a different experience than being in the studio.

@dad I went to University ! 📸 @dannyhowe

You’re currently in France, and even though you’re not performing, what’s the difference between playing in places like Europe or the US versus Australia? Is it better, or more powerful, because it’s where you’re from?

It is, especially in Sydney. It’s incredible, because I’m surrounded by people who have been following my journey for a long time and dealing with my shit, and my emotional roller coasters, so seeing them come to shows and being able to actually see what I do is really rewarding.

How do you think your style has changed since you started?

I definitely started off in a darker space sonically because I wanted to make it obvious where I wanted to go. But I’ve fallen back in love with pop music, and I think that’s what I’ve shifted back to, while still keeping that bit of darkness.

What makes a song perfect?

I love production — it’s actually my favourite bit — and I hear the production and melody before the lyrics. So, for me, I think that a really good beat, chord progression and concept is key. When I hear a catchy song with a killer concept, I really appreciate it.

What’s the last song you heard that had one?

‘Wanted’ by One Republic! It’s perfect, the whole thing. It’s amazing — the first song in a long time that I played 50 times the first day I heard it.

Do you think there’s a misconception that pop music is super shallow?

So, you think it’s possible to be real while you’re singing a catchy hook?

Definitely, one hundred per cent! There are a million ways to do pop. But where I come from, it’s hard to be tied to that conception, because in Australia, on mainstream radio stations, we’re still playing songs from 10 years ago, like Pink. So, it’s really difficult to break that mould. We do have stations like Triple J, which take lots of risks with new and upcoming artists, but that’s more indie and alternative. In the commercial pop world, we’re still trying to get rid of the idea that pop can’t be genuine.

Your lyrics definitely are, and you seem to touch on love and loss a lot. Are there any other themes you always find yourself going back to?

I always find myself going back to my internal struggles with my head and my heart. I think I write more songs about my headspace than about actual relationships because I don’t want anyone to feel alone in their emotions. I’ve felt that way before, and it’s not crazy — we all get like this sometimes. But for me, songwriting is just about analysing the way my brain works. I think I’m always just trying to figure myself out. Sometimes it’s funny because I’ll write a song about something that hasn’t happened yet — it’s like my body trying to tell me how I’m feeling but it’s only months after you actually go through it that you realise, ‘Oh that’s what I was writing about.’ It’s really weird.

“I write more songs about my headspace than about actual relationships because I don’t want anyone to feel alone in their emotions.”

Has that happened recently?

I remember I was in LA, and I was writing a song about wanting to be home. At the time, I thought I was super happy, but a few months afterward, I became so homesick that Australia was the only place I wanted to be. It was so strange, because I was loving being in LA, and just a few months later, I never wanted to go back there.

What do you think you’d be doing if you weren’t a singer?

I think I’d be a vet or working with dogs in some way. I love animals and dogs so much — as much as I do a great song.

What about social media — has it been a big part of your career?
Yes, unfortunately. I hate social media, it’s the devil. But with the way everything works right now, you need to be on it, and you need to keep self-promoting, even though that’s my biggest fear — I cringe every time I have to do it. But it definitely helps with getting yourself out there. Regardless, I don’t take it too seriously, so it doesn’t affect me as much as I see it does others, but it plays on my mind all the time. Like, ‘Oh god, I have to post this, or share that.’ I’m just trying to not give it too much weight.

How do you find a balance between being true to yourself while still knowing that you have to do those things?