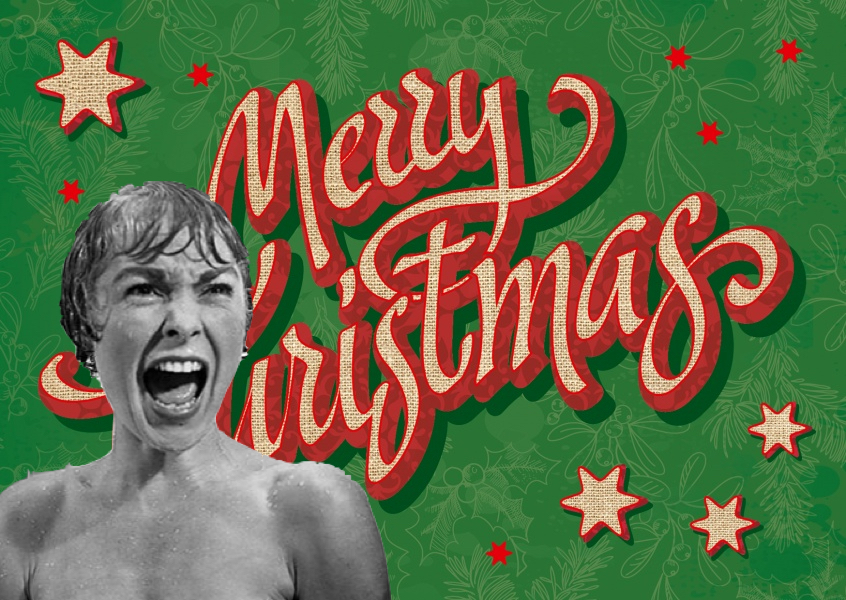 The holidays are never easy. There’s the travel, the creepy uncle who voted for Trump, the constant overeating…. and 2020 has only added a whole new level of terror when it comes to these merry (or hairy, depending on what your fam is like) gatherings. For many of us, the pandemic and travel restrictions mean not being able to see our families. Then there are those of us whose families make the Bates clan look sane and, thanks to COVID-19, are stuck together in quarantine. That’s why we’ve rounded up ten of our favourite horror flicks to help you escape the Misery that is 2020, preferably while keeping effortlessly cozy. Depending on which of the previous categories your tribe falls under, these creepy classics will either distract you from not being able to see your loved ones or make you grateful that your brood isn’t as dysfunctional as you thought you were. Just don’t get any ideas.

And you thought your mother-in-law was a lot? The 1960 Alfred Hitchcock classic or the 1998 remake starring Vince Vaughn will do. Or why not both? That’s, like, three and a half hours of alone time in your room. Just be careful not to piss off a loved one before you take a shower.

Though this film is named after another not-so-happy holiday, it’s a true testament to the bonds of family. Plus, you’ve got, like 10 versions to choose from: the Carpenter classics from the ’70s, the cheesy ’90s sequels, and the Rob Zombie version of the franchise. The latest film in the series came out in 2018 and gives us a look at a new generation of Meyers women. Word is, there are two more movies coming out in 2021 and 2022. So, like the franchise’s masked murdered, Michael, it just won’t die. Kind of like the Christmas dinner conversation when your aunts and uncles ask why you’re not yet married.

Another classic, Stanley Kubrick’s 1980 masterpiece is a cautionary tale for staying sober (or, on the other hand, getting too drunk) while quarantined in a remote locale with family. And if you have two creepy twin cousins, well… just don’t go playing with them in room 237. Or anywhere, really.

This one’s not so much about family, but it is about survival, which is much needed during the holidays (and pretty much all of 2020). It also doesn’t hurt that it’s about a post-apocalyptic world that’s been totally destroyed by a mysterious virus. Sound familiar? Though in Danny Boyle’s 2002 horror, the world has been overrun by zombies. After almost a year in lockdown, many of us are looking — and feeling — like the undead. So, it looks like Boyle’s film was eerily prophetic.

The Hills Have Eyes

There are two families in Wes Craven’s 1977 film and the 2006 remake: the cannibalistic mutants, and the Carter’s, the suburban American dream family who get stranded in the desert and hunted by the former. Which one reminds you most of your kin? If the answer is the Carter’s, then the four movies in this franchise (both versions have a sequel) can distract you from the fact that you’re likely not able to visit your loved ones this season. If the answer is the cannibals…. well, good luck. Hopefully, either they make you appreciate your fam, or give you some joy before you’re the main course at Christmas dinner.

You know that quote “All happy families are alike, but every unhappy family is unhappy in its own way”? Rob Zombie’s 2005 horror proves Tolstoy might know have known exactly what he was talking about. Enter the Firefly family: a rag-tag band of murdering clowns, strippers, pyros, pimps and psychos, who seem more than happy — as long as they’re murdering pretty much everybody. The Devil’s Rejects is part two in the franchise about the fam, which also includes 2003’s House of 1000 Corpses and 2019’s Three From Hell. If you’re looking for a heartwarming family flick this Christmas, this sure ain’t it; but it’s definitely got a lot of blood, guts, and family loyalty.

Like Halloween, there are quite a few films in the Texas Chainsaw franchise. There’s the original 1974 slasher, and the subsequent eight remakes, prequels and sequels. But they all center around Leatherface, a dude who wears a mask made from human skin with a penchant for chopping people up with you guessed it, a chainsaw. At its core, the films are about the way people can turn other people bad; and about duty to family. The moral of the story is: don’t let your crazy family — or anyone, really — turn you into a masked, chainsaw-wielding villain. But also, family over everything.

There’s a lot that can be learned from the Scream movies. First, your super hot boyfriend is probably a killer; second, survival is key; and third, the ’90s had the best everything. In Scream 4, our final girl Sidney Prescott (who, for real, deserves a damn break after all she’s been through), returns to Woodsboro as part of a book tour. Of course, upon her return, her old pal, Ghostface re-enters the picture, this time to go after her cute teenage niece, played by Emma Roberts. Spoiler alert: Roberts is the killer, because she wants to be even more famous than Sidney. So, yeah, family is complicated. Also, shoutout to Scream 2, because Mrs. Loomis is the killer, wanting to avenge her son’s death. A mother’s love, am I right?

Speaking of a mother’s love: Friday the 13th is the ultimate story of a mama bear going all out for her cub. In the first film of the never-ending series, Mrs. Vorhees is the killer. Oops, sorry. But now that you know: in the slasher, Mrs. Vorhees kills a bunch of camp counselors as revenge for the drowning death of her 11 year old son, Jason, while the counselors were busy partying. If you’ve seen any of the other films in the franchise, then you know that Jason didn’t actually die — he survived, and grew up as a hermit in the woods only to become our favourite big bad in a hockey mask. By the way, there’s enough Friday the 13th films to keep you busy well past the holidays: there’s twelve, plus a television series, novels, comic books, video games and a whole bunch of merchandise. You’re welcome.

The Haunting of Hill House

Though not a film, this Netflix series is one of the best horror releases of the last few decades. Based loosely on the 1959 novel of the same name, director Mike Flanagan’s TV show is all about family, trauma, and the ways in which we deal with it. At times heartbreaking, I binged all 10 episodes when it came out in 2018. Flanagan’s second series in his Haunting anthology for Netflix, The Haunting of Bly Manor, came out in October — it wasn’t as good, but also deals with family and trauma, and if you need an excuse to hole up in your childhood bedroom for a few days, it’s worth it.

Though not a traditional horror flick, in many ways, Frank Perry’s 1981 Joan Crawford biopic is the most terrifying of all the films on this list. Based on Crawford’s life after adopting two orphans, the movie will make you appreciate your parents. Just trust me.