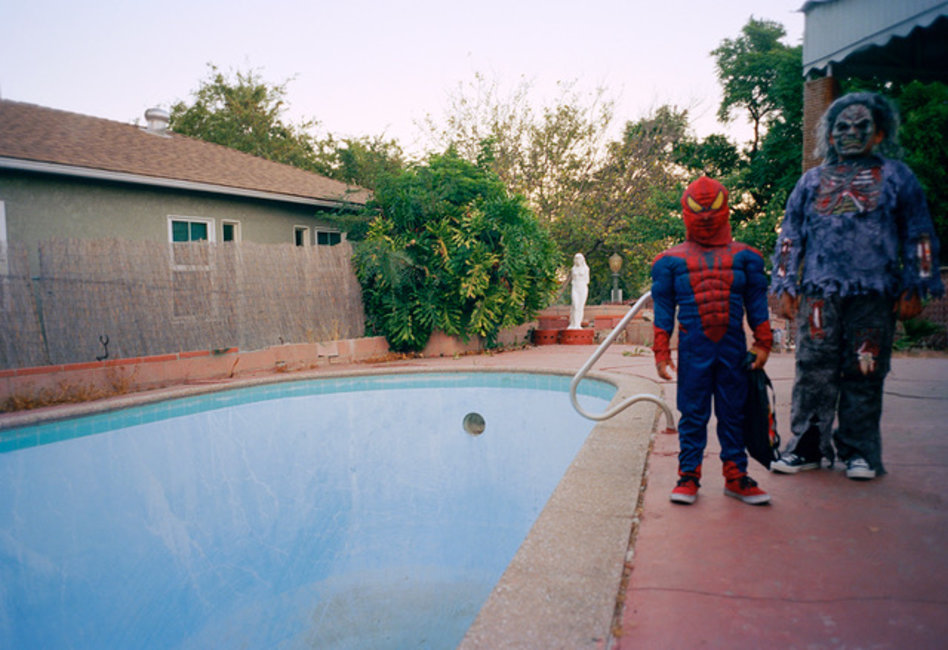 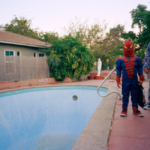 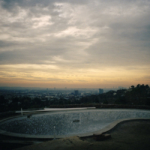 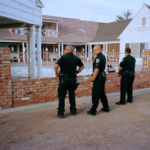 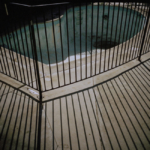 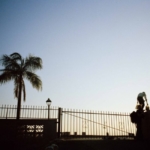 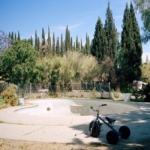 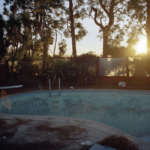 Tino Razo has been fanging around on a skateboard for over 30 years. He’s also been tracking down all of the empty pools in Southern California and taking some pretty incredible photographs of them. They celebrate the skate community that he’s so devoted too, but also this idea of a lost American dream.
He’ll be showing off the pics for the first time in Australia this week (Party In The Back opens April 21), with help from RVCA Corner Gallery and the Heavy Time Institute. In the lead up to the opening, we asked him a few questions and he told us about guns being pulled on his mates and ending up at a Black Panther house.
Name: My name is Antonio Olaguer Razo jr.
Nickname: Tino
Spirit animal: My dog Chunk
Where are you from and where are you currently living?
I’m from Bennington Vt and currently live in LA.
What were you into in high school?
Skateboarding and acid.
How would you describe yourself and how do you imagine others would describe you?
Out to lunch.
When do you feel the most free?
Skateboarding and walking Chunk.
Most memorable interaction you’ve ever had with a stranger?
Happens far to often to think of one.
How do you find the pools you’ve photographed?
Apple Maps, Google Earth, lots of driving, and friends.
What do you listen to while you’re missioning to photograph them?
At the time there was a lot of Butthole Surfers, Ween, The Band, Burzum, Fleetwood, King Diamond/Mercyful Fate, Roky Erickson, and that song Tezeta by Ethiopiques was on a lot. Many jams actually. I get super into singular jams and play the fuck out of them.
Your photographs, in this series, consider a lost American dream. What’s your American dream?
Skateboarding with my friends and finding a way to live in both LA and NY.
When did you realise you’d ~made it~ as a photographer?
I’m not a photographer. Just a dude that loves skateboarding and his dog.
Do you like having your photo taken?
I don’t like to be seen at all. Being photographed is my worst nightmare.
If you could change one thing about skating, what would it be?
Nothing. Because my skateboarding is me and my friends and I love them all.
Back to the photos. They all tell stories, of course. You’ve got one about a Black Panther house and about a gun being pulled. Can you tell them?
Well the Black Panther house was kinda crazy. The story anyway. I found the pool and skated a couple of times and reached out to my friends mother that works in real estate to see if she could help me rent the house. She did some work and researched the house and discovered the house was lived in by an original female member of the Black Panthers. Soon after that on one of my visits back the house was still abandoned and by now fully equipped with cameras and sensors. She apparently is being taken care of by them in Oakland but the house is still hers.
As for the gun. We had a pool we were hitting and on that was a great shaped paddock pool but the surface was pretty shit. People lived there but we would go on week days because we figure they just worked a regular 9 to 5. I gave the pool to a friend from Hawaii and he must have gone on a weekend and the owner came out with a riffle pointed at him and made him leave. That’s really all the story I have on that. But that’s the deal. You’re on someone’s property. My man coulda shot my friend and wouldn’t have gotten in trouble for doing so. You’re breaking and entering and that’s that.
Party In The Back opens April 21, 6-8pm at RVCA Corner Gallery, 82 Stanley St, Collingwood.
Photos: Tino Razo