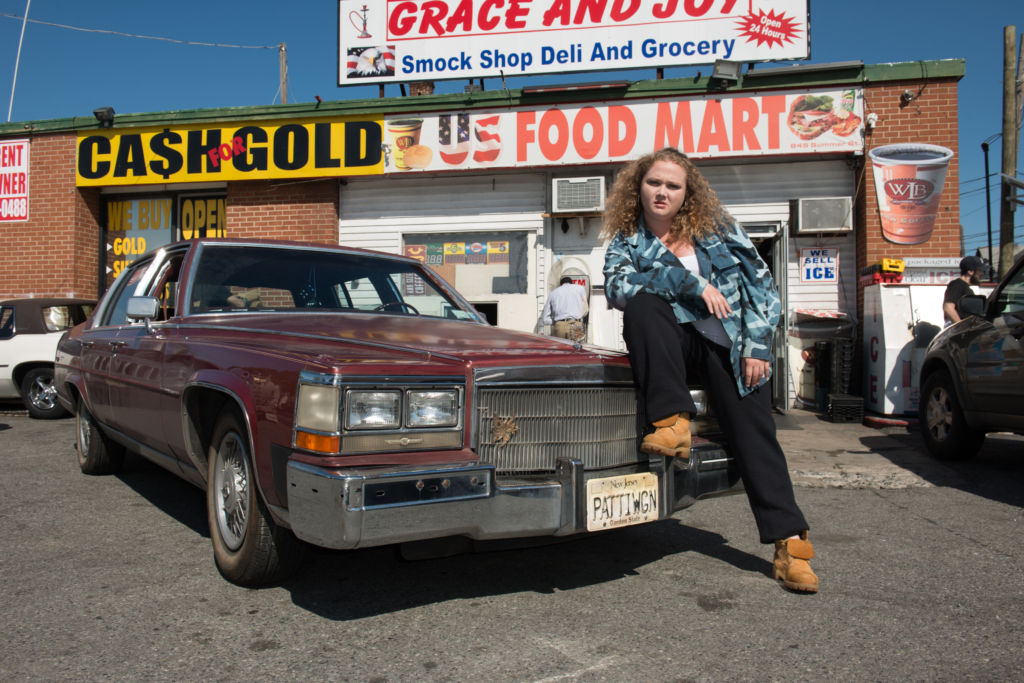 Australian actor Danielle Macdonald scored the role of a lifetime, starring as a fairly unconventional aspiring rapper in Patti Cake$. The film is so freaking inspiring, and even got a standing ovation at its premiere at Sundance Film Festival.

It’s not Danielle’s first time on the screen at all — she starred opposite Joel Edgerton and Rosemarie DeWitt in Rachel Weisz’s short film The Thief and made her feature film debut in the thriller The East alongside Brit Marling, Ellen Page and Alexander Skarsgard. She’s been on loads of TV shows and also has a spot in everyone’s new fave film Lady Bird. But this film and role, Patti Cake$, is incred. Not only does she successfully switch from her Australian-ness to become a New Jersey rapper, but she becomes this beaming heroine.

So feel-good, so ~live your best life~, we had to catch up with her…

Growing up in Australia, did you ever imagine you’d play a rapper from New Jersey?
[Laughs] No, never. I was more surprised than anyone else when it happened, to be honest. But getting the part was a different process for me because I’m used to auditioning, then doing callbacks, meeting the director, then maybe getting the role. This wasn’t like that.

So how’d you land the role?
Geremy [Jasper, the writer and director] did the Sundance Labs and he got to bring out three actors. He found me through one of the Patti Cake$ producers who’d seen me in a film. The producer put my photo in front of Geremy, who was like ‘That is what I pictured’. Then Geremy saw one of the films I’d done and he was like ‘She can act, cool – she’s coming out to Sundance’. He sent the script to me and I loved it but I was always like ‘This is not me and I don’t know if I can do it and what on earth has this guy seen in me that makes him think I can?’ I spoke to him because I wasn’t sure and he really convinced me. I could tell he had such a strong vision and he had this faith in me that I didn’t have in myself.

You’re so bold in the film, it’s hard to imagine you needed convincing like that…
When you read a script that you can’t put down and you love it then it’s a sign that you should do it. When something terrifies you it’s usually a good thing.

Were you an aspiring rapper or musician when you were younger?
I’m not a musical person. I learned how to do it for this movie. I always stood in the back of the choir when I was younger so no-one could hear my voice, but rapping is different. It’s such an amazing form of poetry and art and I definitely didn’t have the confidence to do it in the beginning and [laughs] I still don’t. To be honest I don’t know if I ever quite got there but at the same time Patti in the movie lacks confidence in some ways so it kind of helped with the performance.

Are there any other ways you relate to Patti?
I really connected with her because she’s from a small town and she really wants to be in an industry that she’s not necessarily going to be welcomed with open arms into. I definitely felt that way because I wanted to be an actress and Hollywood generally has a fairly typical stereotype that I do not fit into. But I wanted to do it anyway so I definitely related to Patti’s struggle and her mentally overcoming that by having the confidence and the drive to do it. A lot of the time society has this idea of what box we should fit into and no-one really fits into a box perfectly. I think everyone can relate to Patti in a way because everyone feels lost or like they’re trying to fit into somewhere they don’t fit at all. Everyone’s felt that; it doesn’t matter where you’re from and who you are, it’s just life and nature and the journey of figuring out who you are. But Hollywood has actually opened its arms a lot in the past few years. I think it’s finally starting to tell different stories and we see different people and cultures and genders and sexualities. That’s what we want to see. Movies and TV are telling different stories. There are so many new things people are really loving and opening their arms to. That’s really great. There’s still a long way to go but it has started.

I loved your performance, and the film. It made me cry! Has the response been good?
It’s incredible. After the festival screenings it’s been so great. It’s amazing when people enjoy a film and can relate to it. We had such a great time making it that when people have a great time watching it that feels really nice. You never really think about the reaction you’re going to get so when they come up and say ‘Thank you for representing me on screen’ it makes me feel like ‘Wow, that’s really amazing because I would have loved to have seen more people like me up there when I was a kid’. It’s incredible.

Yeah, as soon as the film ended it felt like Patti would be a role model for people. Who were your role models growing up?
Anyone that did something, and not just in Hollywood, and just went for it even if it wasn’t necessarily what they were meant to do… That inspired me. I was like ‘That is freaking awesome because you’re just being who you are and going for it’. People in my everyday life inspired me to do that, just little actions here and there. As for work, there are definitely actresses and performances that inspire me. They’re just too numerous to name.

Back to music… what do you listen to?
I like everything. I can be listening to rap and hip-hop, then pop-rock, anything. It just depends on my mood.

I imagine you had to do some training for the film?
I did, yeah. In pre-production, about a month before filming, I started working with a Brooklyn-based rapper called Skyzoo. I’d go hang out with him and his friends at the studio. We’d work on songs and watch rap documentaries together or just hang out and talk. It was very much about seeing the day-to-day lives of these rappers, then he really helped me find my movements when I was rapping. That was something I was stressing about. I was like ‘Am I meant to look a certain way?’ and he said ‘No, because if you’re thinking about that you’re doing it wrong – you just have to feel it’.

Not that I would ever want to see you ditch acting, but is there anything in you that wants to be a rapper now?
We are doing a soundtrack, but I do not rap as myself ever. I do not rap as Danielle, but it was something I completely absorbed myself in as this character for a few months. I only know how to rap as Patti in her voice. I wouldn’t have the confidence to do it as me. I’m lucky that I have Patti to hide behind to do it.