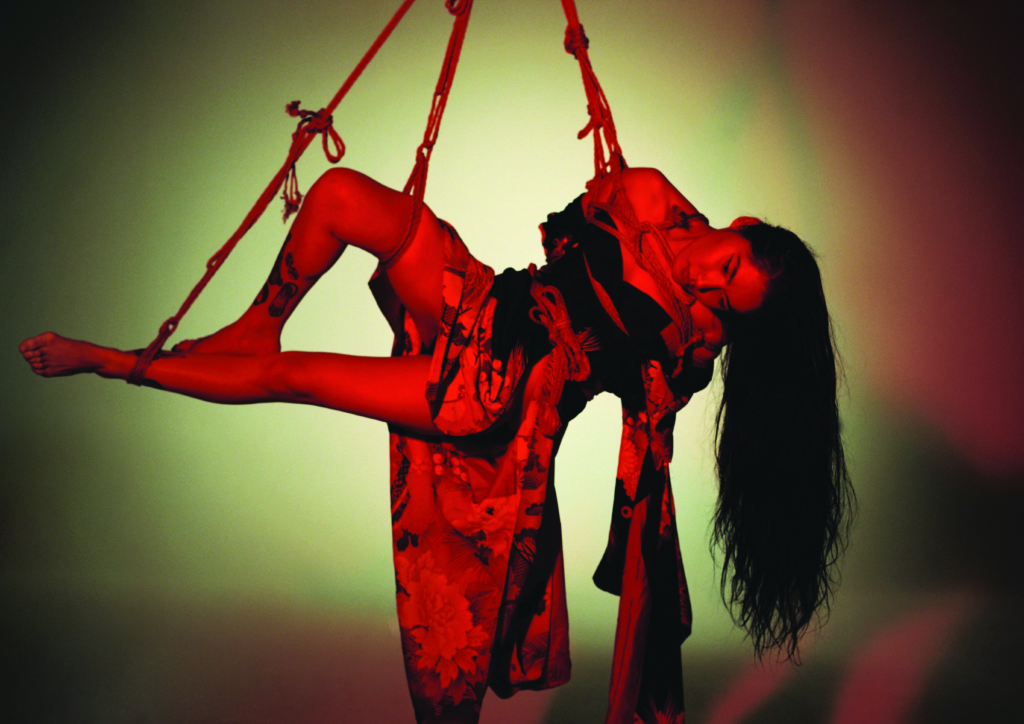 Japan-based artist and designer Leh YSL is all tied up in the romance of Kinbaku. Though often the one publicly hoisting women into the air in the name of art — she too indulges in being held tightly for her own private pleasure. It might be this well-rounded perspective that allows her to very successfully adapt her performances per audience, and push her submissive partners just as far as necessary. But her success might also be the effect of her emotional riposte to the activity: “Being tightly bound to someone or bound by someone — that loss of control in itself is the nature of love”.

Which definition applies to what you do?
I prefer the term Kinbaku, despite the negative connotations. I think being tightly bound to someone or bound by someone — that loss of control in itself is the nature of love. It sounds intimate and romantic to me. Yes, on the contrary it can sound misogynistic and violent. But everyone’s BDSM is different. It could stand for Bondage, Sadism, Service, Slave, Masochism, Master… it’s like the Rorschach inkblot psychology test. The way we interpret a word or a concept shows our emotional functioning and underlying thoughts. I’m a hopeless romantic, so to me the word ‘Kinbaku’ shows a yearning for romance.

And what kind of reputation does it have in Japan?
Japan is a very conservative country. Kinbaku has pretty negative pornographic or sexual connotations in Japan. Despite lots of people being into it, it is very taboo and in a legal grey area. Most of the people I know who are into this stuff would not openly admit it. They hide their ropes in rental storage spaces or at friends’ places, and have their faces covered or cut out in pictures. It’s seen as shameful, and the Japanese government shamefully wants to clean it up in time for the Olympics. It’s a side of Japanese culture the government wants to hide, despite the craft and technicality Kinbaku practitioners have put into refining this art. Thanks to Nobuyoshi Araki, some younger Japanese, kind of hipster crowds are starting to appreciate it. It’s typical of the Japanese concept of ‘Gyaku-yunyu’ which means ‘reverse import’. Often something of Japanese origin doesn’t gain popularity in Japan at first, but when people in the west start to recognise it, the Japanese will then follow. 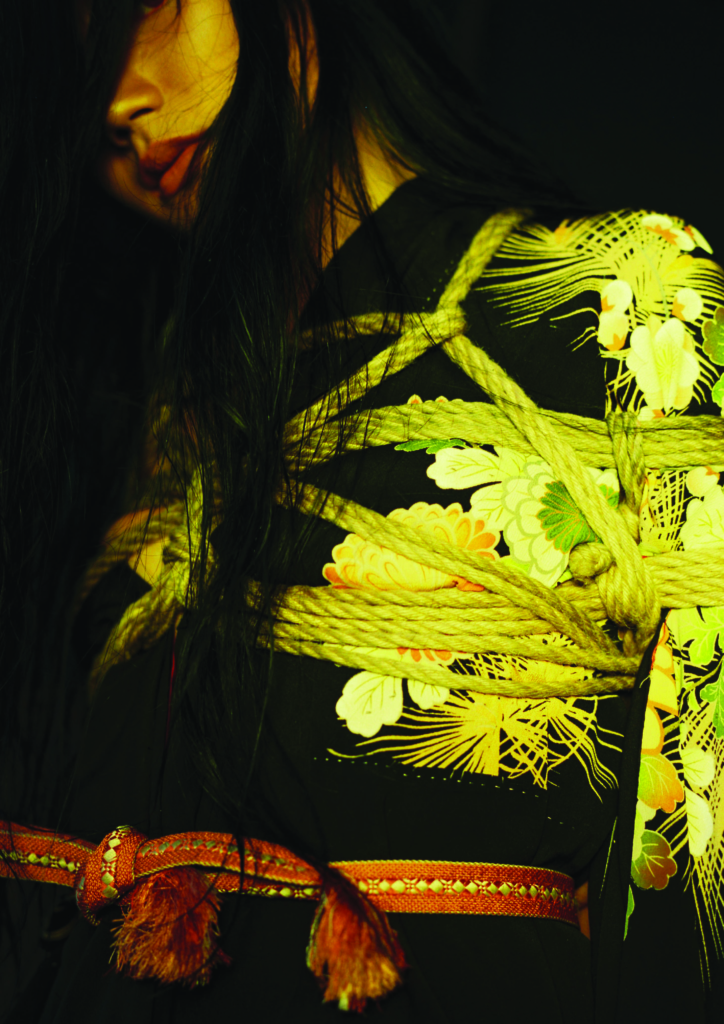 And when and why did you decide to become part of the scene?
I played around with it a little at home and at fetish parties at first. It feeds into my creativity. Really it’s for myself, and those I want to be intimate with. I guess I got deeper into it because I wanted to learn new techniques. My rope teachers and dominatrixes around me suggested that I should go professional. So now I kind of do it as a side gig but mainly it’s for my art.

Do your friends and family all support you in it?
My parents are typical conservative Asian parents. They know what I get up to but I don’t think they’re supportive of it. They’d be happier if I stuck with my old nine to five pharmacist job.

Would you say it’s a kink for you or an art form?
For me it’s 90 percent art and 10 percent kink. I started learning Kinbaku from an artistic perspective, but I do still practice it from a BDSM perspective sometimes. If the objective of tying is for a photo shoot, I’m focused on the creative process, poses, colours, compositions, being able to convey the story and emotions in a picture. I often try to draw inspiration from fashion, film, humour and irony. I hope that people will be able to differentiate and understand this. I do often try to desexualise the sexual subject of Kinbaku; make my pictures look innocent and romantic. I’m always trying to show that Kinbaku is more than a sexual kink. For example, the model reminiscing on a lost love and intimate moments she had in that relationship. In those pictures the audience can be seduced into conjuring up their personal sexual experiences 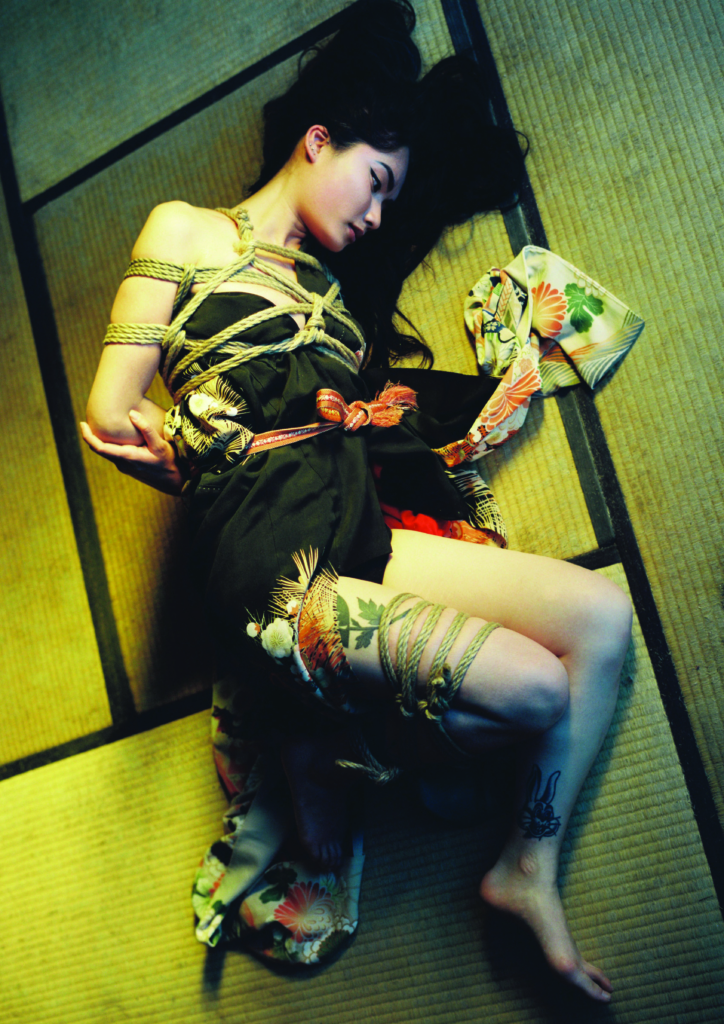 What about when you’re dealing with people who more experienced in their roles?
When it comes to tying masochists or subs it’s a lot more messy — some of them want to get hurt, chase that high without thinking about the consequences, some of them do it for the attention — I’ve been stalked by masochists. It does get quite difficult to differentiate when roleplay is involved. In relationships we often don’t say what we really mean. We pretend to be someone else so that people will like us. I’m sometimes paid to provide a fantasy, which can be misleading. Especially since subs like to get attached and clingy. I mean, the nature of the illusion is supposed to be blinding. How do you know when to wake up or keep chasing pleasure. Like I often say: don’t be sad it’s over, just be happy it happened. Reminisce on the experience like an old movie you love.

While it can be seen as a way to control or dominate someone, do you also think it is empowering?
Absolutely. I love that in Kinbaku you can see a girl be so vulnerable and strong all at the same time. I love seeing the girls’ reactions when I show them the pictures I take of them tied up. I’ve had girls tell me, “Wow I’ve never seen myself so sexy.” A lot of girls tell me the Kinbaku experience is such an adrenaline rush — like bungee jumping. They’re really happy they did it.

The rope tying must take a lot of practice. Is it dangerous?
Yes it does take a lot of practice. Not just the safety and technical side of it, but also how you read and react to your rope bottoms or sub’s reactions. A lot of these Kinbaku techniques put girls in extreme distorted poses. You can easily get hurt. For photo shoots or shows, we want to impress the audience and we will push the limits. Often the rope bottoms are in pain but they won’t say anything or use a safe word. They want to impress the audience and they don’t want to disappoint the rope top. I think that being good as a rope top or Kinbaku-shi doesn’t depend on techniques, it’s more about how well you can connect and understand your rope bottom. In the rope scene, my favourite person is a volunteer doctor by the name of Golden-San, who treats Kinbaku injuries for girls who are too embarrassed or too scared to go to the doctors.

What does a typical performance of yours looks like?
I love fashion so I always spend a lot of time thinking about the outfits for the performance. For me, the performance starts the moment we get dressed. I want the girls to get into character and feel sexy. Then I play sensual and mysterious music and I slowly undress the girl. To me, there’s nothing more sexy than watching a girl get dressed and undressed. As I start to tie her up, I will try and match my movements to the rhythm or mood of the music. I gradually start to tie faster and more aggressive. Once the music builds up, I’ll suspend the girl in the air and do a few transitions. Then I bring in candles and whips. If there are a lot of males in the audience, I try to make my show more sadistic. For example, I’ll light the candles, drip wax on the girl and then maybe scratch the wax off with a knife and put out the candle on the girl’s butt. But if I see a lot of girls in the audience, I try to be more romantic. I will put out the candle with my hands, to show them I feel the same pain as my sub. When whipping, as a mistress, you must show eye contact and elegance. You should look strong but not barbaric. As the show comes to an end, I like to give the girls gentle kisses while in the air and thank them for being strong. In the end, I like to untie them to some romantic music while they’re lying on the ground.

It looks like you mostly work with other women, why is this?
I do tie up a lot of boys too. I enjoy kicking their asses but it tends to look pretty aggressive — not really a thing I like to take pictures of. The mentality behind why men and women like getting tied up is different. For women, Kinbaku is like being bound or held by a lover, whereasguys are curious about how much pain they can take. Or they like to feel like a prisoner, and get teased while tied up.

I read that you work with Alexander Wang, too. Can you tell me what you do and what you’ve learned?
A lot of people think tying people up and doing shows is my full time job. But really I am a behind the scenes planning person. I worked in retail merchandising for Alexander Wang in Japan. It’s actually licensed by a Japanese department store, so its completely different from what most people in the West thought Wang stood for — it’s pretty conservative and uptight. No one at the office knows I like to tie up girls. I’d be fired for it. But I love Alexander Wang because I believe he knows what it’s like growing up in a conservative Asian family, and wanting to be creative. I also love that he always envisions cool, strong and sexually confident girls for his collections.

Do you have any words of advice or encouragement for anyone wanting to participate in Kinbaku?
This is going to sound pretty cheesy and cliché… but I guess what mums advise girls about losing their virginity: be smart, stay safe, people lie. I lost my rope virginity to a not-so-nice guy. He was a very good, professional Kinbaku-shi — he was a good actor. He put me in an illusion, and showed me amazing natural highs. I trusted him, I thought we had real intimacy, but that was just in my head… I learnt my lesson. Overall, I am thankful for the experience. We start off like water, no shape, easily manipulated, but gradually we become ice. We harden our hearts and toughen up. Let the ropes be your ice sculptor.