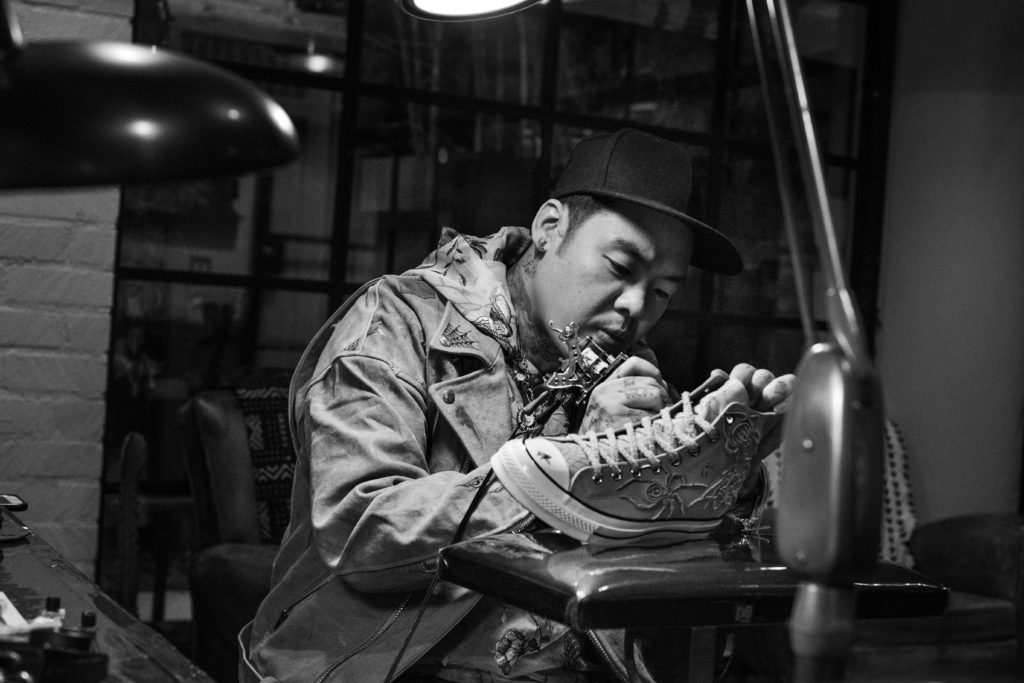 Dr. Woo is famous for his delicate single-needle tats that favour artsy merit over tough guy status. So famous, that other really famous people line up to get inked by him — Drake, Zoë Kravitz, Miley Cyrus, to name a few. Recently, he had Converse knocking at the door of his very lush, very private studio that sits in the courtyard of LA’s Hollywood Roosevelt Hotel.

Converse asked Dr. Woo to take time away from drawing on humans to lend his lines to their most popular pair. The collaboration has resulted in a successfully decorated line of Chucks, available in black and white, that feature Woo’s signature spiders and webs.

We managed to pinch some of his valuable time to chat tattoos, LA style, the Chucks legacy and his collab with the brand. 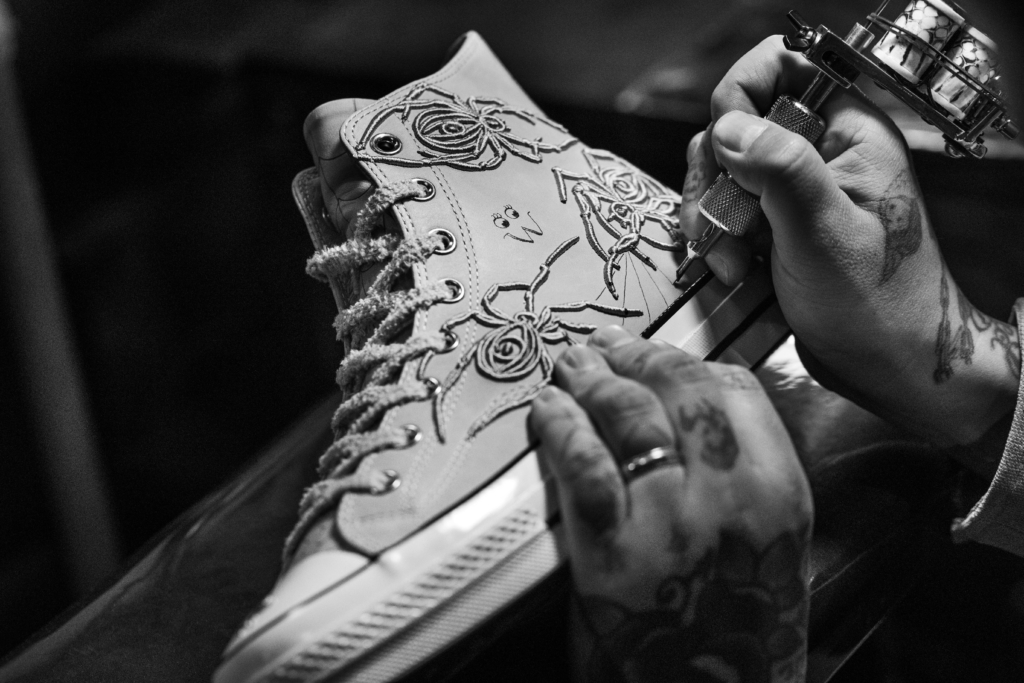 You said you wanted to create something that wasn’t expected of you. What do you think people might expect from you, and how is what you’ve done different?
For me, being a visual artist, everyone expects you to carry your craft over into different realms in the sense that you’re sticking to one technique. And I get it, this is what put me on the playing field, but I want to show that I have a broader spectrum with my thoughts. So I didn’t want to just draw some stuff and have them print it on shoes. I’m a fan of designers, so I wanted to bring more too it than more than just a drawing. So we did something a little different, a little more stylised. what I love about the shoe is how it wears and the story that comes with it. Also, we did some exclusive pairs made of leather that I actually tattooed on.

Did it feel different to human flesh?
Yeah, definitely!

Your actual approach to tattooing is pretty unexpected. You’re a tough looking guy, but your work is quite delicate… Why?
[Laughs] Well tattooing started out for bikers and outlaws, so that toughness is the perception of it. But now that it has progressed, it’s like food with different cuisines. There’s bold stuff, watercolour stuff, and fine line stuff like what I do. At the end of the day, when starting doing what I’m doing, it wasn’t something new to the tattoo world but it was new to the… I don’t want to say the world, but it definitely put a spotlight on this style. I like attention to detail and I just gravitated towards that style.

Do you think this idea of tattoos as a sign of strength or symbol of an outcast is outdated?
Um, no, not necessarily, because there are still tattoos that you can get that put you in that category. But if you’re going to get a dolphin jumping out of the water with a rainbow, I doubt that you’re going to be classified as a rough character.

I read that you started tattooing because you were rebelling against your parents. What kind of future did they want for you?
As any first generation kid from parents that immigrated here, especially traditional Asian parents, they wanted the four-year college, the doctor, the lawyer. Something that was safe and provided job security. They just want what’s best. But that just wasn’t my vision.

Are they eating their words now that you’re famous? Are they cool with it?
[Laughs] You know, I think they’re more pleased that I became a father and had a family. And this, my career path, has provided that. And that makes them perfectly happy. 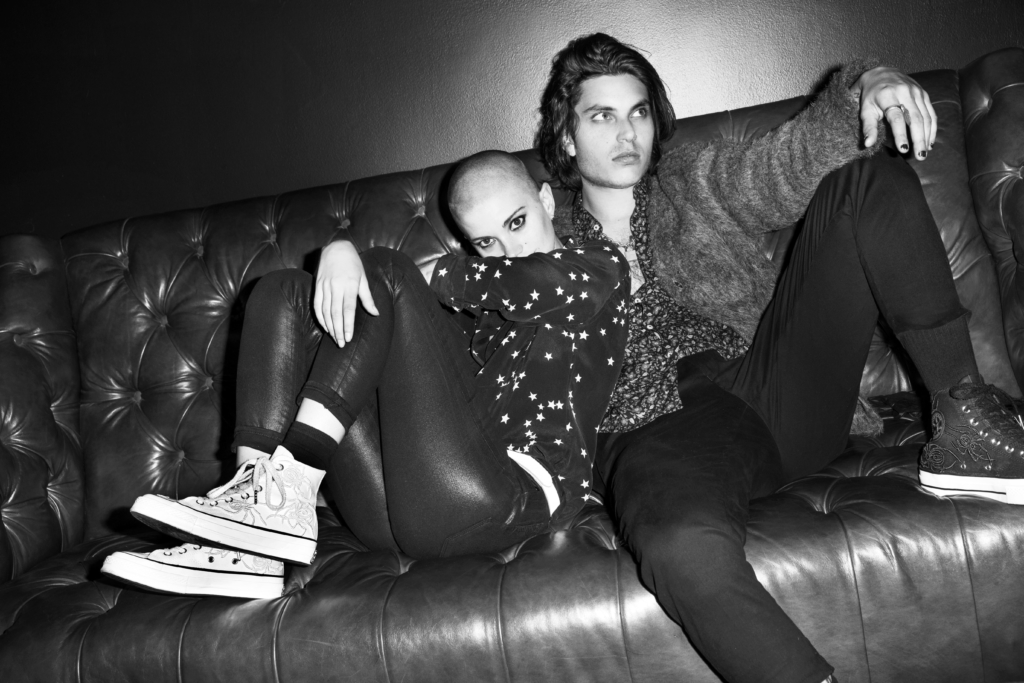 You’ve tattooed loads of celebs, including Drake and Zoë Kravitz… who was the most nervous?
As a rule I never talk about any of my clients.

We kind of just want to hear about Drake being a soft little baby…
Ah no, he’s great. He’s a great guy.

Have you been tattooed by anyone famous? I imagine as a tattoo artist it must be like collecting…
Yeah, I got into tattooing because I was a collector. I was fortunate enough to be tattooed by my mentor Mark Mahoney and then he offered me an apprenticeship. All the guys at Shamrock Tattoo, those are the legends that I was fortunate enough to collect tattoos from and to learn from.

Did putting your artwork on a pair of chucks come naturally? Did it feel like tattooing a foot, being cautious of the placement?
Well I had to be careful not to drip ink onto them, that stuff stains. But it did work out just like skin, just a little bit harder.

I imagine it’s like being a kid and drawing on your Chucks…
Yeah, I was always drawing the Stussy ‘S’, 8 balls, webs. It kind of inspired what I do now, I do a lot of tongue-in-cheek stuff like webs — it’s youthful and playful and reminds me of things that I thought were edgy when I was tapping into my darker side. 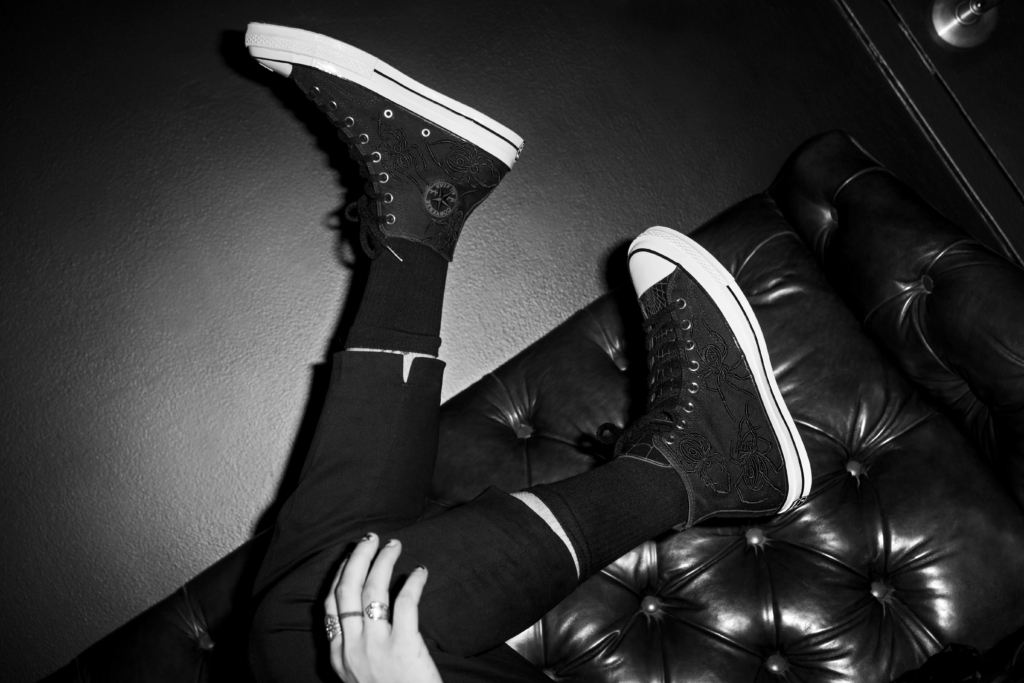 In regards to LA style, I feel its only recently that LA has been credited with as much style as somewhere like New York. What do you think is provoking this?
LA has always been a creative hub but in the past few years I’m seeing it more and more. A lot of factories are moving Downtown and young kids are becoming designers. It’s a reflection of the times, a lot of young kids are growing up to be creative directors and designers. When I was a kid we were just skateboarders or wanted to be indie musicians. Now, every kid around that age wants to be a fashion designer. You never really saw that many young dudes wanting to do that. But it’s driving the market and pushing people. And, now, a lot of big designers actually live here — there are prominent men’s brands coming out of here. It used to be tee shirts and jeans, now it’s a little more avant-garde. It’s cool.

Yeah, I know a few visual artists who’ve moved there because there’s more room — which translates to more wall space in homes and people then being actually able to buy more art…
Crazy!

A good pair of chucks tells a story, and so does a good mentor. What’s the best story you’ve heard from your mentor Mark Mahoney?
Woah, all his stories about tattooing Sid Vicious and dealing with sketchy criminals. It is a seedy underworld but it’s also a luxury service. Stories about that are pretty cool.

You’ve been quoted as saying you’re ready to extend yourself into other creative fields. I mean, you’ve basically just done footwear, and you used to work in fashion… what’s next?
I have a few projects coming up this year but nothing I can talk about fully. Right now I’m meeting people and collaborating when it feels right. Converse is one of those things thats the fabric of personal style — you dictate where the story of that piece goes. As apposed to buying a Saint Laurent biker jacket, you just become that guy… not that that’s wrong, I have one. But you can buy a second hand pair of Cons for $3 and they can become priceless with the way you wear them. 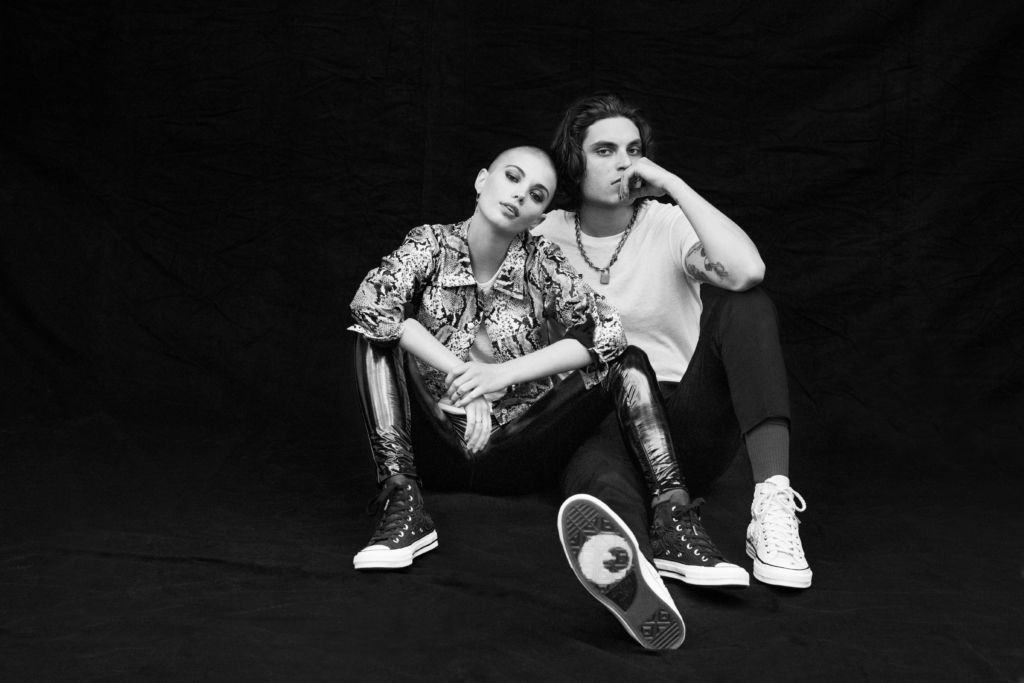 Converse x Dr. Woo will be available globally from Converse.com and select retailers beginning January 20, 2018, for a retail price of $180.00.