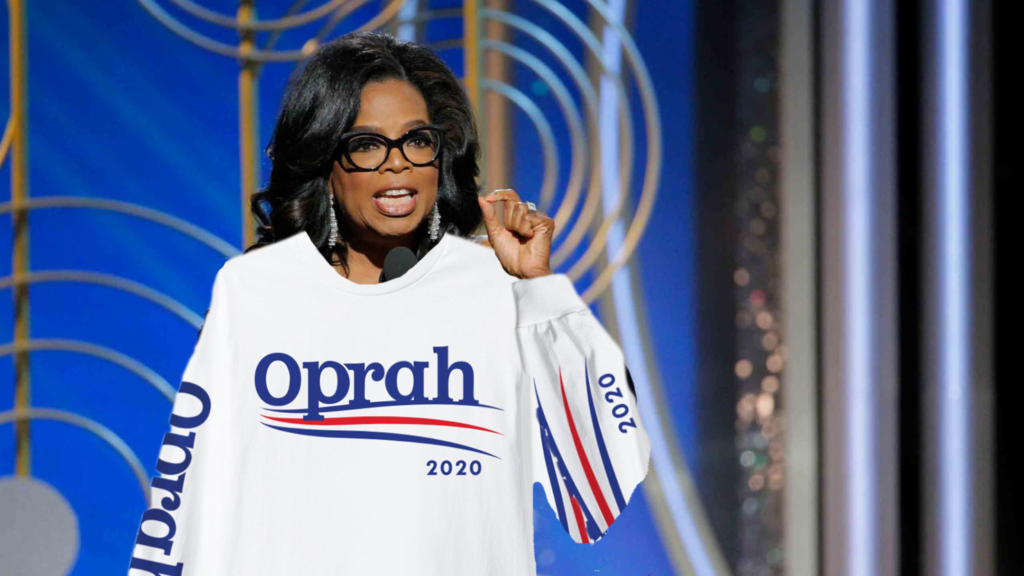 ICYMI Oprah Winfrey gave an acceptance speech at the Golden Globes after receiving the Cecil B. DeMille award and people were shook. She took down Hollywood and the power-hungry, predatory d-bags that inhabit it, and then everyone decided that she should run for President in 2020.

Talk of her eventually running has been circulating for years. I mean, after all, the only thing more Merica than Trump as Pres would be Oprah as Pres. And we’re down!

So down, in fact, that when we found out someone made some Oprah 2020 merch — Bernlenciaga vibes of course — we decided it would only be correct to spend at least a portion of our rent money on it.

Like many of you, we LOVED Oprah’s speech. She provided a voice for people like you, me and everyone else who more than ever have felt... Invisible. Her speech was so eloquent yet chilling at the same time, giving me goose bumps the whole way thru AND like many of you, the thought of Oprah on the bid for 2020 got me all giddy BUT at the end of the day, I think we all know it’s simply wishful thinking BUT a girl can dream, can’t she?! lol Seriously tho, let’s follow in Oprah’s footsteps and let’s come together to continue the fight for change, battle injustices and pay tribute to all the women who’ve faced their own #MeToo moments.

If you wanna, you can cop here.