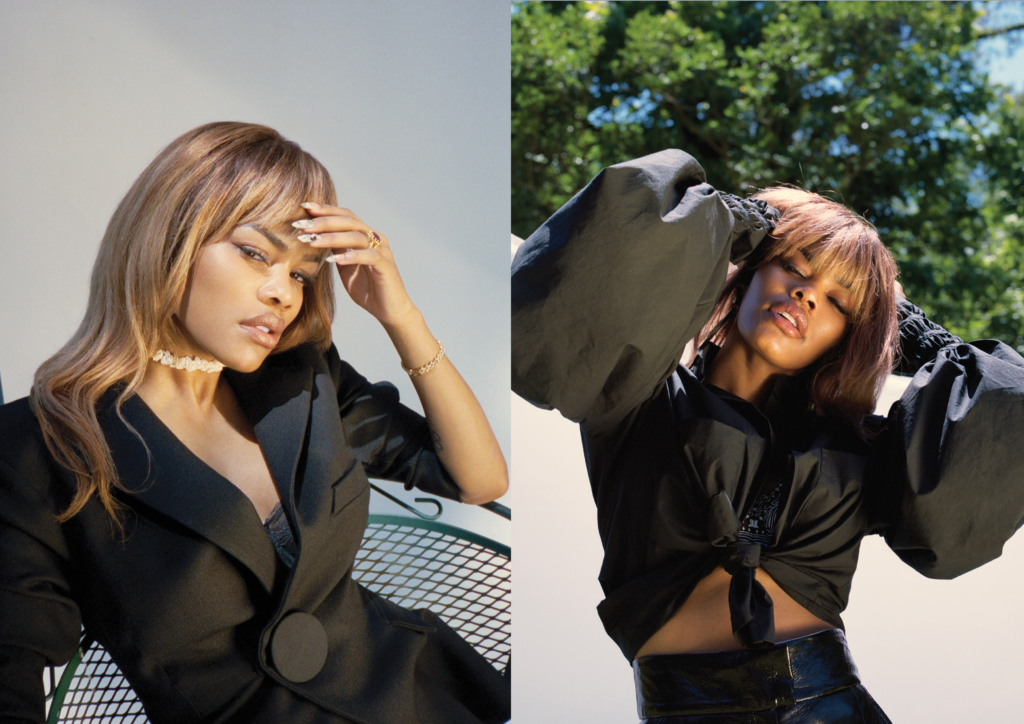 Teyana Taylor is unequivocally the hero we need but don’t deserve. This is evident in her first reality television appearance on MTV’s My Super Sweet 16 and perpetuated further through her king-sized achievements as (deep breath): a recording artist who is currently signed to, and about to release a record with, Kanye West’s GOOD Music; a credited writer and collaborator on huge records for guys like Omarion and Usher; a New York Fashion Week highlight and power strutter; an incredible dancer whose moves cut through time and space (that choreography on Beyoncé’s ‘Ring The Alarm’ is Teyana’s btw); a featured artist on My Beautiful Dark Twisted Fantasy, which she landed by lowkey forcibly letting Kanye hear her hum to the tracks; a filmography that you can barely count on two hands; a record for the fastest selling Adidas Originals sneakers in history; and a soon to be, once again, reality television icon thanks to her new show Teyana & Iman. And that’s just professionally. In her personal life, Teyana is an incredible mother to her glowing babe Junie, a crusader for real deal love and a person who is sexy all of the time. When you get right down to it, Teyana is the best vibe. Look and listen…

Jason Crombie: Recording Artist, Actor, Choreographer, Dancer, Wife, and Mother. What’s your secret for balancing all that, and how much sleep do you get each night?
Teyana Taylor: There’s no secret! But you definitely need balance. I sleep whenever I can, if I’m not working I’m spending time with my baby, my husband, friends and fam. I never calculate the hours. Sometimes only two hours but duty calls.

How’s the new album coming along?
Great! The album is actually done, just waiting on some minor tweaks and whatever last minute switches or edits and a green light from Kanye and should be good to go.

What’s the storyline, what’s the pace, what’s the listener going to be doing as they hear it front to back?
Mr. West is EP-ing my entire album — you guys will just have to wait and see what magic he’s created! 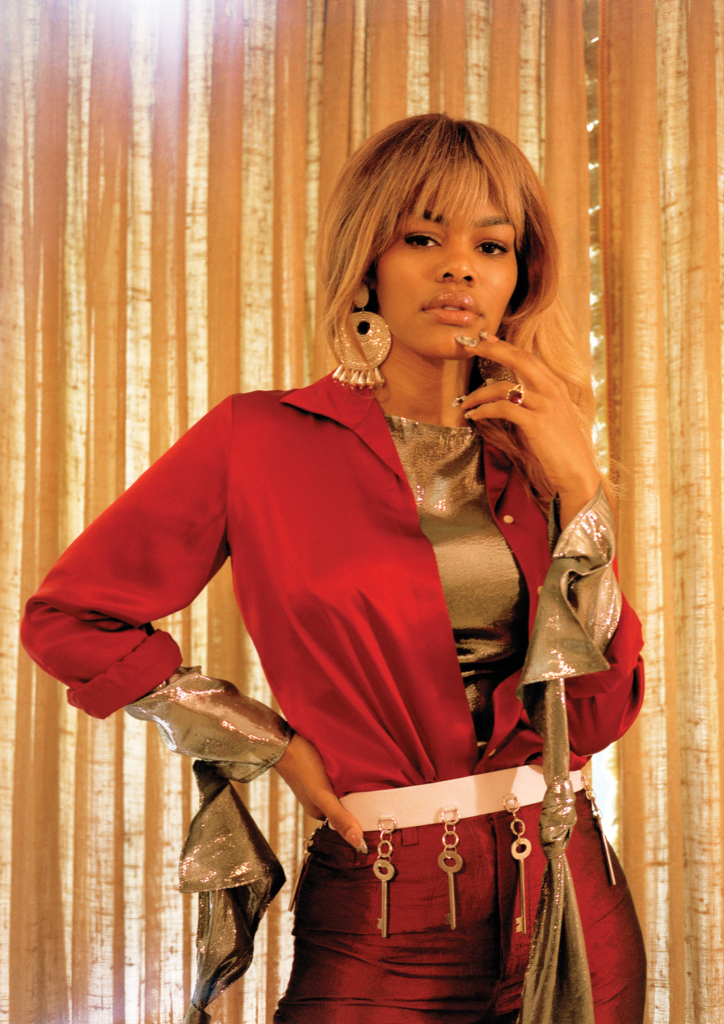 If you could only listen to one record for the rest of your life, what would it be and why?
That’s a hard question. I love music too much to live without it. I don’t know if I can live with only one song. But if I definitely had to pick, it would be Michael Jackson ‘Liberian Girl’.

You and Iman have been described on more than one occasion as “the world’s sexiest couple.” What do you think of that?
It’s dope. It’s definitely an honour but flattering at the same time because we both play entirely too much.

Are there times when you and/or your husband ain’t sexy at all?
Hmmmm… nope! Gotta be sexy even while eating a 40 piece lemon pepper chicken wing!

Are you guys being sexy right now?
Lol I would not say so right now — I am chasing Junie around the house so she can get in the bed.

Your daughter was born in the bathroom of your home, delivered by your husband. What happened? What was going through your mind when your water broke?
OMG — a pair of shoulders are about to come out of my vagina!

Did Iman for real tie-off your daughter’s umbilical cord with a Beats by Dre cord, and did you keep it for posterity?
Yes he did! The phone operator told him to do it… and we did not keep either of those cords lol.

Do you think she will follow in your footsteps and become a musician?
Maybe. She loves karaoke and playing keys, but she also loves basketball as well. Honestly, I can’t predict what Junie will be-come because she’s so diverse at such a young age.

How has being a mother changed the way you work?
I go harder of course, I don’t play any games nor do I take shit from anybody. I have more important things and people to live for and that’s Junie.

Has being a mother inspired you to work harder?
Absolutely! You always want the best for your kid. If they see you work hard, hopefully it will motivate them to go harder and pass that to another generation.

What do you hope your daughter will inherit from you?
My six pack abs lol.

What do you hope she’ll get from Dad?
His height.

Can Iman easily lift you above his head and, if so, does he sometimes put you in high up places when you’re arguing?
He sure can. He can lift me with one arm. But when we argue we are in full out debate mode. We both wanna get a point across at the same time.

Who could beat you in a dance off?
Nobody!!! I’m accepting all challengers.

What would you say to thirteen year old you if you went back in time and found her?
I was riding skateboards and BMX bikes, and I was OK with that.

Have you ever fantasised about working with someone and then you did?
Yes, I’ve had the opportunity to work with so many greats. Except for Janet Jackson — but hopefully that day is coming very soon.

Pretend she’s reading this… what’s your idea, what are you doing together?
Hmmmm, I haven’t really come up with the exact concept yet. I’ve been kind of overthinking it. She’s my idol, so it would definitely have to be worth it.

You were on ‘My Super Sweet 16’ and it is legitimately glorious. Are you nervous about Junie’s 16th? Are you already saving for her gifts? Who’s performing?
Lol! I haven’t really thought that far ahead yet! However, Junie is so ahead of her time, she might want to perform at her own Sweet 16.

Speaking of reality TV — you’re back on and you must be excited! Is there anything that you’re really nervous about sharing with the world?
No, not really. Our show is going to be very family friendly. It’s based on love and also showing the world that we too are just regular imperfect human beings.

What are some of the most hectic things that went down during filming?
The long hours of filming and pickups. Other than that, it was really pretty cool.

In the promo you say the show is to “inspire love” — why do you think love is especially necessary right now?
To me, love has always been necessary, not just at the moment. When you think of the opposite of love, there’s only hate. We can’t have that. Never could, never will!

How’d you get so brave?
I was raised to always stand up for what I believe in, even if it’s not always the popular vote.

And, what’s the biggest risk you’ve ever taken?
Maybe motherhood in the midst of a budding career. You never know what can happen.

How do you celebrate success?
By thanking God every day for all of the blessings that have been bestowed upon me.

What’s next for TT?
Stay tuned so much coming that I’m excited for you guys to see. More sneakers, more fashion, more movies, more tours, just more everything! 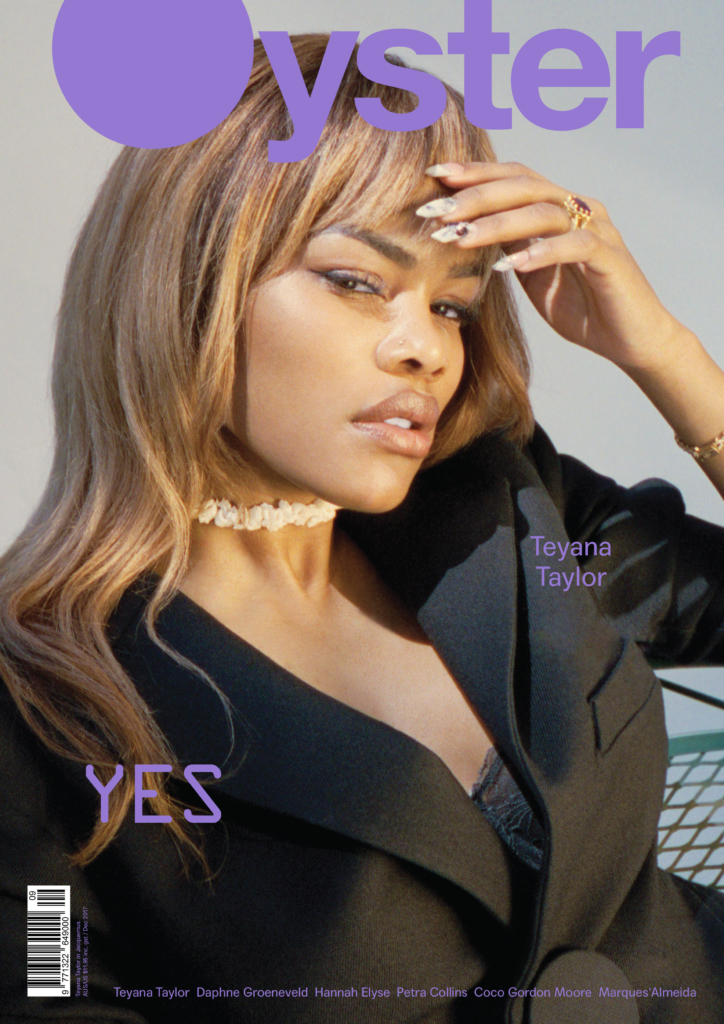