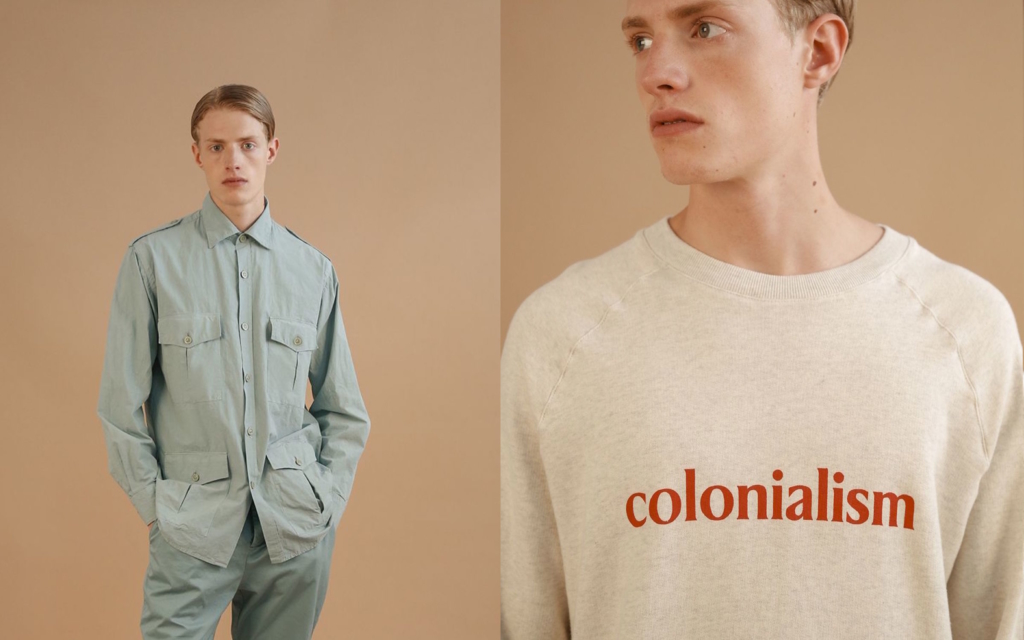 Ok, so there’s a Milan-based menswear brand called Big Uncle and their SS18 line is called ‘Colonial Deal’. Knowing that this is 2018, you’re probably thinking that this collection is going to be clever and honest and a continuation of some of the conversations that are ripping through your social circles right now. But, nah. According to the label, this collection is: “A short and an intense journey in the West former colonies in order to understand the Colonial style. The Big Uncle man of SS18 proposes the Colonial Deal, what the eyes, the sense of touch and mind recall of those places.”

…Recall. Recall? As if colonialism is as distant and romantic as riding to the corner store at age 13 to buy ice creams and have them melt to your elbows. Recall? As if not to acknowledge that so many people currently live in countries that have been colonised.

“Forms and volumes intertwine like the East’s and the West cultures; the colours are warm like the cities, soft like the sunsets, dusty like the dirt roads. As persuasive are those places the linen is rough like the faces consumed by the sun, the military colors and the leather are a soft suede. The garments, whether they have different weights and consistencies, whether they are rough or delicate, remind us of our emotion, of our Colonial Deal.” Ok, but, when does the bit about oppression and genocide come in?

Spoiler: it doesn’t. And you’d best believe the model is blonde and white.

Recently, a petition has been created to urge the removal of the collection. Mireille Harper is behind it and says: “This clothing is a direct embodiment of a systematic legacy which has historically robbed millions of people of colour of their equal social dignity, and by turning this product into a luxury item, the brand is thus capitalising off the notion of racism, and not addressing nor removing any obstacles of the economic or social nature which has constrained the freedom and equality of the millions of citizens who have been affected by colonialism, therefore going against this legislation.”