Lindsay Lohan must be consulting her/our dream journal, because last night she shared a whopper and wasn’t afraid to tag all the right people. She posted a picture of The Little Mermaid’s Ariel and Ursula and penned the confession: “My dream role with #merylstreep” and tagged Disney Studios. 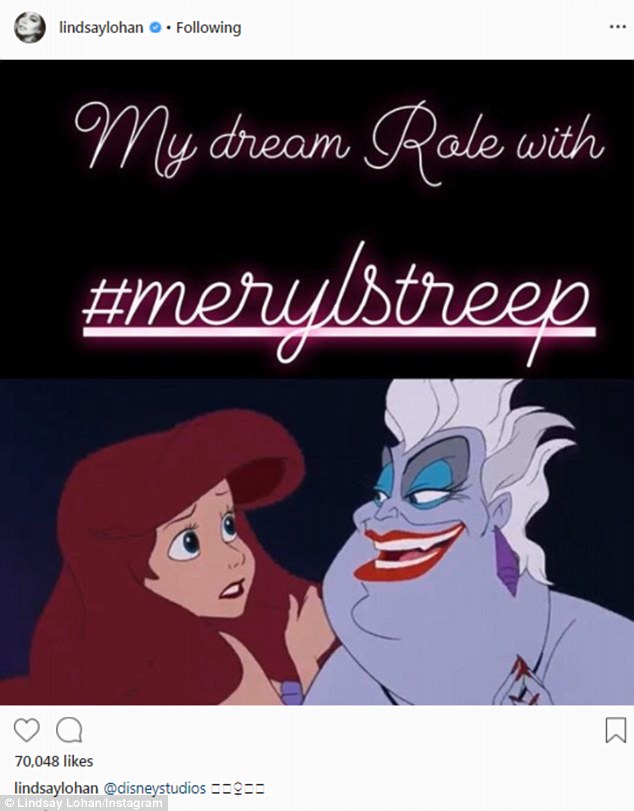 The post has now been deleted, but lives on forever in screengrab land and in our and Lindsay’s deepest desires and also in her stories highlights filed under Disney. It joins another deleted post about mermaids, made back in February 2017, where Lindsay said she wanted to play Ariel in a Bill Condon-directed remake:

“I will sing again, as #ariel #thelittlemermaid,” she wrote. “@disney approve that #billcondon directs it along with my sister @alianamusic singing the theme song for the soundtrack. also @kgrahamsfb plays Ursula. Simply because, she is the best. take one. @disneystudios.”

This time around, she didn’t quite specify if it was the Ariel or Ursula role she was gunning for. And, while the red hair thing makes for an easy assumption, we’d quite love to see Lindsay as Ursula and Meryl as Ariel in what would be a subtle Freaky Friday crossover situation.