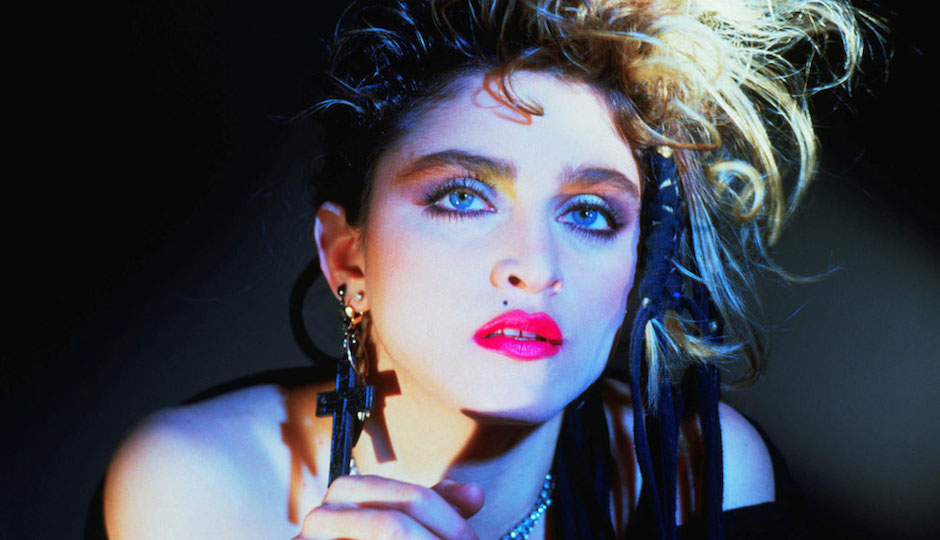 Madonna, an icon, has made some absolutely incredible fashion decisions during her scandalous career. She is, after all, the mother of reinvention. In 1983, the time of her debut Madonna, her signature look was crucifixes, heaps of them, heaps of other necklaces, and lots of lace. Not forgetting the detail of her Boy Toy belt in ‘Like A Virgin’.

In the late 80s it was power suits and hunk hair in ‘Express Yourself’ and, by the 90s, it was Blond Ambition and that Jean Paul Gaultier corset. Plus a Monroe moment at the 1991 Oscars, a totally tits out moment on JPGs runway in 1992, and everything that has happened in between and thereafter her ‘Hung Up’ disco phase in which she refused to wear anything but fishnet tights as pants. BLESS YOU MADGE.

And bless instagram from giving space to @MadonnaOutfits — a relatively new account detailing some iconic and potentially rare fash moments from Madonna, while also providing the runway looks that match and often a side of trivia. Take a bow, whoever you are.

Madonna wearing a 1998 F/W Blumarine silk beaded and embroidered black tunic in late May(?) for the Rolling Stone magazine photoshoot. Madonna was photographed by David LaChapelle. Skirt by @jpgaultierofficial Jet chocker by Christian Dior Couture Styling by @ariannephillips Hair by @orlandopita Here's an excerpt from the July 1998 Rolling Stone piece entitled 'Madonna's Indian Summer' written by Madonna herself: "When I think about what a summer song is, at first I think of something celebratory and up – but that’s not really quite it, because I’ve dug some pretty incredible summer songs that weren’t. But it definitely has to have a phat groove. It’s not about Enya in the summertime, you know what I mean? For example, “Don’t You Want Me,” by the Human League, reminds me of the early days of Danceteria, in New York. I lived on the Lower East Side, at Fourth and B, in a tenement apartment – without air conditioning. I didn’t have a record deal yet, but my demos were hot off the press, and I used to go to Danceteria every weekend, trying to meet the DJ or an A&R person to give my tape to. I’d spend all night on the dance floor in some hideous outfit while all the pretty, skinny, fashionable girls threw their drinks on me. But when that song came on, I forgot my humiliation. I didn’t care that I was soaking wet and didn’t have any friends. Prince’s “When Doves Cry” was another song I used to escape into when it first came out. By then I did have a record contract, and I had moved to a nice loft on Broome and West Broadway. But there was still no elevator, so I had to walk up six flights of steps to get to my loft. I rode my bike everywhere, with a Walkman and headphones on, and one hot summer day I came in and I just couldn’t carry my bike up those stairs one more time. I was hating my family and my life at the time, and I just collapsed in the stairwell with that song playing in my headphones, crying my heart out and feeling incredibly sorry for myself." #madonna #blumarine #rollingstone #rayoflight #india #fashion #style #icon #queenofpop #madonnacollector #madonnafashion #madonnastyle #madonnafamily #madonnacollection #madonnaforever #madonnafans #madonnaworld

Madonna wearing a 1998 Ready-to-Wear S/S Jean Paul Gaultier jacket in New York during a gig at the Roxy on February 14th. She wore the same jacket for the Frozen video, which was shot in the Mojave Desert (Cuddeback Lake) between January 7th-11th. P.S. Gaultier's 1998 S/S collection is arguably the best collection to come out that year. Do yourself a favour and check it out! #madonna #jeanpaulgaultier #gaultier #rayoflight #frozen #fashion #style #icon #queenofpop #madonnacollector #madonnafashion #madonnastyle #madonnalove #madonnacollection #madonnaforever #madonnaciccone #madonnaworld #madonnafans #madonnafamily #madonnafan