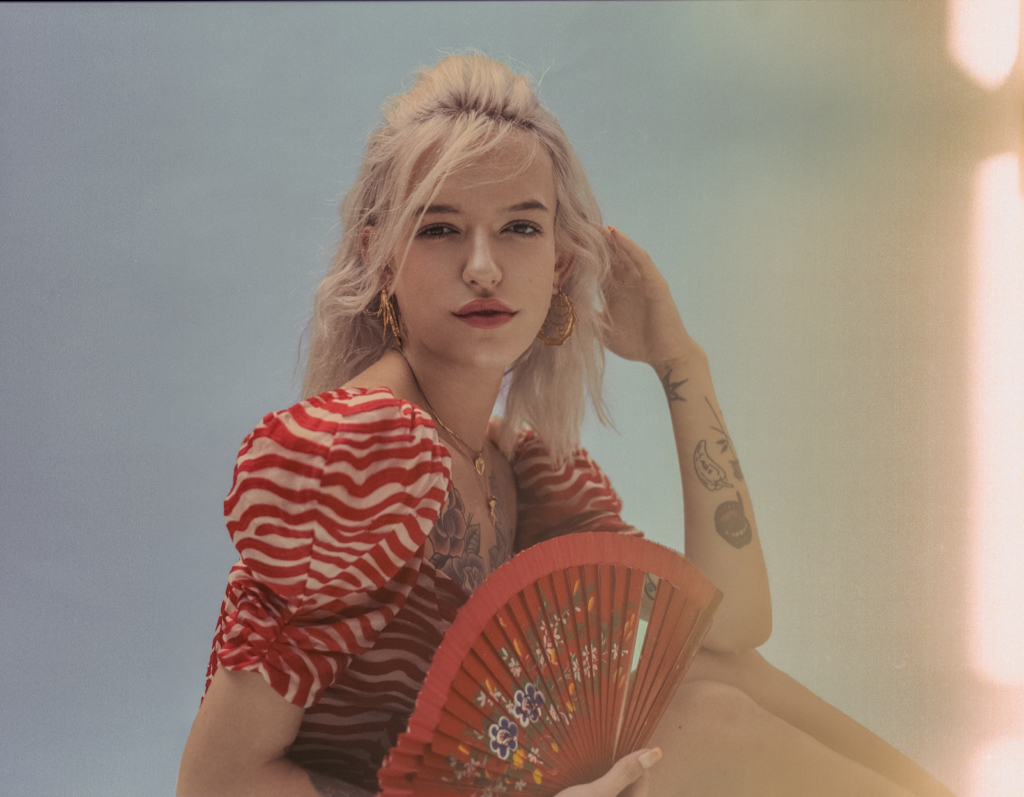 In 2016, Bria Vinaite was surrounded by a cloud of weed smoke, flashing her tats and flogging 420 swimwear — a 23-year-old aspiring fashion designer, moving between Florida and New York, looking for ways to make rent. That is until she uploaded a video of herself performing a frantic cabaret on a suburban lawn, and in what she describes as “this higher power intervention,” film director Sean Baker slid into her DMs.

“I honestly thought it was a joke,” she says about the message. Of course, it wasn’t. Baker had spotted her on his Discover page and immediately cast her in The Florida Project as Halley, the stripper-turned-single mum raising her daughter in a motel. And now she’s everywhere.

“I feel like I owe Instagram a gift basket,” she laughs. “They’ve definitely done a lot for me.”

But at the time, Bria had no idea what was coming. “Everybody was saying all of these things while we were filming like, ‘This is going to be magical,’” she says. “But I just went back to my regular life. No one cared that I’d filmed it. I’m home for a year tell-ing all of my friends, ‘I’m really excited for this movie to come out,’ and everyone was kind of like, ‘Okay…’ No one cared.” Then, overnight, everything changed. Since its release last year, you’ve probably seen — or, at least seen something about — the Academy Award-nominated film and its blonde-haired, ink-covered ingénue, who was plucked from obscurity and de-livered a groundbreaking performance. Everything that you’ve read — teen run-away, unconventional looks, sweetheart stoner, unknown but undeniable talent — is all true. But we’re more interested in who Bria is at the core of all these cues, and who she’s about to become. 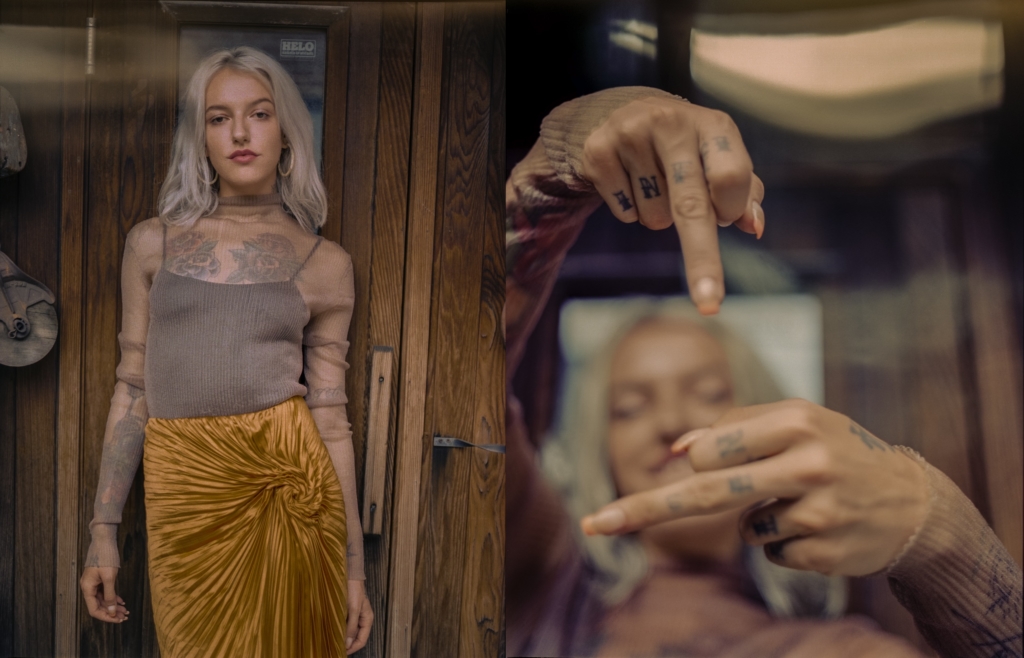 Born in Lithuania, Bria moved to New York when she was in third grade. And because she didn’t know much English, she spent most of her childhood reading. At 18, she embarked on that short-lived move to Flor-ida, where she started designing and sell-ing weed leaf bikinis.

“I had to figure things out for myself be-cause there was no one to call if I didn’t eat, or couldn’t pay rent,” she remembers. “But it taught me independence and gave me this resilience where I know, for a fact, that if every single thing I own was taken away from me today, I’d be fine. I’d figure it out because I’d have to.”

It’s that survival instinct — or maybe it’s the joint permanently poised between her fingertips — that keeps Bria grounded. When she arrives on set for our shoot, she’s calm and sweet, but more than any-thing, she’s appreciative.

“If someone gives me a fucking piece of grass off the street I’ll treasure it forever,” she says, while rolling up a joint. “I just think that no one owes you shit, you know? So, the fact that a human being wants to give me a gift, or spend their day talking to me? Every ounce, every drop of blood, every bone inside of me is just so grateful.” 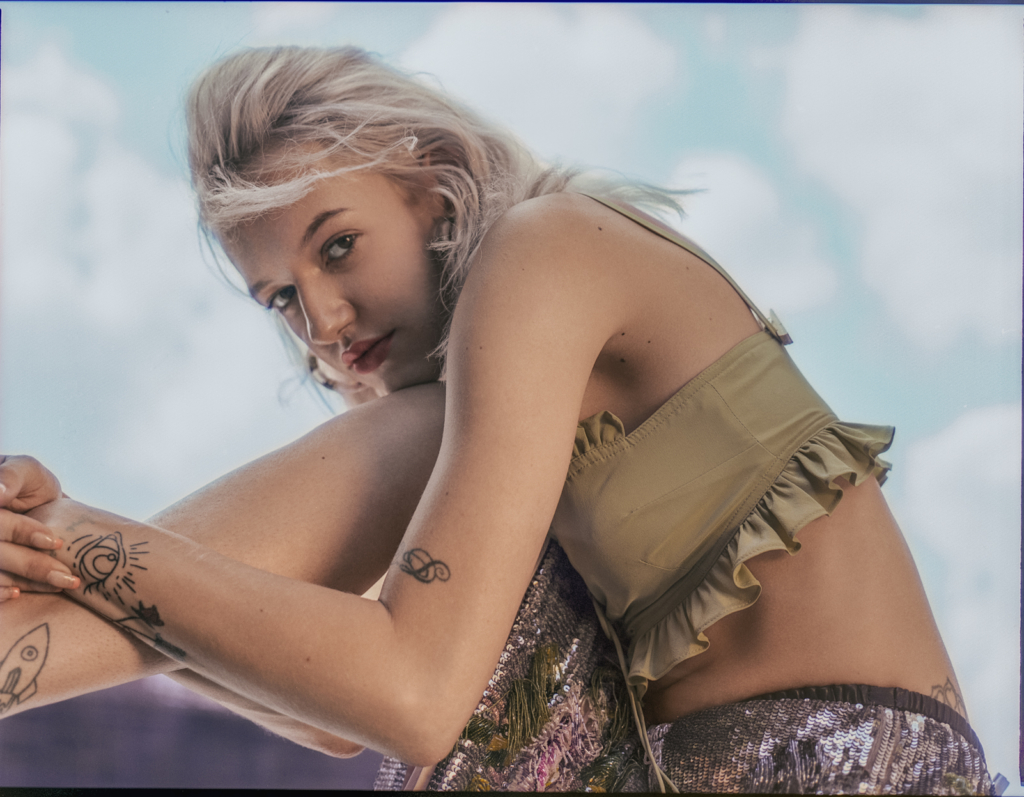 And what she’s grateful for is legit being fast-tracked to a place with some killer opportunities. Since The Florida Project, she’s been invited to, and walked in, inter-national fashion shows; starred in a Drake vid; landed global campaigns with activism messaging for Tiffany & Co. and Diesel; and already has three films slated for 2019-releases — yet she’s decidedly picky.

“At the end of the day, I don’t want the fame,” she says. “I genuinely enjoy the job and the experiences and the beauty of telling stories. I feel like when you care about that more than anything else, who cares about taking jobs unless they’re meaningful?”

With The Florida Project, Bria got both fame and meaning — just not the kind she had initially predicted.

“My favourite part about taking on a role is getting to transform yourself and your mind into a completely different person,” she gushes. “I feel like it’s really showed me to not be judgmental, and just more open to understanding why people are the way they are.” 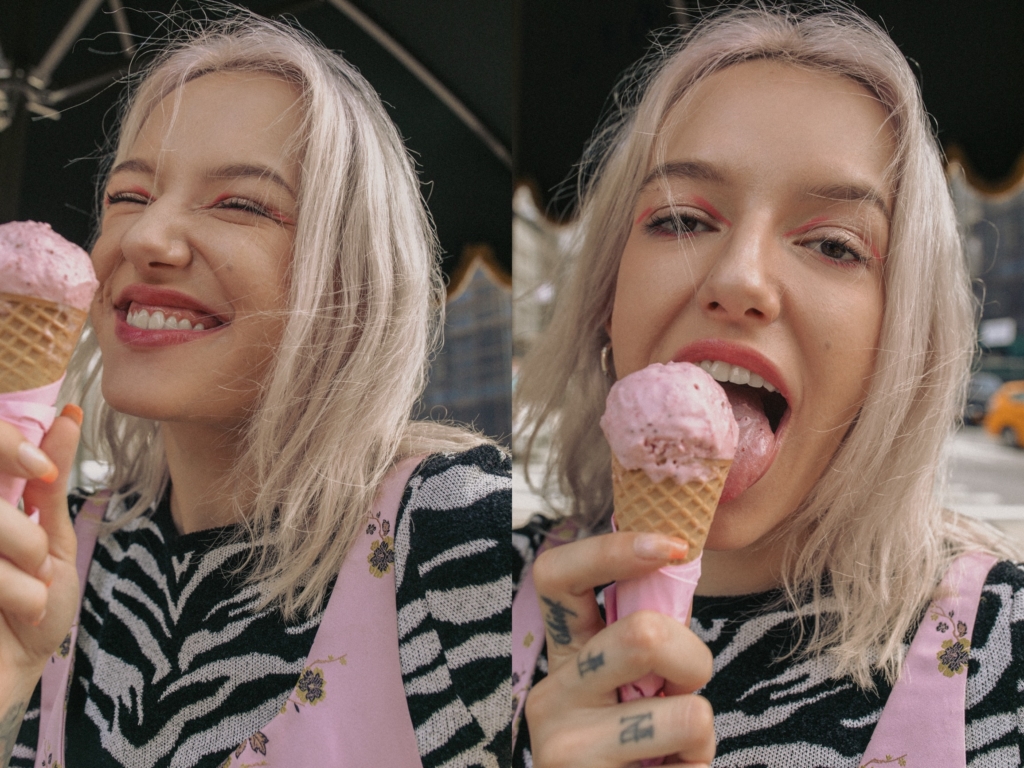 As I watch Bria on set — outside, dancing, or inside, gesturing about rolling up another joint — it’s hard to imagine how someone like her, covered in ink and piercings, ends up in Hollywood and doesn’t keep getting typecast or stiffed at castings. Baker may have helped introduce her to what’s now become her own Cinderella story but holding The Florida Project as an example of what Bria is capable of in front of the camera, I’m certain she would have made it to the ball, eventually, with or without him.

“I do feel like I have to work ten times harder than anyone else just to prove that I deserve to be there. If there’s a girl with no tattoos, who’s been acting for-ever, why spend extra money to cover my ink?” she says. “It’s hard, but it’s also really motivating. I don’t have a choice to not try to be the best at what I’m doing.”

On the flip side, on being cast based on shallow stereotypes, Bria knows exactly who she is — and what she wants. “The beautiful thing is that I have the right to say no to whatever I want,” she tells me. “As much as I enjoy doing this and as much as I’m going to continue doing this for as long as I can, I also want to be mindful of the projects that I’m working on… and if it takes me a little bit longer than other people to find that role, it’s totally fine because I feel like the wait is going to be worth it. Everything I have worked on since The Flor-ida Project, I’ve been really into and really can stand behind 150 percent.”

Besides acting, what she’s doing is using her growing platform to raise awareness about issues concerning mental health, and fighting stoner stigma. Even before she had over 100K followers, Bria has used Instagram as a space to share her struggles with depression and anxiety, as well as how she uses marijuana to cope. Those posts are undoubtedly part of what drew Baker to her in the first place.

“Not every person who smokes just sits at home and eats, and pontificates all day,” she laughs through a cloud of smoke — a truth evident in the way Bria rolls. 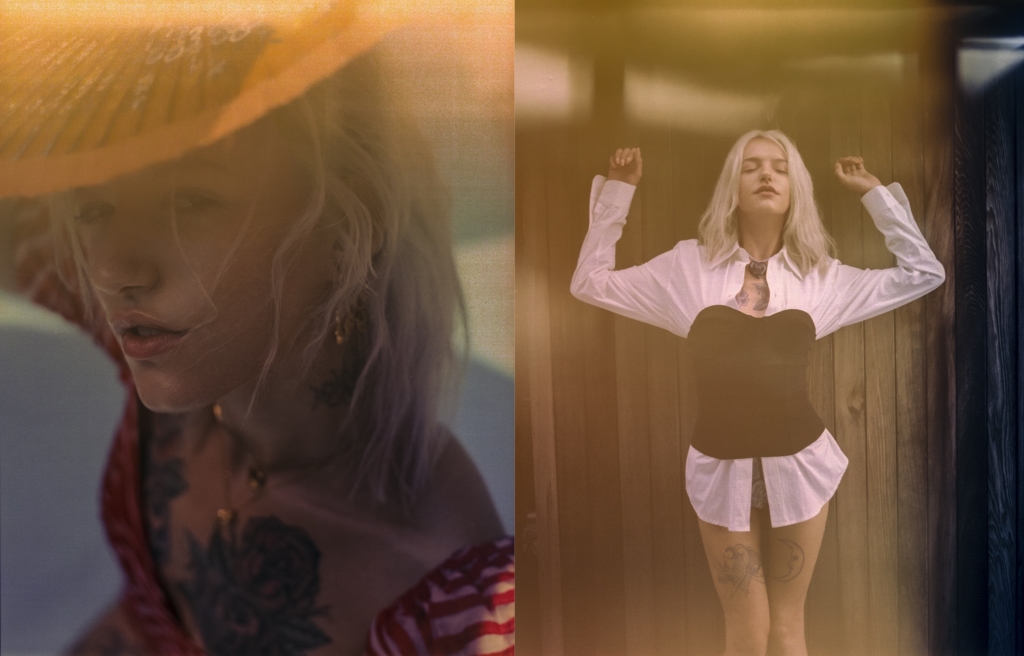 Back on set, she’s active in every part of our photoshoot — from styling, to her hair and beauty looks. She’s polite, and of course, easygoing, but she knows exactly who she is and what she wants. That’s probably why people — myself included — feel like they really know her, having only seen her on social media, where she shares as the smoking, twerking and giggling @chronicflowers. Though, those de-tails are only part of who she is.

“The biggest misconception is that I’m super loud and crazy all of the time,” she sighs adamantly. “For some weird reason, people just assume that I’m always bouncing off the walls and that I’m super high energy, which is the case only thirty percent of the time.”

The other seventy percent?

“I love being at home,” she admits. “I’m a homebody. I think a lot of people thought after The Florida Project like, ‘Oh, you’re going to go to all of these sick parties all the time now,’ but no. I’m still antisocial. I don’t drink, I’m not a party animal.”

But because of her Instagram, and her tattoos, it’s been hard for people to separate what they see on their screens from who she is IRL. To a lot of her fans, she’s Halley, though in reality, they’re nothing alike except “I can definitely relate to being a young adult and struggling to figure out your life,” she says. 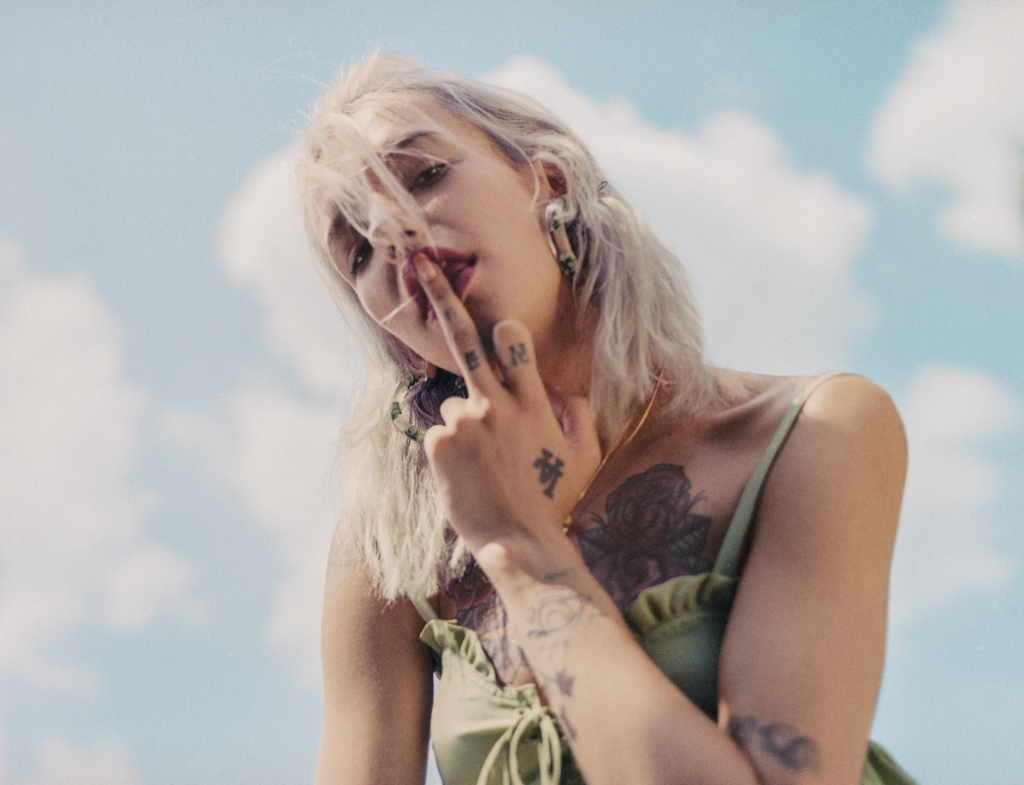 That’s why, alongside the fun stuff, Bria writes honest captions, opening up to her followers about the darker moments of her life. While in the past, feelings of depression and anxiety were something young actresses tried desperately to hide from their fans, she’s part of a new generation of starlets using their platforms as a way to bring real attention to causes that are important to them — on and off social media.

“If I can change someone’s life by making them aware how truly important it is to take care of themselves, then I feel like my job in this world is finished,” she says.

“I feel like my life has been really chaotic forever and ever,” she explains. “I mean, a lot of it was my own fault, but growing up in New York and trying to figure shit out on my own — that was fucking difficult. There were so many times in my life where I thought my life was over and I had zero hope. I went through years of being insanely depressed and it affected all of my friendships and relationships and my whole life — I just couldn’t pull it together.”

“The fact that I’m even still here today — I’m the definition of a survivor,” she says, and I believe her.

But she’s also more than a survivor — she’s a total thriver. Despite her hard slog and real moments of hopelessness, despite be-ing in the very industry that requires you to transform your every being, there’s one thing she’s always been certain about:

“The only thing I’ve ever wanted to be in life is to be myself,” she explains. “So, if I can make other people happy, and be proud of myself for doing just that? Then I’m fucking golden.”